Skip to main content
Log In Register
Intense Tazer eMTB review £6,899.00
An impressive debut to the E-MTB world that delivers progressive geometry and hard riding ability in a carbon frame 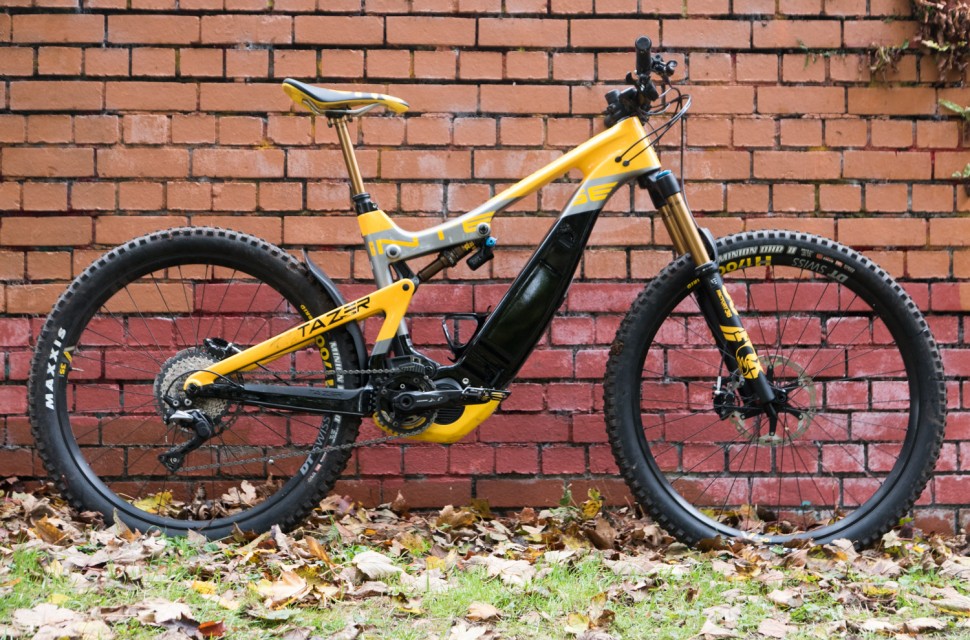 Intense's new Tazer e-MTB is an impressive debut into battery-assisted bikes for the Californian brand, mixing a full carbon frame with aggressive geometry, mismatched wheel sizes and a Shimano drive unit. It's hugely capable both uphill and down but not without a few quirks.

While the name might hark back to a couple of models in Intense's rich history - as well as being a sparky pun to boot - it's the first time the legendary bike brand has created a pedal-assist machine and they're one of the first US boutique brands to do so.

They've taken quite an interesting approach too, mirroring the aggressive geometry of their Tazer enduro bike but using mismatched wheels, with a 29" wheel and 2.6" tyre up front paired to a 650b wheel and 2.8" tyre at the back, sporting a 160/150mm front to rear travel split as well. As ever, the suspension is a variation of the multi-link VPP design but given a specific 'JS Tuned' going over to better suit an e-MTB. 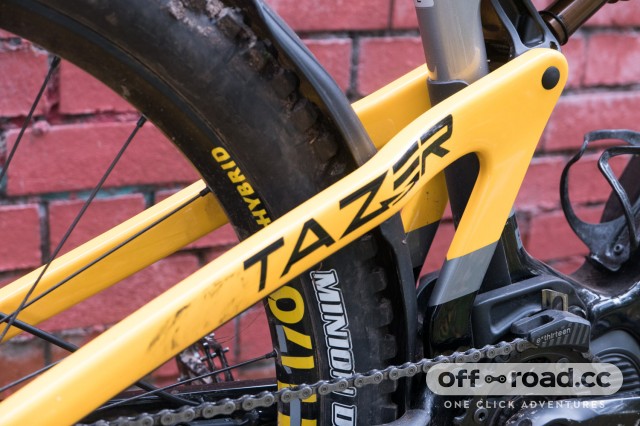 The assistance is given by a Shimano STEPS E8000 unit that'll give up to 250W of extra oomph on top of what your pins can put out, while the 504Wh battery lives in the distended belly of the carbon fibre frame. It's designed to be easy to switch out, the idea being that you can then pack a spare battery in your backpack if you so wish, though buying one is a significant extra expense. Apart from that, the STEPS unit and controls are superb, being small, neat but clear and easy to use. 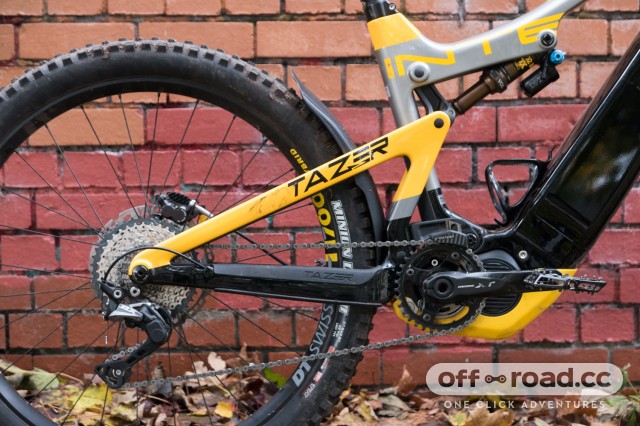 It's worth noting that in the States, Intense is pitching this bike to the motocross crowd more than the mountain bike lot, hence thinking about packing a second battery as the bikes are likely to be de-restricted. Here in Europe, the bike is limited to 25kph in order to keep its status as a pedelec. 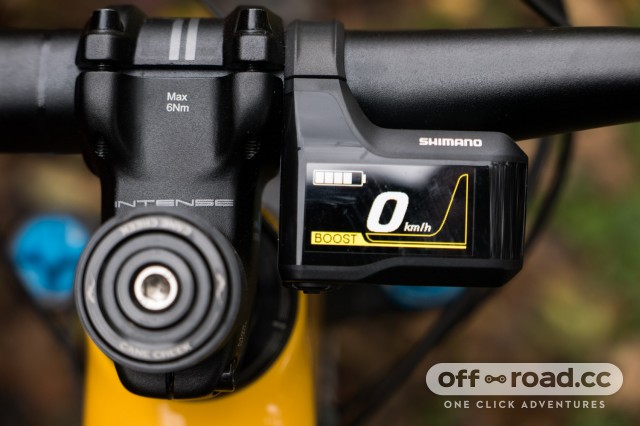 Kit wise, you might feel a touch shortchanged by the fact it's only got a Shimano SLX 11spd drivetrain rather than anything higher zoot but it's decently smooth over the 11-42T cassette at the rear, which provides more than enough range thanks to the muscular motor. The aluminium bar and stem are own brand items, but the 40mm stem is nicely stumpy and at 780mm the bars are decently wide and a good shape to boot. 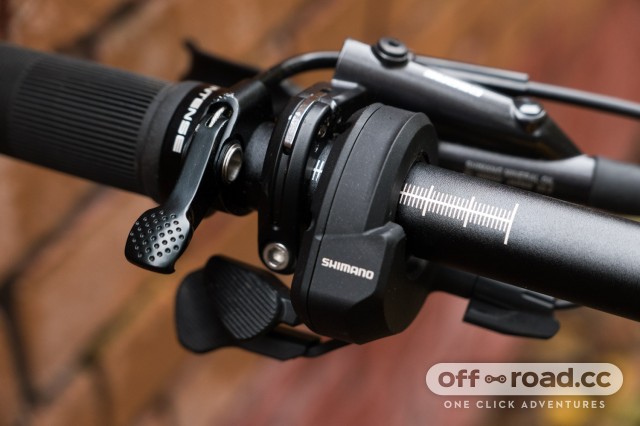 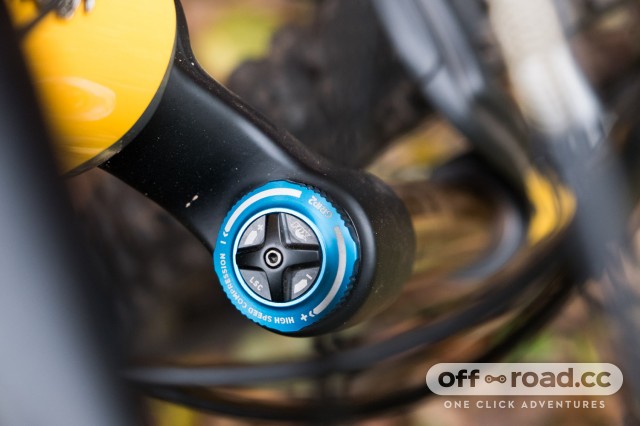 Geometry wise, it's a pretty progressive shape, with a substantial reach of 475mm and 64.9º with a respectably steep 75.4º seat angle to keep your weight forwards on the climbs. I'm 172cm tall and rode the large - I prefer a longer reach - and found that it's spot on for flat out, fast and flowing work, with oodles of stability whether ploughing through the rough or lofting in the air. 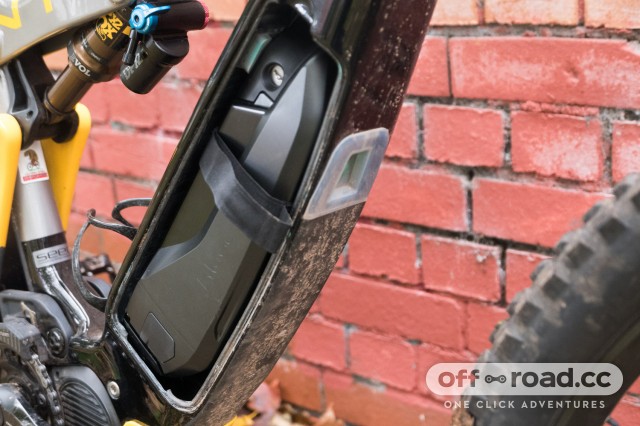 Like most e-MTBs, it doesn't exactly thrive in super tight and twisty stuff, but I reckon that's more a feature of the overall bulk - though 22kg isn't bad at all - rather than the long geometry which means it's much more prone to pushing on in tighter corners, much like the (even longer) Mondraker e-Crafty XR Plus I tested a while back. That said, you've always got the option to size down if your usual trails are tighter than the average. 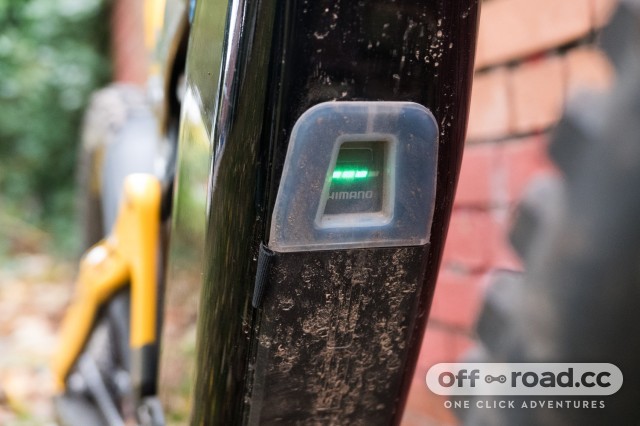 I did find that while setting shock sag and setup was a pretty simple task, balancing the tyre pressures between the two tyre sizes took a little bit more work to get a balance of traction versus tyre roll sorted and breakaway feeling reasonably even between the two ends. The wheels definitely have a different turn-in character - not necessarily a bad thing, but one that does take a bit of getting used to. As ever, the Maxxis rubber is grippy and predictable thanks to the MaxTerra compound and the EXO+ casing proved to be pretty tough as well.

When it comes to taking the hits, the Fox 36 FIT GRIP2 fork is sublime. It's maybe not as sensitive at the start as a RockShox Lyrik with newer Debonair spring, but once it's moving - which is pretty quickly on an e-bike - then it's got class leading in-travel control and support. 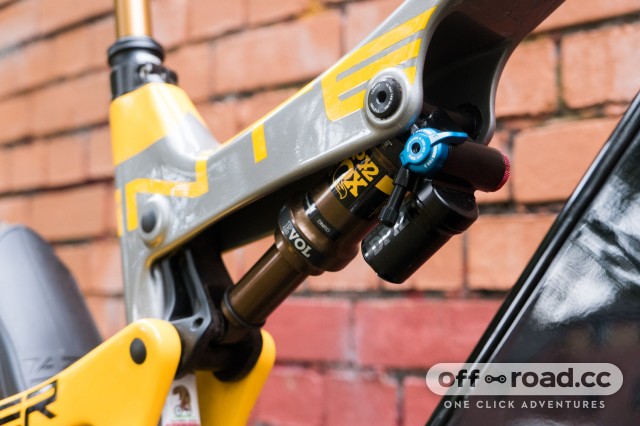 That encourages you to give the bike some real hammer the Fox Float DPX2 shock at the rear does a good job of keeping up, with plenty of progression and support, though I did mess about with spacers a little, adding a slightly higher volume one.

It's slightly strange that Intense has opted for a relatively short 58mm stroke to control the 150mm of travel and the shock was definitely getting pretty warm after 2-3 minute steep downhill runs. How it'd hold up to Alpine-style descents with a rider heavier than my 65kg might be a bit of an unknown, but I didn't notice any serious damping fade on the numerous, rough UK trails I tested it on,

Either way, when you give the bike it's head then it's happy to smash through the rough and it's not an unmanageable handful when climbing or on the flat, thanks to the relatively low weight and seat angle that keep you in the right place. The Shimano motor is smooth, powerful and in Trail mode, gives a very natural feeling assistance, well as much as being 250W stronger is natural. Pop it in Boost and it simply smashes up ridiculously technical and steep climbs, with a very real danger of straining yourself because you're grinning so hard. 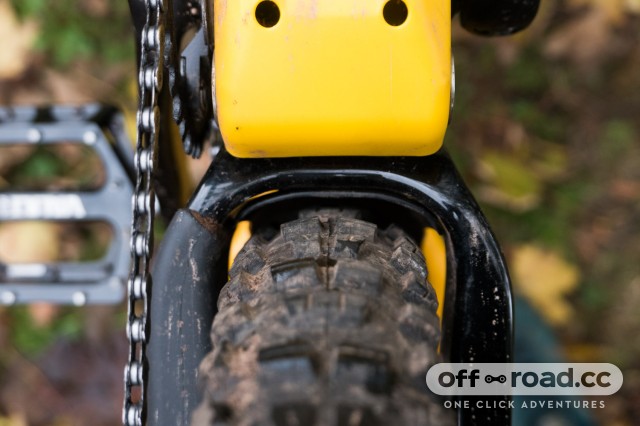 It's not all perfect though. The tyre clearance at the back isn't so hot - California isn't known for mud and it seems to be designed accordingly - and the build in fender doesn't help things in that regard. The through axle at the rear of the frame is an absolute faff to use - it's got a collet style fixture that uses a 5mm key on the non-driveside that needs to be loosened before you undo it from the driveside.

I also had bite point issues with the four-pot Shimano XT Trail brakes, with it moving noticeably outward during descents, though there's no denying the sheer stopping grunt the brakes can offer, running 203mm rotors at either end. No matter how hard I tried, I couldn't get them to fade either. I tend to run my levers very close to the bar so it's generally more noticeable, but have has this issue with some (though not all) Shimano brakes before. 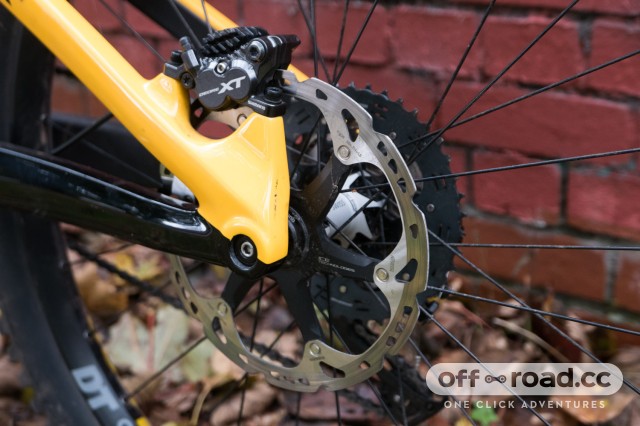 When it comes to value, despite being a boutique brand, the Tazer isn't too much of a credit wrecking proposition compared to similarly specced, carbon framed rivals thanks to their shift to a direct sales.

Okay, it's still a vast chunk of cash by any stretch of the imagination, but it's still reasonably competitive (Canyon's similarly oddly-wheeled top level Spectral:ON is £5,499 for comparison) plus Intense UK are throwing in various sweeteners, such as a comprehensive post-sale setup for your weight and riding style before the bike is shipping. They're also offering an add-on detailed bike setup day with +3 (which include the services of reknowned coach-to-downhill-stars Alan Milway) for customers. 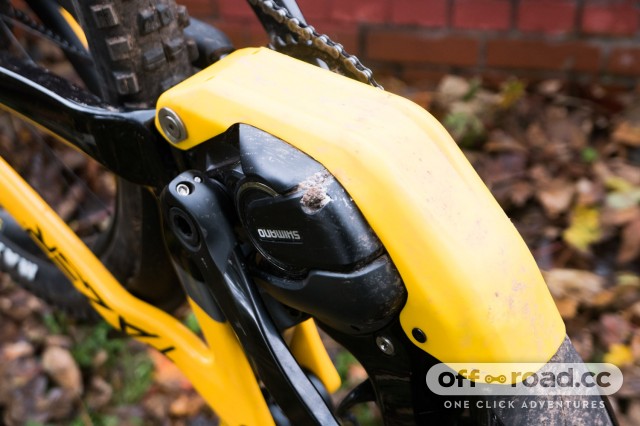 As a debut to the world of e-MTBs goes, the Tazer is mighty impressive. It's an innovative setup in terms of wheel size and progressive when it comes to geometry, both of which can come with a bit of learning curve but it's a solid and well-rounded package that really excels on trails where you can let it run. Add in a top-level spec plus a serious heritage and premium image and - if you squint really hard - it almost offers good value.

Okay, it's not going to set the e-MTB world on fire with new innovation and some might find the looks less than graceful, but the mixture of proven kit with a quality frame and sorted geometry and suspension does deliver the goods out on the trail.