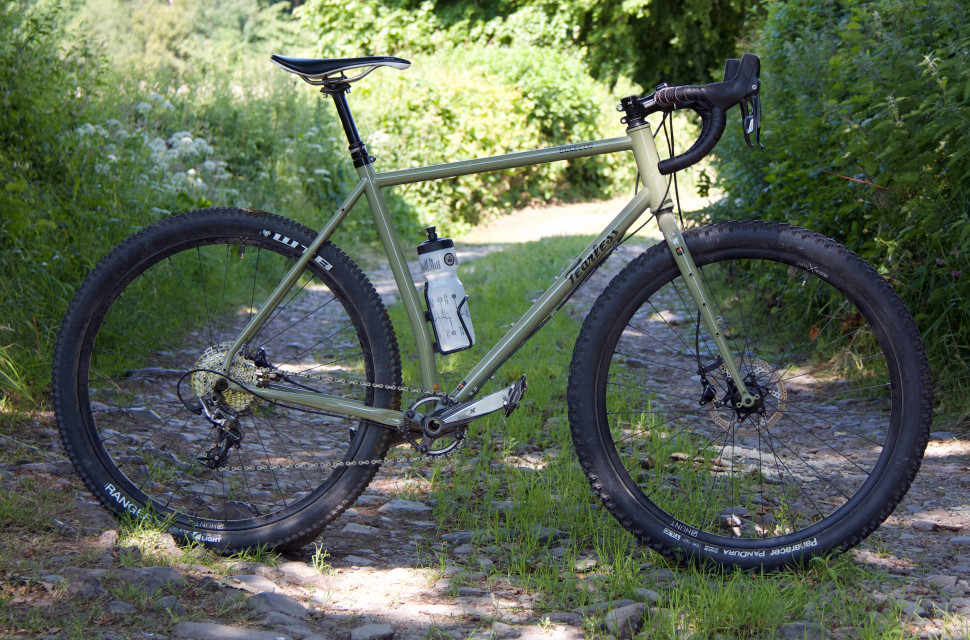 Jim Clarkson
|
Jul 29 2021
|
Overall
Quality
Performance
Value
What's good?
What's not?
Buy if...
you want a frameset for distance, adventure or touring off road on any surface.

The Fearless Warlock is one of the new breeds of all-terrain bikes. Although it has drop bars, it holds its own on many off-road trails and keeps the speed up. The versatile build, thoughtful attention to detail and decent price point makes the Warlock a competitive, different and great riding steel frameset for off-road adventuring. 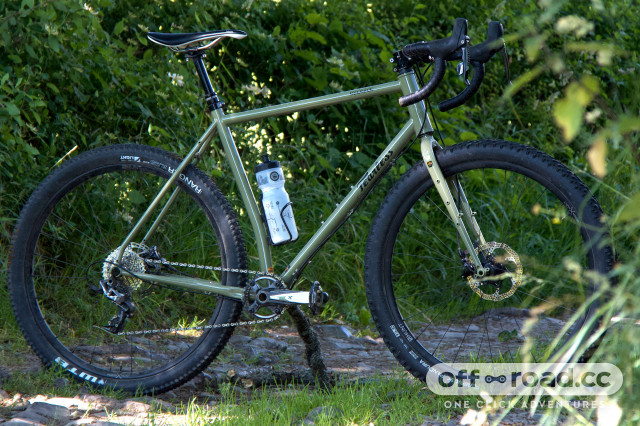 It is built from a blend of custom-butted steel tubing, comparable to well-known branded tubing, with its double butting and varying tube types. The Warlock is a considered and well thought out frame - its no-nonsense, practical, yet, appropriate features make it punch above its price point.

Running over the frame, we have a mix of road and mtb tubing, the latter being opted for the seat post, which is a little heftier to take dropper posts. The welds are clean and well finished and would look at home on higher-priced frames. Frame and fork both use bolt through, non-boost axles.

The Warlock is 1x dedicated. With gear ratios as large as they are with 1x, this never felt compromised and leans into its off-road influence more. As the frameset I tested was built up using a load of parts from the spares box, it helped focus on the frame. The frameset (frame and fork) is 3.8kg in size large (including headset and axles).

There are bosses under the downtube, the usual water bottle doubles, and a triple boss set for alternative positions and other carrying options. Additionally, there's a set on the seat tube, so there are plenty of ways to items to the frame. The rear triangle has mounts for panniers with attachment bosses neatly at the top and bottom of the seat stays; they are sunk into the frame giving a cleaner look. Fender bosses are also included. All the bosses basically. 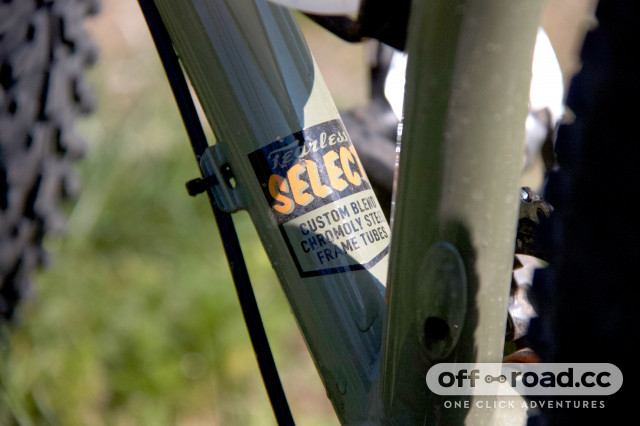 There's a front-facing seat post slot, which helps to reduce mud and muck from creeping in, and mechanic-friendly cable mounts for full-length external cabling for gears, brakes and dropper (the dropper cable neatly enters at the bottom of the seat tube).

The brake bosses are flat mount and easily changed to post mount with adaptors. The inside of the frame is ED coated, which claims to reduce corrosion - this is pretty common for steel frames and aids in slowing any internal damage. The dropout is replaceable and easy to change.

There is clearance for 700 x 47c or 650B x 58c tyres - I squeezed in a WTB Ranger 2.25, and that's about as large as I'd go for clearance - I ran a 2.4" on the front, which is a little over what is optimal. Still, for the terrain I ride, the extra cushioning was welcome. Either way, there is plenty of room for larger tyres.

Fearless supply their 404 Fork, which is Carbon tapered fork ready - meaning other forks that are lighter can be run easily enough without altering the geometry. The forks have a heap load of bosses for all your cargo needs.

Fearless Warlock - ride test and how it feels 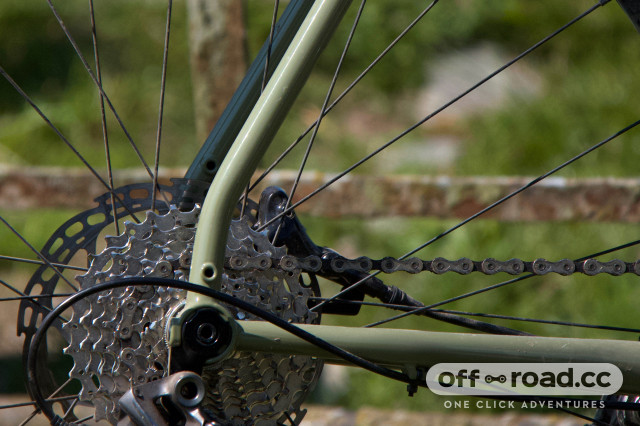 The Warlock has an off-road bias geometry - well, more than a head nod to 90s mountain bike vibes. The 71° head angle and 74° seat angle is what, for me, seem reminiscent of older mountain bikes. With drop bars, you feel planted when riding as the Warlock hums along happily on the tarmac, whilst not being racy, with 700c wheels and light tyres, it's no slouch.

I ran 700c wheels with some gravel centre ridge tyres for a few weeks and then switched up to the chunkier tyres on 650b/27.5 wheels. The Warlock rides perfectly well in both guises - I prefer the larger tyres for the terrain I have locally, and it's an absolute hoot down some of the rockier bridleways, fire road trails and trail centre single track. It's a very immediate ride feel with the rigid forks and drop bars; the handling is nippy enough to remain inspiring without being too twitchy.

In the same vein as the Mason ISO - perfect for long, faster rides on surfaces right up to the point you could want suspension and a dropper, it blurs that line or rather stretches it out. There is always a compromise - the Warlock is not a mountain bike, but it'll take you to many places and make a lot of tamer trails feel brand new. 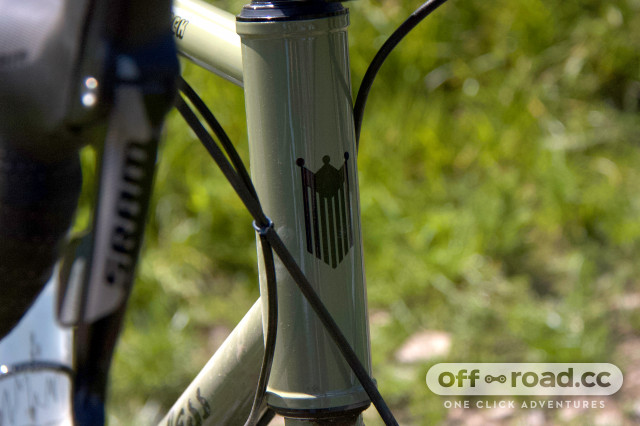 I never felt surprised by the Warlock. It feels very reassuring, with a consistent ride from the start. It felt like a familiar bike quickly, and if I wanted a daily ride that allowed me off-road as well, the Warlock would be perfect for that. It would also be perfect for a long, off-road adventure, loaded up with gear.

It's nimble climbing out of the saddle off-road, especially shod with the larger tyres. I liked the way it felt lighter when climbing. It felt light, but it's not especially light, as a steel frame will always tend to be a little more on the scales compared to other frame materials, but the ride feel is great. Whilst I won't use the term 'magical', the double-butted tubing coupled with the geometry makes the Warlock a comfortable, responsive and fun ride.

I suspect I would suffer very little in mud and clogging on the frame, perhaps with the burliest end that could be an issue, but no more than any traditional frame. I had no problems in the test period with it being unseasonably dry. 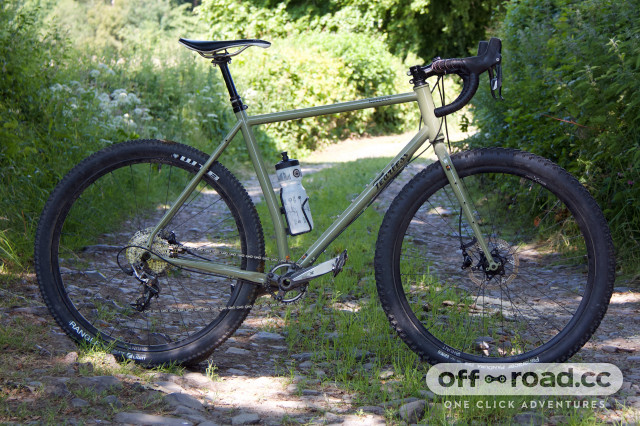 The Warlock is a well-thought-out frameset that allows versatility in its build. It's light and fast, capable of road, gravel or burlier, with a dropper post and big tyres for quick off-road riding. The attention to small details, meaning that the frame and fork both seem more 'boutique' but retaining a no-nonsense, reliable frame that offers a great ride feel.

The consideration that Fearless has put into their second frame is clear (the Vulture being the first), and it shows. The option to build a great gravel or adventure bike with this at the core means if you have a limited budget or a few spares, it's a great option. Saying that, it's equally as deserving of a high-end build.

I would say that there is a slight weight penalty with steel. However, I would have very little concern on the life and strength of the Warlock, and keeping in mind that it's meant for off-road use, the (slight) extra weight is peace of mind. There are two colour options, both subtle and pretty neutral, in Faded Olive (tested) and Cool Grey.

The bike is for a rider who wants an off-road biased all rounder, that can ride singletrack but still be decent on road surfaces.

Yes - the steel frame tube choice coupled with the ability to fit in larger volume tyres made for a comfortable ride. No suspension would limit the extent that off road riding was comfortable.

The sizing was similar to other brands in terms of traditional sizing.

The bike felt balanced and I had noises with flex -either too much or too little.

Clean welds, good paint and high level of finishing all round

The geometry is mountain bike influenced with a more add day ride comfort than in the drops speed. The head angle issn't especially steep, and brings a confident feel to off-road riding.

It felt efficient and both climbing or descending felt like little effort was wasted. The only penalty may be the weight, but it wasn't't or didn't feel obvious.

The handling was confident, no surprises and remained so at varying speeds and terrain. It felt balanced at high speeds and nimble at lower.

The warlock was good fun, and opened up varied off road trails and tracks.

Not applicable as it's a frameset and the buyer would select their own.

The Warlock is a perfect choice if you want an off road bike for trails, tracks and bridleways - surfaces when it's fast, and not in the realm of a suspension mountain bike, whilst the Warlock can handle some rougher, more demanding trails, it's focus is on tracks, trails and smoother, more long distance riding like gravel riding or long distance trails with some off road in them. It's very good value, and feels more like a boutique type frame. For it's intended use, it's very good and capable.
Bikes