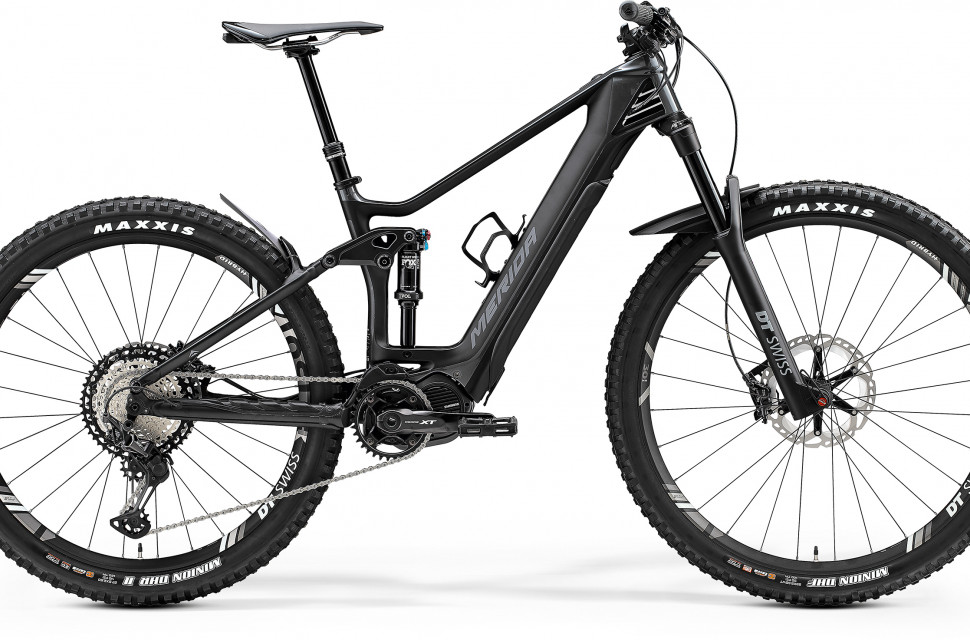 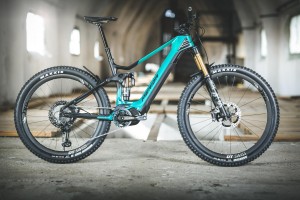 Get 20% off tickets for the London E-Bike Festival with our exclusive code!
Discounted tickets for show on 2-3rd May

With the success of their enduro orientated eOne-Sixty, Merida has added the new eOne-Forty to their line of e-bikes. Featuring a carbon front triangle and integrated battery design built around a Shimano motor this bike is aimed at trail riders and those who are looking to cover miles in comfort. 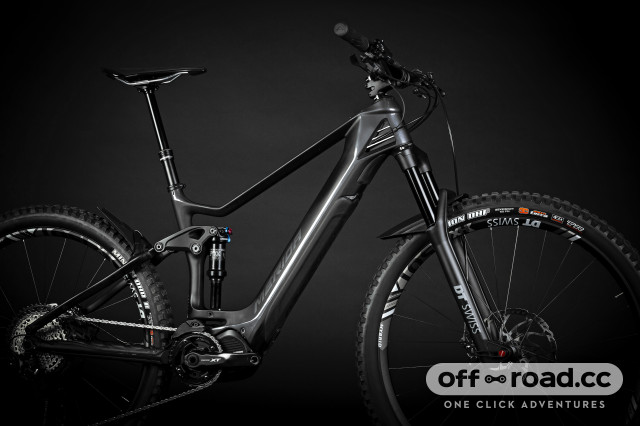 Important to the brand is the battery integration in order to achieve a minimal weight and stiffness penalty. To aid in the brands' quest for stiffness the bike is designed with a straight downtube which is houses the battery. 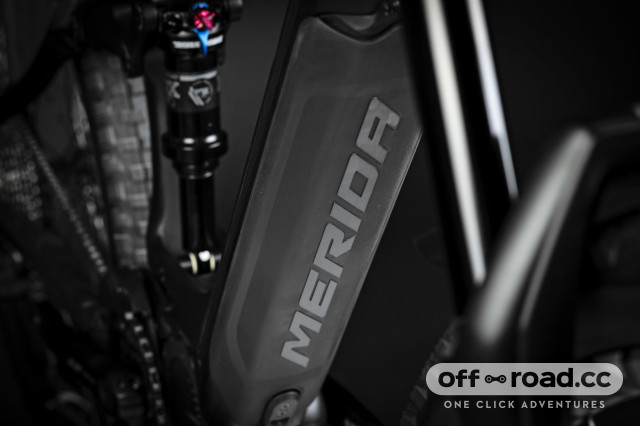 As well as weight and stiffness, Merida has focused their attention on making the eOne-Forty as quiet as possible. To do this they’ve created a clever noise dampening cover for their in-frame battery. It’s made using a multi component construction, with the outer layer being made of a softer rubber which dulls down any noise and a harder inner layer give the cover it’s shape. It’s mounted on rubber o-rings, which can be replaced with bigger rings to absorb any rattle from the battery. Each battery connection has a layer of rubber between them. Each component of this battery cover can be replaced should they wear.

The brand has also focussed some effort one the chainstay protector, which almost encases the portion in order to negate any audible chain slap. 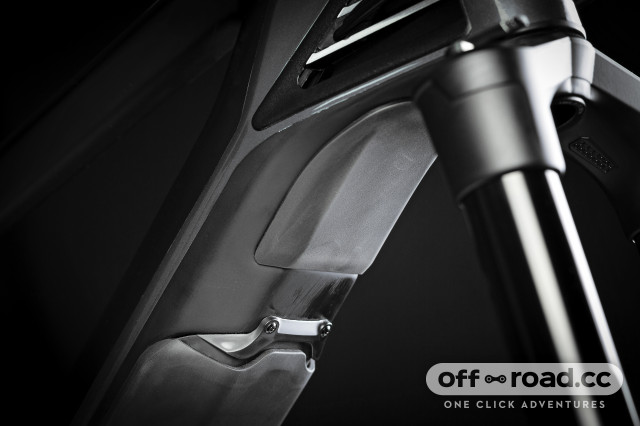 To stop the fork crown from colliding with the downtube in a crash Merida has brought back the Internal Block, first found on their Ninty-Six back in 2015. Different from other brand's solutions, the eOne-Forty uses a clamp that’s installed on the fork steerer inside of the headtube with a couple of rubber blocks that stop any over-rotation. 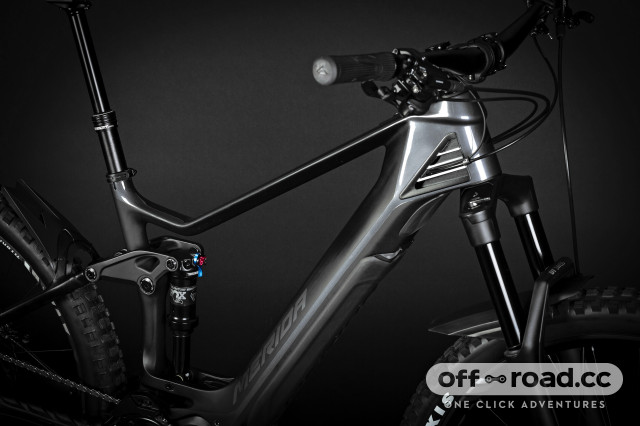 Carbon fibre isn't great at getting rid of the heat that the battery and motor generate and has fitted the bike with a chimney-like cooling system that the brand calls Thermo Gate. The Thermo Gate comes in the form of two vents near the headtube which cools the battery enough to work at its optimum temperature. 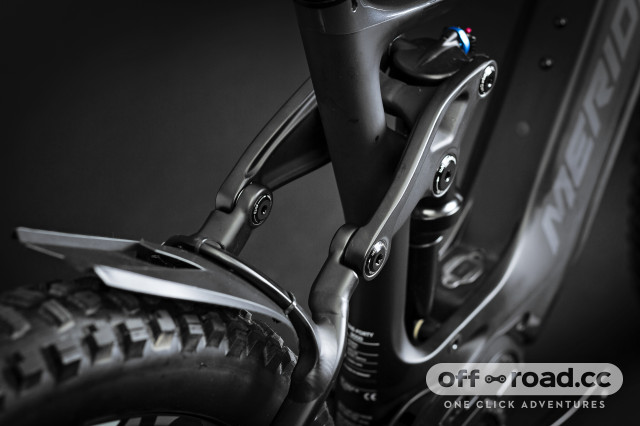 As its name suggests, the eOne-Forty has 140mm of travel front and rear. Merida has gone full mullet with the bike which rolls on a 29er front wheel and a 650b rear, with a 2.6" tyre for the enhanced rollover and a playful back end. The headtube sits at 66.4 degrees paired with a 75.8 degree seat tube angle (on a large).  The reach is a fairly short 449.5mm, on a large. 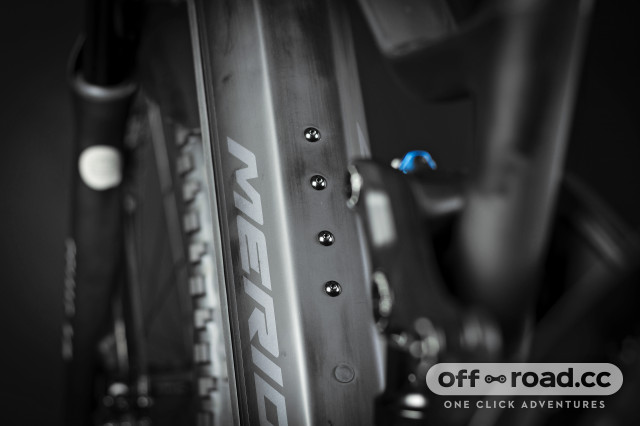 The Merida eOne-Forty comes in five sizes, S to XL and all can fit a 0.75l bottle. Additionally, the specced dropper post can be fully inserted into the seat tube for even better fit.

Prices for the eOne-Forty start at £4,350 for the Suntour equipped model. £4,825 will get you the Marzocchi model. £5,850 will get you RockShox suspension and £7,000 will get you the top of the range, DT Swiss equipped build. Each build uses the Shimano steps motor in either high-end E8000 or more affordable E7000 flavour.