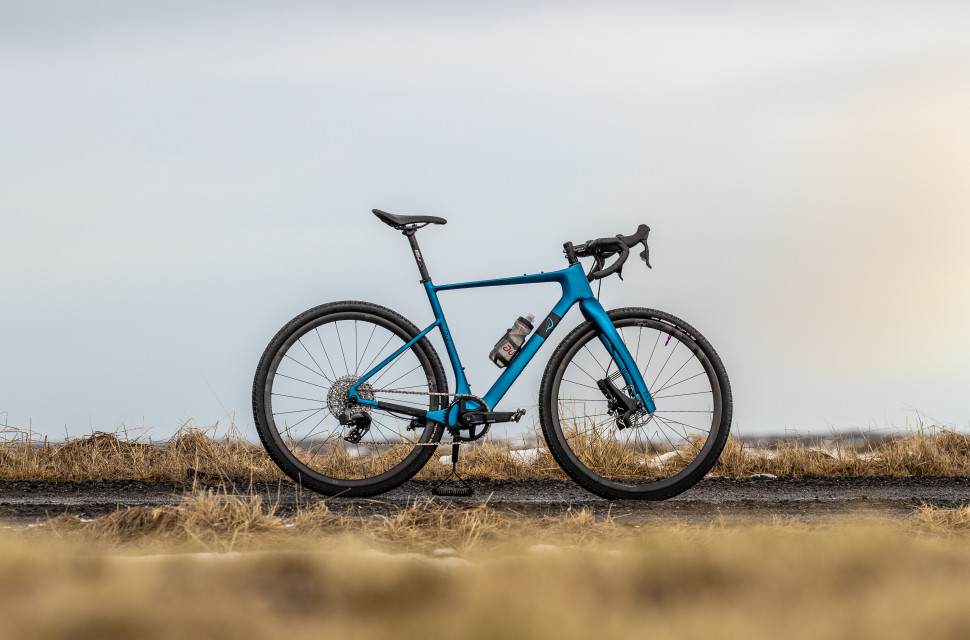 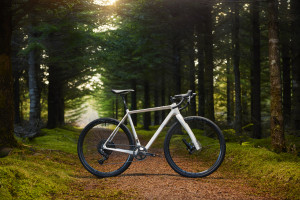 We managed to bag ourselves a ride over in Lauf’s home country of Iceland on their new carbon gravel bike – the Seigla. The frame retains the race orientated geometry of the True Grit but now has additional rear compliance and room to fit up to 57mm/ 2.25” tyres making it even more capable off-road.

The Seigla (Pronounced “Say-Gla”) is Icelandic for True Grit which was the name of Lauf’s first frame released back in 2017. We found that to be a fast machine with excellent handling so it should come as little surprise to find that the new steed keeps almost identical geometry. The new frame has the same racing focus, forgoing fork and mudguard mounts and features some impressively short chainstays; this is no mean feat considering that between them is space for some pretty hefty rubber, with clearance to fit 57mm on full size 700c wheels or 2.25” tyres 29ers in mountain bike talk.

To achieve this, Lauf has taken some innovative approaches, for example, the drive side chainstay looks astonishingly thin, just 6mm thick in fact, where a solid carbon plate has been used in place of conventional hollow tubing, this is the first time we’ve seen this being done but given the valuable few millimetres of clearance it gains the Seigla we highly doubt it will be the last. Further clearance has been found by switching to a BSA73 bottom bracket, that’s standard for mountain bikes but wider than commonly found on the road which many gravel bikes have adopted. Ditching the front mech compatibility has also allowed the chainstays to be widened, Lauf was confident that nearly all of the bikes they’d previously sold were being used 1x and the space reserved for an inner chaining could be put to better use.

The trend of gravel bikes gaining suspension shows no sign of slowing down and the Seigla comes with the option of Lauf’s 3rd generation Grit fork or a rigid fork if you’d prefer. The rather unique looking leaf spring offers just under 30mm of undamped travel with its stiffness being tuned to suit the size of the frame. The glass composite springs are stiffer than you might first imagine which means that a lot of the time you actually forget they’re even there. Unlike a telescopic fork they’re not designed to soak up the big hits but instead deal with the high frequency vibrations often found in gravel riding, this third generation of the fork manages to gain clearance, add lateral stiffness and it still requires no maintenance whilst being lighter than the already quite light previous iterations. 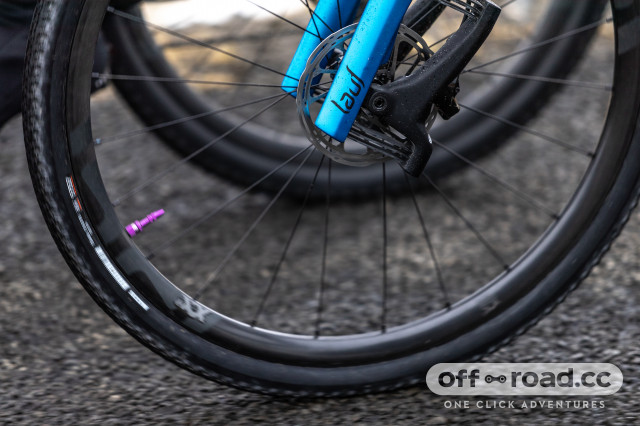 One common criticism of the True Grit was that with the suspension up front the rear was noticeably harsh, with the Seigla, Lauf have dropped the seatstays to try and overcome this. I was also surprised to see the use of a standard saddle clamp rather than an integrated one like we’ve seen on most recent gravel bike releases. Lauf says that keeping the seat tube as long as possible and avoiding adding extra material to where this meets the top tube increases the rear compliance.

The vertically slim seat stays are designed to flex the long seat tube creating vertical compliance at the saddle without the need for a pivot. Lauf says that the result is three times the saddle-towards rear axle when compared to the True Grit and they were then happy to show us some of the tests they’ve done to prove it. By achieving this without adding complexity through pivots frame weight has been kept at roughly 1.1kg which is competitive In this sector. In the size medium that I tested the frame itself weighs 1030g before paint and then 1163g after paint, the seat clamp, bottle cage screws and the thick rubber chainstay protector have been added. 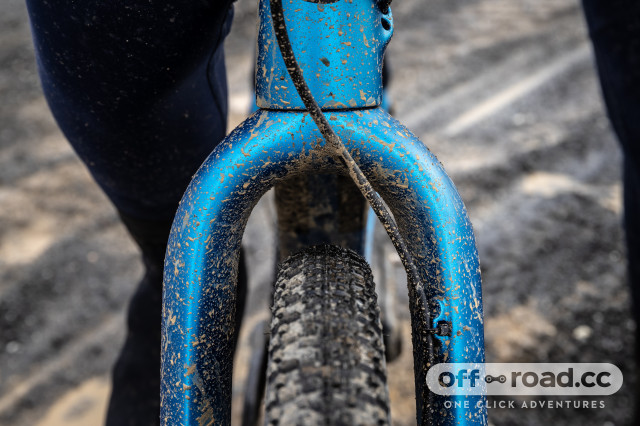 Unlike some gravel bikes this one doesn’t feel overly fragile and is more than capable of taking some abuse. It has in fact met the ISO standards for a mountain bike frame and has forgone high modulus carbon fibre which could have created a lighter frame with compliance and durability being priorities here. 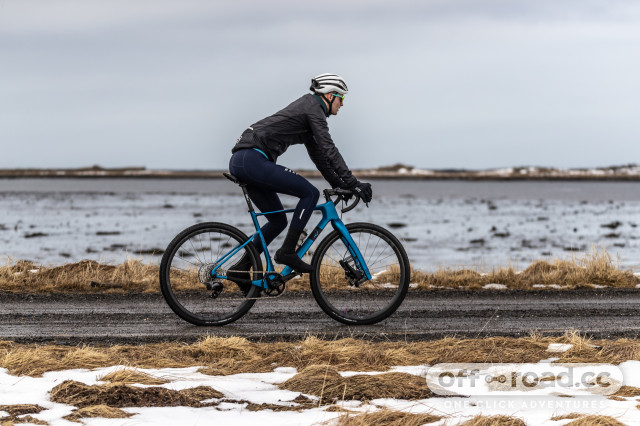 Geometry-wise, the Seigla has a headtube angle of 70.5 degrees, so it's slacker than the 72.25 or 72.5 that you’d find on a Canyon Grizl or Grail respectively. This makes it very stable at high speeds and then a long top tube means that a relatively short stem can be used to sharpen the bike up in the twisty stuff. In use, I was impressed with the Seigla’s stability on high speed gravel tracks but will have to hit the local singletrack now we’ve got a test bike in for full review to fully test the bikes agility.

A seat tube angle of 72.5 degrees on my size medium test bike is decently steep, helping the frame feel comfortable without being lazy, the handling sporty without being overly twitchy or swinging the other way into unresponsiveness and those short chainstays felt excellent for power transfer on short kickers.

I went for a set of Maxxis Rambler 45mm tyres so as to not give the Seigla a comfort advantage by using wider rubber than most gravel bikes can take. Overall the comfort was very impressive, the combination of the Grit fork and Smoothie handlebar, which also makes use of Lauf’s glass fibre knowledge, results in a ride that’s noticeably easier on the wrists than many other gravel bikes. Just under 30mm of travel may not sound like much but it’s very welcome when hitting small rocks and barrelling down some of the less well-kept fire tracks, you still notice the imperfections but it’s a less jarring experience. Before heading out to Iceland my gravel rides were being completed on a Specialized Diverge which makes use of a 350g FutureShock system in the headset to give a similar 20mm of travel, the  Grit 3rd Gen fork adds 415g over its rigid counter piece so not a whole heap more. In nearly all situations I thought the Grit fork outperformed the Futureshock and doesn’t require any maintenance or servicing so if you don’t mind the divisive looks then it’s a bit of a no brainer.

All of the build options come with a 10-44t cassette paired with either a 40 or 42t chainring, I found that the Sram 12-speed groupset offered a great range with the less than 1:1 ratio making for relatively easy climbing on steep terrain and the 10t gear at the back making it hard to spin out even on the tarmac.

As with many brands, the width of the bars that ship with the bike is dependent on frame size and my medium had a set of 42cm’s. That’s the measurement at the hoods as 16 degrees of flair makes them significantly wider in the drops, I found this a good balance between control on the rough stuff whilst retaining some aero performance on the road sections,  the three degrees of back sweep felt very natural and comfortable from the get go, and the tight corner between the main horizontal portion of the bar and hoods creates lots of real estate for hand positions, bar bags and lights. 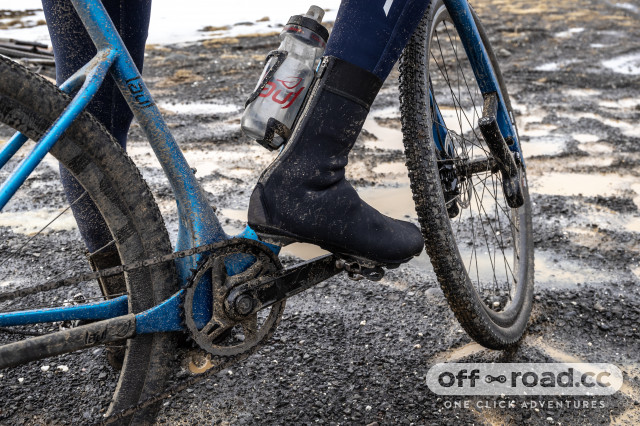 Personally, I’m more interested in racing than bike packing so the 3 bottle cage mounts and bento box top tube mount are more than enough for me, however, riders looking for more of an adventure bike might be disappointed to find a lack of rack or fender mounts or fork luggage mounts. 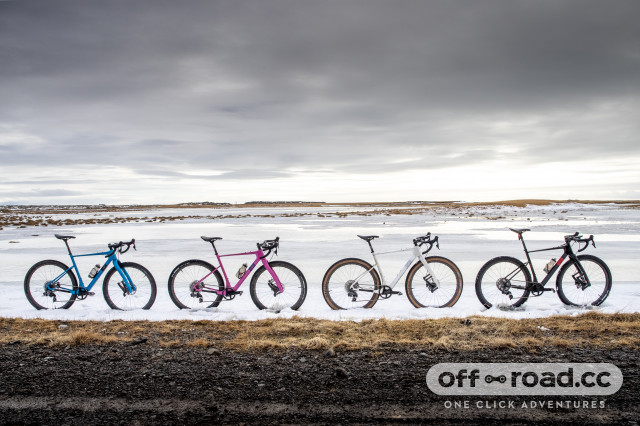 The frame will be available in XS, S, M, L and XL in four colourways: Obsidian Black, Glacial White, Moss Campion (pink) and Silfra Blue with the latter three colours costing a premium and the last two only available on the suspension version and produced in a lower quantity.

A further spec level of “Weekend Warrior Wireless” will be added shortly after to satisfy a lower price point and will feature a Sram Rival AXS XPLR groupset and alloy e*thirteen wheelset.