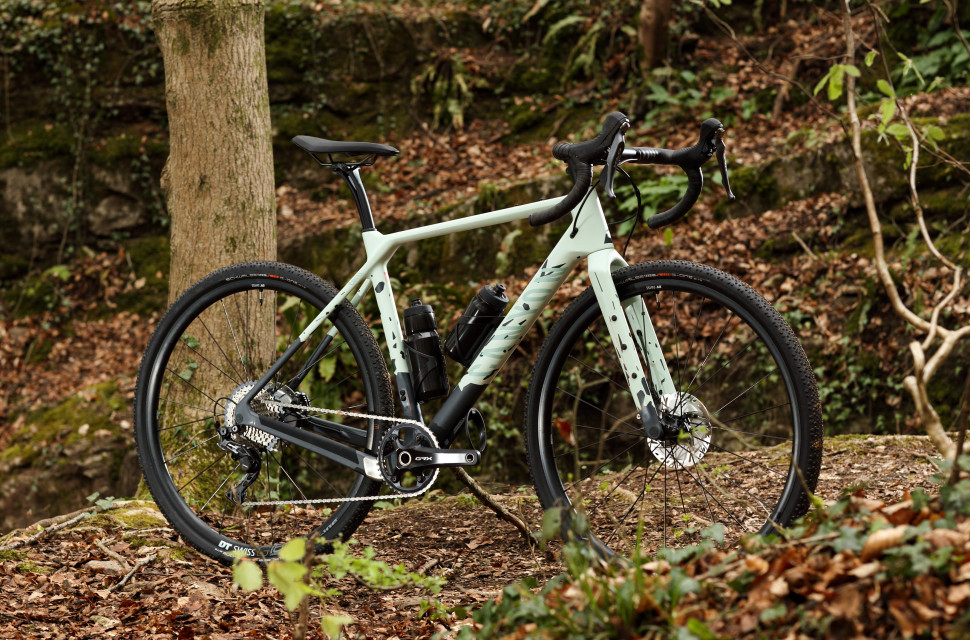 Matthew Page
|
May 11 2021
|
Overall
Quality
Performance
Value
What's good?
What's not?
Buy if...
You want a Canyon Grail with a normal handlebar

The new Canyon Grizl is designed to take on whatever you fancy – it's a versatile and comfortable ride that can suit various styles of riding. Big tyres and clearances make it comfortable yet still capable of going fast, but while it has all the mounts, it doesn't feel like a true adventure bike.

The Canyon Grizl is designed to sit alongside the Grail, rather than being its replacement. The Grail will continue as a more race/speed focused bike, complete with its divisive hover bar – something the Grizl does not feature. 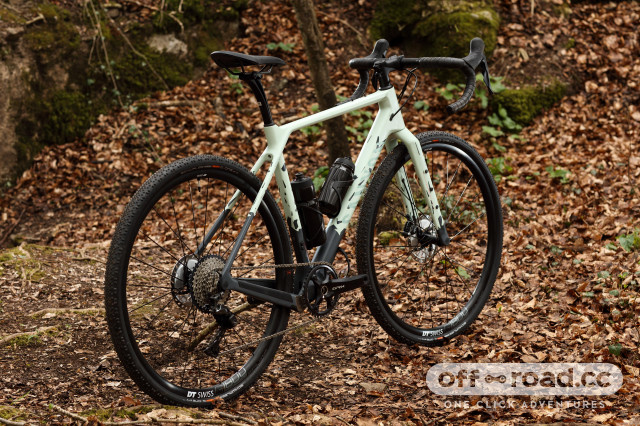 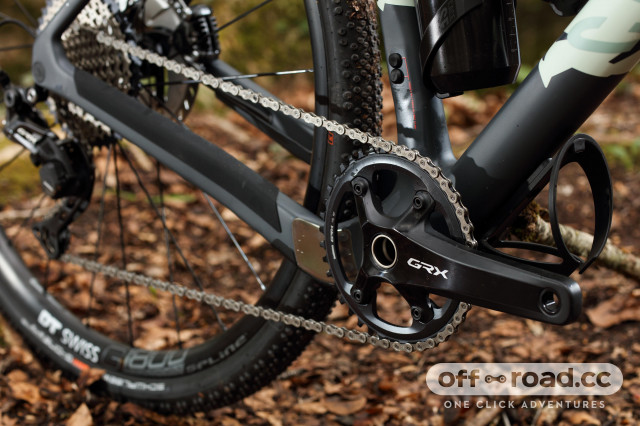 Without pedals our medium-framed bike weighs in at 8.975kg, which is less than the claimed 9.1kg. The 2021 Grail CF SL 8 (£3,149) meanwhile has a claimed weight of 8.91kg, making for very little difference between the old and new models.

Canyon says the Grizl is a “Do anything, go anywhere” bike, and it certainly has the mounts for adventurous riding.

As well as the usual bottle cage mounts, there are three-bolt 'anything' cage mounts on both fork legs (3kg max load each), mounts under the down tube for an extra bottle cage, and bag mounts on the top tube. You can also fit mudguards, although only Canyon's ones rather than standard aftermarket types. 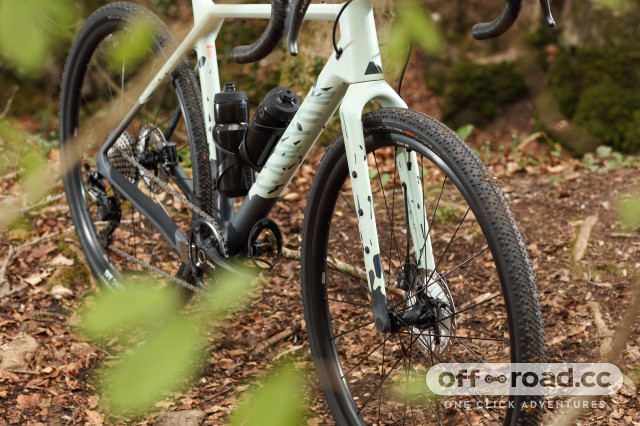 Tyre clearance is generous. Canyon claims 50mm tyres still leave 6mm of clearance on each side, though the stock ones are 45mm. That clearance at the rear comes courtesy of one of the most minimalist dropped chainstays I've yet seen.

A large metal plate protects against damage in the event of a dropped chain, and it feels solid and meaningful – it's not simply a stuck-on extra.

The bottom bracket shell is press-fit BB86 and, while some would prefer a thread-in type, I suspect the extra stiffness it creates is at least part of what's allowed such a narrow dropped chainstay.

Canyon has taken the sensible step of filling that shell with a threaded Token Ninja bottom bracket, which spins incredibly smoothly with no creaks or noises.

The frame has the same integrated seatpost clamp as the Grail, with an exposed hex bolt on the rear of the seat tube. While the design holds the post firmly and is protected with a rubber bung, I am not sure how well this will stay in place longterm. It would be best to keep an eye on it, as without the bung the metal bolt will be exposed to the elements and clog quickly. 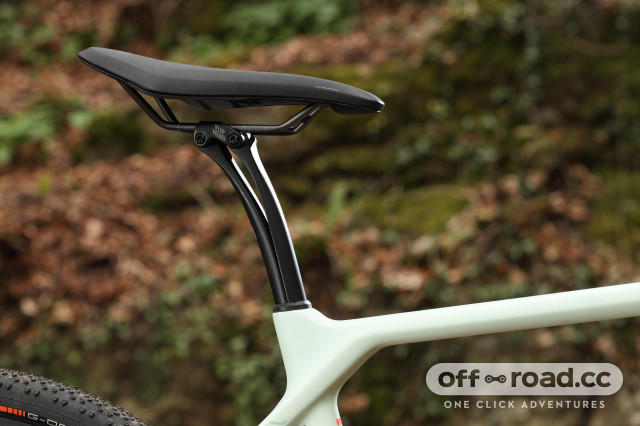 Another feature that could be improved are the cable ports. The rubber bung on one side in particular had a habit of coming out, which then resulted in cables rattling inside the frame. 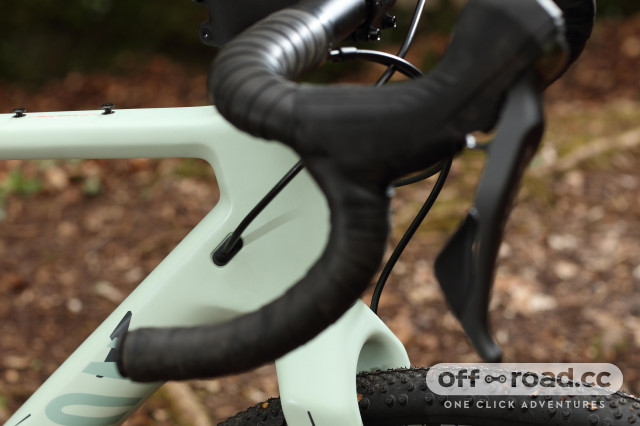 All frames, regardless of the model or spec are compatible with both single and double chainsets with a direct mount front mech attachment. There's also routing for a dropper post, although no models come with one as standard.

Geometry on the Grizl is not very radical – despite being designed for more adventurous riding, the head tube angle (on this medium) is 72.25 degrees, just 0.25 degrees slacker than the Grail. That's pretty steep for a gravel bike.

The Grizl's shorter reach and lower stack mean it feels more upright and relaxed than the Grail, but it's still not at home on steeper and more technical downhills. On the road it's a tall position that is comfortable if not that fast. 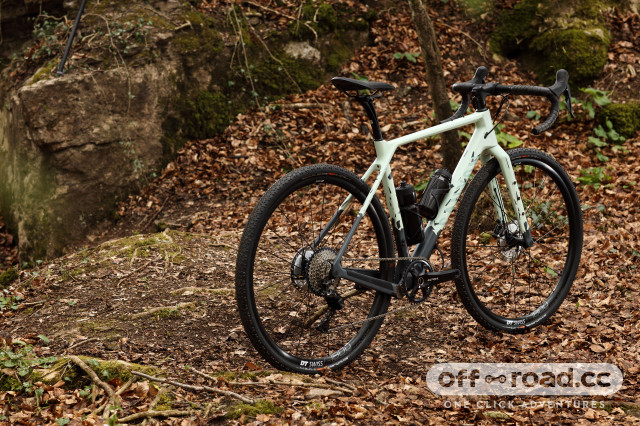 It feels best on a mix of road and unsurfaced tracks, especially where the tracks are not too technical or steep. Handling is fast and agile with quick direction changes, while the steep 73.5 seat angle puts you forward for efficient pedalling.

The CF SL 8 gets a full GRX 800 groupset –no substitutions. Fitted with a 40t chainring and an 11-42t cassette it gives a lowest gear that's below 1:1 ratio, for reasonably easy climbing on steep terrain or when bikepacking with a load.

On roads or fast tracks it does mean spinning out at a fairly low speed, but if that's an issue there's always the twin-ring chainset version instead. 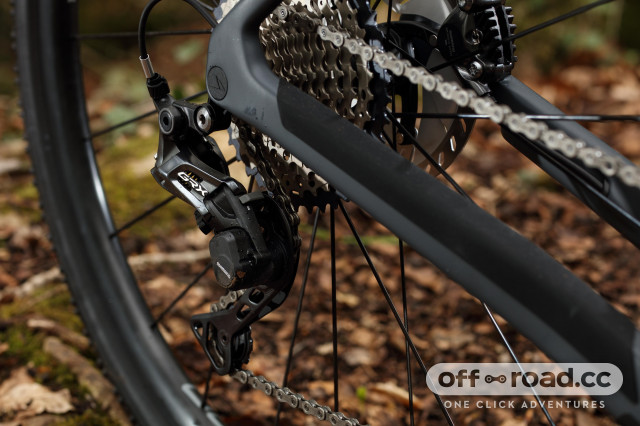 At 1,900g (claimed) the DT Swiss G1800 Spline wheels are not the lightest, but they feel great and give very little flex, even when sprinting or cornering hard. The 24mm internal rim width is reasonable too, giving good support for the Schwalbe G-One Bite tyres.

The Schwalbes perform well in most conditions, though struggle a little with cornering and traction on very fine loose surfaces. In general though, they suit the style of the bike and intended use well.

At low pressures, comfort is quite good and on general forest roads and smoother byways they help the bike float over the surface. 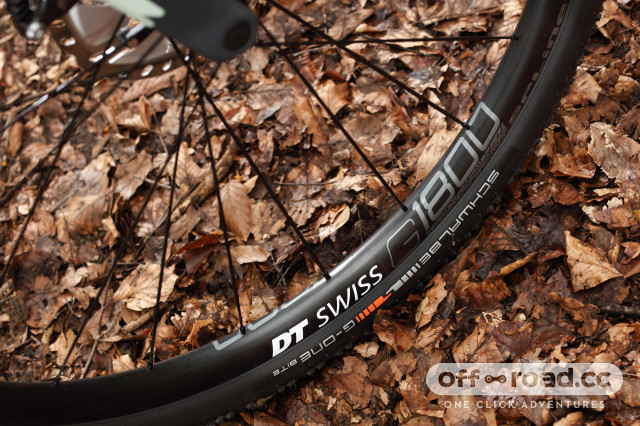 Perhaps the biggest difference between the Grizl and the older Grail is the cockpit. While the hover bar on the Grail has its fans, I am not among them – I find comfort poor, and it can interfere with my thumb positioning and affect control.

On this Medium Grizl the bars are 440mm wide with a 130mm drop, a 70mm reach and no flare. The shape feels biased towards road riding – a set with some flare and a shallower drop would much better suit the bikepacking intent.

Still, the Grizl's standard cockpit is at least far easier, quicker and cheaper to change should you want to adjust anything. 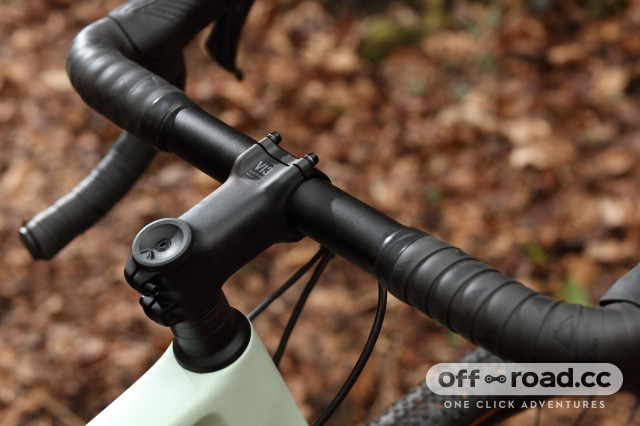 The VCLS seatpost is another big plus for comfort. This two-piece carbon post allows considerable flex and, while setup is a little more involved than with a standard post, it's unlikely to be something you do often.

Against Canyon's existing Grail, the increased tyre clearance is a big positive for grip, control, comfort and speed. The difference between 40mm and 45mm tyres is surprisingly large, and the option to go wider still is welcome – especially in the UK.

While the bars are arguably ill-shaped for much of the Grizl's intended use, they're a lot cheaper and easier to change than the unique design found on the Grail. 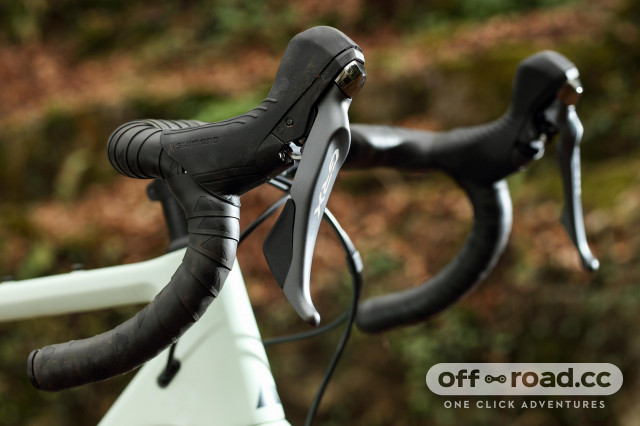 Against the wider market, though, the Grizl has features that seem at odds with its own design. The tyre clearance is greater than the vast majority of other bikes, yet the geometry is more road-focused – even against other all-rounders.

Despite the prices of Canyon bikes increasing over the past 12 months (the 2020 Grail CF SL has gone up £550), the Grizl still offers good value for money. The full Shimano GRX 800 groupset and DT Swiss G1800 Spline wheels offer a great base.

Spend £3,000 on a gravel bike from major brands such as Specialized, Cannondale, Trek or Scott and you won't get the same level of componentry.

The Grizl is by no means a bad bike and for general riding, it will suit plenty of riders. The increased tyre clearance is the biggest plus, especially for British riding.

But it does feel a little undercooked, like Canyon took the Grail, added a few mounts and a standard handlebar, and pronounced it perfect for bikepacking. While it's capable, nicely made and impressively well specced, the geometry and cockpit can't quite deliver on the promise shown elsewhere.

Gristle is the chewy, inedible part of a steak. Is this bike supposed to tackle the unwanted bits of unridable track that no other road bike would want?