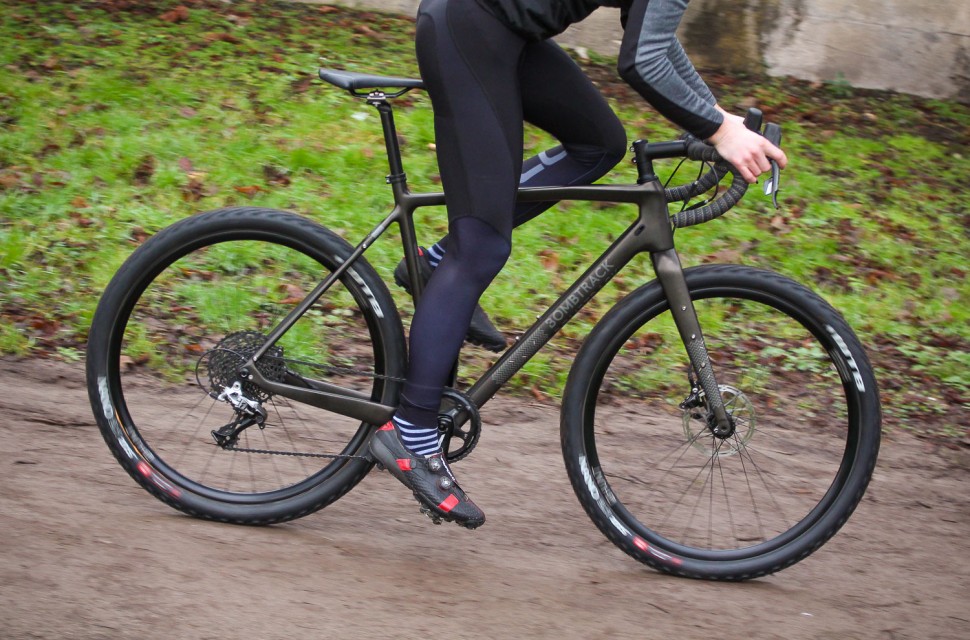 Dave Arthur
|
Jun 1 2018
|
Overall
Quality
Performance
Value
What's good?
What's not?
Buy if...
You want something that puts the fun and capable into adventure riding

​Bombtrack is a young brand that has quietly been making waves recently with really interesting looking road and adventure bikes, and this all-new carbon fibre 650b Hook EXT-C is a highly capable, comfortable and great handling adventure bike if you really want to delve deep into the woods and escape the congested roads and plan an ambitious adventure into the unknown wilderness.

Thankfully the ride is more exciting than the looks. There’s an exciting buzz surrounding the emergence of adventure bikes at the moment but that’s not matched by the rather conservative and understated looks of the Bombtrack.  I’m sorry, it’s just not for me. You might feel differently though.

But when your focus shifts from the paint job to the view from the saddle, the Hook EXT-C displays a really fine handling balance and an exciting ride that more than makes up for its lacklustre appearance. It’s a huge bundle of fun and just encourages you to explore and get away from it all. 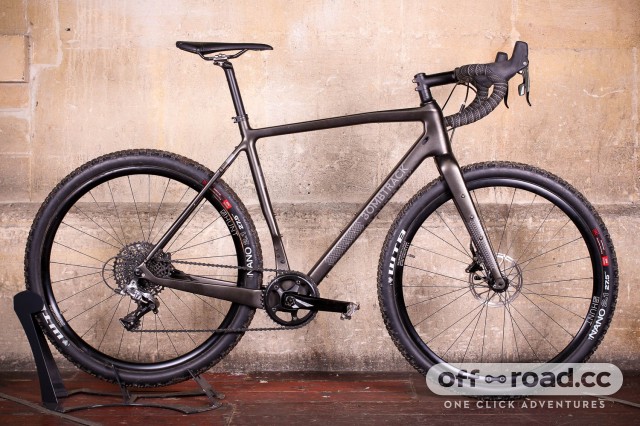 Rolling on 2.1in wide 650b WTB Nano tyres, provided you make with a digital pressure gauge and run the tyres low, let you ride anywhere with more capability than most circa 40mm tyres I’ve ridden on many other adventure bikes.  You really can go anywhere, over any trail, terrain or obstacle with the extra volume providing more vibration absorbing cushioning when the going gets really rough and tough. 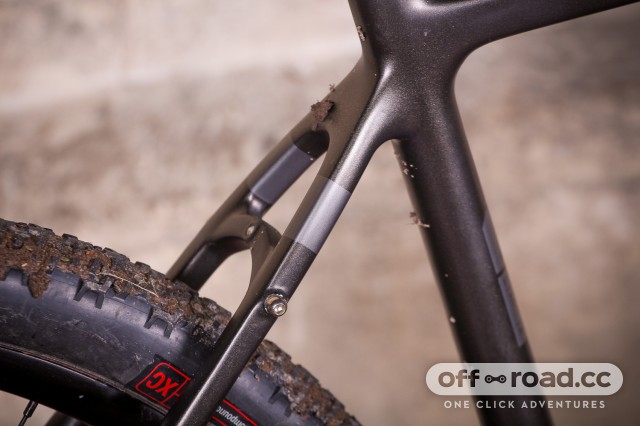 It’s hugely entertaining taking the Bombtrack along trails I’d normally reserve for a mountain bike, and while it’s in no way as capable as a decent full-susser with wider handlebars and a dropper post, I was consistently impressed with just how much I could get away with. 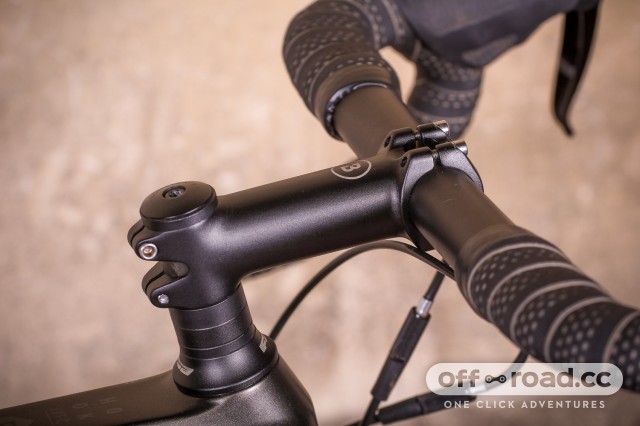 Much of that is down to the big tyres of course. There’s an interesting debate about the best tyres for gravel and adventure riding going on at the moment, and in reality, there is no such thing. It all depends on the terrain and trails you’re riding, the sort of riding you’re doing and what you want from your bike.

I’m minded to say that for greater off-road ability with maximum comfort, it’s hard to beat the 650b Nano 2.1in tyres on this bike. They don’t feel as fast as a 700x40mm on flat out blasting fireroads, but when speed doesn’t matter but traction and comfort does, they are hard to beat. 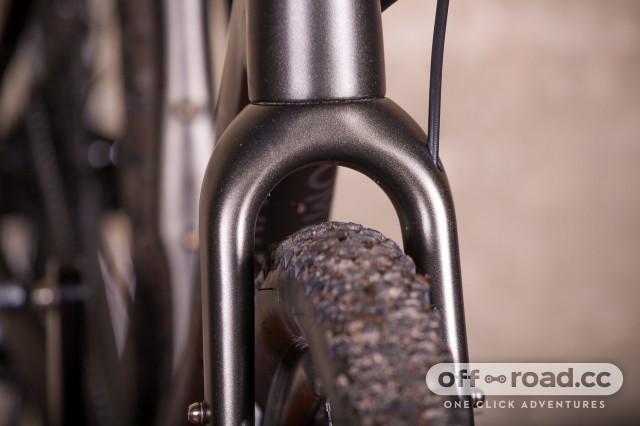 And the great thing about this bike, and many bikes like it, is that you could easily swap in a 700c wheelset and with space for up to 52mm tyres you certainly have loads of options available to you. 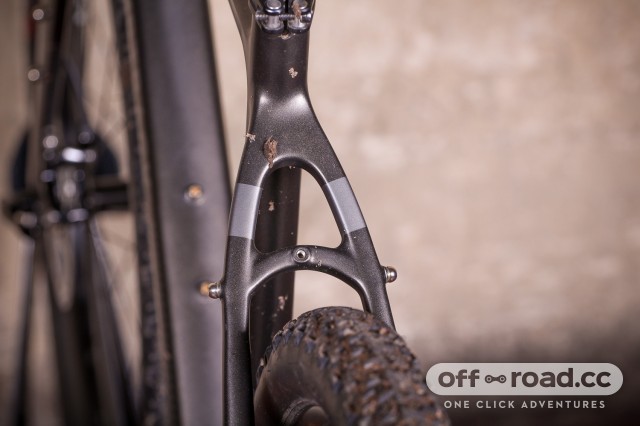 The Hook’s geometry lets you make the most of the bigger tyres. The relaxed head angle and long wheelbase provide good stability in the rough and when you’re hurtling rough bridleways or nipping between the trees in the woods on a thin ribbon on singletrack, though I found things all the better for swapping in a shorter stem.

On the road, the Bombtrack is no slouch, though it’s obviously not going to keep up with friends on road bikes. Add a bit of air to the tyres though and it rolls along the hard stuff without any huge increase in effort, provided you keep the speeds this side of 20mph. 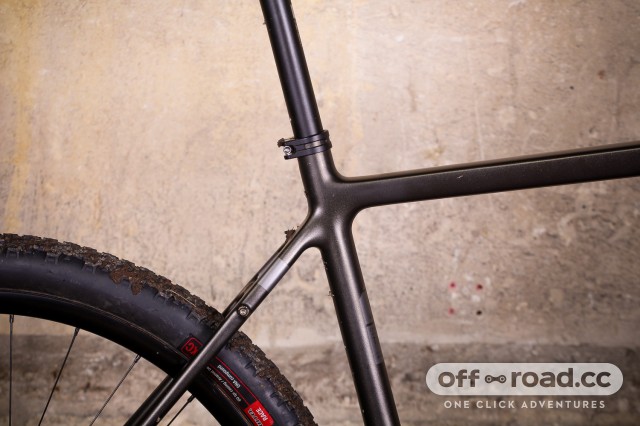 road.cc was impressed with the original Hook EXT in its steel guise, but there’s no getting around the high weight of a steel frame. It’s not necessarily a bad thing, but if you want to do any racing or bikepacking, a light bike is a good place to start, and carbon is the best route to a lightweight bike.

Bombtrack has specced Toray T600 and T800 high modulus carbon fibre in the new frame, and it says it has optimised the weight and strength in critical areas. Going to carbon fibre for the frame and fork has not only allowed Bombtrack to shed considerable weight, it also has taken the opportunity to shape the chainstays and seat tube to maximise the tyre clearance  - it’ll take up to 27.5 x 2.2" / 700 x 52c.

It has also added a bunch of useful details to ensure maximum versatility. There are three bottle cage mounts on the frame and more on the fork, and there are eyelets for attaching racks and mudguards if bikepacking bags aren’t your cup of tea. This is clearly a bike designed for going the distance. 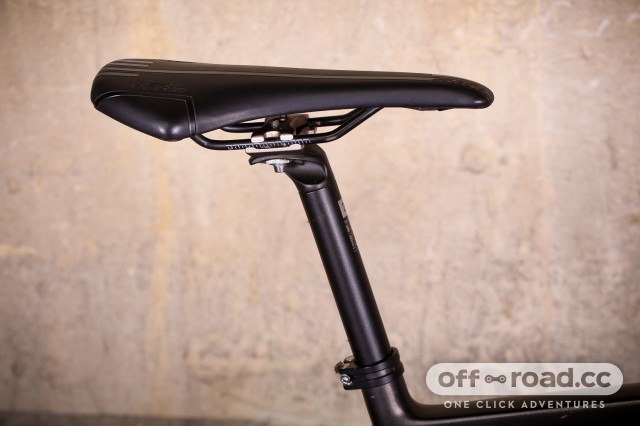 Given the bike is specced with a 1x drivetrain it’s a shame there are the ugly reminders of front mech compatibility. It’s a sign of the company playing safe but while it’s noble offering customers the chance to fit a front mech, given you can’t buy the frame and there’s only one model - with a 1x groupset - it seems a missed opportunity to not clean up the frame in this area.

Another interesting decision is the one to swap from the external bottom bracket of the steel version of this bike to a BB30 on this carbon bike. Carbon and large diameter press-fit bottom brackets have traditionally gone hand in hand for extra stiffness and reduced weight, but on this sort of bike, I’m not sure it was the right decision. 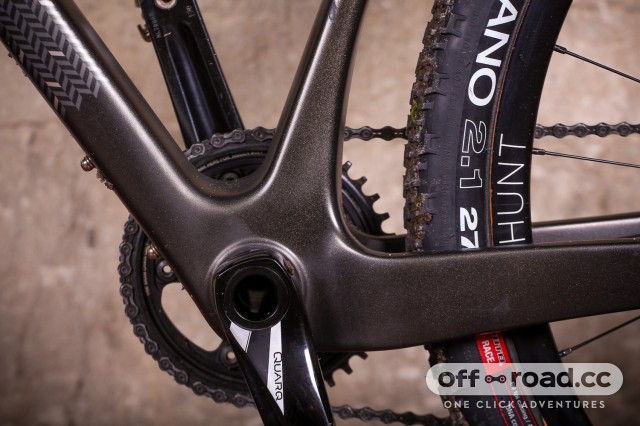 There’s a growing movement back to external threaded bottom brackets and Bombtrack missed an opportunity here. Suffice to say, I had no issues with the bottom bracket during testing. 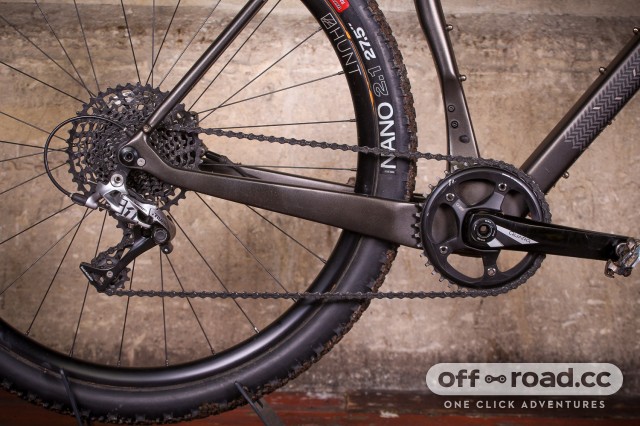 Single ring drivetrains make good sense on adventure bikes, and there SRAM Rival 1 fitted to the Bombtrack is a really popular choice, it’s a groupset I’ve spent a lot of time on. There are no complaints: the brakes are solid and dependable, the 40t chainring combines with the 11-42t cassette to provide a useable spread of gears for most road and off-road encounters.

British brand Hunt is enjoying a lot of success at the moment with well-priced wheels, and its Adventure Sport wheels continue this trend. They are strong and solid wheels, they shouldn’t let you down in the back of beyond, and the claimed 1,549g is a competitive weight that helps to offset the highish weight of the WTB tyres.

They’re a tubeless-ready wheelset with a 20mm internal and 25mm external width that works well with wide tyres and while I had no issues, a slightly wider rim but be beneficial with these very wide mountain bike tyres. That aside, they worked well, the hubs span smoothly during my time with the bike.

The wheels and tyres came installed with tubeless valves and sealant and held up just fine through my time with the bike, I’d definitely recommend going tubeless for the sort of riding this bike is designed for.

I’m not a massive fan of wildly flared drop handlebars, so the mild flare shape of Bombtrack’s own handlebars suited me well, with a short reach to the SRAM hoods working well in the rough. As I mentioned I swapped the stem, but I found the saddle a good fit and the aluminium seatpost is easy to adjust and didn’t slip once. 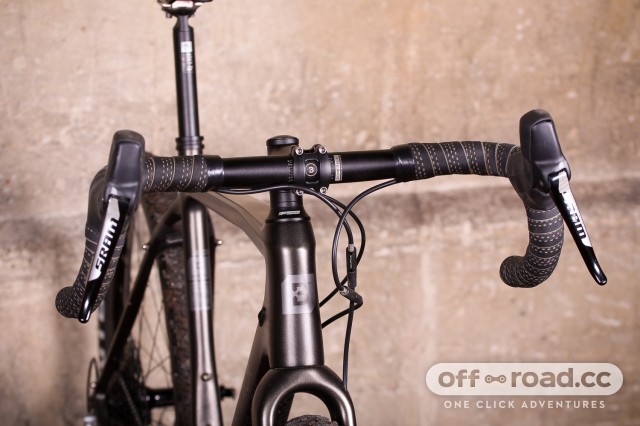 Rather smartly Bombtrack takes a size-specific approach to the components fitted to each of the seven sizes. As an example, the size medium test bike came with a 110mm stem, 170mm crank arms and a 42cm wide handlebar.

With its chunky 650b tyres and light and stiff carbon frame, the Bombtrack is straying perilously close to a hardtail mountain bike, but there’s enough to distance it. It’s smooth and swift on the road, and insanely good fun off the road in the trails and woods, with bags of enthusiasm and planted handling that will have you grinning from ear to ear.

£3,000 is a lot of money, but we had a look around and couldn’t find any direct rivals to the Bombtrack. It does appear to occupy an area in the market vacant of similarly specced rivals which make the Hook one of the few options with a carbon frameset and SRAM Rival 1. The options are even fewer when you add in the 650b element

If you really want a carbon frame with a 1x drivetrain, the best options we could find was an Orbea Terra with Rival at £2,400, which is based on 700c wheels, or swapping carbon for aluminium is the Mason Bokeh Rival at £2,795 which can be specced with 650b. If you’re not fussed about 1x there are more options from the likes of Trek and Specialized with Shimano 105 double chainsets with carbon frames for about £2,600.

There’s a lot to like about the Bombtrack. I’d prefer a bolder aesthetic but there’s no denying it’s a cracking bike to ride and hugely good fun, and would suit anyone with ambitions from just chasing their tail in the local woods to embarking on a multi-day bikepacking trip.

The frame features an optimised chainstay profile and seat tube scoop, designed to allow for larger tires (27.5 x 2.2" / 700 x 52c) and a shorter rear end for more agile handling. This solid and reliable SRAM Rival-1 drivetrain in combination with the Hunt Adventure wheelset ensure the Hook keeps going when the going gets tough.

As a brand-new model for 2018 the Hook EXT-C builds on the success of the original model but in a full carbon fiber format. As with any Bombtrack the EXT-C is built to be versatile, allowing you the option for sticking on the smooth stuff or heading well off the beaten track. With any new model we are always keen to test each aspect of the bikes design and build to the fullest, in the case of the EXT-C the proving ground was the HT550 in the Scottish Highlands, possibly the toughest terrain a gravel bike is likely to ever encounter.

Very efficient when putting the power down and ploughing through mud