Skip to main content
Log In Register
Tracy Moseley is one the most successful downhill and enduro racers of all time. This is her story. 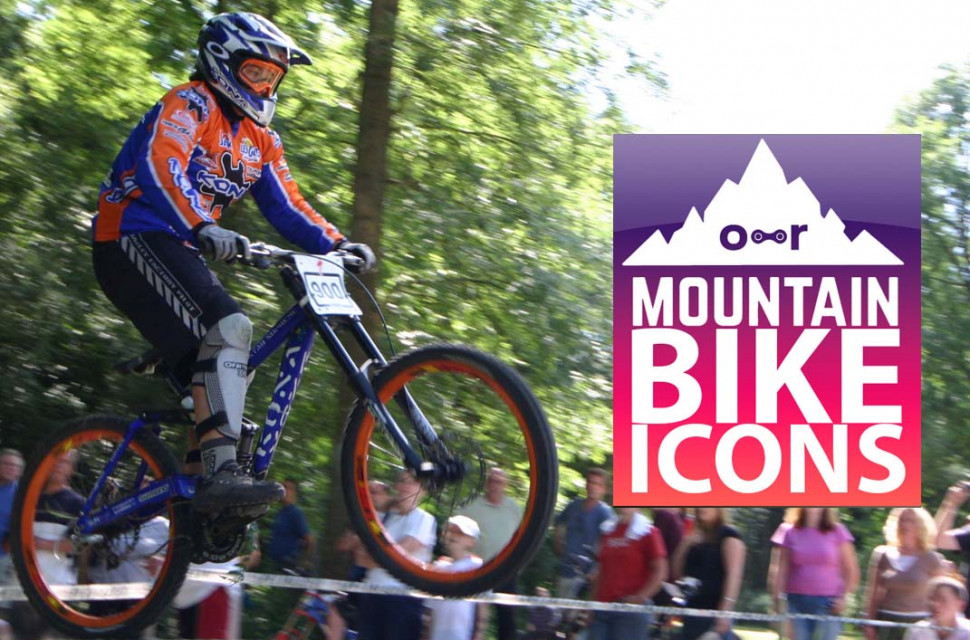 Despite only covering a relatively compact area, the idyllic Malvern Hills are deeply rooted in British mountain biking folklore. Not only is it the ancestorial home to one of the biggest and intermittently longest-standing races, the Malverns Classic, it has also produced some of the nation’s greatest off-road racers; including XC racing aces Liam Killeen and Evie Richards - and, of course, the one and only Tracy Mosely.

Worcester-born Tracy Moseley's career is impressive; she went on to win 23 national downhill titles, 16 World Cup rounds, two overall World Cup titles - being the first ever British woman to do so, the 2010 World Championship and three EWS World Titles – and that’s just scratching the surface of her impressively longstanding and varied trophy cupboard.

Mucking out and mucking in 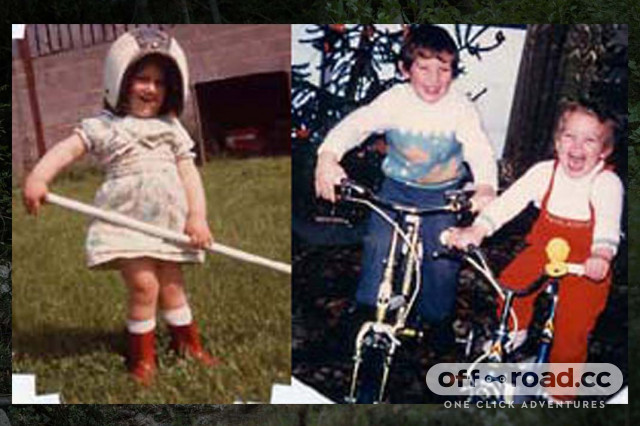 During the early 1990s Tracy’s brother, Ed, started to dabble in the new and evolving dirty side of cycling – mountain biking. This was her introduction to the sport.

“My brother was the reason I started racing a mountain bike. We grew up on a farm and so we always had bikes around to ride and play on, and Ed used to challenge me to ride little “north shore” ramps in the yard.”

As Tracy and Ed’s riding progressed, a new world of opportunity opened up for the siblings.

“He then started biking a bit further afield, on the Malvern Hills with friends. In time we began to do a few local XC races, and Ed always encouraged me to come along and eventually, he persuaded me to have a go at a race.”

Despite being no mean rider himself, Ed was all in for helping his sister from the get-go.

“From then on he always supported and helped do mechanics on my bike, so for those first years he was a huge influence and help.” 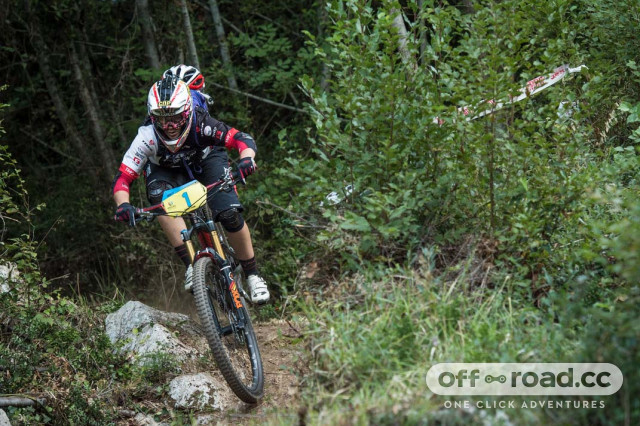 Back then, many riders started with cross-country mountain biking, including Tracy, although she soon found that shredding downhill was more to her taste.

“Ed was racing cross-country, and so those were the races we first went to. But I was a little bit of a lazy teenager and didn’t really enjoy pedalling uphill; all I wanted to do was the fun bit, going downhill.”

Even so, she is certainly no slouch on the cross-country racetrack, or in the winter fields of cyclo-cross racing but downhill made more sense to her.

“It was a pretty easy decision for me to want to race downhill - when the opportunity of downhill races came along. I also did a few dual slalom and dual descenders as they were popular disciplines at the time, and these all suited my skills and strengths.”

In no time, Tracy was winning NPS races and Junior national titles, which caught the attention of a major team, whose roster included some of the best downhill and XC racers of the era. 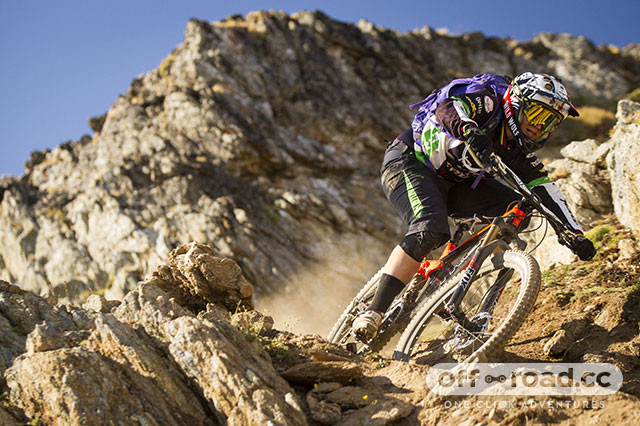 “I think I was so lucky to be approached by Clive Gosling and Cannondale UK - at the time I was 16 years old. They were working with a marketing company called ‘Marketing Activity,’ and the Volvo connection on the World Cup team was also linked with Volvo UK.”
Although Tracy later completed her degree in biological sciences, being signed to one of the biggest teams in the world gave her an education of an invaluable and different kind.

“It was such an amazing professional team to start out my career with, and we also learned a lot about speaking in public and how to think about the media, which I think was amazing to learn and think about at such a young age.”

The 90s may well have been a boom time for mountain biking but it still seemed like a country mile away in terms of it being a legitimate career path for Tracy.

“I definitely had no idea that there was a possible career in this sport when I started, and now nearly 30 years later to still be involved in the industry is just crazy.”

Had Ed not challenged her to ride those backyard planks, things could have turned out very differently.

“I think if I hadn’t got into mountain biking, I may well have ended up taking over the family farm, as I always loved farm life and the animals.”

Luckily, she had the full blessing of her family to follow her passions.

“My parents did not have any sporting past, or indeed any interest or knowledge of mountain biking but they did everything they could to support us and drove us to races all over the UK - and even further afield during those first few years.”

“They loved the fact that we had a passion, an outdoor life - a healthy interest, and that we were making good friends. They never got involved in sponsorship or pretended to coach us or tell us what to do; it was just amazing backstage support and something I am forever grateful for.”

That support resonates with her now more than ever.

“Now with being a parent I can see the attraction of your children finding an outlet to focus on, to be active, to be healthy and outdoors, and surrounded by good people. I hope I will do the same for Toby (her son) in whatever his passion turns out to be. Not being a pushy parent, just a supportive one is the ultimate help a parent can give.”

Throughout her career, Tracy has worked with helping young women (and boys) in the sport - including inspiring a young Evie Richards when starting out. Has she seen improvements in general for female riders in the UK over the years?

“Yeah, I have enjoyed being able to help give opportunities to a bunch of youngsters, and I do really feel that the sport, for these young girls is in a great place. There are definitely more opportunities and big steps towards equal pay and sponsorship now. Although we still have a way to go, I do feel like it’s moving in a good direction and we are seeing such talented and dedicated athletes from the UK, it’s very exciting.” 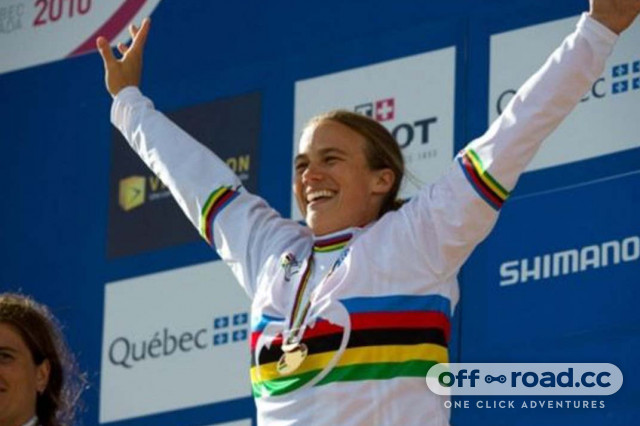 In 2002 Tracy stepped up to the highest rungs on the world stage when she won her first World Cup in Fort William.

“It was incredible and it really put my name on the world stage. It was very unexpected, but the most incredible experience was to make history as the first ever British woman to win a World Cup, and to do it at the first-ever World Cup Downhill race to be held in the UK, that was very cool.”

Needless to say, that was just the start of her love affair with Bill - and it was to be the first of her 16 World Cup wins.

“Fort William is and will be forever a very special place for me. I had so much success at that venue and got to experience the most incredible races with being a home favourite and having thousands of people willing you to win, it was amazing. Thank you to everyone that came and cheered in Fort William all those years ago.”

When Brits first ruled the roost

Since that debutant victory on the hallowed and hollowed-out slopes of Fort Bill, British downhillers have been a major global force - but how and why? 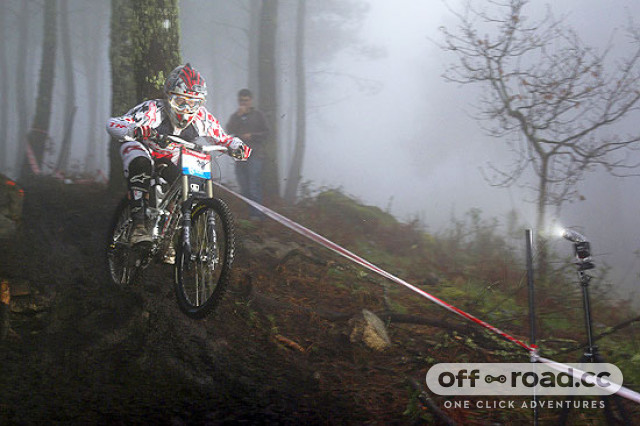 “I think that in the early 2000s we had a good number of riders being successful on the World Cup scene, and so our UK national race scene was thriving. Racing and winning and national race was the best training for World Cups, and so success was breeding success.”

There was, of course, also the fact that we didn’t have uplifts.

“We also have never had the big mountains and chairlifts, and so often the best place to ride and spend time on your DH bike was at a DH race, and so we just got really got at downhill mountain bike racing”

For around 20 years Tracy was at the top of her game, which is a long time in terms of downhill mountain biking. Was there something extra special in the Malvern Water? 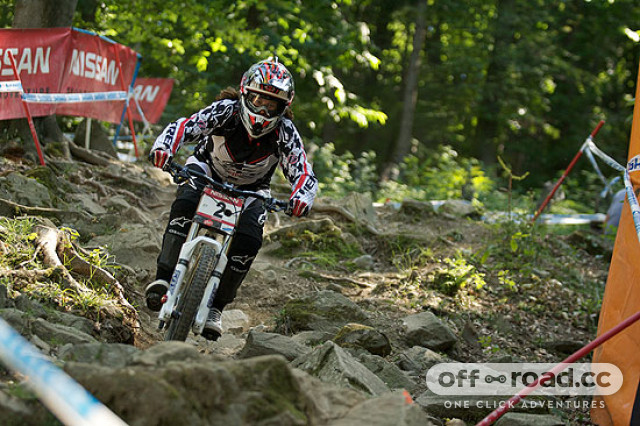 “I was always fairly safe and not too much of a risk-taking rider, and often felt like I hadn’t ridden my best in race runs. I think I rode at 95% often, meaning that I didn’t often make big mistakes, and so that helped me to be consistent in races. I also travelled and raced in lots of different environments and terrain and so I was pretty adaptable to all sorts of courses.”

After finally winning her rainbow bands on the slopes of Mont Sainte-Anne in 2010, Tracy decided to make a sideways career move, or rather add a new dimension to the trail mix.

“I was super lucky in that I was ready to move on from my DH career. In 2011 I was enjoying riding my bike up and downhill, and I was looking for more than just one racetrack at each venue we visited. Those early days of Enduro racing were big days out; the adventure and feel of discovering new places and new trails, and doing some blind racing was just the perfect discipline for me. It was what I wanted from bikes at that time in my life.”

She did pretty well at it, too.

“I never dreamed that I would end up winning the first ever EWS, let alone the first three World titles. I think I found something that I was good at.”

She also won events such as Trans-Provence, Megavalanche, and even finished the Cape Epic over the years.

What were the absolute career highlights?

“I dont really look back and regret much. I feel super lucky to have had the opportunities I have had, and maybe I wish I had been more dedicated to my training when racing DH - as I think I could have been better. But then I wouldn’t have been the athlete I was in enduro if I had, and so I’m happy with how it all worked out. No plans and no regrets, as you learn from all the mistakes and I’m just so grateful for the time I have had riding bikes and meeting amazing people.”

Despite retiring from elite enduro and downhill racing, an electric dream sparked a return to racing a couple of years later. 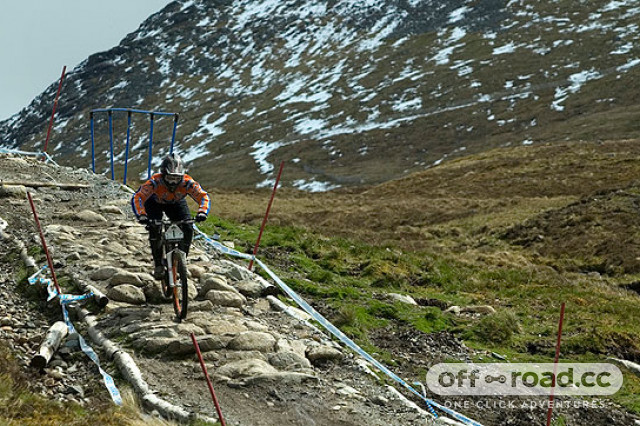 “Yeah, it was – again not really planned. I never stopped riding bikes, and Trek was keen to have someone racing the new e-bike races. I felt like it was something I could do with little training and bike time, and just have fun with it. I also started working with Bosch as a brand ambassador and so quickly had to learn to ride an e-bike.”

The freshness of e-MTB was also hard to resist.

“I seem to have always been around the sport in the infancy of new disciplines; DH back in the 90s, XC eliminator, enduro and now e-bike racing.”

“I enjoy the new challenges, the unknown future and feel like some of my years of experience can be useful in feedback to race organisers and the industry and if it keeps me riding bikes and having fun then I’m all for it.”

Juggling the present and the future

As well as working with athlete management and the Trek Factory Racing World Cup team, not to mention e-bike racing, Tracy now also has a family to manage. Has that changed her outlook towards hurtling downhill at full speed?

“Being a mum is for sure the most challenging stage of life so far. Racing and riding bikes to a high level with all the stresses are simple in comparison, as I was in control of that life. There is no off switch to parenthood, but also nothing as rewarding, it’s been ace, but at times hard to juggle all the hats I seem to wear.”