Skip to main content
Log In Register
What the Cape Epic lacks in absolute riding distance, it compensates for in harsh, technical terrain. We take a closer look at what riders can expect come 19 March 2023 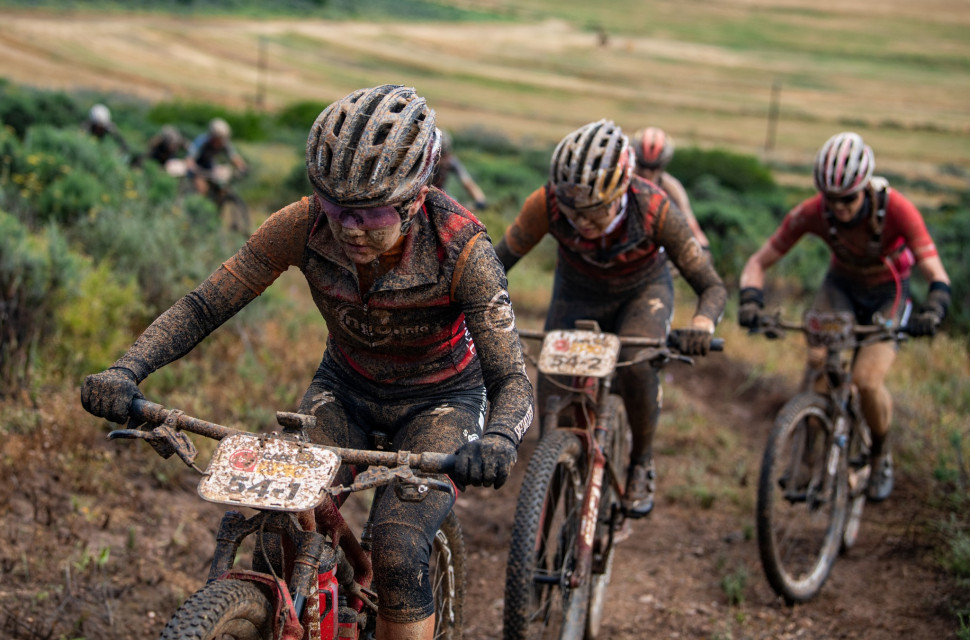 South Africa’s Western Cape region is globally renowned as a desirable tourist destination. But each year, more than 1,000 mountain bikers suffer something terrible across its off-road topography.

For Cape Epic riders, the natural beauty and wilderness are juxtaposed by unrideable gradients, exhausting heat, choking dust and loose, rocky, singletrack. The Cape Epic isn’t marketed as a fun event. It trades on the legacy of being hardcore - an extreme test of endurance mountain biking.

Excluding the prologue, which is mild and often lulls riders into a false sense of security, the Cape Epic is a week of brutal off-road riding.

Cape Epic organisers and route builders use the event’s stages for whittling the field. There is a Queen Stage on each Cape Epic, meant to be the true gatekeeper between most riders and a finisher’s medal.

So what’s the 2023 Cape Epic route like? The headline statistics are 658km/409mi of distance and 15 775m/51 775ft of climbing. But as with all mountain biking numbers, context and interpretation are everything.

What the Cape Epic route might lack in absolute riding distance, it compensates for (and then some), in terrain texture. Most of the Cape Epic’s climbs and singletrack sections are raw. The average Cape Epic stage is really harsh if you are accustomed to riding smooth forest singletrack or climbing up perfectly maintained fire and forestry roads. Loose shale, rocks, dust and a lot of ‘naturally degraded’ trail awaits Cape Epic riders.

The Prologue is not on Table Mountain in 2023 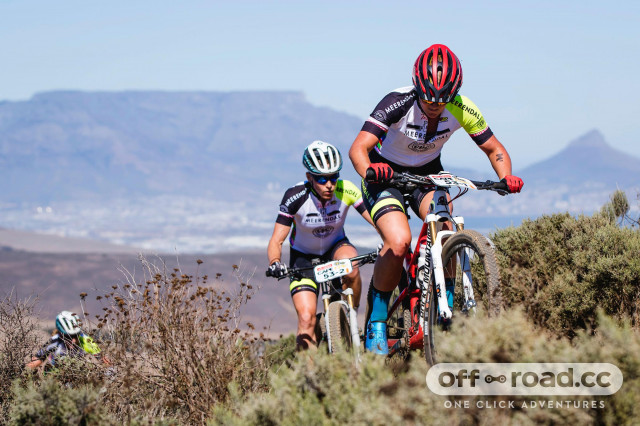 The 2023 Cape Epic heralds a return to Cape Town’s northern trails, with a Meerendal Prologue. This is not a new venue for the race, but it was last used in 2018.

With the Cape Epic scheduled for a return to Meerendal’s extremely dusty corners, front-wheel washout will be a significant risk on any of the singletrack descents. The Cape Epic is renowned for a high prologue failure rate, with overconfident riders underestimating the risk of the event’s ‘warm-up’ stage.

Despite their superior fitness, Northern Hemisphere riders often struggle to adapt to the Cape Epic’s dusty descending trails and the Meerendal prologue will be an early warning. In 2017, former South African rugby international and 1995 World Cup winner, Joel Stransky, crashed heavily during the Meerendal Prologue, ending his Cape Epic. 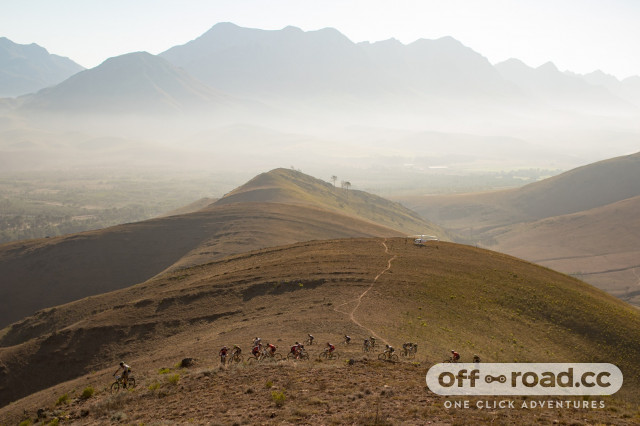 From the northern suburbs of Cape Town, the event will transfer to the Overberg and the town of Hermanus, for stages 1 and 2. This area is known for its whale watching, but also for the wind. Riders can expect sandy trails and the potential of vicious winds sweeping in from the Indian ocean.

Stage 1 totals 98km/60mi and 2550m/7777ft of climbing. It will take in much of the world-renowned Hemel and Aarde (heaven and earth) valley. This area is one of the world’s most spectacular wine regions and has an extensive network of sandy singletrack, used for the three-day Wines2Whales stage race.

The risk on stage 1, is a heat surge. Although riders will have a view of the ocean close by, the moderating influence does not necessarily extend to all corners of stage 1’s route.
Stage 2 adds distance but reduces the climbing burden. Statistically, the longest distance riders will complete during the 2023 event at 116km/72mi, stage 2 has a mild 1850m/6069ft of climbing. It takes the Cape Epic field to the village of Stanford before turning inland, away from the ocean. Whereas heat could be the issue on stage 1, the wind will be the arbitration point on stage 2.

As riders venture deeper into stage 2, they’ll be more exposed to the open wind channels that can deliver vicious headwinds across the Overberg region’s rolling hills.

Stage 3 is a transition day, with riders moving from the Hermanus area to Oak Valley, in Elgin's apple-growing region. At 108km/67mi and 2600m/8530ft of climbing, stage 3’s vertical challenge will be mediated by some excellent forest singletrack and inspiring orchard sections.

A Wines2Whales theme will feature strongly at the mid-point of 2023 Cape Epic, with many of the stage 3 trails familiar to riders who have completed South Africa’s most popular three-day stage race held every October/November. 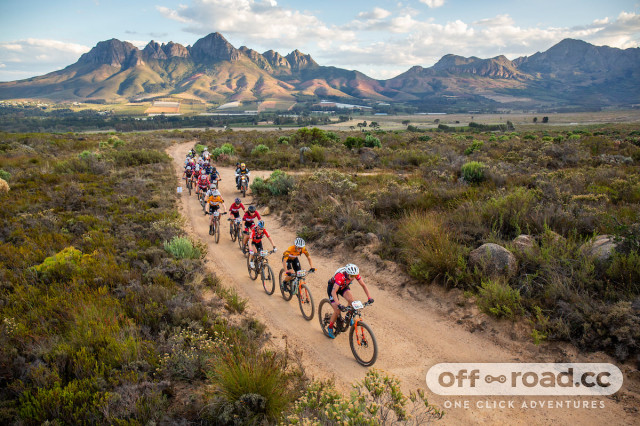 An interesting aspect of the 2023 Cape Epic’s first three stages is that none are exceptionally brutal. Organisers are known for including a queen stage early in the event, to thin the field. But unless there is a dramatic weather event on stages 1, 2 or 3, with extreme heat or wind, most riders should make it to Oak Valley.

Stage 4 is the shortest day at the 2023 Cape Epic and promises to be the most fun. Configured as something approaching a time trail singletrack stage, stage 4 only routes for 47km/29mi and climbs a mere 875m/2870ft.

Struggling riders will benefit from a later start for stage 4, allowing those amateur competitors who are fatigued to sleep in a bit and recover. Oak Valley has terrifically forest singletrack trails, and for most riders, stage 4 will be a play-and-recovery day. 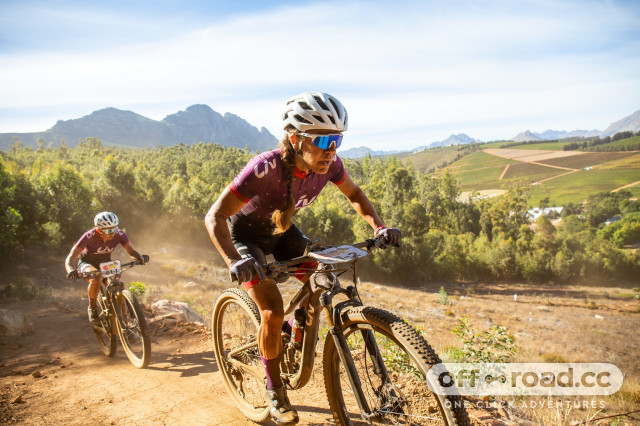 When riders awake on the sixth day of the event, ready for stage 5, they might feel confident after a fun trail riding experience at Oak Valley. But any sense of assurance will give way to trepidation when they check the route profile taped to their top tube.

Stage 5, from Oak Valley to Lourensford, is the 2023 Cape Epic’s queen stage. The one meant to reduce the field in size and guarantee that those riders who get a finisher’s medal, truly earned it.

The numbers associated with stage 5 aren’t overly intimidating. It covers 102km/63mi with a healthy 2450m/8038ft of climbing. But what those route statistics don’t convey is the terrain.

To get from Oak Valley, in the Elgin area, to Lourensford, in the Helderberg basin, there are dramatic Western Cape mountains to traverse. And the climbing sections on stage 5 will be loose, forcing many riders to walk. The change in muscle recruitment, between riding and pushing up loose Overberg terrain, will be the undoing of those Cape Epic riders struggling with fatigue or injury, starting stage 5.

Heat will add to the drama. At this year’s Cape Epic, stage 1 routed from Lourensford through the Helderberg area and saw a massive attrition rate among riders. Riders could suffer an additional psychological challenge on stage 5. The Cape Epic field could be in a position to suffer debilitating heat fatigue on stage 5, despite having a cool ocean in their field of view, which cruelly doesn’t provide them with cooling airflow.

Does it get easier after the Queen Stage? 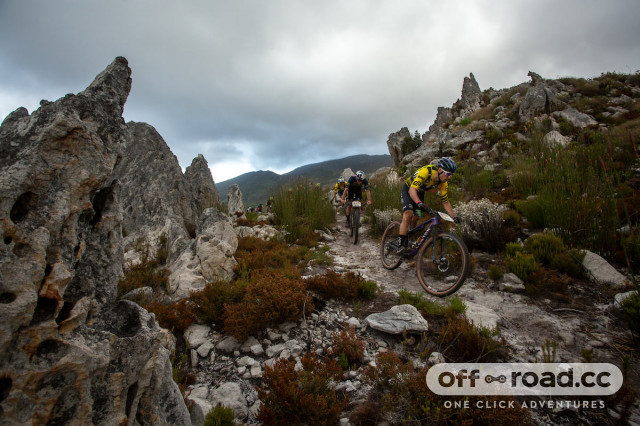 For riders who survive the queen stage, a start and finish at the historic Lourensford estate await for stage 6. This has traditionally served as the start of stage 1 on Wines2Whales and features several great singletrack trails.

At 82km/50mi and 2300m/7545ft, stage 6 is another deceptively challenging stage, belied by its numbers. There are many places in the Helderberg, which frames Lourensford Estate, where very little wind movement happens. And oppressive heat settles. Riders willing to carry the burden of a hydration pack, or have a frame that accommodates three bottle cages, will find their water management an advantage on stage 6.

The Cape Epic isn’t done until it’s done. It sounds like a statement bordering on the obvious, but on the last day, it isn’t a given that all starters will finish. Similar to riders underestimating the risk with a Cape Epic prologue, those who have survived until stage 7, cannot assume they’ll merely ride to the finish, chatting away.

Stage 7 features a few very steep climbs for riders to get out of the Helderberg, past Stellenbosch, and into the Banhoek valley, towards that Val de Vie estate finish. The distance won't be an issue at 78km/48mi, but the climbing gradients could be, with a gradient profile of 2400m/7874ft. And there’s the reality of technical descents and tired riders, too.

On stage 7, riders will be expected to conquer several short and steep climbs that will be brutal on fatigued legs. The other issue is fast singletrack descents. Some of South Africa’s best and fastest, singletrack trails are part of stage 7. The speed and technicality of these descents could undo tired, injured or nervous riders. Especially those unfamiliar with ‘reading’ the traction and grip texture of very dusty switchbacks.