Skip to main content
Log In Register
Swiss shredder Nino Schurter is quite possibly the greatest cross-country racer of all time. This is his story 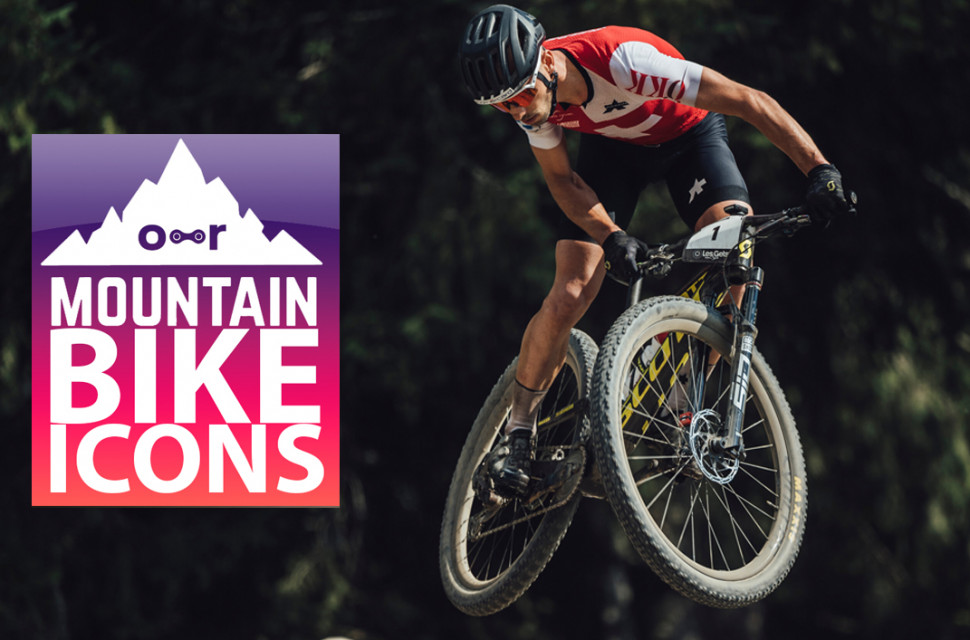 There’s just something special and exciting about watching Nino Schurter riding a mountain bike in anger. It’s a meld of Swiss precision and class, mixed with a double shot of artistic prowess and then garnished with a sense of fun – it’s a magical potion, and one that just draws you in and makes you want to race bikes like the man himself.

As the 2022 mtb season drew to a close, all eyes were on the young guns when the rainbow-stripe batted for UCI Mountain Bike World Championship titles came around, and yet, for the 10th time in his career, Nino flipped the tables and stamped his name well and truly into the history books by taking the honours.

When this is combined with his seven junior, U23 and team relay titles, his 2016 Olympic gold, eight overall World Cup victories and 33 individual round wins it surely makes him what must be considered the true GOAT of XCO racing. Let’s not forget his Olympic gold medal, Cape Epic and Swiss Epic stage race victories either.

Where it all began 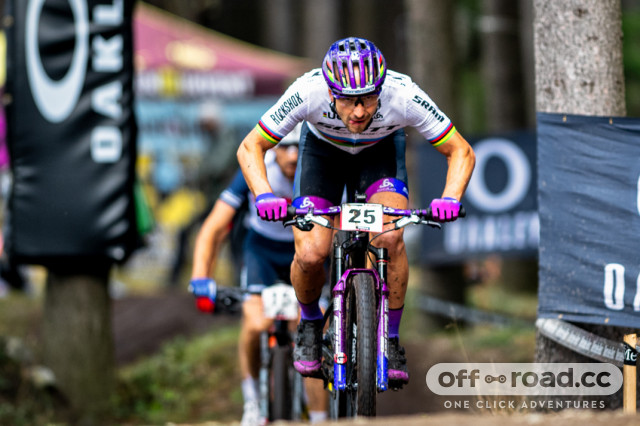 Just like most other kids, Nino got started riding off-road at an early age, along with his older brother Mario. “He was the best competitor I could think of. He’s a bit older than me, and even more gifted with talent - he was the one to hang on to. He indeed had a great influence in my early years.”

The young ShCurter brothers inadvertently honed their trail craft early. “My very first bike was a BMX because there were no good kids bikes available at that time. On those bikes, we chased all through the town and built jumps. I grew up in a tiny and remote mountain town in the Swiss Alps, surrounded by challenging trails.”

The duo opened their competitive journey by riding downhill mountain bike races, which goes a long way towards explaining Nino’s unrivalled skills when the going gets fast. However, he soon realised that his riding talents had a more rounded leaning. “I entered the Swiss Bike Cup, which was the racing series for kids. With having success in XC from the beginning I stuck with it. Meanwhile, my brother focused on DH.”

It’s far from unusual to see Nino showboating mid-race, pulling air on jumps, and generally entertaining the crowd. In fact, it could be said that he has very much led the way to transform what could simply be a slog for dedicated fans into an entertaining spectacle; he makes cross-country mountain bike racing exciting - for all.

How does he pull this off under the heat of competition? “The answer is pretty simple - I love to ride, and I love to race my bike. This may sometimes seem like I show off. But, I’m not sure if I do it for the fans or just because I like to have fun whenever possible.” 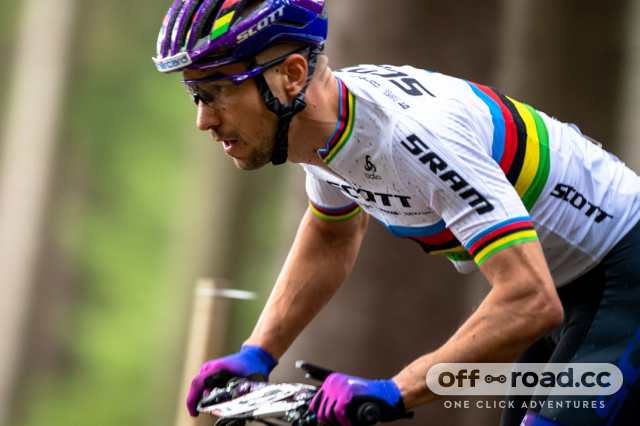 In recent years, we’ve seen the likes of Mathieu van der Poel and Tom Pidcock switching cycling disciples seamlessly and dominating on and off-road. Up until recently, that would have been seen as heresy and most pro road teams would not have allowed such a thing to happen (and with many, it’s still the case).

Despite trying the split season thing - racing on the road with the GreenEdge team in 2014 - Nino has remained dedicated to cross-country Olympics (XCO) racing.

“It was a great experience for me - to race the Tour de Romandie and the Tour de Suisse on a WorldTour team. However, MTB is my discipline. I like to be at the start line going for the win. In order to be successful on the road, it would require me to fully focus on that. I don’t believe a mix of both would work out for me in the long term.”

He also recognises that his nature may not fit into the big team mindset or pro road racing. “I’m also, maybe too much of an individualist to fit into a large road team. I stick to what I’m best at - that’s racing XCO.”

One team, one dream 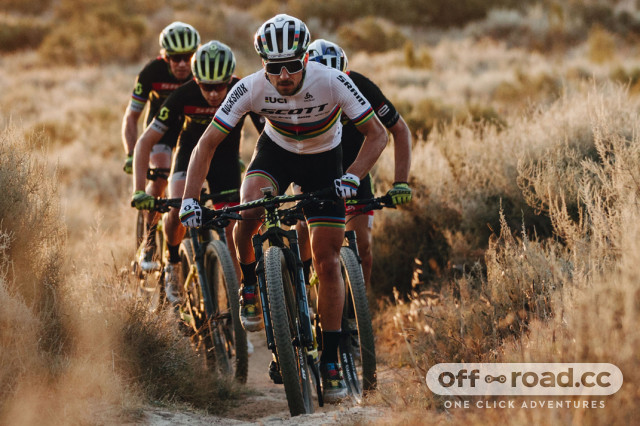 From a very young age, the talents of Nino garnered the attention of another Swiss legend of off-road racing, Thomas Frischknecht, who despite then still being an adversary on the racetrack took the aspiring Nino under his wing – and, after all, he was the heir apparent to a great legacy.

Throughout his lengthy career, Nino has remained under the winning spell cast by Frischi and his Scott-SRAM racing team.

“Over all the years I have been happy with what my team has to offer. I feel comfortable in this team, and also have some influence in how things work within the team.”

“Also, I’ve had the same coach throughout all of those years. I like to keep things as they are - as long as they work out fine for me. Never change a winning team!” 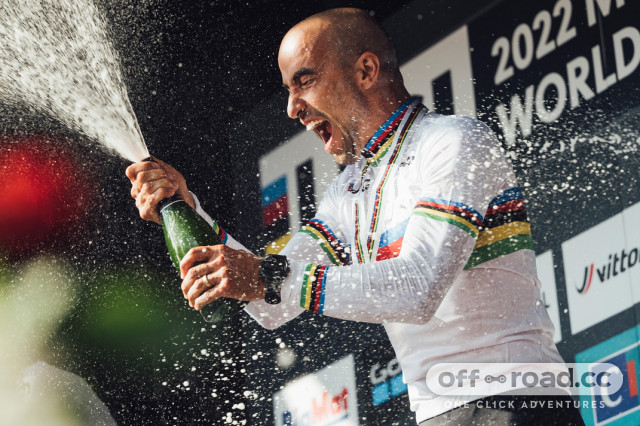 What have been the standouts of his career, so far?

“There are career highlights of different aspects. From the sporting side, it is surely the Olympic gold medal in Rio 2016.”

“From the emotional side, it’s probably the 2018 World Championship title in Lenzerheide, which was in front of a huge home crowd.”

The lows and regrets?

“There’s nothing I regret. If something doesn’t go right I look forward and try to do better. For example, in the sprint finish at the London Olympics in 2012; I lost the gold medal to Jaroslav Kulhavy in a very tight finish. At the moment I did regret not doing better, and yes it was a low point - at the time. But, I tried to do better at the next Olympics. Looking back, in order to win in Rio I needed that second place in London.”

Defying the odds of time 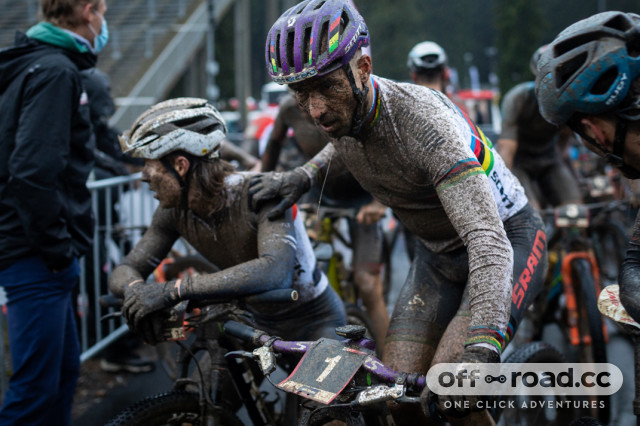 Many pundits predicted that Nino had served his time at the top of the great podiums when 2022 came around – and yet when push came to shove the 36-year-old ace turned on that Nino magic button and defied the odds and predictions. Not only did he win the 2022 World Cup outright, but he also even mildly surprised himself by taking the World title, yet again.

“Indeed, things did not look very positive going into to the 2022 World Championship. Less than a month prior I had a severe crash at the Snowshoe World Cup, which interrupted my build-up for Worlds quite a bit. On top of that the competition was very high. Everybody talked about Tom Pidcock. Many saw him as the new World Champion. It felt good having a change in the role  - being considered an outsider. I did believe in my chances, and I raced for the win. It was not as much of a surprise as it was a satisfaction.”

Where does it go from here?

Surely, at some point time will catch up with Nino, yet as he demonstrates time and again his love for racing and riding is not wavering any time soon – does he himself see the great career fishline anywhere on the horizon?

“First of all, I still love what I'm doing. As long as I’m successful in racing I will continue. As the current World Champion I have no reason to quit.”

“But I’m also aware that things can change quickly at my age. I don’t see myself racing the World Cup and not being able to step on the podium anymore. I take it year by year.”