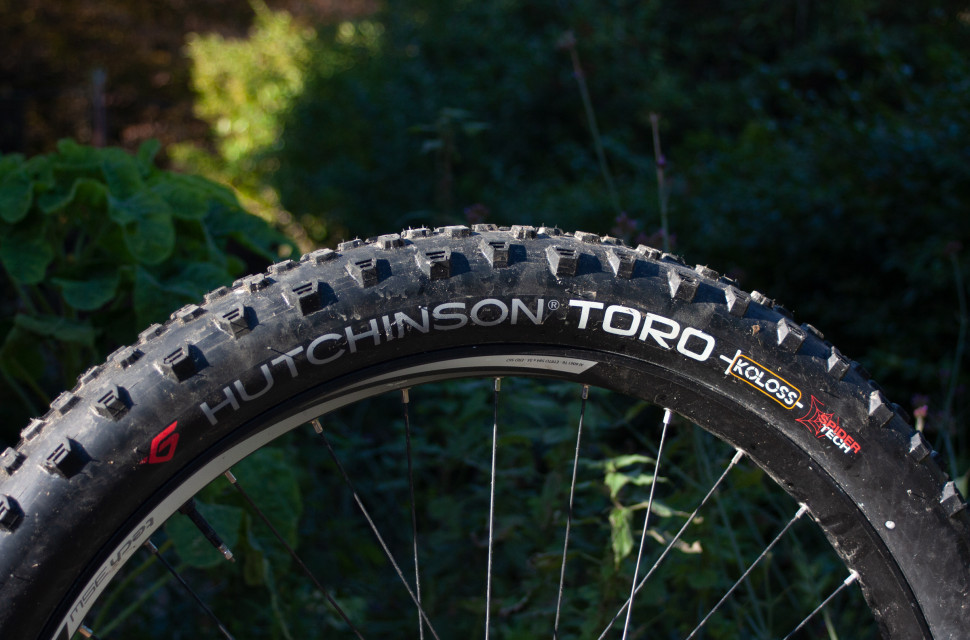 With its monster carcass and large tread pattern, Hutchinson's Toro Koloss is the supersized version of the regular Toro tested last year. The main difference is that its best as a front tyre now, digging reliable grip from its large contact patch and chunky knobbles, but the added weight makes for a draining ride at times.

The Toro looks completely and utterly cartoonish when first mounted. There's no getting round the fact it's huge, and despite being officially a 2.8in width, I think it creeps into 3in territory – almost out of the plus tyre bracket and into the fat tyres.

Whatever your perception, the Toro Koloss is flipping chunky with a weight you can really feel on the bike. 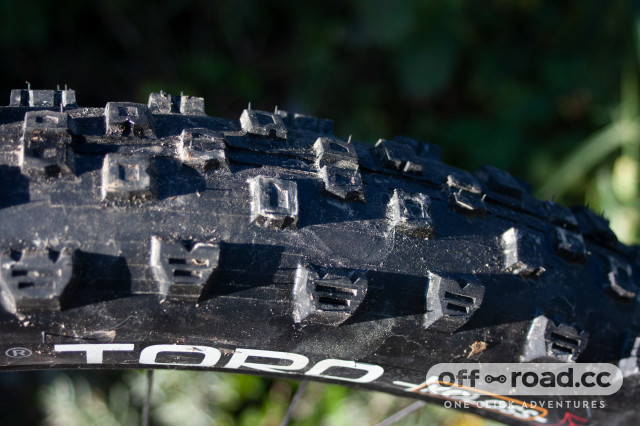 The profile is aggressive with tall, wide-spaced blocks – those are 20mm gaps between the outer knobs. The smaller central chunks are closer set, which adds both rolling ability and bite for straight-line braking.

Blown up on a wider rim (30mm+) it comes up nice and square, while Hutchinson's double-layer SpiderTech sidewalls and puncture protection strip under the tread add useful stiffness to help maintain their shape. The Toro Koloss feels thick and reinforced enough for its aggressive intent, but not overly thick – this isn’t a tyre that needs any extra material!

The gap between the central and outer blocks is large, great for clearing mud but seemingly ripe for a thorn or slash... though to be fair, I suffered neither, so either the protection or my luck has held. I can't say the same for the shape at very low pressures, however, as the gaps let the tyre deform under cornering without a reasonable psi to hold them up.

On the upside, those tall blocks haven’t torn or worn badly at all, and there's no sign of unusually high wear anywhere else either. 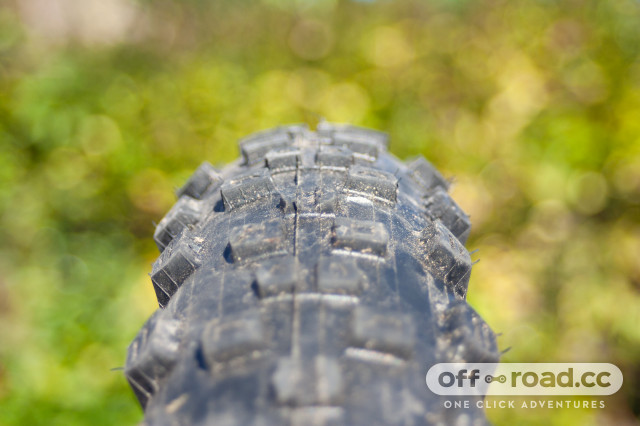 This tyre fits happily onto my wider test rims (32 and 35mm internal), and is pretty easy to get on, though I did have to use pressure shots to get the bead properly mounted. It holds air well and created no sidewall issues with sealant.

I ran it pretty firm at first, mainly to see how the blocks would feel – their sheer size seem to promise squirming. However, they don’t actually create too much of an issue when you lean or brake hard, and the feel as they deflect or slide is as trustworthy as many 'normal' tyres I’ve ridden.

Easing off the pressure does mostly cure the issue, but obviously rolling speed suffers. Go too far and the extra drag leads to a slow, unreactive front wheel that – whilst very sure-footed – is ponderous and hard work on anything but downhills. At times on mid to low speed corners, it can almost stall, and you have to really force it round.

On climbs where you want to just pop the front wheel up, it fast becomes a chore to repeatedly lift. On the other hand, it's so big you can simply steamroller some stepped or rough blocks...

Hard cornering is pretty good in deep tacky mud, where it finds grip unless a root makes it slide, while in sandy or snowy conditions, that large volume creates traction and clears well.

On drier or harder trails grip is merely okay. Here the gaps become more noticeable, allowing a lot of deflection as the blocks bounce off hard edges. Away from the soft stuff, the Toro Koloss feels a little too lively.

This tyre is going to suit a pretty specific rider: one who maybe uplifts, likes loose muddy downhilling, doesn't like mudguards (they may lack clearance), and maybe wants to add some extra 'bombing' ability to a mid-travel bike. This isn’t a tyre for riding laps at a bike park, and it's not one for long, winter rides: the weight is high, and it doesn't offer much more grip than a spikier, skinnier tyre.

If you ride mainly rough, wet, loose and muddy trails downhill, the Toro might be worth a look – but I feel it still lacks that real ‘bite’ you might expect in return for carrying its ponderous, slow-rolling weight.