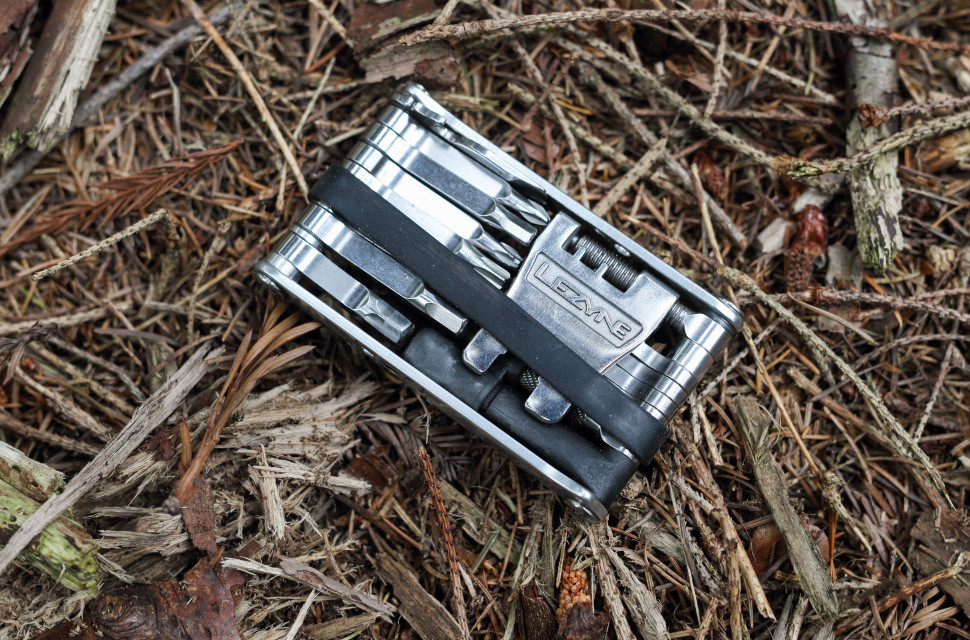 Liam Mercer
|
Sep 7 2022
|
Overall
Quality
Performance
Value
What's good?
What's not?
Buy if...
You have a bit of cash to spend on a very comprehensive multitool and rarely use Torx bits

Lezyne’s Super SV 23 is a bike repair powerhouse. It comes equipped with almost everything you’ll need for most trailside mishaps, making it one of the best multitools for mountain and gravel bikes. For the most part, it’s a pleasure to use, however, I’ve found some of the tools to be a little soft, and easy to round. It’s also quite expensive. 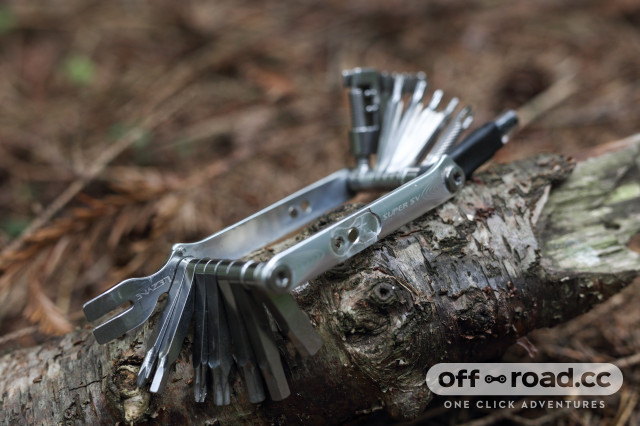 Living up to its name, the Super SV 23 comes with 23 tools with Allen bits ranging from 2mm up to 8mm. There’s then Torx 10 up to 30 with a Phillips screwdriver and a chain tool. All of that is pretty standard for most multitools, but this one has a rotor truing fork, disc brake wedge, and a bottle opener built into one piece of steel. 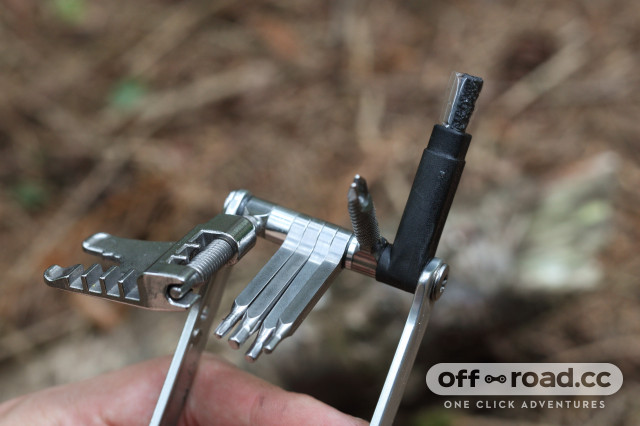 There’s also a serrated tubeless plug insertion tool that’s accompanied by a plug carrier with space for two fat plugs, or even more thin ones. The chain tool has four spoke wrenches and there’s a handy quick link holder and a rubber band holding everything together.

All of this boasts a stainless steel build with a claimed weight of 156g though, in reality, it loses a gram on my scale. It measures 9cm in length, 5.2cm wide and 1.5cm deep which is an impressively pocketable size considering the number of tools on offer. 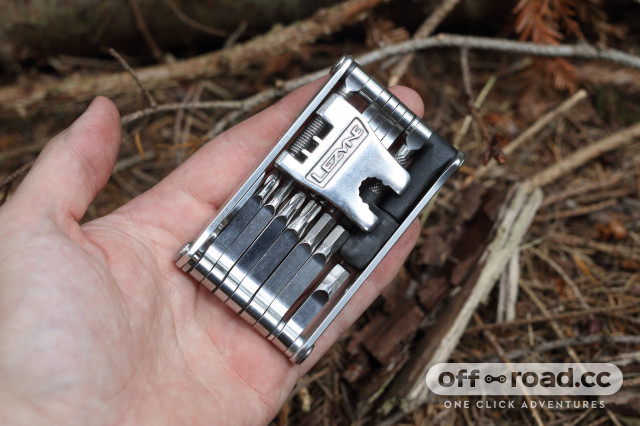 The SV 23 is quite a wide chap but when turning bolts, its width never became a hindrance and actually, it offered an extra bit of leverage when undoing stubborn fixings. It's comfortable to use and only became a bit of a handful once the tools loosened with time. This is curable, but there’s a bit of oversight because you need two Torx keys of the same size to cinch it up. This has me fishing around for spare multitools to find a second Torx to get the job done. 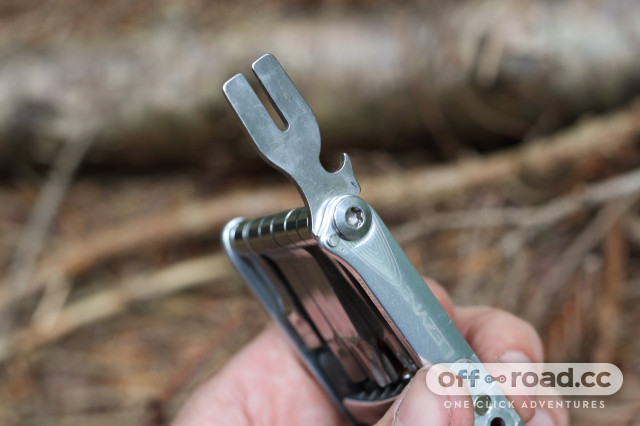 While the mass of Allen and Torx bits are great, it’s thanks to everything else that the SV 23 becomes really useful. The inclusion of a small tubeless repair kit is mega handy and has saved my bacon more than once. The same goes for the disc brake wedge. Often, I nudge my front brake whilst loading my bike, so it’s incredibly useful to have this close to hand. 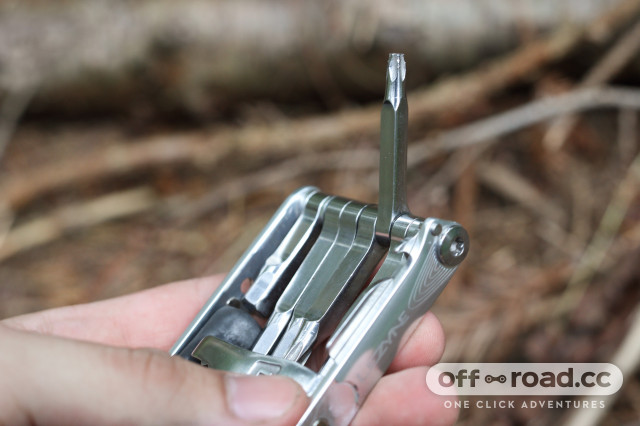 However, when it comes to the stainless steel build, the Torx bits quickly come into question. When nipping up bolts with the correctly sized T25, the bit has rounded with impressively little force behind it, and since then it’s been rendered totally useless. Issues also arise with the T10 as it tapers, or rounds towards the end, stopping it from engaging properly with bolt heads.

All other Allen heads and the T30 have been absolutely fine in use.

Even though the SV 23 is absolutely packed with tools, £62 is quite an asking price. To compare, my favourite little tool, the Topeak Mini PT30 is £22 cheaper and it comes with almost everything you’ll find on the SV 23, bar the disc truing tool, built-in tubeless plug holder, and the bottle opener, although if you’re creative enough, anything can be a bottle opener.

The Mini PT30 is also smaller and comes in a neat neoprene case. You’ll just need to carry your tubeless plugs separately. It is weightier though, at 169g.

Then there’s Topeak’s Alien X at £55 which comes with a huge collection of tools, including quick link pliers and a valve core tool. Though this is built around a plastic build and it’s a chunky beast. What the Super SV 23 has that others don’t is the impressive array of tools in such a compact package.

If you’re looking for a multitool packed with features, a sleek aesthetic and a slim profile, the Lezyne SV 23 does a great job, but only if you don’t use Torx bolts too often and don’t mind dropping the cash.

Lezyne says, "The Super SV stainless bike multi-tool is the ultimate ride repair tool, developed specifically for today’s modern bicycles. Its ergonomic machined-aluminum side plates offer extra leverage and an integrated magnetic holder for a spare quick link. Each tool bit is meticulously machined from high-grade stainless steel and crafted to be as compact and lightweight as possible. Available in two configurations, with one offering an integrated tubeless tire repair kit, the Super SV series is ideal for any mountain biker or road cyclist looking for the best, corrosion-free multi-tool." I agree with this but Torx bits need to be stronger and better designed.

It is put together nicely and it looks great. Loving the band that keeps everything togther.

A great number of tools in a relatively small and light package but Torx bits are soft and need to be tougher.

No corrosion present at all but Torx bits need to be tougher.

Not bad considering the number of tools it has.

While a little larger than many tools, it offers good leverage and plenty to hold on to.

Expensive for what it is. There are cheaper tools with as many or more features.

It's a great tool that's stayed with me for almost every ride. It's just disappointing that the Torx bits were so quick to round.

Range of tools, shape and weight.

Soft Torx bits, price, and how it needs two identical tools to tighten.

A great tool but not without a few issues and a high price.

Torx tools that are too soft are the enemy and make a mockery of this item's overall score. If the tool isn't up to heavy handed use, which is exactly the type of use it can expect in the wild, it's no use at all. Just buy the Topeak Alien instead...