Skip to main content
Log In Register
Torque Covert 7 Crank Multi Tool review £40.00
A tool that makes clever use of negative space on your bike, though needs further work to become great 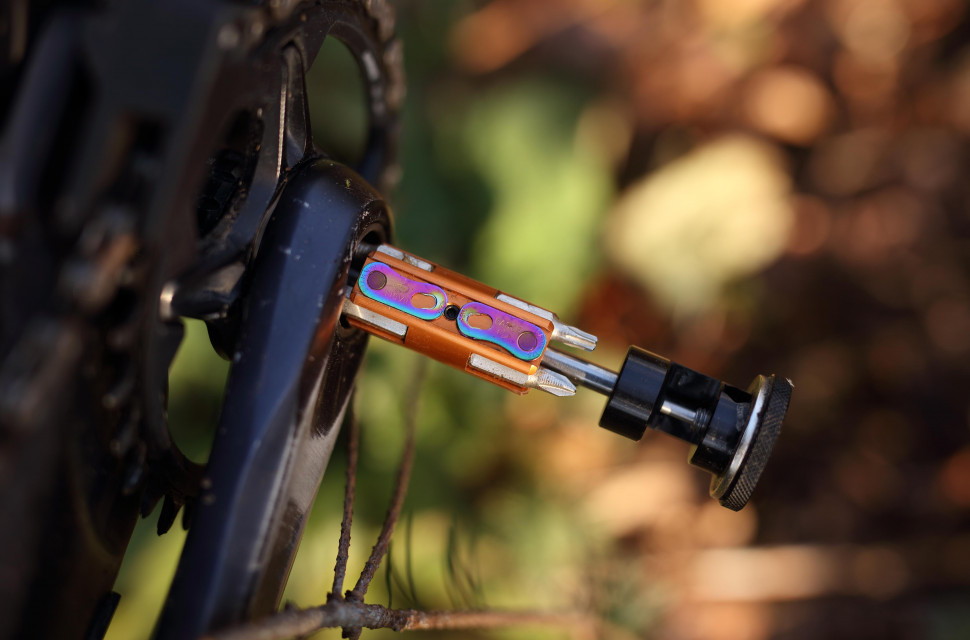 Liam Mercer
|
Mar 4 2022
|
Overall
Quality
Performance
Value
What's good?
What's not?
Buy if...
You want to store your tools on your bike and don't mind some rattling

The Torque Covert 7 Crank Multi-Tool makes clever use of the negative space in your crank. While it’s impressively comprehensive, perfectly secure, and rather nice to use, it falls foul of the greatest sin: it rattles when sheathed in the crank.

The Covert 7 Multi-Tool is designed to sit within your crank’s spindle. Its main body is made using 6061 aluminium, then its chain tool uses a stronger 7075 aluminium. Keeping it hidden firmly inside of a crank is a neodymium magnet.

The range of tools that the Covert 7 comes with is fairly comprehensive. There are 3, 4, 5, and 6mm Allen keys, a Phillips screwdriver, and a T25 Torx. Along with those, there’s the aforementioned chain tool, and Torque has been extra smart and has added a chain link holder. This is a great selection and is enough to sort most mid-ride issues. However, it would be lovely to see an 8mm Allen as this tool is more than capable of unwinding pedals. 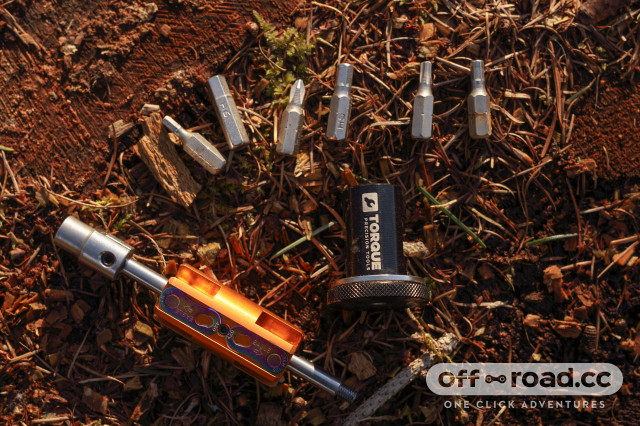 All of those Allen bits click nicely into grooves around the main body, and when it’s their time to shine, it’s easy to pull out the one you need and pop into the hinged and magnetized ‘head’. This is where the tool really comes into its own compared to more traditional multitools. Because the head is able to turn at a 90° angle, the main body summons up a very respectable amount of leverage, so much as that it’s found a welcome use as a quick-to-hand workshop tool. Though this is why I’m a little disappointed an 8mm wasn’t included, while I’m certainly not heartbroken as, at the end of the day, it’s not a fully-fledged workshop tool.

As for the chain tool, it simply unscrews from the main body and uses the tool’s 3mm Allen to push a chain’s pins. On the body of the chain tool, there are a couple of Allen-shaped holes where you could pop in a couple of the bits if you’re after a better grip and a bit more leverage. 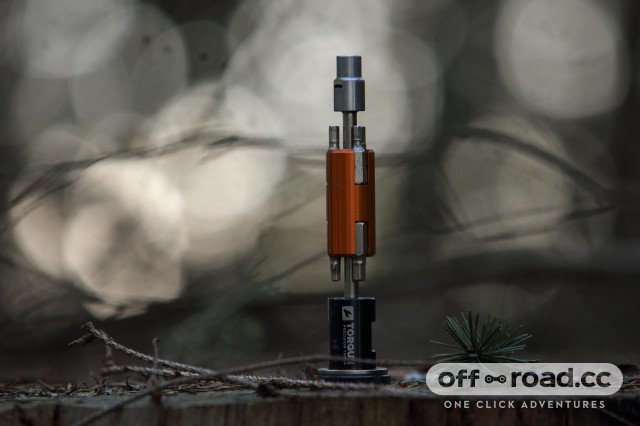 So the tool itself is rather good, and I’ve come to use it pretty regularly, but there are a few flaws. First off, the edges of where the Allen bits are stored and where the head hinges are pretty sharp. I’ve not cut the skin, but I’ve had a few painful run-ins with it.

It’s when it’s stored inside a crank where the biggest issues arise. Not only does it rattle as if its life depended on it when descending, but with each half a rotation of the pedals, there’s a noticeable ‘clunk’. I’m sure there’s a way around this, like wrapping the tool in a cut portion of an inner tube, but out of the box, the noise it creates is rather annoying. For reference, I tested the tool with two pairs of Shimano XT cranks. All other cranks I had close to hand were too small to store the tool. 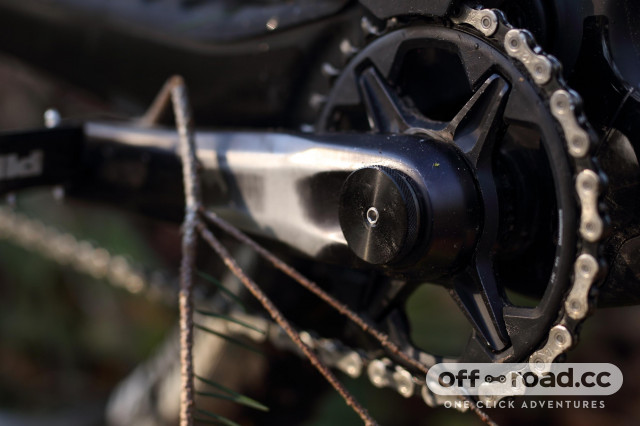 I love bike-stored tools as they reduce faff and bag rummaging, so when this dropped into the office, I was mega keen to get this on my bike. Unfortunately, due to the constant knocking, it’s a tool that I’d much rather keep at home. Like I’ve said, the tool itself is really good if used with care, and thanks to the amount of leverage it offers and its shape, it’s more ergonomic than the usual folding multitool. I just find the rattling massively off-putting.

Further to that, I’ve noticed that the chain tool’s pin slowly works its way out as it’s shaken. Losing that would greatly harm the tool’s repair capability, and it’s not a part of the tool you’ll want to Loctite. 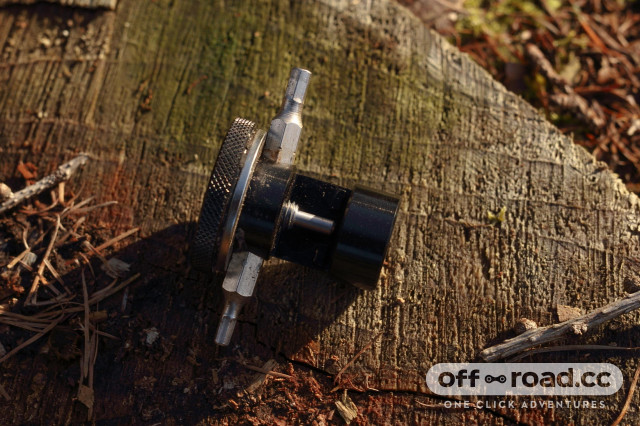 The Covert 7 offers quite a lot in terms of functionality for its asking price. A comparable bike-stored multitool is Granite Designs' Stash RCX multitool that hides inside your fork's steerer without the need to cut a thread. At £49 (at time of review), it offers a few Allen keys, missing several that you'll find on the Covert 7. However, it's designed to work with the brand's Stash system, and it doesn't rattle nearly as badly.

Topeak's PT30 is a folding multitool that comes with even more features than the Covert 7, but of course, without Topeak's Ninja Master system, it can't be stored on your bike unless you resort to frame straps. However, it's small enough to fit in a pocket comfortably, and it's reasonably priced for what it offers. 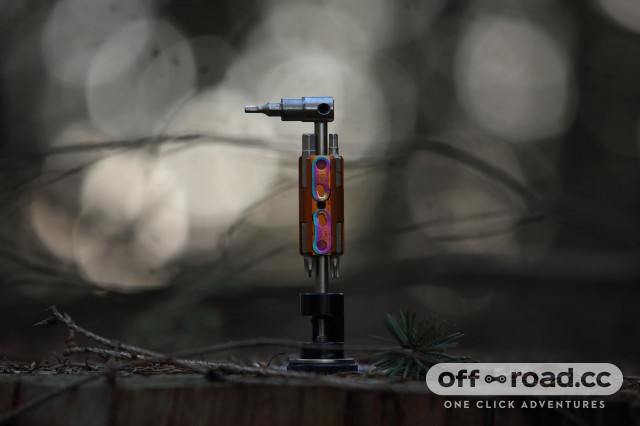 Going back to bike-stored tools. Of course, OneUp’s EDC has even more bike fixing capacity than the Covert 7. However, it’s much more expensive as it’s nearly £60 for the tool, then you’ll need to get a thread tapped into your fork or buy the EDC Threadless Carrier for another £44.

So compared to other bike-stored tools, the Covert 7 is actually pretty good bang for the buck, coming in far cheaper than other options. However, this tool won’t fit in every crank, only those with a hollow spindle that’s wider than 21mm.

If you don’t mind a rattly bike, Torque’s Covert 7 is an impressively comprehensive multi-tool that’s secure, surprisingly ergonomic, well made, and easy to whip out when needed. However, it’s not without a few sharp edges, it won’t fit all cranks, and again, it’s mega rattly. 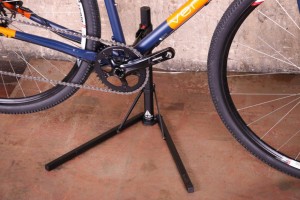 Torque says, "The Covert 7 Multi Tool discretely fits inside hollow cranks greater than 21mm diameter, including Shimano and SRAM." That it does, although I couldn't find many cranks for it to fit into.

Very well made though there are a few sharp edges

A lot of repair power but very rattley when installed into your crank.

Some sharp edges but more ergonomic than folding multitools

One of the cheapest on-bike stored multitools and it's rather comprehensive.

The tool itself is nice to use if you can dodge the sharp edges but it rattles loads when not in use and the chain tool's pin works its way out. Flawed, but a solid base to build upon.

Yes - If they don't mind rattling

A great tool that's super useful but very rattley and not without a handful of quirks.

Did you manage to put up with the rattling to establish if anything may be prone to rusting?

I've found that the Allen bits and screwdriver, etc, have collected some specks of rust though nothing too dramatic. The tool itself has held up perfectly against corrosion.

Did you manage to put up with the rattling to establish if anything may be prone to rusting?