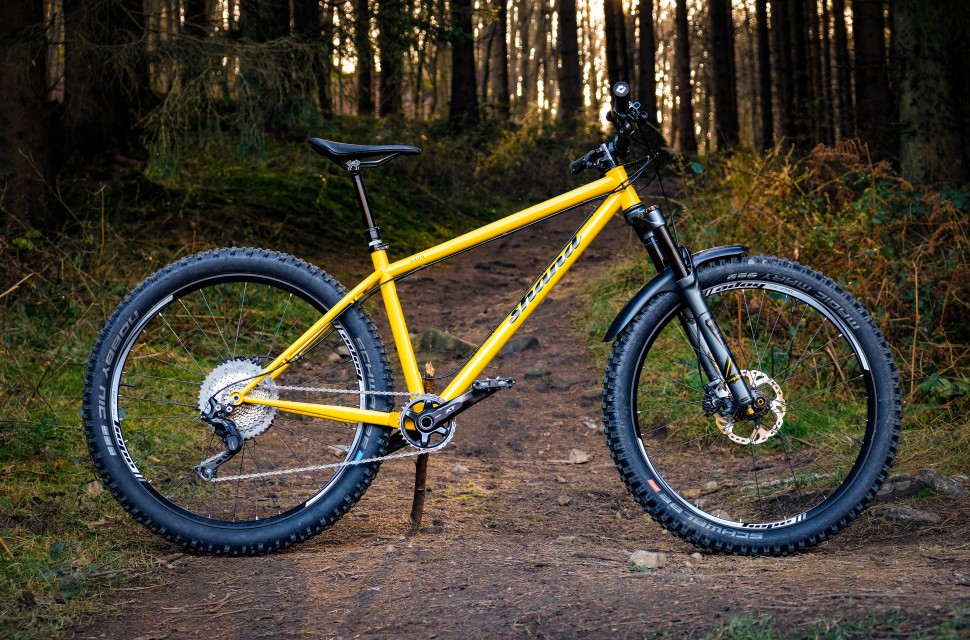 Rachael Wight
|
Feb 19 2019
|
Overall
Quality
Performance
Value
What's good?
What's not?
Buy if...
You want a capable steel hardtail with the option to customise the geometry

The Shand Shug is an aggressive short travel, steel hardtail hero that we’d be very happy to have in our bike stable. The progressive geometry will see you tackling techy terrain and the beautifully made frame will no doubt be the awe of all your friends. If you have the cash to spare the Shug will be an excellent trail bike for those who love the feel of riding steel and like to thrash a hardtail on any type of trail.

The Shug is born from a partnership with Trillion, a while ago a metals group called Liberty House bought both Trillion Cycles and Shand. The two then paired up in terms of design and manufacturing of the bikes and the Shug was created. 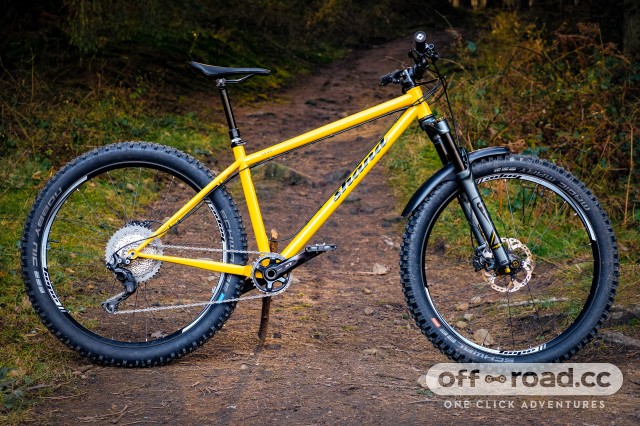 Back in June this year Trillion produced a130mm 29er hardtail as a Shug, it's the same bike we have here but this bike is now being produced in Shand livery, becoming the Shand Shug. We spoke to Fraser from Shand who told us that this bike originally started life as an extreme hardtail he had his heart set on building. After about a year of toying with the idea and altering the geometry slightly to make a really good 'all-round' hardtail the bike came to fruition as Fraser's 'Hoolet'. The Shug is that very same bike, refined for the customer but with its roots firmly in a prototype designed by Shand staff. 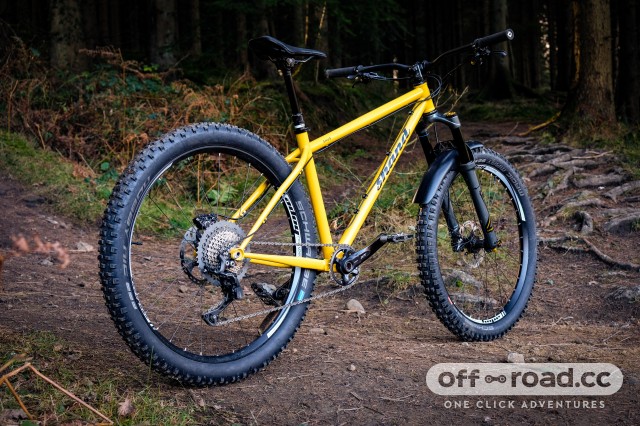 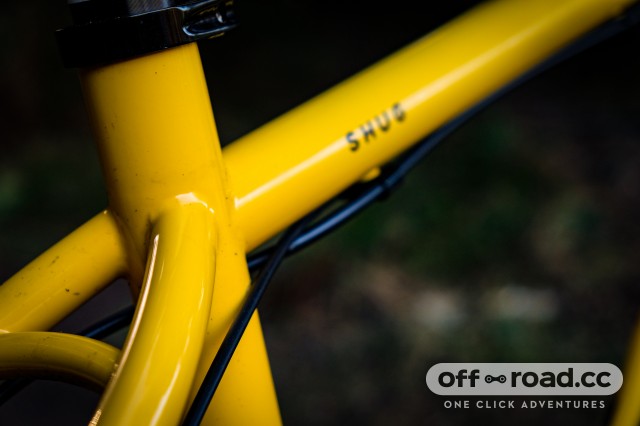 First off the frame is a thing of beauty, made from Reynolds 853 front triangle with a mix of custom Italian tubing at the rear its strikingly simple. I’m a steel fan and love the clean lines of the Shug, the welds are superbly neat, the hooded dropouts are perfectly formed and symmetrically pleasing. The cable routing for the rear brake and mech follow the underside of the top tube, out of harms way whilst the dropper post runs down inside the frame down the down tube and disappears into the bottom of the seat tube. To dot the i’s and cross the t’s , there is a threaded bottom bracket and Boost spacing at the rear making for a modern and easy to live with frame. 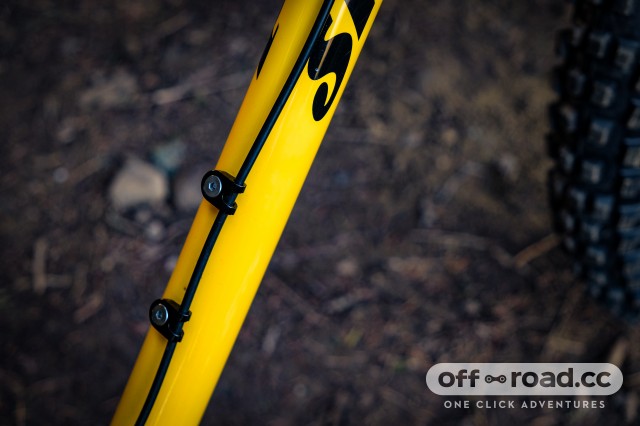 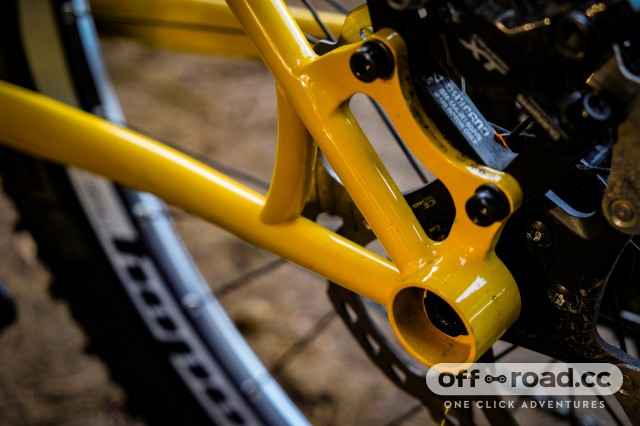 Built to accommodate both 29x2.6" tyres or 27.5x3.0", we received a bike with the latter, a 2.8” Magic Mary upfront and a 2.8” Nobby Nic at the rear. I’m not a huge fan of 2.8” tyres, I find them to give unpredictable damping qualities and they can lack grip in slimy muddy conditions. I can, however see how they might be well placed on a hardtail such as this, the larger volume dispels more vibrations but as an offset of this they also squirmed somewhat which leads to a less than confidence inspiring feel. Given the comfort factor provided with a quality steel frame such as this I’d be tempted to run a 29er set up or size down to 2.5 or 2.6” tyres on slightly narrower 27.5” rims. 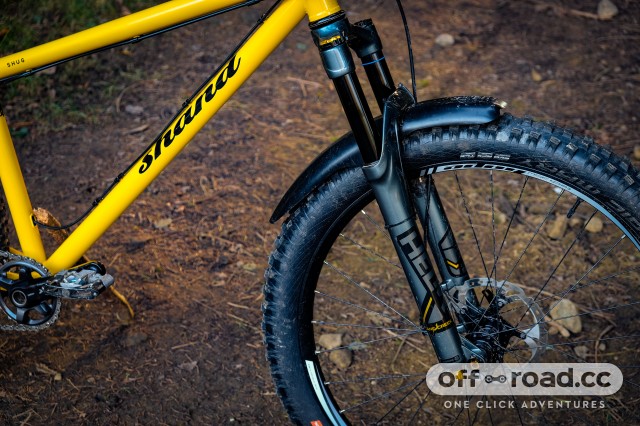 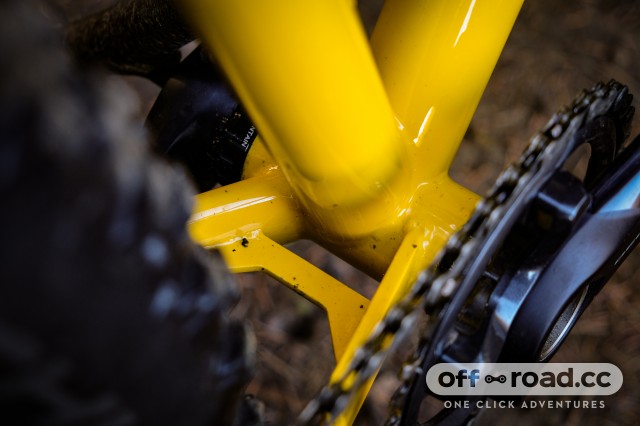 As this bike is available as a frame only that is how I will be testing it, here’s how the rest of the bike was kitted out though; Cane Creek Helm fork 130mm travel, XT 1x drivetrain with 11-46T cassette, Pro handlebars and stem, XT M800 brakes and a Pro Koryak 150mm dropper post. 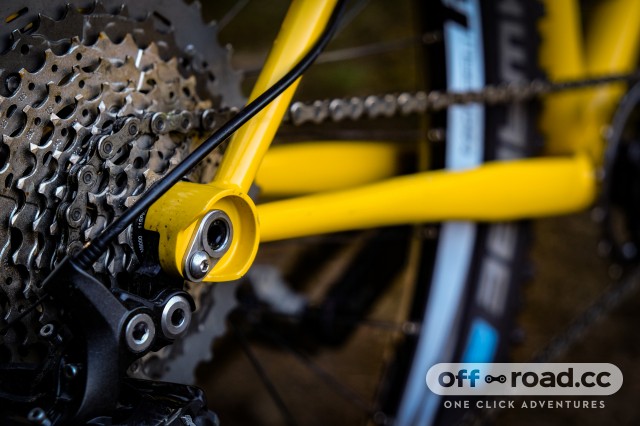 As I have mentioned, the bike gets aggressive geometry, there’s a 64° head angle and a 75°  degree seat angle, the seat tube is nice and short too at 430mm on a medium, the straight seat tube allowing for plenty of insertion room for longer dropper posts. The chainstays are a good 435mm long which is an ideal length for this medium size bike but taller riders might want longer ones as the reach and wheelbase increases to help the bike stay well balanced. The reach comes in at 445m which is roomy enough and I felt right at home. All these numbers add up to a wheelbase of 1209mm, remember though if something here doesn’t quite take your fancy then the guys at Shand can alter it for you. All the bikes are made to order so you’ll just need to chat to them about your requirements and they will do the rest in producing your perfect hardtail. 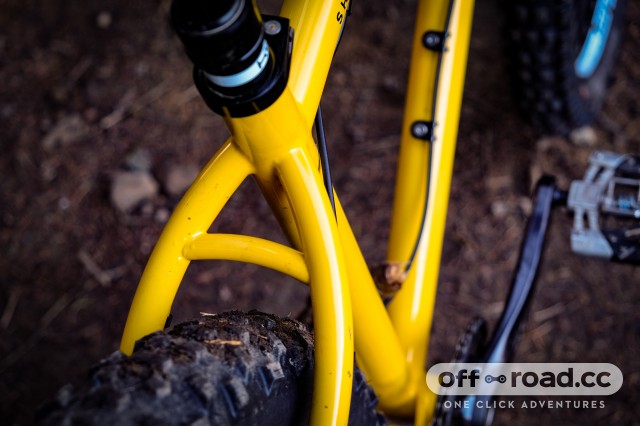 The Shug is a “full on trail shredder” says Shand, it’s a bike that despite it’s short travel is built for taking on more ‘serious’ terrain. It’s happy to take on the steeps as well as the more flowing trails, I did a fair amount of both and can agree, this is indeed a shredder of a bike! After my first ride, I realised that the 100mm headtube when paired with the flat bar supplied was a tad low for me, I swapped them out for a bar with a 20mm rise and adjust the bars so all the steerer tube spacers available to me were below the stem. This allowed me to weight the front wheel more efficiently and I felt less pitched forward on steeper descents. Remember the head tube length can be changed to your personal preferences. 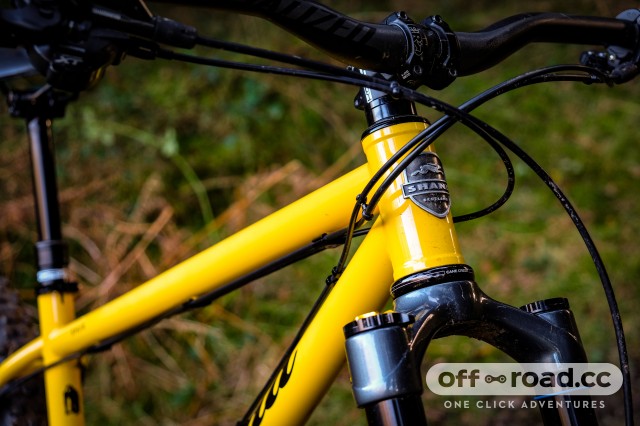 The Shug is a fairly efficient climber, the large tyre volume provides plenty of grip on the uphills and diminishes any rumble from the terrain. It’s comfy place to sit and winch out the climb, at a claimed 2.25kgs for the frame it’s not heavy either. 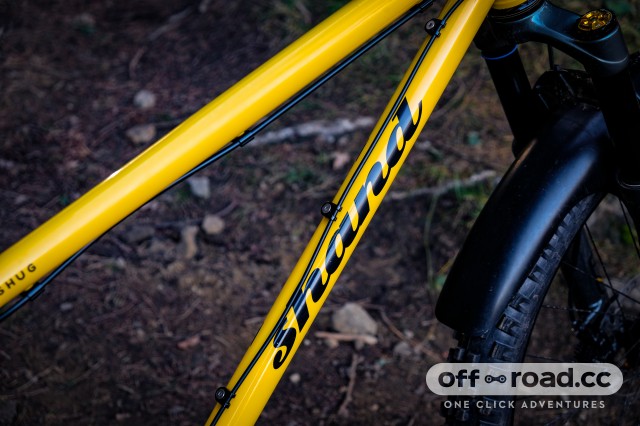 Thrashing the Shug on the trail is immensely fun, it’s a well balanced bike that provides plenty of feed back without the harsh ride that you get from an alloy frame. The steel frame takes the edge of the rattle associated with hardtails, you still have to pay attention to riding smoothly but the Shug frame does go someway to dissipating unwanted trail chatter and maximising grip. 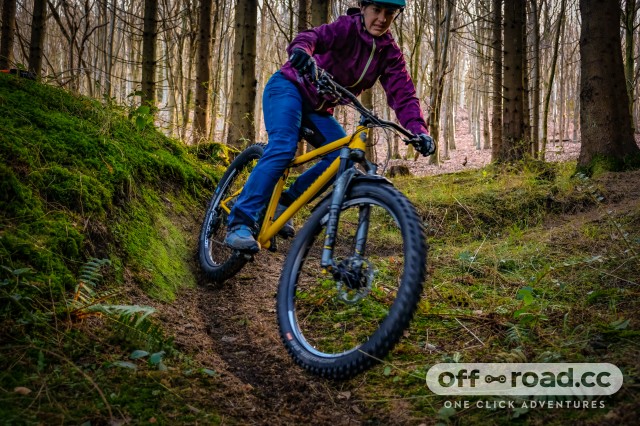 The reach and slack head angle are confidence inspiring on the trail the bike is begging to be ridden down your steep local trails where it’s easy to push it harder and harder, the bike is long enough to prevent any of the choppy kind of ‘fore and aft’ movement you get on shorter bikes making it a stable descender too. At 64 degrees the head angle is slack even by hardcore hardtail standards, at sag, the head angle will be steeper though and it only steepens as you use the travel. Shand has prepared the bike for more aggressive riding by giving the bike a slacker than average static head angle, this bike is ready for anything you can throw at it. 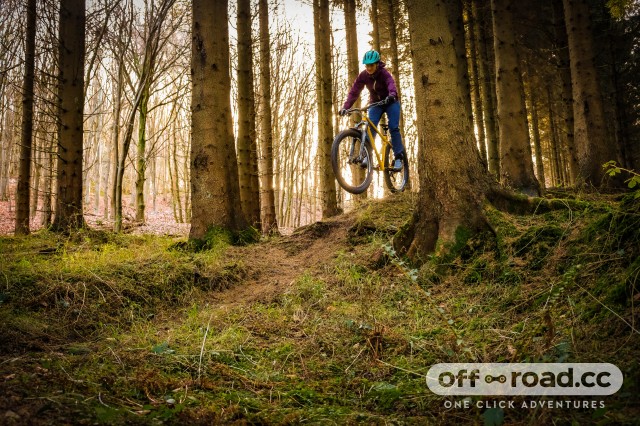 The 130mm of travel is plenty, it’ll keep you on your toes but it won’t land you in any trouble. In this short travel guise I found the Helm to perform well, I was able to set up the fork to provide me with enough ramp up whilst still being pretty sensitive at low speeds, although I did have to run it without much low speed rebound damping applied leaving not too much room for further adjustment. It’d be interesting to get to grips with this fork in a longer travel guise and without plus tyres on a bike and see just how well it stands up to competition. 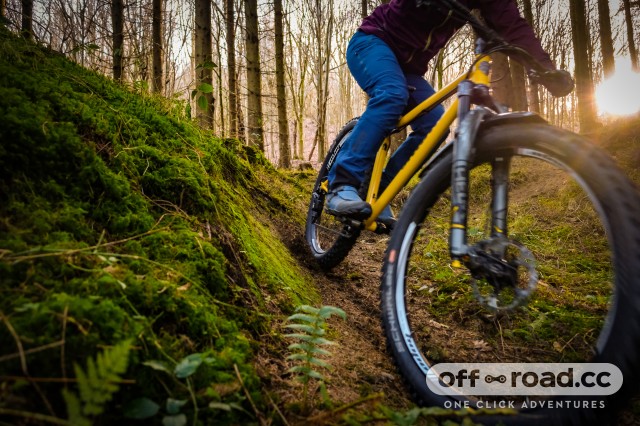 The cost of the frame is £995, not cheap by any means and with the cost of customising the geometry standing at £200 my guess is that if you were looking at buying a Shug, you’d be looking at buying your perfect bike to last a lifetime. And for a lifetime of use, £995 (or £1,595 with the Helm fork) it really doesn’t seem that bad, it’s certainly no more than other quality custom frame manufactures will charge, a BTR Ranger frame will set you back a grand and a Swarf Spline will cost £1,020. 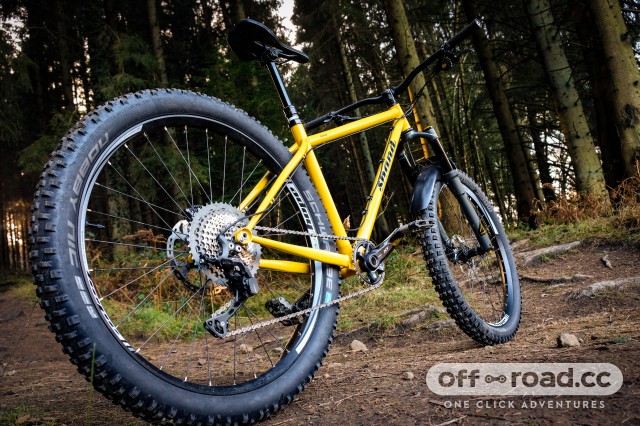 If I had nearly a grand to drop on a hardtail frame then I’d certainly look Shand’s way, the frame is beautifully detailed, it’s a pleasure and not to mention a hoot to ride. It’s an extremely capable bike that belies its 130mm travel. You don’t need more travel to smash up and down trails when the geometry like this gives you confidence in the bucket load.