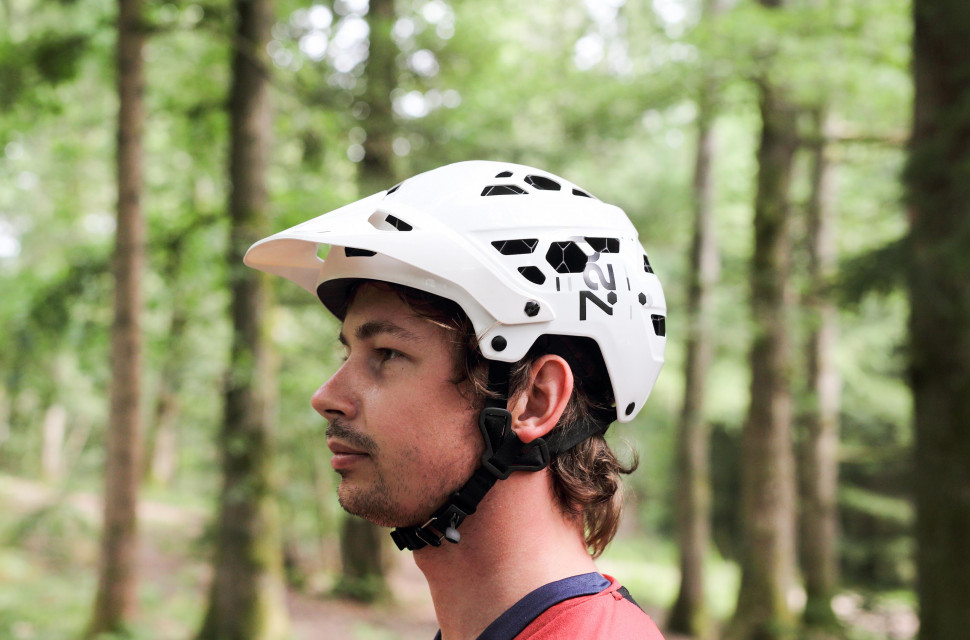 Liam Mercer
|
Nov 21 2021
|
Overall
Quality
Performance
Value
What's good?
What's not?
Buy if...
You want what could be the safest helmet out there

With the Awake 1.0, 720 Protections has rethought helmet tech and has brought in some innovations purely in the name of safety. While forward-thinking tech designed to protect us is always great to see, the execution leaves a lot to be desired, especially when compared with competitive helmets.

720 Protections has really shaken up the way a helmet is built thanks to the HexaGo tech. HexaGo is a bendy honeycomb structure made from HEAP (High Energy Absorption Polymer), which was designed closely with the brand.

It takes the place of both the EPS foam and the rotational impact protection system found in most other mountain bike helmets on the market. But, unlike traditional foam cores, HexaGo returns to its original shape after a glancing blow or a direct impact. 720 Protections recommends against it, but theoretically, that means it could be used again after a crash unless it's taken some obvious damage. 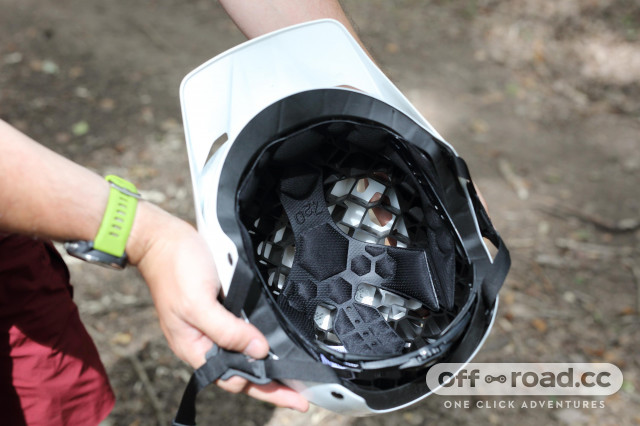 Another benefit of HexaGo is that its open structure encourages a significant amount of airflow because there's so little to block it. This is further enhanced by the helmet's thin plastic housing, which features a whopping 32 vents.

The real magic behind HexaGo, though, is that it has been tested to be far safer than conventional EPS foam. According to 2015 Folksam tests, the Awake 1.0 provides twice as much shock absorption as that required by EN standards. For this, the helmet has won a Red Dot Design Award. 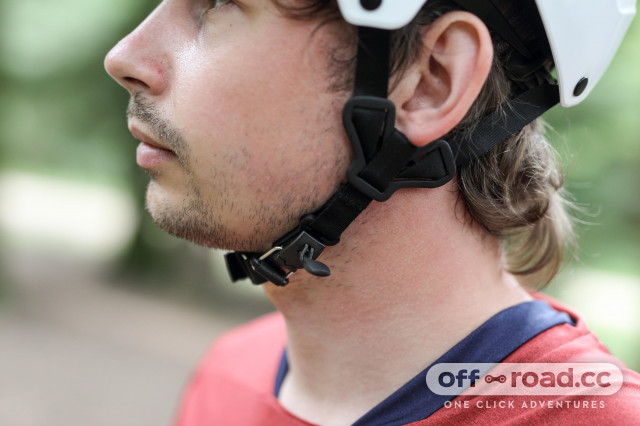 The Awake 1.0 comes with an adjustable visor and retention system (although there's not much adjustability as far as the visor is concerned). It also comes with a Fidlock buckle but this isn't the usual SNAP kind you'll find on most helmets – it comes from Fidlock's new HOOK family. The difference between this and the SNAP buckle and the HOOK is that the HOOK literally hooks in place, then you pull a little toggle to separate both straps, whereas a SNAP buckle is a little bulkier and needs to be pushed in a very particular direction to undo.

The helmet weighs in at a hefty 499g, but the brand has purposely concentrated on safety rather than weight, claiming that the current trend of lightweight helmets hasn't helped improve protection against impact. 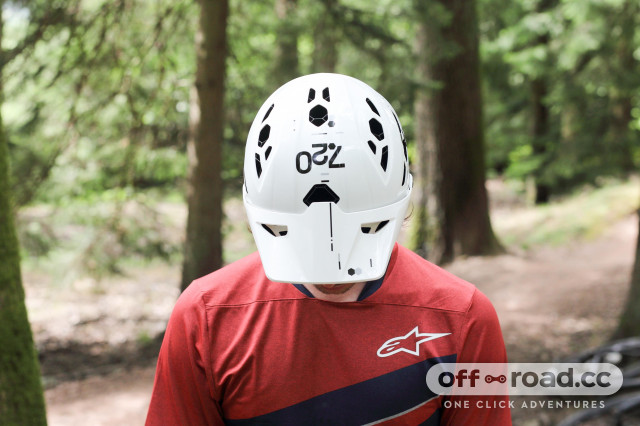 Now, on to how the hat fits and what this super-cool, potentially innovative tech is like to ride with. Before I go any further, I just want to make clear that I can't say much about the safety aspect – I mean, I'm not going to eject myself headfirst into the dirt to see if I can get back up and carry on with my day.

On putting the helmet on for the first time, I didn't find it quite as comfortable as conventional helmets. It feels like it's sitting on top of my head rather than around it. While the cradle does offer some up and down adjustability, the helmet itself sits quite high on the head. 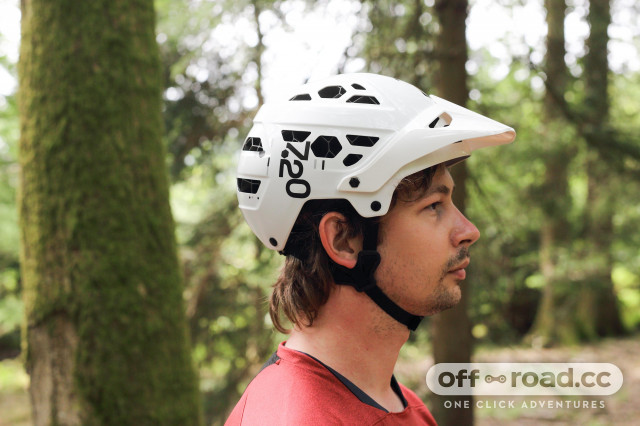 There's not an awful lot of comfort padding either, so it feels pretty harsh, but after some time in the saddle, the harshness is easily forgotten.

With the buckle done up and secure, this is where you find a pretty big problem. The bendy plastic strap dividers aren't adjustable whatsoever. I've got quite a long head, so the straps sit seriously close to my ears, and it's just not comfortable. For a helmet of this price, this is quite an oversight. However, I'm told that the next production batch will see longer chin straps for size L helmets. 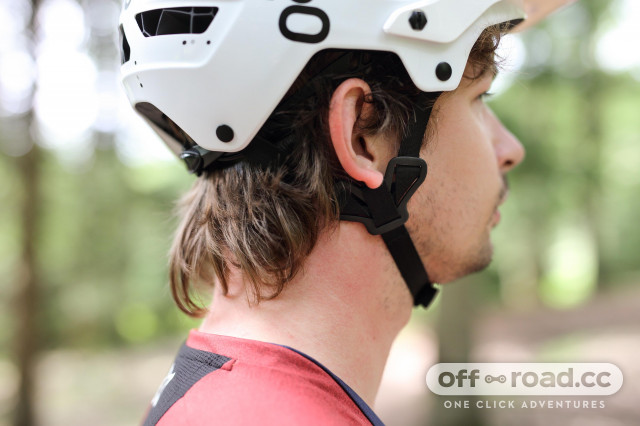 That leads me nicely on to the buckle and, as I've mentioned before, 720 has opted for one of Fidlock's new HOOK models, which can be tightened and loosened with one hand.

In practice, it's not exactly the most confidence-inspiring choice. You can pull and push it into and away from itself, and it'll happily stay put, but if you gave it a twist, it'll easily open and come undone. This isn't to say the buckle is bad, but I would feel a lot more confident using Fidlock's proven SNAP buckle, which you'll find on many other MTB lids. I believe it's a much more secure model.

As for airflow, the Awake 1.0 is pretty respectable at full chat, but at slower speeds, the HexaGo acts rather similarly to Koroyd. It blocks some airflow, especially through the vents at the top and sides of the helmet, but unlike more conventional helmets, the air isn't channelled around the head, and the vents aren't wholly open. Plus, the core's thin plastic shell struggles to let warm, sweaty man-exhaust out through the masses of actually-quite-small vents. 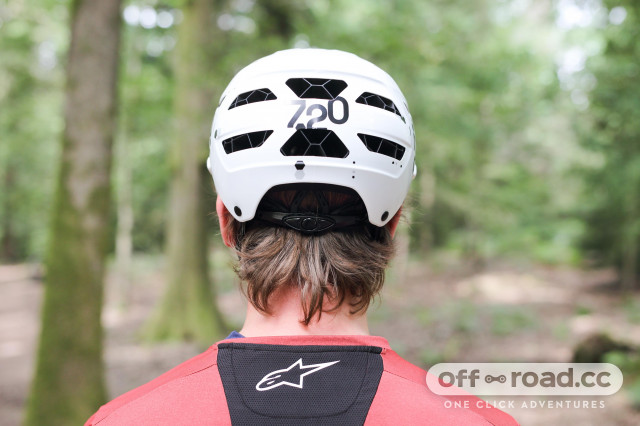 Speaking of that thin plastic shell, it overhangs the core, and rightly so, but it's surprisingly sharp around the edges. It's something I definitely wouldn't want digging into the side of my head during rotational impacts. That's similar to the HexaGo core itself: there's not an awful lot of give if you push on the core vertically, and the edges of the material are rather sharp. HexaGo's lack of movement in that direction raised some questions about what the hard core could do to a scalp upon impact.

I asked 720 Protections about this. As you could probably tell, I was definitely worried about how HexaGo could cut into the skin, but I was quickly reminded by the brand that HexaGo is rubber and while it seems hard, under impact it will compress.

Patrick from 720 also explained that several customers, including himself, have crashed in the Awake 1.0, and he showed me a video of his injuries after what looked to be a very nasty OTB, when he landed on his head then on to his shoulder. While Patrick's shoulder looked pretty beaten up, he told me that he suffered no blackout or dizziness. I must admit, after seeing that and hearing Patrick's story, I feel a lot more confident about HexaGo's ability. 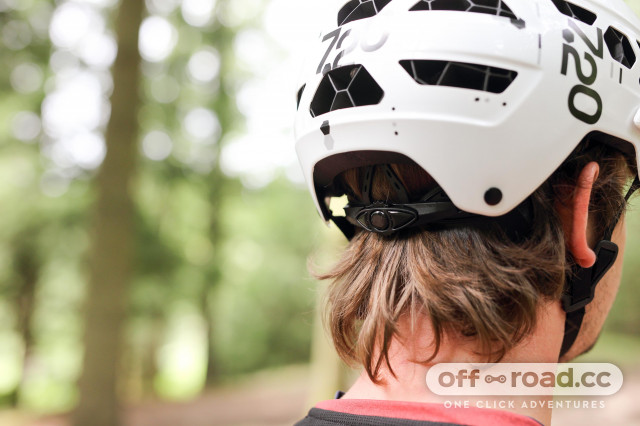 At £170 (although the price strangely differs between gloss and matt finishes – matt is £19 more), the Awake 1.0 comes up against some strong competition, all of which come built with MIPS or another kind of rotational impact system. Most of them are also noticeably lighter and definitely more comfortable. A great example, and one I've mentioned before, is the Lazer Jackal.

The Jackal is priced at £150, with MIPS and a FidLock SNAP buckle. It's still substantially weighty for a helmet made with conventional means at 396g, but it's a hell of a lot more comfortable and breathable.

Towards the pricier end of the scale is the excellent Troy Lee Designs A3 at £200. Again, it's kitted with MIPS and a FidLock SNAP buckle, but it's one of the most comfortable trail lids on the market. Like the Jackal, it also comes with a host of features that make it easy to live and ride with.

However, neither of these examples may offer the same level of safety as the Awake 1.0.

It's a seriously positive thing to see brands pushing the boundaries in order to keep us riders even safer than ever before. However, the safest helmet you can buy is the one that's the most comfortable and that you want to wear the most. Unfortunately, that can't be said for the 720 Awake 1.0 as it feels very much like a prototype. It could well be the safest helmet in the world but it's not comfortable enough to tempt me to reach for it before a ride. However, I am very much looking forward to seeing how this tech can be refined.