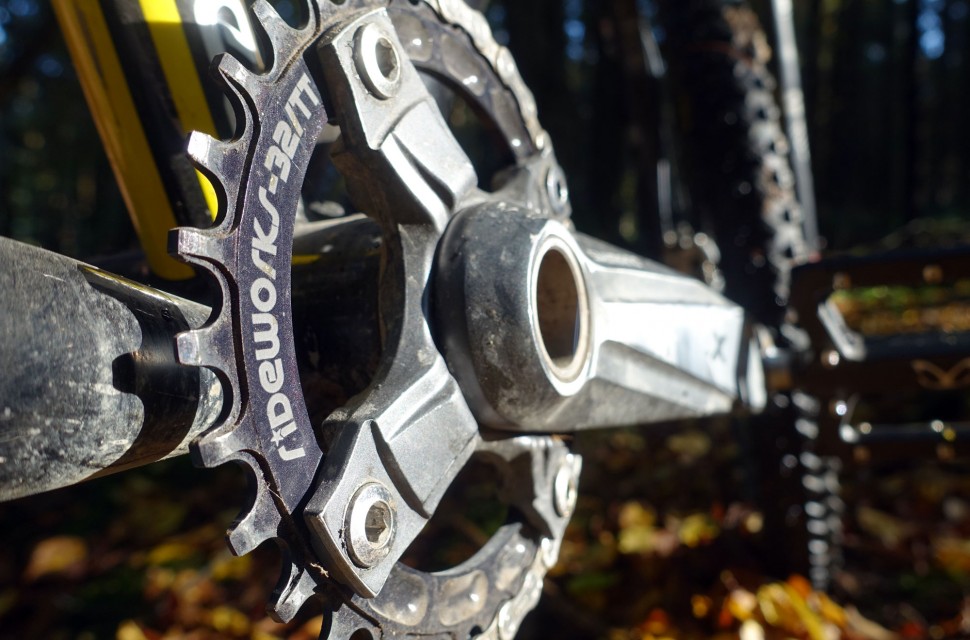 As a relative newcomer to the crowded chainring market, Rideworks deliver a no-nonsense, well made and finished chainring. I had zero issues in use across mud, dust and everything in between. The life of the chainring has been as good as leading brands, and it offers a solid UK made option.

Built out of 7075 aluminium and CNC machined to shape, it's also hard anodised so that maintains its good looks and helps prolong the life of the chain ring. It has some nicely scalloped machining on the ring to shed some weight, and the Narrow Wide pattern works as expected - I haven’t managed to drop the chain at any point. The fit is close with the the chain, and the tooth profile is well shaped and simple.

Fitted in the early part of the spring, it suffered the late winter sludge and a rather lazy cleaning routine, and kept looking like new - and has continued to look good all summer and into autumn. There is negligible wear too, with the anodising has just started to wear at points. Rideworks claim 10 times the wear resistance of similar chainrings and to be fair it has kept in really good condition. 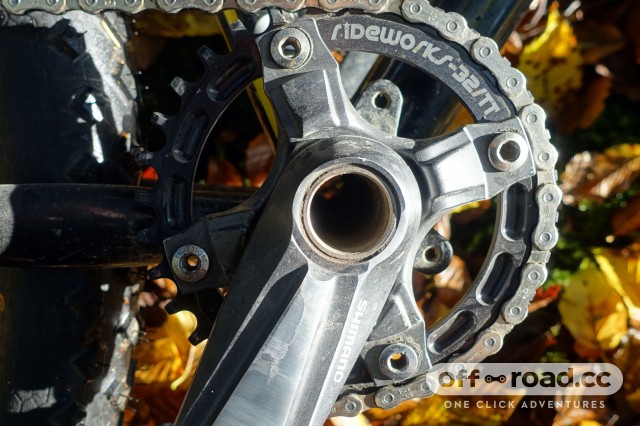 Its robust nature has meant its been quite happy being slide over logs, and taking some boulder clips and general abuse - it’s still running true, despite my best efforts to do some damage. When pedalling hard, there was not any noticeable flex either.

There is not much to expand on with the chainring - it works, doesn’t wear very quick and is available in 94, 96 and 104 bolt circle diameters, and tested in 32T with 32, 34 and 36 available - an option of 30 would be pretty handy as well. Colour wise there are Black, Red, Green and Blue options. Its a really viable alternative to all the larger producers and made in the UK to boot.

I also tested the single speed chainring over the same period and that has handled all that I have put it through - it's straight and tough at 3mm wide, and does exactly what you need it to. And priced at £33 its well worth a look if you run one gear. It won’t take a geared chain, so can’t be used as a cheaper chainring, and it has deeper, but non-narrow-wide teeth to seat the chain better. 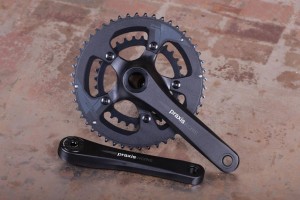 On par with other manufacturers and great quality.

It was a great fit and forget piece of kit

I would - well made and works great

As a pretty much essential piece of hardware, the Rideworks performs as well as all other quality chainrings - and with the durability of the anodising, adds another level of performance.

seems like a reasonable review, however as you mentioned there are a lot of chainrings out there already, why not mention how they compare to existing ones?