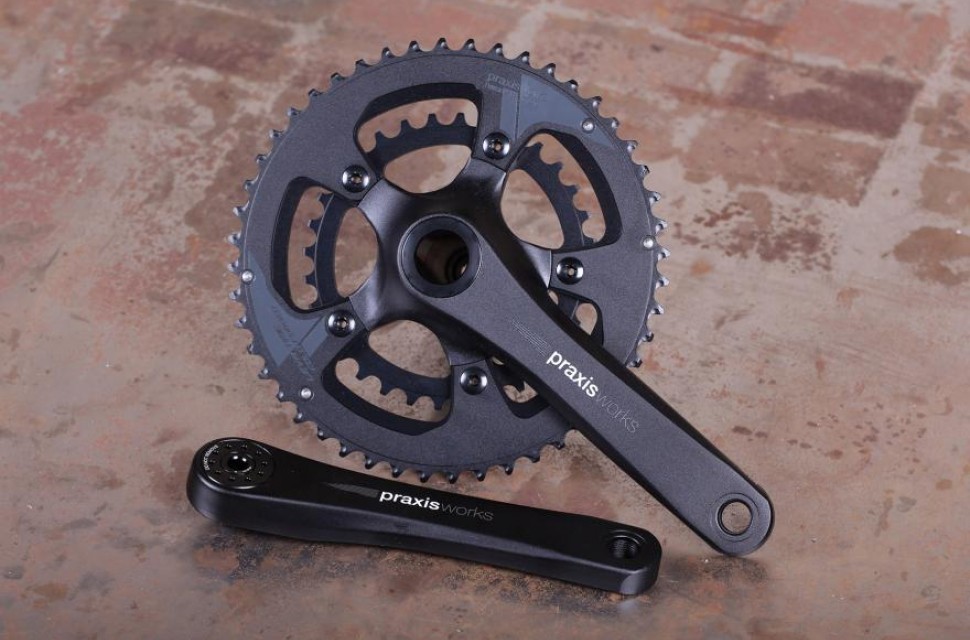 John Stevenson
|
May 19 2017
|
Overall
Quality
Performance
Value
What's good?
What's not?
Buy if...
You want lower gears than your gravel or adventure bike came with

The Praxis Works Alba M30 48/32 is a cleverly-designed chainset that drops your gear range a little with no discernible difference in weight, stiffness or shifting quality compared to the benchmark Shimano chainset you probably already have.

For a bit more than a decade, compact chainsets with 50- and 34-tooth chainrings have been standard issue for a cyclists who don't race. You find them on endurance/sportive bikes, gravel bikes, hybrids and flat-bar road bikes, and even some cyclo-cross bikes.

But some chainset manufacturers would like you to consider an alternative: the sub-compact, with 48- and 32-tooth chainrings or smaller. Our sister site, road.cc explored the idea in a bit of detail in [url='http://road.cc/content/tech-news/215679-first-look-does-praxis-works-alba-4832-herald-era-sub-compact-chainset']this first look at the Praxis Works Alba[/url] and from the comments there it's an idea many of riders welcome. 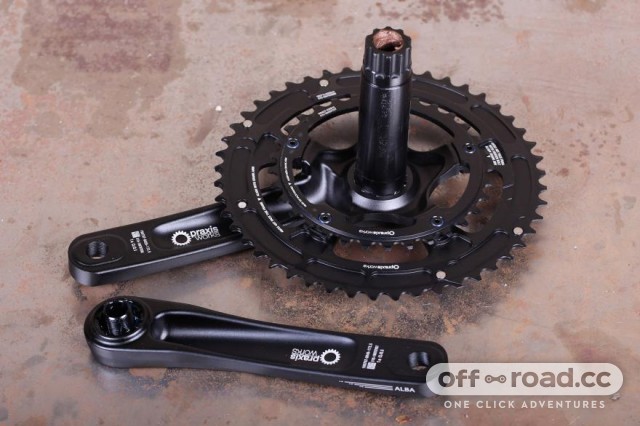 What we have here, then, is a fairly conventional pair of cranks, with a five-arm spider and 110mm bolt circle diameter (the same as a compact) cunningly tweaked so that a 32-tooth inner ring will fit. To achieve that, Praxis Works screws the chainring bolts straight into the inner ring, dispensing with the usual nut, and machines a cutaway in the crank spider arms so there's room for the chain.

The right hand crank is permanently mounted to a 30mm hollow aluminium axle, and the whole lot spins on Praxis' own bottom bracket bearings which you'll need to buy along with the cranks. They're £34.99.

Read more: Which chainset is right for you?

Replacing my previous Shimano chainset with the Praxis Works unit was straightforward; the instructions are clear and easy to follow. You'll need the Praxis tools to fit the bottom bracket, but they're only £15, so if you're a competent home mechanic that's probably cheaper than paying a shop to do it.

I found the Praxis chainrings sat slightly closer to the frame than the Shimano rings they replaced, so as well as moving the front derailleur down and taking up the resulting excess cable, I had to slightly tweak the stop screws or the chain would come off the inner ring when downshifting. 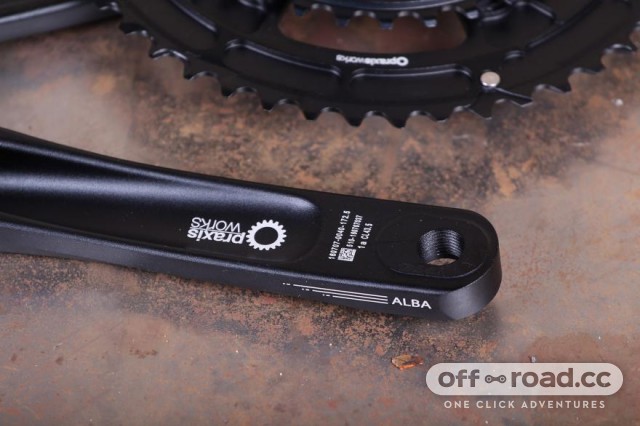 It doesn't make any difference to shifting, but the rear of my front mech is now a significant distance from the outer chainring. When compact cranks first appeared FSA offered a front mech that better followed the shape of a 50-tooth ring, but it didn't really take off because Shimano tweaked the shape of its standard front mechs to work fine with compacts. If sub-compacts become popular I can see specific front mechs becoming a thing again.

One problem I can foresee is that the front mech mount on some frames won't be low enough to accommodate a sub-compact. You need to be able to lower your front mech about 8mm to go from a 50- to a 48-tooth outer ring. On at least one of my bikes, that's not possible. This isn't an issue if your front mech clamps round the seat tube, but if you have a mount that's brazed, welded or bolted directly to the seat tube, check how much leeway you have. 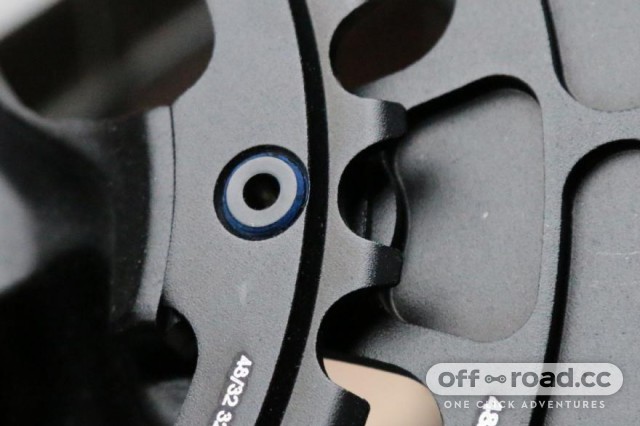 You press the left hand levers, and shifting happens, exactly as it did with a Shimano chainset. That's no small feat. Shimano is very, very good at the precise design of pins and pick-up teeth necessary for quick shifts under load. Praxis Works rings have a very similar-looking arrangement and they're cold forged from 7075 aluminium, a material choice that bodes well for durability.

If you can detect a two-tooth difference in chainring sizes while Just Riding Along, then you're a far more finely-honed measuring instrument than me. However, I think I spent more time in the big ring than usual with the Alba cranks, though that could just be confirmation bias. Or it could be the hours I've logged on Zwift in the last couple of months. 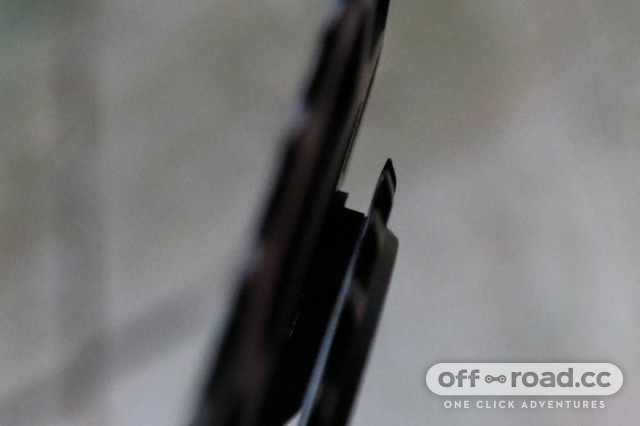 I certainly didn't miss having a 50-tooth big ring, even on a bike that has a 12-tooth smallest sprocket. I like to go downhill fast, but that's best achieved by getting into a very deep tuck, with chin almost on the stem, bum off the back of the saddle, hands tight against the sides of the stem. Coasting in a very deep tuck an 80kg rider can theoretically hit over 110km/h down a 16% hill. Adding 250 watts of pedal power would add about 3km/h, but moving to the drops so you can control the bike knocks that back down to just over 100km/h. ([url=http://bikecalculator.com/about.html]Curt Austin's Bike Calculator[/url] is a fun toy for modelling these things. I've assumed an aerobar is equivalent to a deep tuck.)

In use, then, the Praxis Works Alba M30 48/32 is just like a compact chainset, but with slightly lower gears. I like it a lot.

In combination with an 11-32 11-speed cassette or '' even better '' a Tiagra 11-34 10-speed, the Alba is also a great chainset for gravel bikes, which can really benefit from having a lower bottom gear.

On a wider note for those that ride on the road  the Praxis Works Alba M30 48/32 cranks deliver a handy reduction in gearing that brings a typical road bike transmission more in line with what many riders actually need, rather than what we imagine we can use. It's a better choice than a 50/34 compact unless you're fit enough to hammer a 50/11 gear.

All that said I wouldn't rush out and replace an existing compact with a sub-compact like the Alba M30 48/32. But if you're buying a new bike, a sub-compact is definitely a spec item you should consider.

However, you may feel that for a sub-compact, the Alba isn't sub enough. Other chainset makers offer 46/30 and even 44/28 sub-compacts. Praxis Works has been very clever in getting a 32-tooth ring to fit a 110mm bolt circle, but there's no way to go any lower. FSA's Adventure and Sugino's OX cranksets get round the problem by having a smaller bolt circle for both rings, or a diddy one just for the inner.

But if a 48/32 chainring combination is exactly what you want, then the Praxis Works Alba M30 48/32 is an excellent choice. 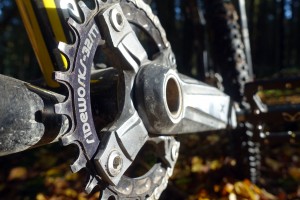 It's a chainset. It's for, er, people who need a new chainset. Facetiousness aside, what we're focussing on here is the chainring sizes, 48- and 32-teeth instead of the usual compact 50/34 combo. The idea is that this gives you slightly lower gears for those long, steep climbs. Praxis calls this Micro Compact. We generally refer to this class of chainset as sub-compact. That aspect aside, Praxis has this to say about the Alba crank in general: "Every weekend deep in the hills of Santa Cruz, cyclists are brought to their knees by a nasty, four mile, 1800 ft. climb named Alba road. This respected climb was the inspiration for our brand new Alba road crank. With its shapely forged alloy arms connected to our M30 BB and spindle system, the Alba is ready for anything you pedal up against."

Shifting is smooth and quick. Having a slightly lower gear range is nice when you hit a hill at the end of a ride, and I didn't miss the top end of a 50-tooth ring. Too early to tell, but the materials used and design details suggest it'll be reasonable to expect a long life. What kills chainrings is chain wear anyway. Look after your chain (clean it completely before lubing it, replace it before it gets too worn) and your chainrings last ages

A pair of Shimano 105 cranks weighs 737g and has an RRP of £150, so the Alba M30 is well in the ballpark. Anyone who thinks they can pick up a 12g difference in the weight of their cranks should report to the nearest mattress factory for duty as a pea detector.

The looks, the shift quality, the slight gear reduction.

Yes, if I were building a new bike.

I really like the Praxis Alba M30 48/32 cranks. They do everything a crankset at this price level should do, and provide a small but handy reduction in overall gearing too. That said, they're decent but not extraordinary value compared to, say, Shimano 105 cranks, especially given how heavily Shimano components are usually discounted, and they don't do anything unusual or special, aside from the facility to fit small rings. They'd be a solid 7/10 without that feature, but it lifts them to 8/10.