Skip to main content
Log In Register
Specialized Epic Expert Carbon Evo 2020 review £5,249.00
Great fun and highly capable for riders who want to go fast and far, but the suspension and shape won't be to all tastes 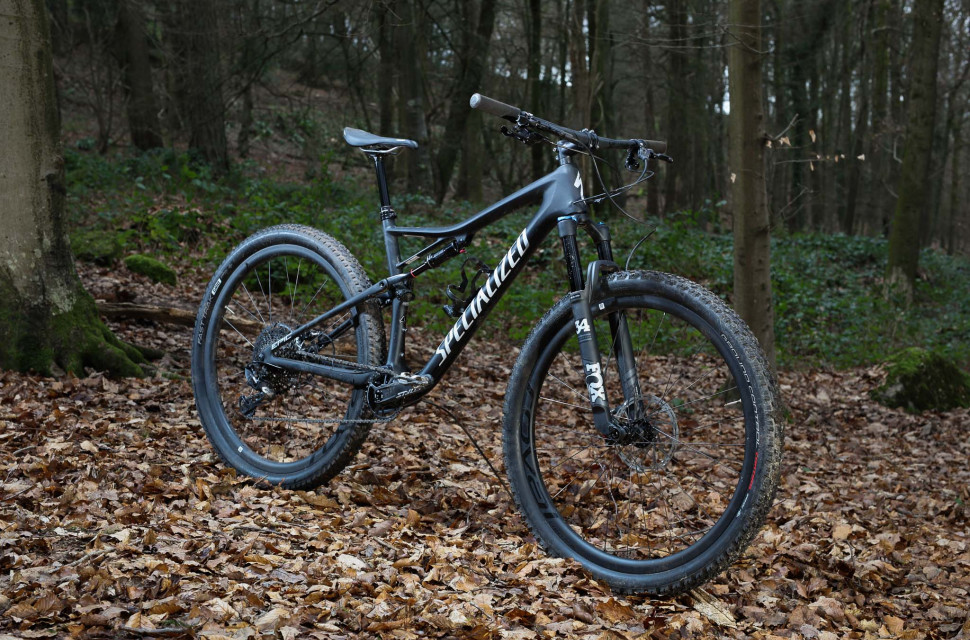 Jon Woodhouse
|
Apr 30 2020
|
Overall
Quality
Performance
Value
What's good?
What's not?
Buy if...
Your vision of trail riding is all about maximum distance at maximum attack

Specialized's Epic Expert Carbon Evo is a satisfyingly fun and fast take on a less pointy kind of cross-country distance machine, but the Brain-equipped rear suspension can feel more idiot than intellectual and the spec is rather pedestrian for the cash. If you can get over that then it provides plenty of high tempo fun for those seeking distance and thrills.

The Epic is Specialized's cross-country race full-suspension machine, sporting the de-rigeur 100mm of travel and 29" wheels,  but amongst the lineup are selected 'Evo' models that, while not fully beefed up on steroids, have definitely been heading to the gym. All the models in the range share the same carbon frame - save for high-modulus S-Works bikes - and an innovative system called the 'Brain' that automatically adjusts the rear suspension for maximum efficiency.

If the regular Epic is for the race-heads, the Epic Evo is for those that still want to go fast and breathe hard, but maybe have a bit more Type One fun while doing it. That means this bike gets a fork with 20mm more travel and a stiffer, larger diameter chassis, a 70mm rather than 80mm stem plus a dropper seatpost and more aggressively treaded front tyre. It's all designed to allow you to maximise downhill confidence without losing sight of the machine's basic purpose to smash up, along and over stuff as fast as possible. 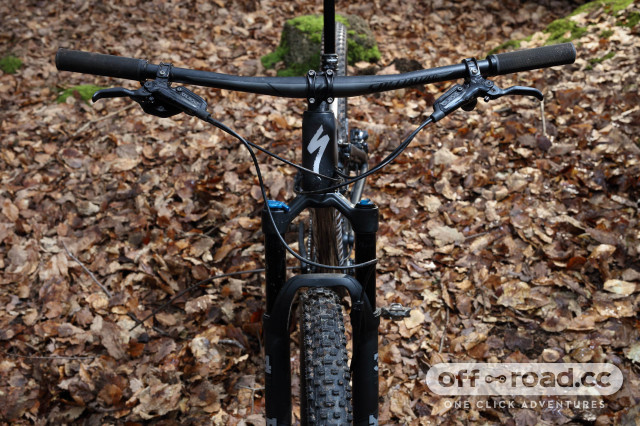 That said, there are some side effects. The Evo and standard Epic use exactly the same frame, so sticking a longer fork up front slackens out the head angle about a degree. That's great for making the front end a little calmer, though having a higher bottom bracket and degree slacker seat angle are the less welcome side effects of choppering the bike out. The former isn't so noticeable, but the latter definitely is on steep, seated climbs where you need to really fold yourself double to try and keep the front end weighted and going where you want it. 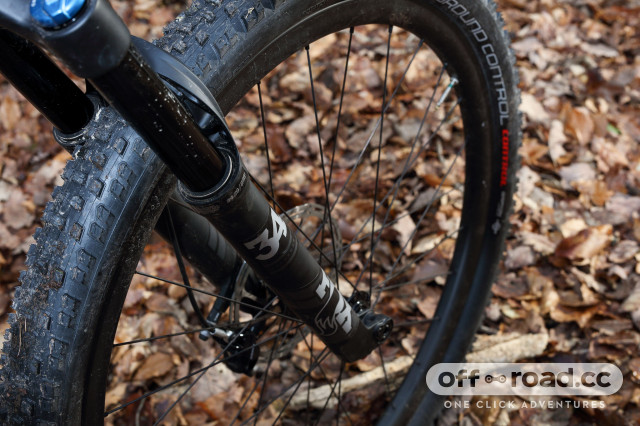 Still, once you've got to the top - and that usually doesn't take long, thanks to a decently low weight of 12.5kg (large, with tubes) and fast-rolling rubber - the Evo is an awful lot of fun on descents. While it's slacker than the standard bike, it's not exactly a trail chopper at 68.5° at the front, but the beefed-up chassis of the 120mm Fox 34 StepCast fork does allow more aggression in your line choice changes and the damper deals with repeated bumps impressively.

Less conducive to getting yourself pointed in the right direction is the rather flexy Roval Control Carbon wheelset. The inherent stiffness of the deep-section carbon fibre rims is undermined by having just 28 spokes at both front and rear, so there's a fair bit of twang to them, which doesn't help when you want to wrestle them from one line to another. 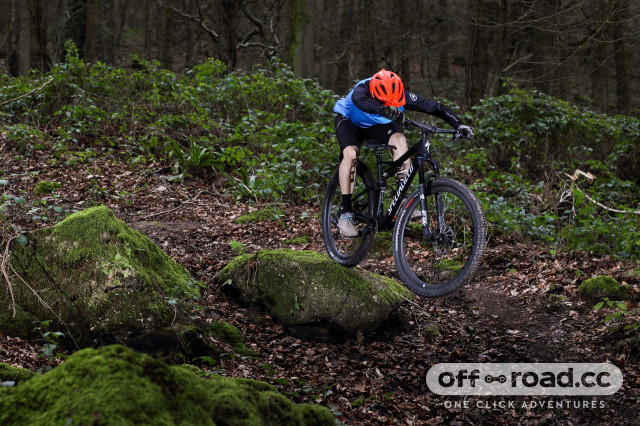 The rear freehub on the DT Swiss 370 also started making some unhappy noises under power from time to time too. A quick stripdown showed nothing obviously wrong, but this model uses a traditional spring-loaded three-pawl design rather than the more secure star ratchet system seen on the brand's higher-end hubs.

The Specialized Ground Control tyre fitted to the front definitely adds more bite than the Fast Track rubber that's fitted to both ends on the normal Epic, but anything more than the slightest smear of mud is still enough to get things very drifty indeed. You'll probably want something a bit more aggressive for wet weather duties, but lurid drifts - aided by the skimpy rear Fast Trak tyre, which does get the tougher Grid casing - are really part of this bike's appeal. 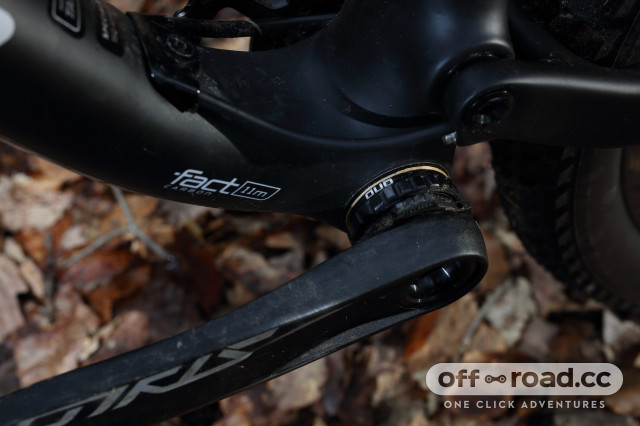 It feels all kinds of wrong to get caught up in some huge angle slides on what's essentially a mildly detuned cross-country race bike. Think taking the Pope to a drum and bass rave or doing lunchtime sambuca shots with the Queen - wrong but likely to be hilarious. The fact this bike feels barely any slower back up the hill than a 'normal' cross-country bike is a big part of the appeal too - you can cover a lot of ground at a high level of hoon on this thing. 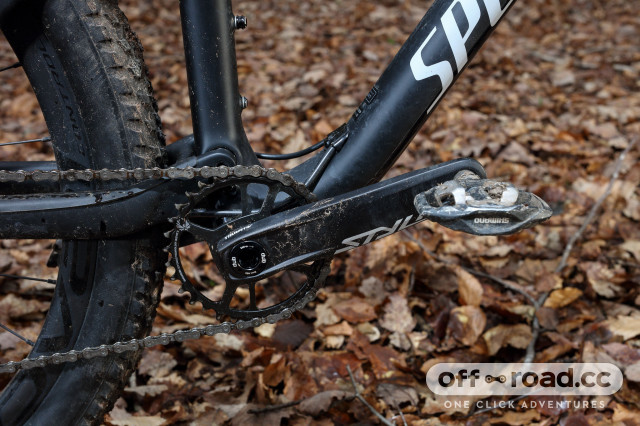 Okay, when things get seriously steep and technical you'll become aware that, while shorter than the standard bike, a 70mm stem is still pretty long and the 446mm reach on the large I rode is very far from a rangey feeling traditional trail bike, even most 120mm ones. Still, if kneepads are something you only use when doing DIY around the house or you just enjoying pushing your limits, it's plenty capable for most riding and will dispatch all but the gnarliest of trail centres with ease, but it's not a progressively shaped trail bike by any means. 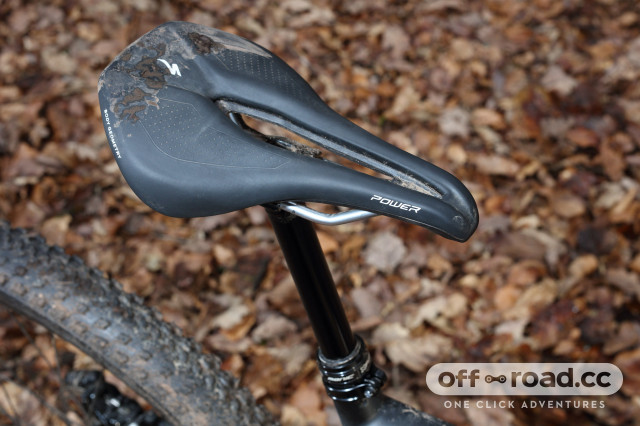 It was enough to get me wondering whether the standard Epic would be any faster - or indeed if there's much point in it, even for the most dedicated of race heads. Okay, the 125mm X-Fusion Manic dropper post might add a bit of weight, but it's worth all that and more to be able to get the stubby (and very good) Body Geometry Power Sport saddle out of the way instantly with Specialized's own sleek underbar remote. It's also rather cool that it comes with a bottle cage with SWAT multitool built-in as standard too.

A Brain that's not as smart as it thinks it is 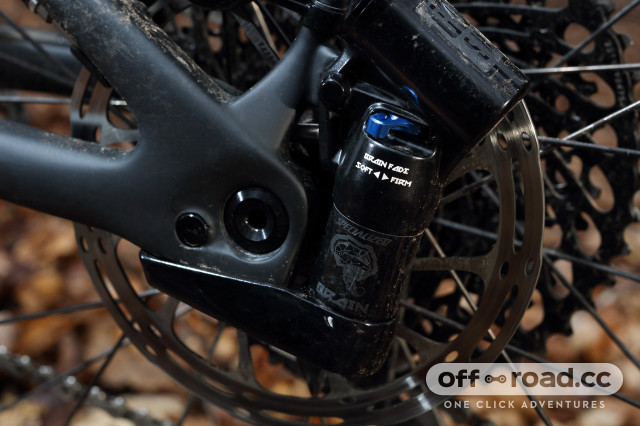 The Epic Expert Carbon Evo isn't without flaw though, with the 'Brain' suspension system sharing a bit part of the blame. The design, unique to Specialized, uses an inertia valve mounted near the rear axle to adapt the compression damping to what's going on at the wheel, independently of rider input. That means you can be stomping on the pedals like a maniac without affecting the suspension, which can only be freely accessed when a bump from the ground pops the valve and in turn opens up the custom RockShox shock. 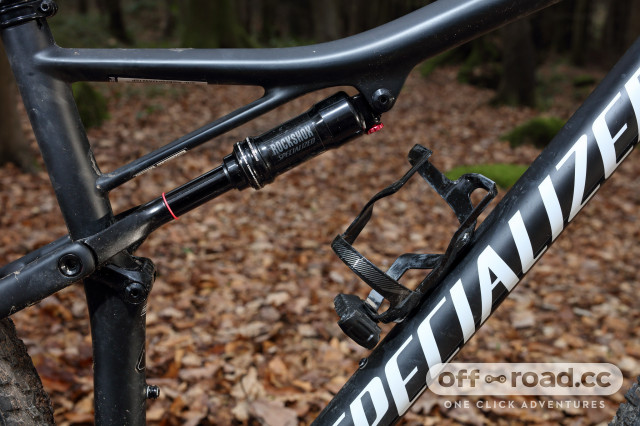 It works entirely as advertised, even if your pedalling has more in common with the haka than anything resembling a circle, so the bike feels hardtail-like in the response to power. It's also possible to tune how aggressively it responds to bumps too, but the downside is that, even in the most open setting, it still transmits a noticeable clunk when it's activated. Stick it in the firmer settings and the back end of the bike basically uses Braille to inform your arse when the valve is open. Subtle it is not. This is one of the rare occasions I'd rather have a more traditional remote lockout for one or both ends. 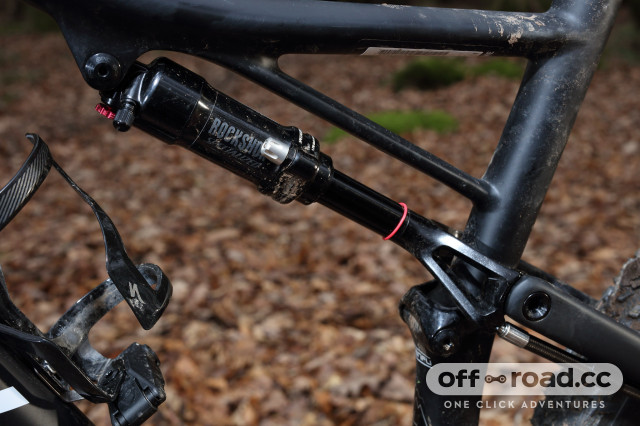 I can't say I'm a huge fan of the rear shock's Autosag feature either. This theoretically allows a streamlined and simplified suspension setup by pumping the main chamber of the shock to the maximum 300psi, then sitting on the bike and pressing a valve which then bleeds the shock to the right pressure. The only problem is that if you want to fine-tune pressures yourself then it's much more of a faff to play about with - though of course many people will be happy if they never have to do that, in which case it's dandy.

Apart from that, the basic setup of the back end is decent. It's the only full-suspension bike in Specialized's lineup that doesn't use the FSR four-bar system, that having been dropped over previous versions of the Epic for a single pivot design with a flex stay, all in the name of weight saving. It's not buttery plush but it does pedal very well. 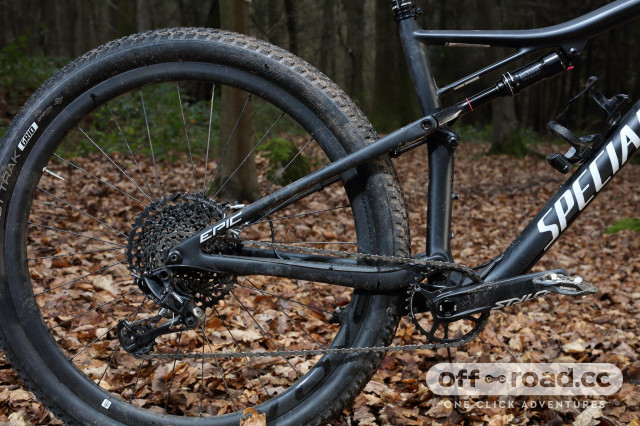 Talking of money, there are some areas of kit that feel a bit tight for the asking price, despite the carbon wheels and frame - I'm pretty sure the bar and stem are shared with other bikes in the brand's lineup that are a fifth of the price. Still, in overall terms, it compares respectably to other shop-bought bikes, especially those from boutique brands. Direct sales brands are, obviously, a different matter and you'll get a lot money shiny kit for this money there. 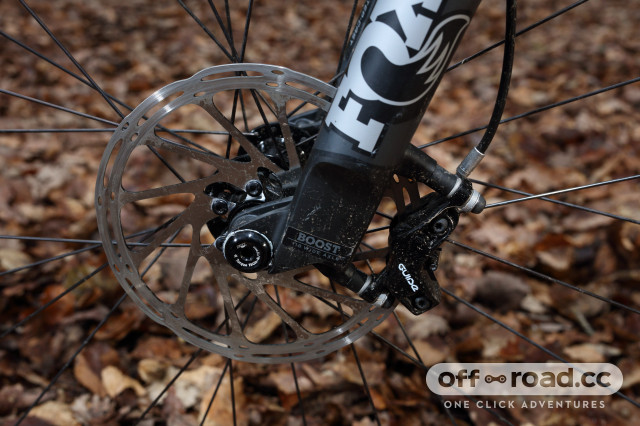 Apart from shaving a few grammes here and there, that's not a massive issue in the real world. The 12-speed SRAM GX Eagle drivetrain works very well indeed and shifts crispy with plenty of range. It's also nice to see a conventional threaded bottom bracket too. The four-piston SRAM Guide RS brakes provide a welcome bump in braking power, with a consistent feel and easily managed power.

While 'gnarly cross-country'  might be a niche within a niche, there are plenty of bikes that are stepping up to fill it. Mondraker's F-Podium marries a lightweight carbon frame with the very active Zero suspension system and Forward Geometry used on its other bikes to deliver a bike that's extremely capable both up and downhill, with much more modern geometry and a similar level of value. Much like the Epic Evo, there are also F-Podium DC (Downcountry) models that boost fork travel and tweak spec to similar effect.

NS Bike's Synonym is another progressively shaped, short travel carbon bike that offers a choice between race and trail focused builds. With a long reach, steep seat angle and slack head angle, both are more aggressively pitched than the Epic Evo, but the Synonym TR (Trail) also boosts rear as well as front wheel travel to 120mm.

Santa Cruz's Tallboy is a bit more of an outright short-travel trail bike, but still aims to provide fast'n'far thrills with 130mm at the front and 120mm at the back, big wheels and progressive geometry.

Moving to direct sales fare and YT's new Izzo offers stonking value and a trail focused geometry, while traditional cross-country types will be pleased with the excellent value but conservatively shaped Canyon Lux, which also sports a dropper post in most specs. 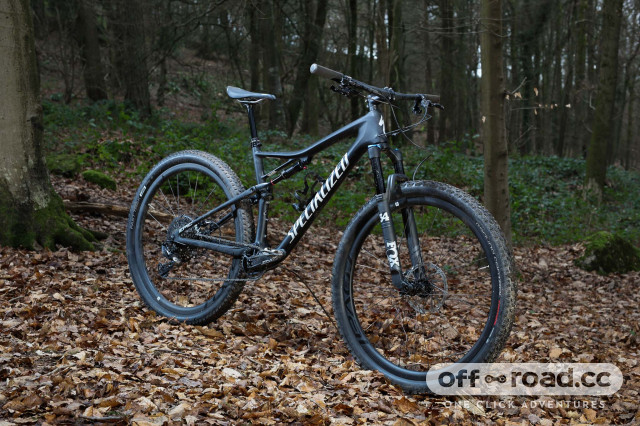 There's a lot to like about the Epic Evo. There's no getting around the fact that it's extremely rapid and efficient when it comes to climbing and that the Brain-equipped shock helps translate your effort into efficient forwards motion, but it sits in a rather strange hinterland between a full-on cross-country race bike and a short-travel trail machine.

If you're into hard-charging, high-speed riding where your heart rate never gets out of triple digits until you've had your post-ride recovery shake and downloaded and analysed your power data, then it's probably an ideal 'trail' machine - arguably one that makes much more sense than the regular Epic.

However, the fact that it's been modified from an already rather conservative geometry in the first place leaves it with some baggage in the form of the slack 73.5° seat angle that hampers climbing, while reach and head angle figures are still firmly in the cross-country camp. The Brain shock's often notchy interference mean that it's not as plush or planted as more trail focused and progressively shaped rivals either . While it might be neither full racer fish nor trail fowl, there's are a lot of riders that will know whether the Epic Evo is for them.