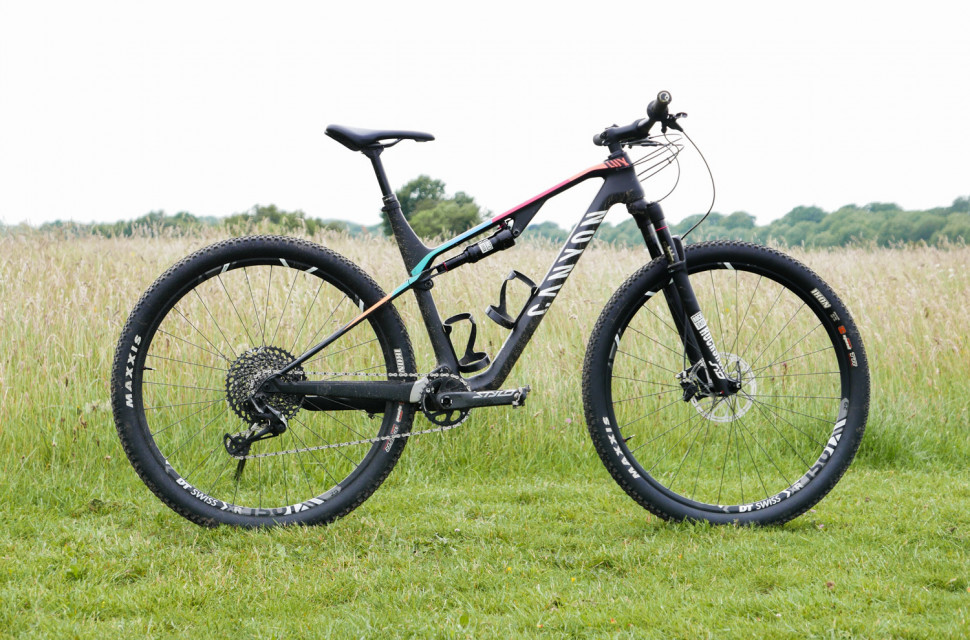 Jon Woodhouse
|
Jul 5 2019
|
Overall
Quality
Performance
Value
What's good?
What's not?
Buy if...
You want a rapid carbon racer and can live with - or change - the shifter

Canyon's Lux CF SL 8.0 Race is a super high value and blisteringly quick cross-country race bike that can also take some rapid trail riding in its stride. The suspension and geometry work well for the intended task but the Gripshifter is a very odd component choice that undermines control and needs changing.

As you'd expect from a modern cross-country bike, the Lux rolls on 29" wheels and the full carbon fibre frame has all the mod cons such as Boost hub spacing and flat mount brakes. Up front, there's 110mm of travel from a RockShox SID RLC fork paired to 100mm at the back from a linkage single pivot design that relies on flex in the stays rather than a pivot anywhere near the dropout. 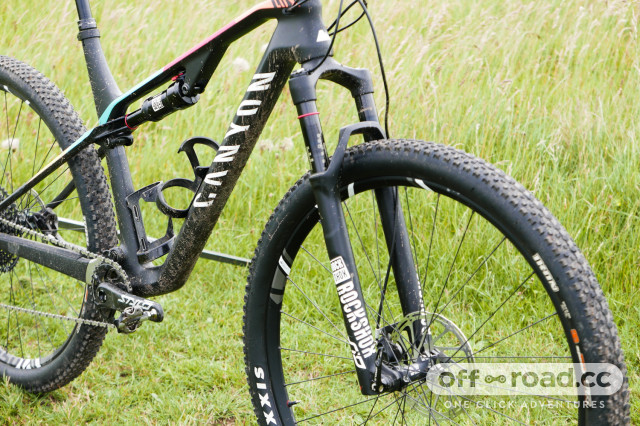 A big change over the old bike is that the shock is mounted to the top tube rather than the bottom bracket area. As well as allowing Canyon more freedom to tune the bike's suspension response, it means you can now get two 750ml water bottles inside the main triangle - the bike even comes with the cages fitted. 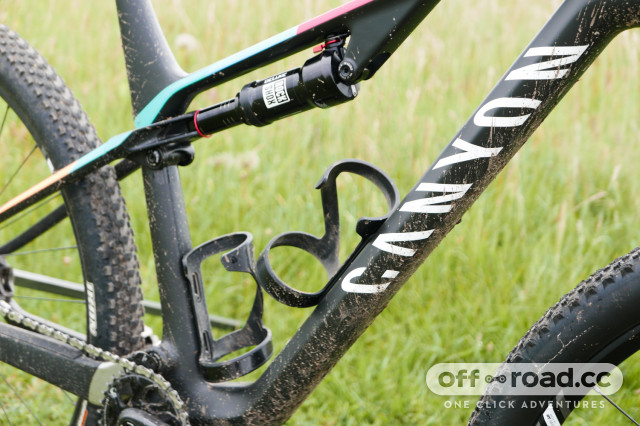 Both the front and rear shocks are linked by a cable operated and bar mounted remote that sits underneath the bar on the left-hand side, making it easy to lock the bike out for sprinting or big climbs. Interestingly enough, it's also joined by a remote for the KS LEV SI dropper post, which offers up 100mm of travel. 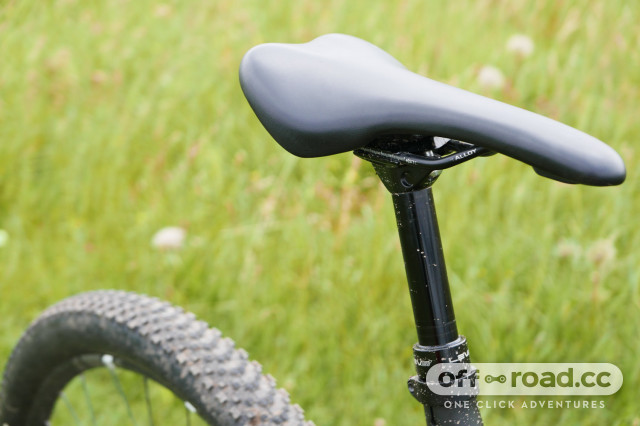 That might seem a bit odd in the weight-obsessed world of cross-country racing, but more and more top-level riders are using them and it makes a huge amount of sense for everyone else too, especially if you aspire to do more than maximum heart rate laps on the bike. The only real downside is that all the levers and cables lead to a rather cluttered and often unintuitive bar layout. 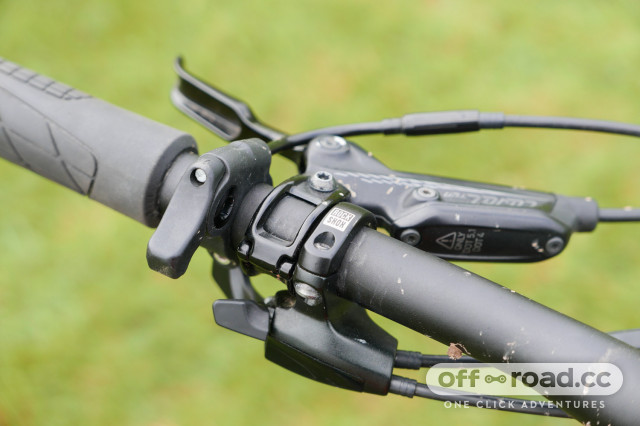 Capable of more than hot laps

The geometry and suspension are also aimed at being more capable than a pure racer, with a 69.5° head angle and 450mm reach for this large-sized bike being pretty progressive by the standards of the category - Mondraker's F-Podium firmly excluded, that is. That said, the 74° effective seat tube angle figure hides the fact that the actual seat angle is much slacker, which does offset weight rearwards on steep climbs, requiring you to actively get your weight forwards - or just get out of the saddle and sprint. 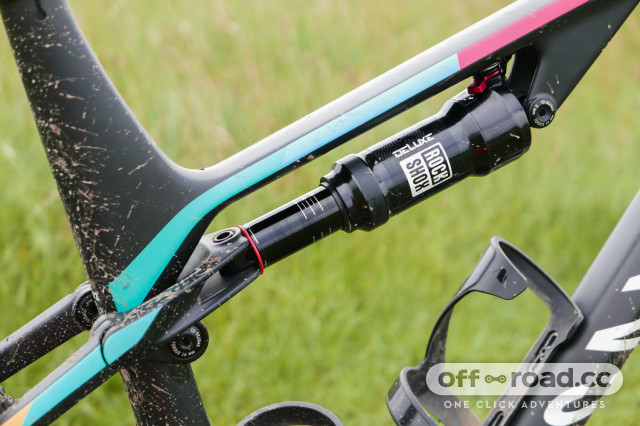 When you do start cranking up the pace, the Lux has a very well mannered back end that manages an impressive balancing act between minimising bob while still having traction over broken ground. It's also got a reasonable amount of progression, using full travel but bottoming out smoothly on drops; to be honest, if you need more support in hard-hitting situations then you should be looking at burlier bikes from the off. 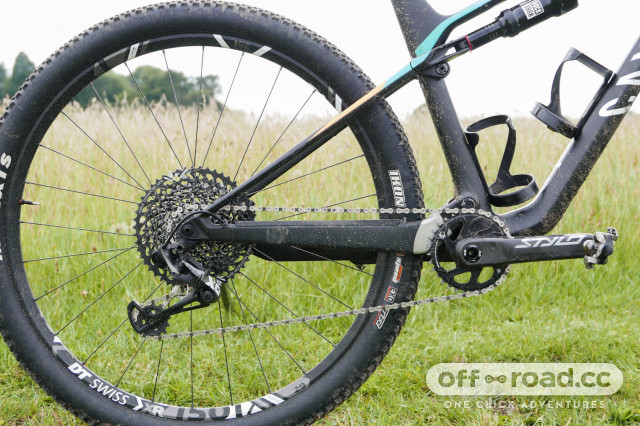 The 720mm wide own-brand flat bars and 80mm long stem still feel pretty narrow and tiller-like coming from a modern trail bike, but they're a half decent compromise between head-down racer aggression and a bit more trail riding ability and it's a huge amount of fun to zip between the trees and jink from one maximum speed corner and sprint to the next. 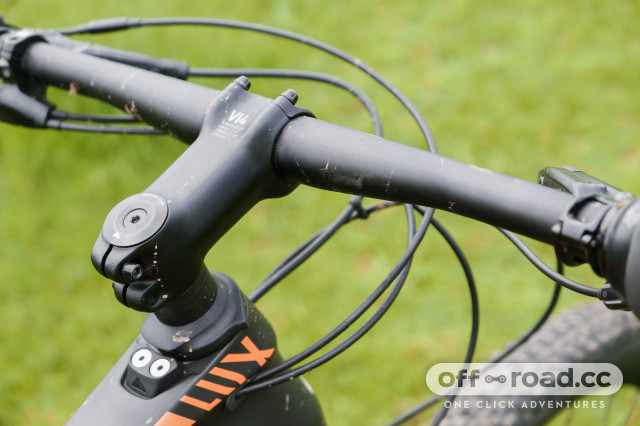 Even in the dry, it's fairly easy to find the limits of traction on the 2.3" Maxxis Ikon rubber, even in this triple compound format. If you intend to use the bike on more natural muddy terrain, you will need a more aggressive front tyre as a minimum, but on a dry trail centre ride, they're seriously rapid. 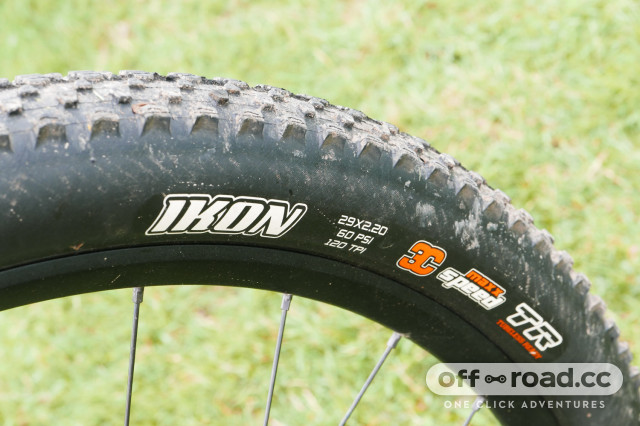 While we're on rolling stock, the DT Swiss XR1501 wheelset is superb, with a 25mm internal width that gives a good shape to the tyres and a quick freehub pickup and they've proven tough and long lasting in the past. 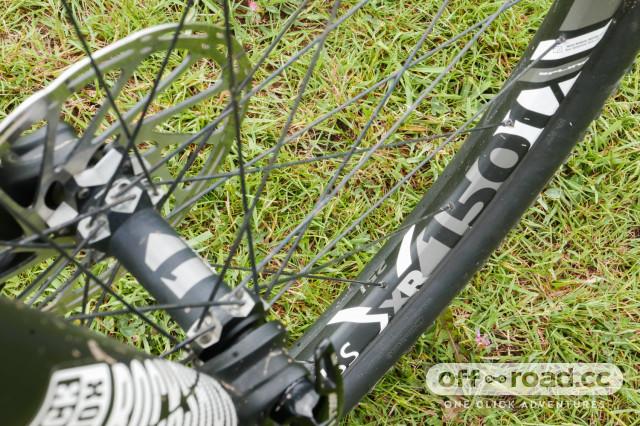 Up front, the SID fork does a very impressive job of maximising the control you get from just 110mm of travel. The Charger damper has to work overtime to keep up with the demands on the bike, but it more than delivers and it's not noticeably flexy for such a lightweight unit either. 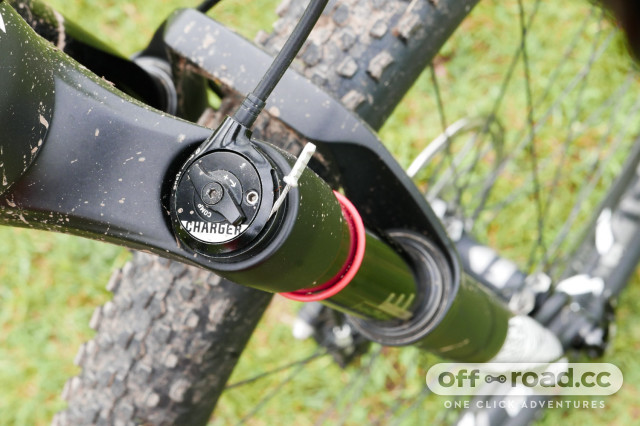 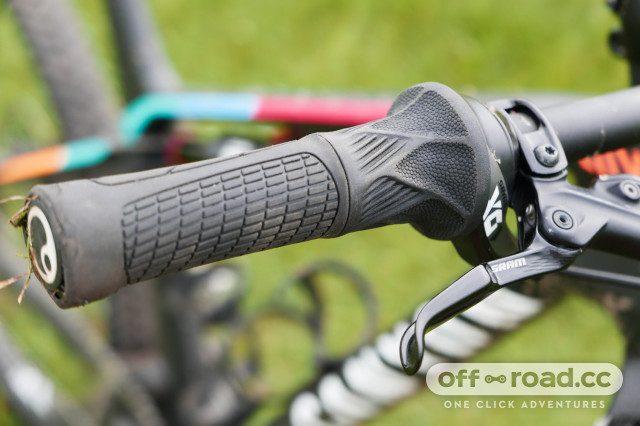 Less pleasing is the drivetrain setup - there's nothing wrong with SRAM's 12-speed X01 Eagle drivetrain, but I have no idea why Canyon chose to fit a Gripshift rather than a conventional trigger shifter.

Even when you've managed to get your head around which way you need to twist to get up or down the 10-50T block, it still requires you to move your hand position significantly, so braking and shifting more than a single gear is basically impossible while maintaining a good grip on the bar. It's an anachronism that is best left in the 1990s, with elastomer suspension, 22" bars and all sorts of other junk. 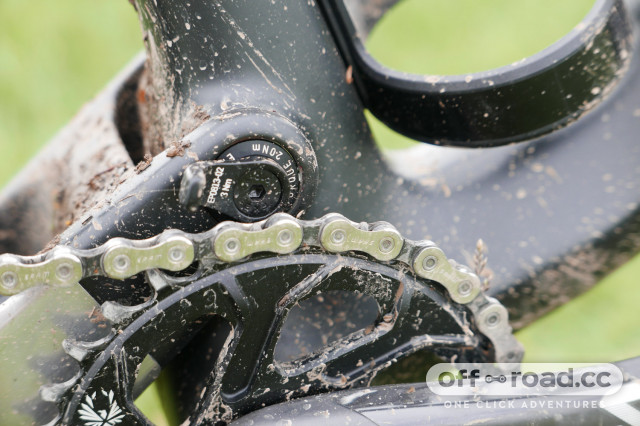 Still, assuming you're under no pressure to shift in a hurry on any sort of technical terrain then there's loads of gear range - the bike is now single ring specific, so that's just as well - and Canyon has even integrated a neat little chain guide into the main pivot. The Level TLM brakes have good feel and power for a cross-country stopper too.

Overall, the Lux CF SL 8.0 Race offers an awful lot of bike the money. At 11.4kg it's certainly light enough to race out of the box for most people and while the handling doesn't deliver any new-school radness, it's more than up to the task of going really bloody fast up and down hills, with composed suspension.

I'd heartily recommend it to anyone that's after a rapid racing bike that can also take on some high-velocity playing about on trails, save for the deal breaker that is the Gripshifter. Get shut of that - a cheap SRAM NX Eagle unit will do the job - and you've got yourself something that'll be able to get you on the podium on a weekend and absolutely destroy some trail centre laps when you're not putting a number plate on too.

I don't get the hate on gripshift, it's alot better than it used to be! The setup looks alot cleaner, it's easier to shift and u can shift alot more cogs at one time! Also NO there is no problem in braking while shifting!