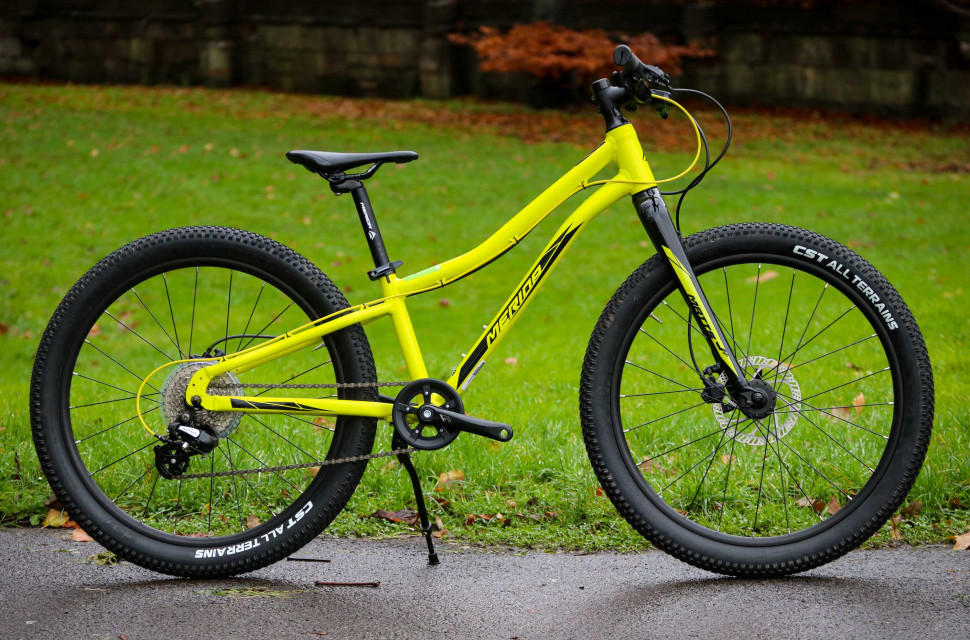 Stu Kerton
|
May 27 2020
|
Overall
Quality
Performance
Value
What's good?
What's not?
Buy if...
You want a robust and confidence-inspiring off-roader for your young ‘un

Merida’s MATTS J.24+ offers a very good frame and fork with sorted geometry that makes it fun and easy to ride – no matter what level of experience your child has. The Plus-size 2.4" tyres and good clearances mean a surefooted and comfy ride off-road, but while the lack of suspension and limited gears keeps things simple, the result is still a bit on the weighty side.

As any parent knows, no matter how good any bike looks your child needs to find it cool. The MATTS J.24+ certainly doesn’t fail that test. My daughter Libby absolutely loved the way it looks, commenting that the wide tyres and chunky black rims make it look like a proper mountain bike.

For reference, Libby’s main bike is an Islabikes Luath she runs in both road and cyclo-cross builds. Watching her take off on the Merida, it was clear it gave her immediate confidence, and she quickly adapted to the slacker geometry and wide handlebar. 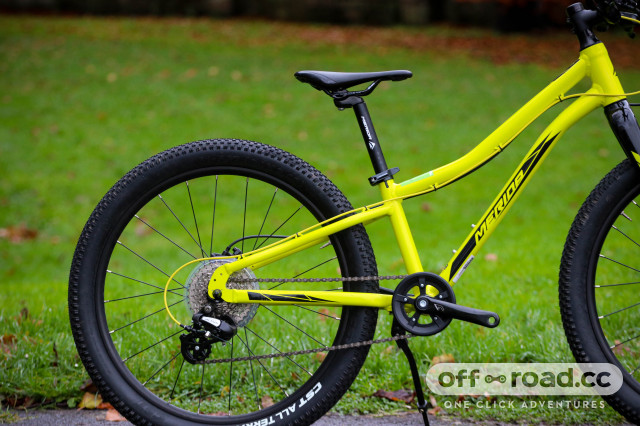 After a few laps of the estate to get everything dialled in, she was soon showboating and jumping off curbs – another good sign. Our nearby forest is full of trails that are ideal for kids, ranging from simple flowing singletrack to more technical downhill stuff, and the J.24+ spent a lot of time there during its six-week test period. It proved extremely adaptable. 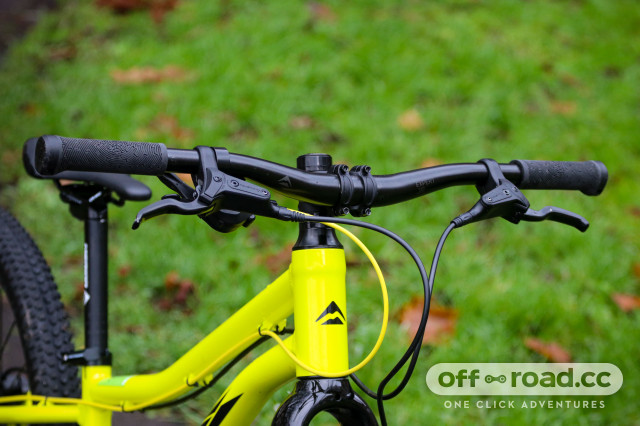 After a brief familiarisation period on the easy stuff, Libby hit the more technical trails on the MATTS J.24+ looking the most relaxed I have ever seen her off-road. 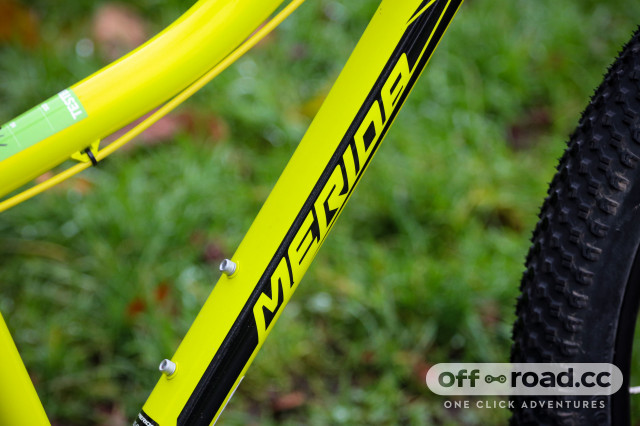 The slack geometry (68 degree head angle) allowed her to take the downhills at speed, thanks to handling she felt never got twitchy or that she even really had to think about. She could just let the bike go and deal with the trail itself.

The 620mm wide, 20mm rise Merida Expert Jr handlebar is another big part in creating that sense of security – it gives a solid, wide base for small torsos to lean into (side note: 15 years ago, 620mm bars were considered 'wide' for adult mountain bikes, and 68 degree head angles were for DH racing only. Make of that what you will.) 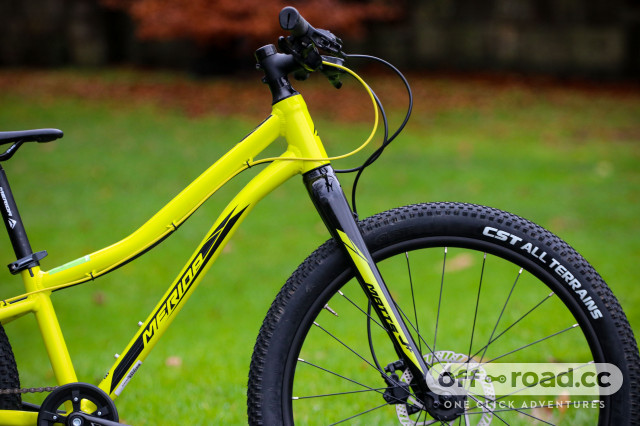 Libby was soon out of the saddle when descending (not something she normally does), allowing her knees and elbows to do the work of shock absorbers. Those chunky CST Jet C1820 1.95” tyres prove decent all-rounders, and once knocked down to a sensible pressure for her weight she was happy without any front suspension. 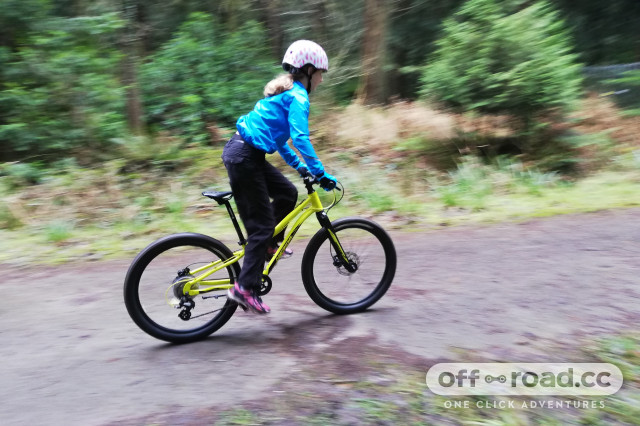 The other thing upping her confidence was knowing she could stop. The Tektro HD-M275 brakes can be set close to the bar for easy reach, and offer positive stopping power – especially once bedded in after a few wet rides. 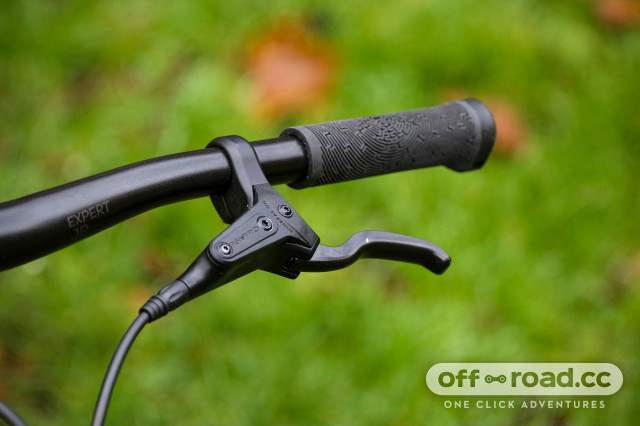 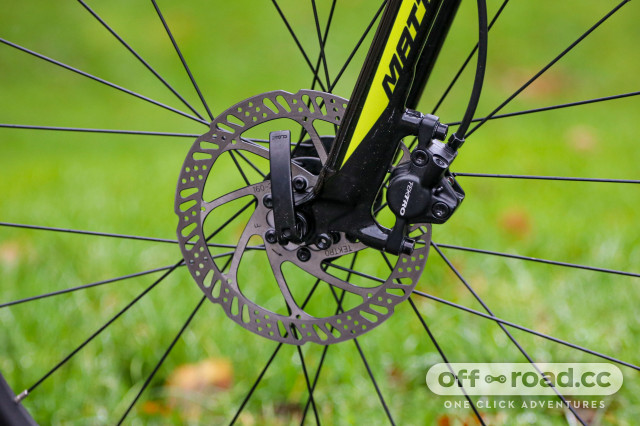 The low standover height of the frame is another bonus, as our test pilot found she could easily get a foot down even if the terrain was cambered away from her. Knowing she wasn't trapped on top if she had to stop suddenly only helped her confidence in the tricky sections. 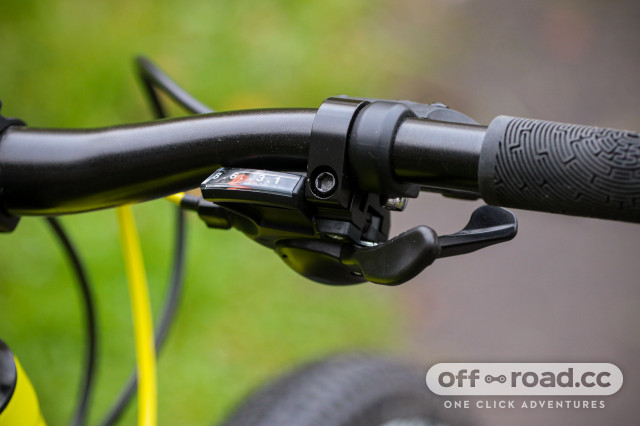 The gearing is a bit of a mish-mash of brands and components but, to be fair to the Merida, it all works. The MATTS J.24+ has just eight gears, which is a good thing as it's simple and relatively light. Young riders, unless they're racing competitively, tend to find a gear and stick with it, so multiple chainrings rarely get used. 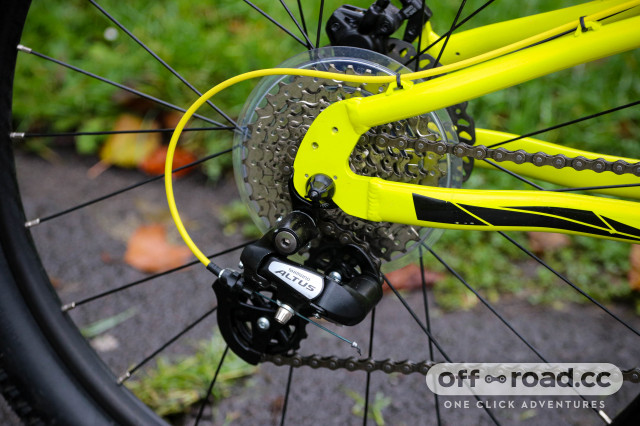 It's pleasing to see Merida spec a finger/thumb gear shifter – Shimano Altus – as these are easier for kids to use than twistgrips. While the latter might seem better, it seems the likes of Gripshift can actually be difficult for small hands to use on the fly. 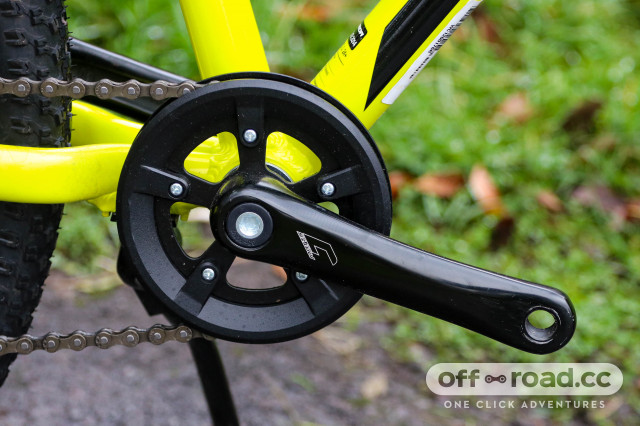 The MATTS joins a 28t chainring to an 11-34t Sun Race cassette. The result is a little bit gappy, but Lib found it covered most eventualities with only the steepest of climbs forcing her to get off. On fast gravel tracks or roads, the 11t sprocket puts out a decent speed too. 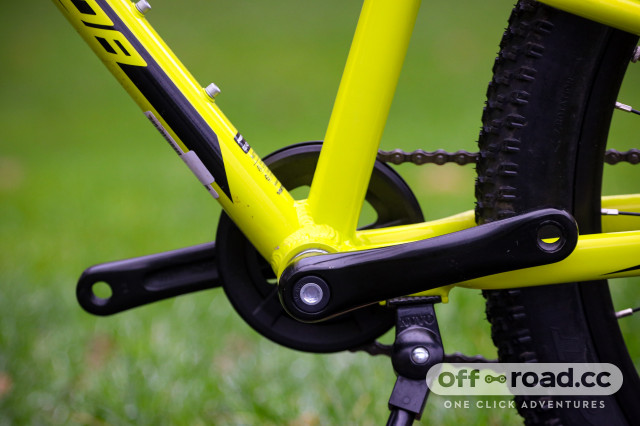 The Merida MATTS J.24+ weighs 10.6kg, so it's a bit on the chunky side for a small child, but to be fair to it’s only when you have to lift it up or push it uphill that you really notice. From the saddle, the MATTS J.24+ rides much lighter than you’d expect. 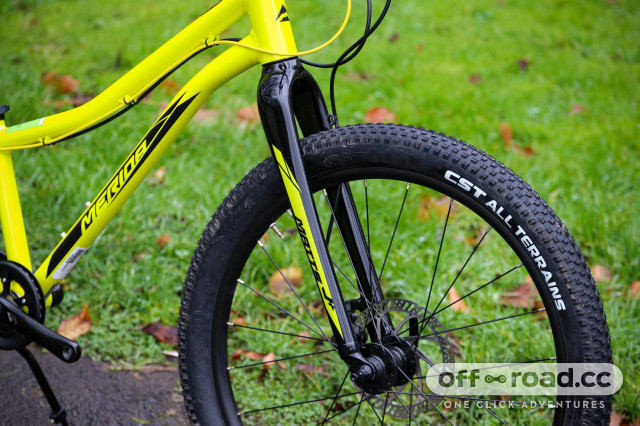 Merida's 24” alloy wheelset is tough, and we certainly had no issues with reliability or trueness despite really taking some whacks on fast descents. Those high-volume CST tyres cope well too, suffering no damage or punctures, and proving reasonable on most surfaces while working best on gravel and hard ground. 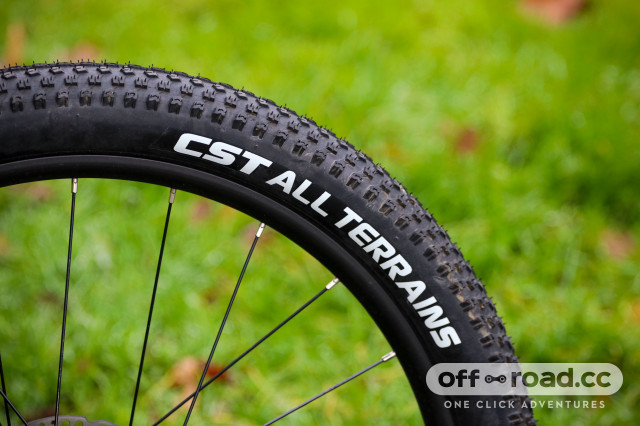 That shallow tread is easily overwhelmed on wet and muddy trails, but on days like that Lib felt the bike handled so well that it sliding wasn’t a problem. Following her on a muddy, puddle-strewn trail I was struck again how by how relaxed she was – she really looked like part of the bike.

Ultimately, the confidence a bike inspires is probably the best way of judging how good or bad a kids' bike is, and on these terms the J.24+ really scores high. 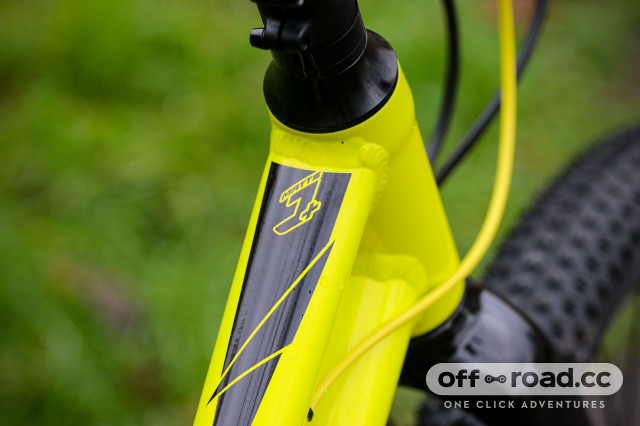 It's not exactly cheap, of course – £460 is quite an investment for a growing child – but you're getting what you're paying for and the value is good.

For starters the MATTS frame is 6061 aluminium alloy (instead of cheaper and heavier steel), and comes with bottle cage mounts, rack and mudguard mounts. It also has a kickstand. The fork is alloy too, while the rear mech hanger is replaceable should it bend or snap in a crash. 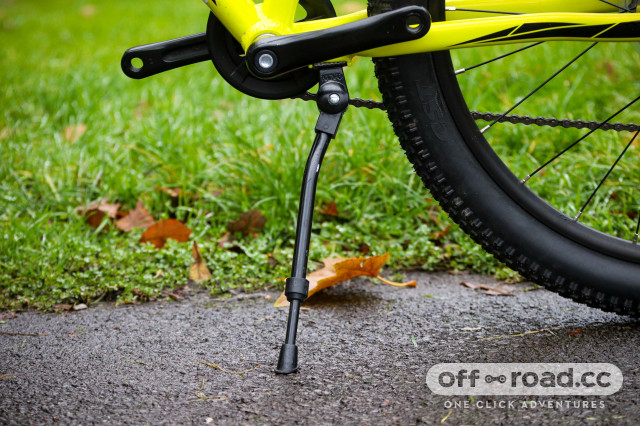 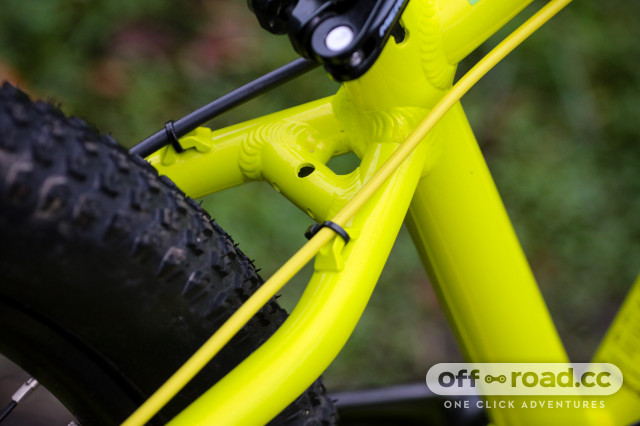 The frame is well made and well-finished, with a smooth paintjob under a deep clear coat that does a good job of minimising the inevitable scratches.

There's some tough opposition out there, however. Giant’s ARX 24 is £325 and over a kilo lighter, and while it’s less of an off-roader than the Merida and lacks disc brakes, it's a very good all-rounder. At the other end of the scale are the likes of Islabikes' Creig 24 at £900. True, it has top features such as hydraulic braking and front suspension, but mostly it highlights just how much the Merida achieves for basically half the price.

Overall, the Merida MATTS J.24+ is a very good bike for keen off-roaders, or eve for those who just want to get out and enjoy themselves on all kinds of surfaces. The geometry really flatters the rider, creating massive smiles and boosted confidence – and that, let's be honest, is really what cycling's all about.

I think he means the Wiggins Chartres 24 disc. But it looks like a discontinued model and more of a hybrid hence not really comparable, but even at rrp it was a lot cheaper with a similar spec and a smidge lighter, but suspect fat tyres would change that.

its a decent bike my daughter has one.

Give us a link then!
zyghom 2 years 1 month ago