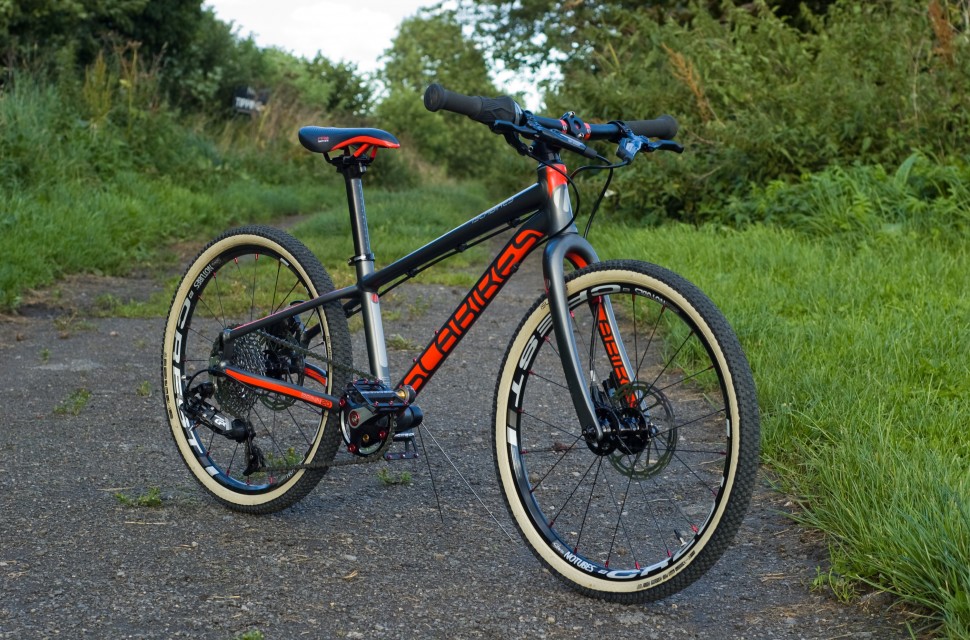 Jon Bateman
|
Sep 12 2017
|
Overall
Quality
Performance
Value
What's good?
What's not?
Buy if...
You're fed up with your young rider blaming the bike!

Any keen rider with keen-to-ride kids will be familiar with tweaking kids' bikes. Can I make it lighter, make it fit better, improve the brakes, find some gnarlier tyres? I've played this game on quite a few bikes now, one of which is a standard Islabike Beinn 20, so I was interested to see how the 'race ready' Pro Series version of the bike compares.

During seven years of continuous riding and racing by two young riders, my original bike has been 'improved' with fatter tyres, lighter pedals, carbon bars, 1x9 transmission (which involved building new wheels), and hydraulic rim brakes. I've invested a lot of time and love in that bike, so I was very curious to find out how much better Islabike's development of an 'ultimate' version of it could be. Clearly, you can make a more expensive kid's bike, but is it better... and better enough to justify the price? 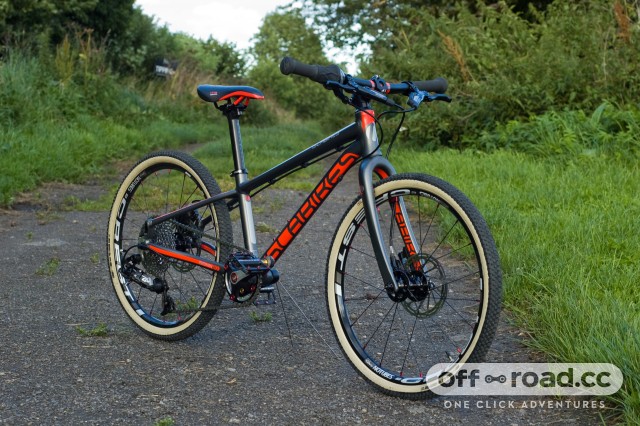 The Pro Series bikes in Islabike's range are pitched as no holds barred, high performance bikes for kids. These bikes shouldn't need any tweaking, they should be as good as it (realistically) gets. The whole Pro Series range is priced at a level that will make many parents wince and this model is no exception at a penny under a cool grand. The larger bikes in the series have close parallels with adult bikes, so it's easier to draw conclusions about their relative value, but with this model, and perhaps even more so with the smaller wheeled Cnoc 16 Pro Series, there is little around to peg your expectations against. 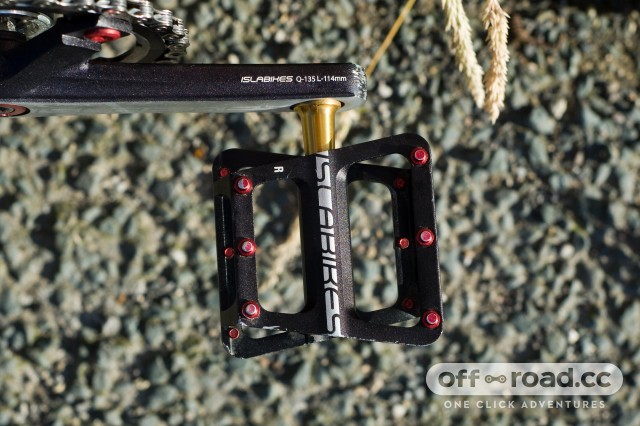 Unboxing and assembly gave me my first hint of the 'next level' that Islabike claims to have gone to with the Pro Series range. Grabbing the pedals to fit I was taken aback by exactly how light they were. Popping them on the scales revealed they were just 87g a side. Having swapped pedals when trying to put the original Beinn 20 on a diet, some quick mental arithmetic indicated that these Pro Series pedals were just a third of the weight of the pedals Islabike were fitting a few years ago. That's a massive jump. 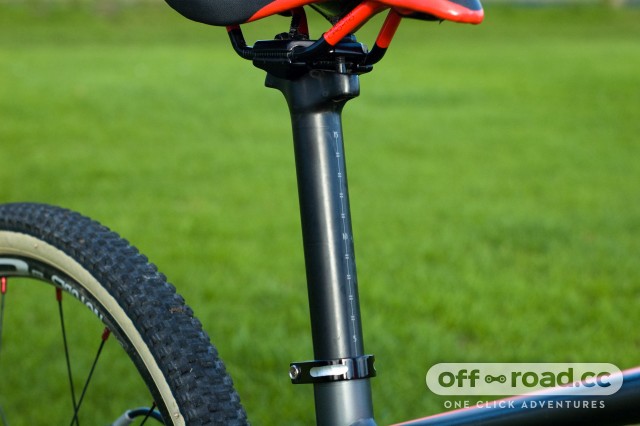 Fully assembled the bike clocked 6.35kg on my scales, under the claimed 6.5kg weight. One of the first things Ezra, our test pilot, did was pick it up and hold it over his head - not something many svelte 7-year-olds can do with their bike. Giving it the once over gave the overwhelming feeling of quality and thought in every detail, and the devil is in the detail with kids bikes. So what do the these details add up to?

Hitting the trails quickly revealed the cumulative effect these details might have. Dalby Forest provides our ride-from-the-door trails - typical well-worn trail centre fare with combinations of smooth, gravelly, muddy, lumpy, and positively-rocky, with a few steps and small drops thrown in. These present a solid test for small wheeled bikes, particularly at speed, and the speed our tester began to assault these trails had me calling him back and giving him unwanted advice on 'getting the feel for a new bike' and 'taking it easy until you're confident on it'. Deaf to my caution he was out of the saddle out of every corner and spinting for the next one. Rougher flat sections were powered through and taken at full speed. He dropped into rocky downhills without pausing and cleaned them better than he had done before. Even the long draggy fireroad climbs, usually met with an audible sigh, were romped up. 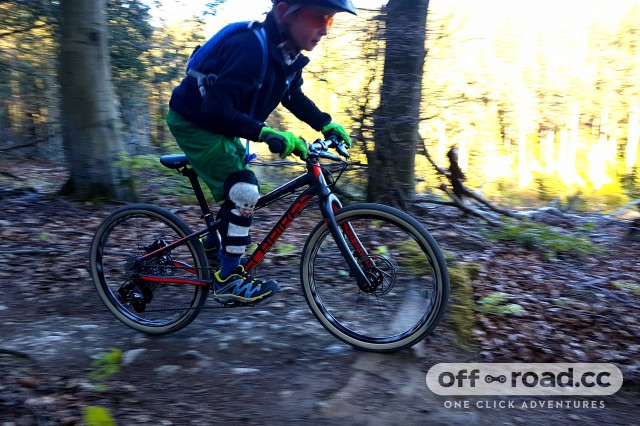 The bike was clearly having an effect, and picking at the details you can see why. The Pro Series is over 2kg lighter than his usual machine, and the details that contribute to that are seen wherever you look on the bike. From the carbon headset spacers to the titanium-spindled, carbon-shelled bottom bracket, weight has clearly been near the top of the list when speccing the bits. The frame and the full-carbon fork obviously contribute to the lightness but are also fundamental to the ride over the rough stuff. The frame proportions are just right, an aspect Islabikes have become renowned for, with a nice short back end combined with enough reach for a good attacking position.

If I were to pick one stand out element of this bike though, it would be the fork. It has enough flex to soak up the nasty trail chatter that can become debilitating for small riders' hands, whilst still being direct and confidence inspiring. Plus it looks great, with the brake hose neatly through-routed, and obviously, it's light - a triumph of design and a significant performance upgrade over an aluminium fork. Going hand-in-hand with the fork in giving the small rider control are the brakes. The test pilot loved the SRAM DB5 brakes in the way kids riding do, by not even noticing them - he just went and cleaned steep sections in perfect control, his minimal skidding showing how good the modulation was, and he never once complained of having aching hands from long braking sections. 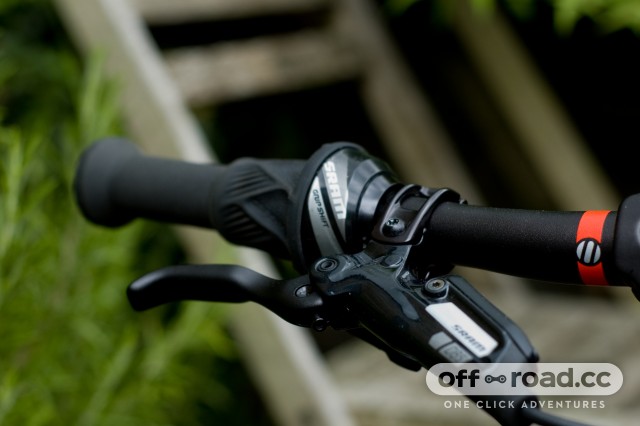 I'd noticed an irritating little problem with the reach adjusters though, which I'd written off as a design flaw when the levers were wound in close to the bars. However, it eventually became clear that this was actually a performance issue due to a manufacturing problem with a small batch of levers, and Islabikes and SRAM swung into action and rectified the issue amazingly efficiently. It gave me a useful insight into the level of customer care Islabikes can deliver, and also into the sort of constructive relationship a company of their relatively small size can develop with a large component corporation. 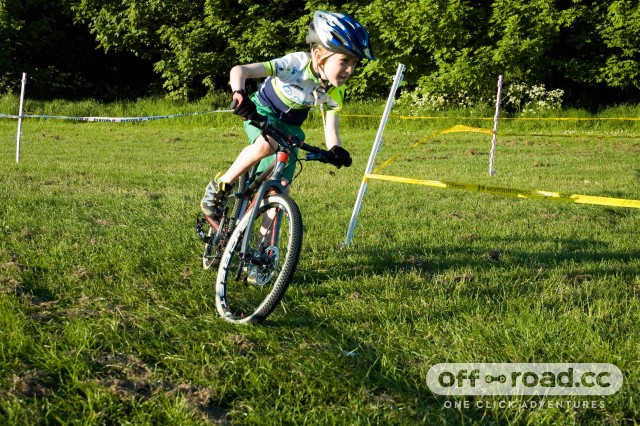 This bike was always going to get raced during its test. The tester loves racing, and I had a feeling this bike would too. Turning up at our local club's regular Go-Ride races did have the feeling of taking a NERF gun to a foam sword fight - there were a few sideways glances and the conversations skirted around the bike in an admirably British way. Saying how much it cost seemed almost vulgar. The results couldn't be avoided though - a three-from-three clean sweep of the under-8s on its first outing. There were no excuses, just a rider who wanted to ride fast and a bike that rewarded his efforts completely. The bike was in its element here. 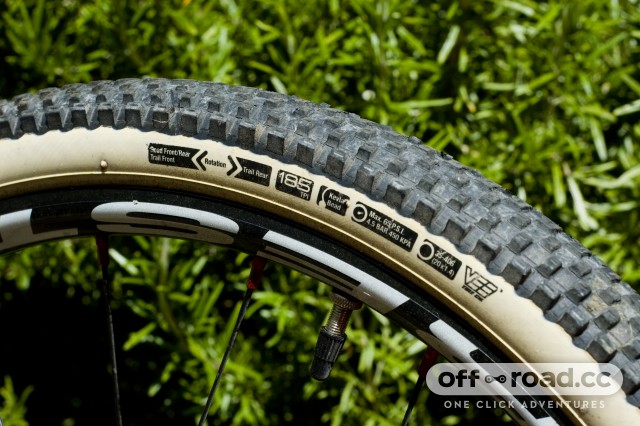 The fine-treaded, supple tyres are perfect on the grass and firm ground found on most kids courses. Away from racing they did lack a bit in both the rare bit of slop we found this spring and on some looser surfaces. It might be nice to see a slightly more agrressive option available, but the fitted tyres - kevlar-beaded and tubeless ready, made by Vee Tire Co - are some impressive rubber, particularly paired with the tubeless compatible Stans Crest rims. 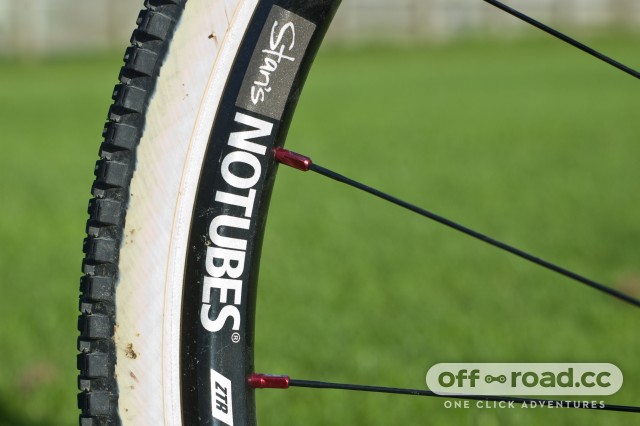 The wheels themselves hide another spread of those all important details. The Pro Series branded hubs are as good as you'll find on adult bikes costing more than twice as much. They are very neatly laced to the Stans rims with 20 of the most delicate spokes I've seen. The black 14/17 gauge butted spokes (that's just 1.4mm thick) and red aluminium nipples pull together a light and stiff wheel perfectly matched to the intended rider weight - there's a reason this bike has a 35kg limit for rider and luggage. I did unthinkingly hop on it for a post-fettle gear check, only to hop off very quickly at the sound of pinging spokes. There is also a 30cm drop limit, which I didn't notice until after the tester had exceeded it! 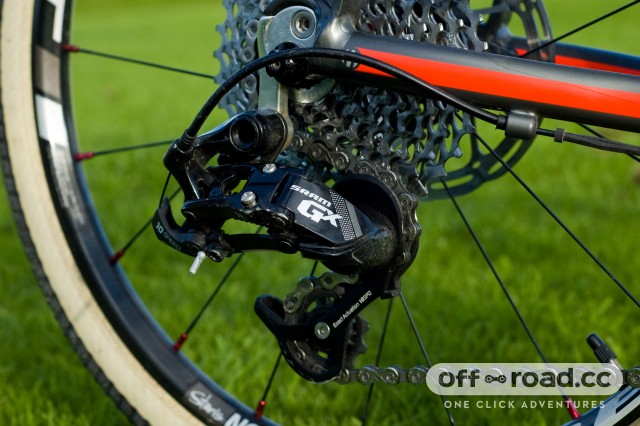 The gears themselves performed faultlessly throughout. The range provided by the 32 tooth narrow-wide ring, matched to the custom 9-speed 11-36 tooth cassette was never found lacking in regular off-road riding. The Grip Shift SRAM GX shifters have a lighter action than we've previously encountered with twist shifters and the tester happily roamed the gears up and down. With small wheels a long-cage rear mech can be a positive liability, so it was nice to see the short-cage SRAM GX derailleur keeping clear of the gloop and pesky rocks. It's a clutched mech too, which ensures the chain tension doesn't get thrown off going over rough stuff. That, the narrow-wide chain ring, and the perfect chainline afforded by the Pro Series cranks combined to ensure that not a single chain was dropped during testing.

This is a very impressive bike, made so by the combined effect of so many carefully considered details. Those details come so thick and fast on this bike as to be almost too numerous to mention in a review. The designers are clearly proud of them and some are subtly declared on the bike itself - the 135mm Q-factor is printed on the cranks and the 185TPI thread count is stamped on the tyres - but so many are only evident in the performance of the bike as a whole. Some elements push at practicality a bit. The carbon seatpost is lovely, and undoubtedly adds to the comfort, but will look a state after it's been up and down a few times - a carbon bar might have been an alternative choice. The tyres are fast and light, but sometimes a bit more guts are needed for proper off-road riding. But these decisions have been considered and made for good reasons and their effects combine to make a stunning bike.

I was fully prepared to dismiss this bike as an expensive folly, playing to a market in which I've seen secondhand Islabikes sell for more than their current retail price. A thousand pounds for a bike for a seven-year-old seems a ridiculous proposition at face value. This bike, however, demands a recalibration of your expectations of what a kids bike does. This a performance bike built for small riders, not a kids bike with a few upgrades and tweaks.

On those terms the details combine to remove all the negative caveats usually attached to kids bikes. There's no weight penalty, no performance penalty, and there are no excuses. Being able to free a young rider from all those restrictions comes at a cost, whether that is a price worth paying will be a very easy decision for most, and they won't be buying. For others the tantalising prospect of releasing and realising the potential they can see in their young riders will present a very difficult conundrum. After a few months of riding I asked Ezra for his thoughts - he simply grinned back "It's really fast!"