Skip to main content
Log In Register
Marin Headlands 1 2020 review £2,195.00
As engaging on road as on dirt, the Headlands is a masterstroke 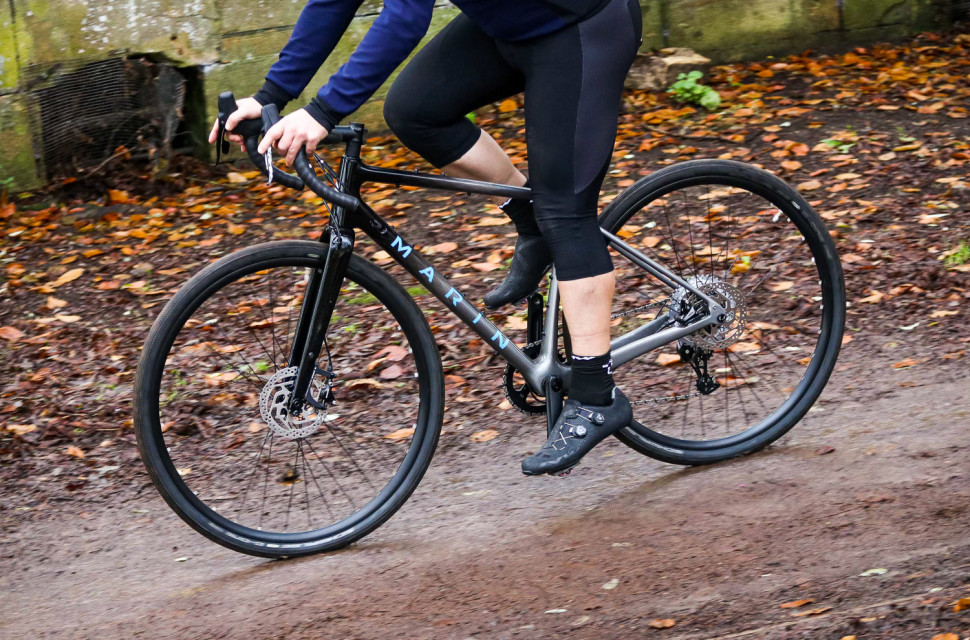 Stu Kerton
|
Dec 2 2019
|
Overall
Quality
Performance
Value
What's good?
What's not?
Buy if...
You want a bike that achieves plenty of roles as a winter commuter, bike packing adventurer, gravel blaster and all of the bits in between

Marin’s new Headlands 1 is a bike with multiple personalities. You can ride it like a hooligan on twisty technical trails while bunny-hopping rocks and roots, cover huge distances in comfort on gravel tracks, or just potter along with everything but the kitchen sink strapped to the bike. It’s a true all-rounder, if not quite as well specced as some.

Most gravel and adventure bikes focus on being stable and easy to ride off-road, which can make them a little tedious on Tarmac. With the Headlands, Marin is being a bit more daring – it feels much more like a racer than a tourer.

The highlight for me was getting out on the narrow, twisty byways with plenty of loose gravel, or up into the woods for singletrack fun. This 54cm test bike weighs just 9.46kg, and that means it feels light and more importantly, flickable.

Tearing down between the trees you can change lines and hop roots with ease, as the Headlands pretty much pushes you to go faster. Even when it gets out of shape in soft mud (which happens easily on Schwalbe's G-One Performance tyres) it’s a laugh. Feedback from the ground is spot-on, regularly allowing you to just style it out. 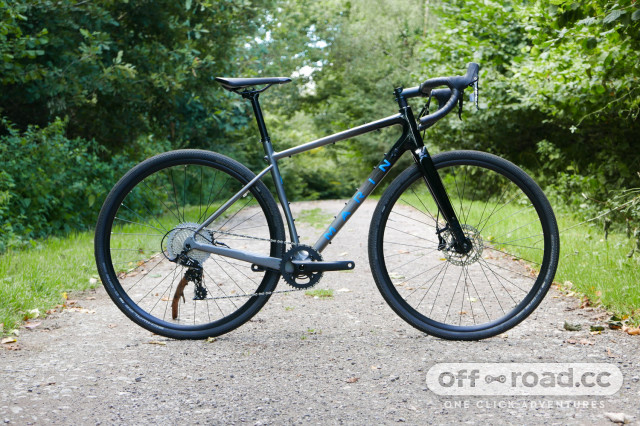 The shortish head tube allows a decent saddle-to-bar drop for a stretched-out position, putting your centre of gravity right where it should be for excellent balance. The slightest shift in bodyweight giving an instant and positive response.

Moving out of the woods on to the large, wide military byways of Salisbury Plain, I found the Marin just as much fun to ride.

Although the handling feels quick off-road, Marin has kept it just the right side of twitchy, so when you just want to cover lots of ground quickly you can do so with relative ease. It’s a relaxing ride, but still engaging enough to be fun.

Descending steep hills and nudging 50mph, the Marin feels planted and easy to control as I hop from side to side over rainwater ruts and the odd freshly dragged-out boulder... tanks, eh? They're not delicate.

With a loose grip on the handlebar and weight off the saddle to counteract the lack of suspension – especially at speed – the Marin tracks brilliantly, just riding up and over the random grades of aggregate covering the trail.

Climbing up the Plain's sudden dips highlights just how stiff the Marin’s frame and fork are. With a large bottom bracket area holding the chunky down tube and slab-sided chainstays, there's little of your power going to waste as you mash the pedals. 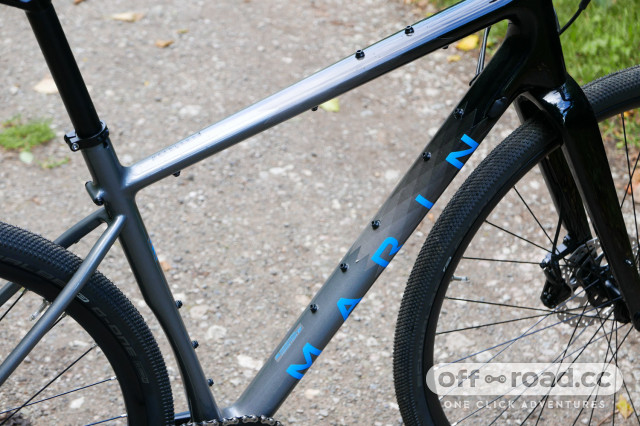 Fortunately, it hasn’t sacrificed comfort. The slender seat stays, plus a compact uni-directional carbon frame that leaves a lot of seatpost exposed, add a level of flex that dampens quite a lot of vibration. Clearly, tyre choice and pressures play a big role too, but I tried the Marin on various setups and was impressed with the overall ride quality.

Given the Headlands has mounts for pretty much every accessory, it seemed rude not to get out for a day-long trek around the Plain. So with saddle packs and frame bags loaded with food and essentials, I headed out. Having spent most of the test period blasting around on the technical stuff, I was a bit worried the Headlands' racy feel was going to make luggage-carrying tricky. 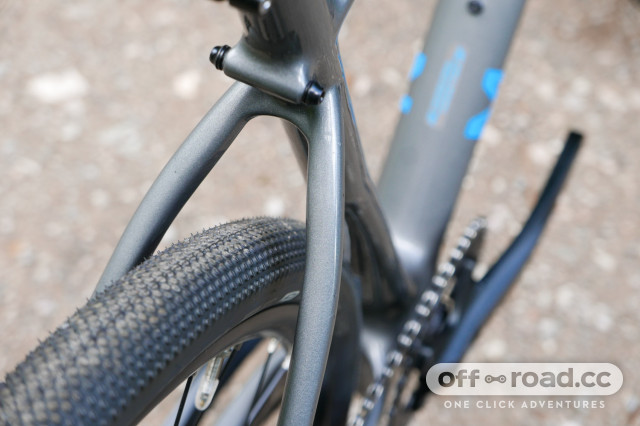 It didn’t at all. The Marin stays very composed under load, letting me just sit there and just tap out the miles enjoying the scenery. Even as darkness fell and I got tired it behaved, and if I did make a mistake it was easily rectified without too much panic.

For an epic journey across the wilderness, the Headlands should stand you in good stead. It’s a very comfortable and easy bike to ride for a long time, plus you know – should you want it or need it – you’ve got the handling and feedback to get you out of trouble.

Even on Tarmac the Marin is fun. You aren’t going to win any races, but it is certainly no slouch, and ideal when making your way to the next gravel section. It makes a confident commuter too, and of course takes guards and a rack. The stock tyres work pretty well on the road, but swapping to slicks boosts performance a notch. 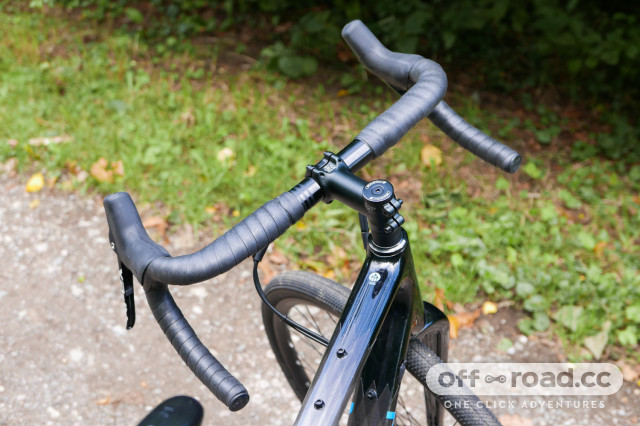 Unlike a lot of gravel bikes, which are based on road machines, the Headlands takes cues from mountain bikes with its longer than normal top tube and shorter stem. This gives you the stability and great body position that I mentioned earlier. Stack and reach work out as 581.8mm and 372.7mm respectively on this 54cm frame. The speed of the handling isn’t affected, as the Headlands' 60mm stem is about 50mm shorter than normal for this size of road or gravel bike.

The rear end is compact, thanks to a frame designed for single 1x cranksets only. Not having to accommodate large chainrings means chainstays can be short (just 420mm) and still kick out enough to reach the spacing required for the disc hub. They still give clearance for 700c x 45mm or 650b x 50mm tyres, even if Marin has had to curve a section of the seat tube to get everything to fit.

The resulting wheelbase for this 54cm model is just 1007.7mm, which still gives it stability but allows that nimbleness off-road that makes it so much fun to ride.

The head tube is tapered to increase stiffness and obviously there's a corresponding tapered steerer on the full carbon fork. The front end feels tight cornering at speed, plus the fork doesn’t chatter or dip when the brakes are hauled onto their maximum – they're certainly up to the job. As you’d expect, both frame and fork use 12mm thru-axles, plus flat mounts for the brake callipers.

One annoyance is that the nut that secures the axle on the fork isn't bonded in place, meaning it will fall off when you remove the wheel. That's just a pain if you have to put the bike in and out of a car, but should you lose it when you're changing or repairing a puncture at the side of the trail then you'd be in real trouble. It seems an easy fix to have it bonded in place - like pretty much every other fork on the market - so it seems very odd for Marin not to have done so.

The Headlands is designed to carry a multitude of stuff, with plenty of bottle cage positions and mounts on the top and bottom of the top tube for frame bags. It also takes full mudguards and racks.

Fully-internal cable and hose runs keep the frame looking smooth despite all that, and there's a port for internally routing a dropper post (something that comes as standard on the more expensive Headlands 2).

Overall quality is impressive, especially in the paint, which is very hard-wearing. Listening to all those stones and twigs whacking the down tube at speed left me expecting chips and scratches galore, but it just hasn’t happened.

If you're wondering why the graphics look a bit last-minute, it’s because this test bike is a final pre-production prototype. The ones in the shops will have a much higher level of finish and coats of lacquer. 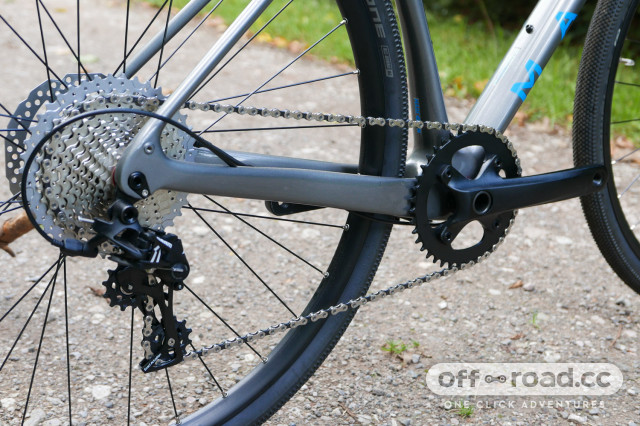 The Headlands 1 bears the main parts of a Sram Apex 11-speed groupset. You get the 1x shifter/brake lever combo, the rear mech and the brakes which, once bedded in, offer excellent performance from the 160mm rotors.

Shifting across the SunRace 10-42T cassette is crisp and precise and, thanks to the clutch on the rear mech, there are no issues with the chain bouncing around. The no-brand forged crankset looks a bit out of place on a £2,300 bike, though – I’d prefer to see a Apex model to tie in with the rest of the groupset. It does the job at least, with a 40T narrow-wide chainring keeping everything secure even when the terrain gets rough. 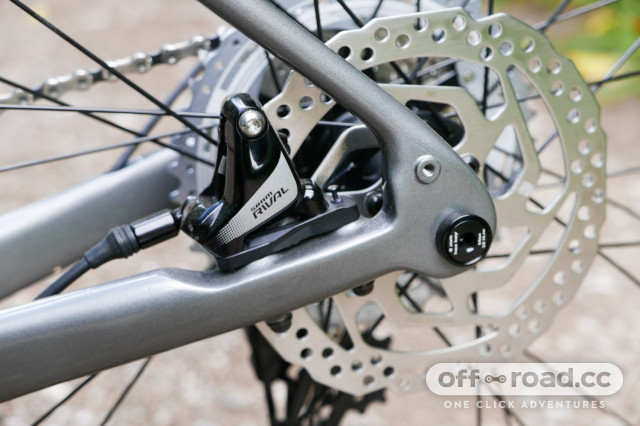 Contact points are own-brand bits from Marin, and they're functional if not necessarily exciting. The handlebar has a flattened top for a larger grip area, plus the drops are flared by 12 degrees, which for me is the minimum necessary on a gravel bike. It’s a comfortable place to rest your hands, especially with the nicely-padded bar tape. The Marin saddle is pretty good too. It offers firm padding for support while taking the sting out of bumps, and I got on well with its flat shape and narrow nose.

Down on the wheels you get double-wall rims from Marin with a 21mm internal width and depth, mated to 32-hole forged alloy hubs. Like the bar and stem, they get the job done without really blowing you away, so there's definite scope for upgrading. Testing the bike with a £300 set of Hunt 4 Season Gravel Disc X-Wide wheels for instance, made a huge difference to how it felt everywhere.

One thing I do like are the tyres. Schwalbe’s G-One Performance tyres work very well on the road despite their dimpled profile, and give decent grip on hardpack. If the going is soft or the gravel deep they do squirm a fair bit, which at times can be fun, but for winter at least I’d be upgrading to something with a little more tread.

There's some tough opposition out there around the two-grand mark, most notably in the new GT Grade Carbon Expert that David recently reviewed. For £2,000 it wears a Shimano 105 groupset, FSA Omega 46/30t chainset, WTB rims and neat additions like a Fabric Scoop saddle and carbon post. It’s a lot of bike for the money!

The £2,300 Marin is also pricier than the Kinesis Tripster AT at £2,200, but I’d say the Headlands offers more versatility and, arguably, a more fun and responsive ride.

Gravel bikes remind me of those rigid mountain bikes I loved riding back in my teens. The lack of suspension means even the simplest tracks and trails require total focus on rocks, roots and anything else lurking to wipe you out.

The Headlands brings all of that back and then some. Being so light and having such direct handling off-road – yet with plenty of stability – it’s not just fun, it is an absolute joy to ride as fast as you can.

The way it's still engaging on the road or when loaded up is Marin's real masterstroke. There are a few tweaks I’d make to the finishing kit, but other than that this is a really good bike, straight out of the box.

Great review, thanks, this bike, or probably the Headlands 2 is on my shortlist now. How would you compare it directly to the Diverge? Geometry seems quite similar. While the Diverge has Future Shock, this one has better tire clearance. Which one is more comfy and which one more fun in your opinion?