Skip to main content
Log In Register
Giant Fathom 2 2020 review £1,099.00
Beefed-up XC hardtail is fun on natural rides, but geometry holds it back on serious trails 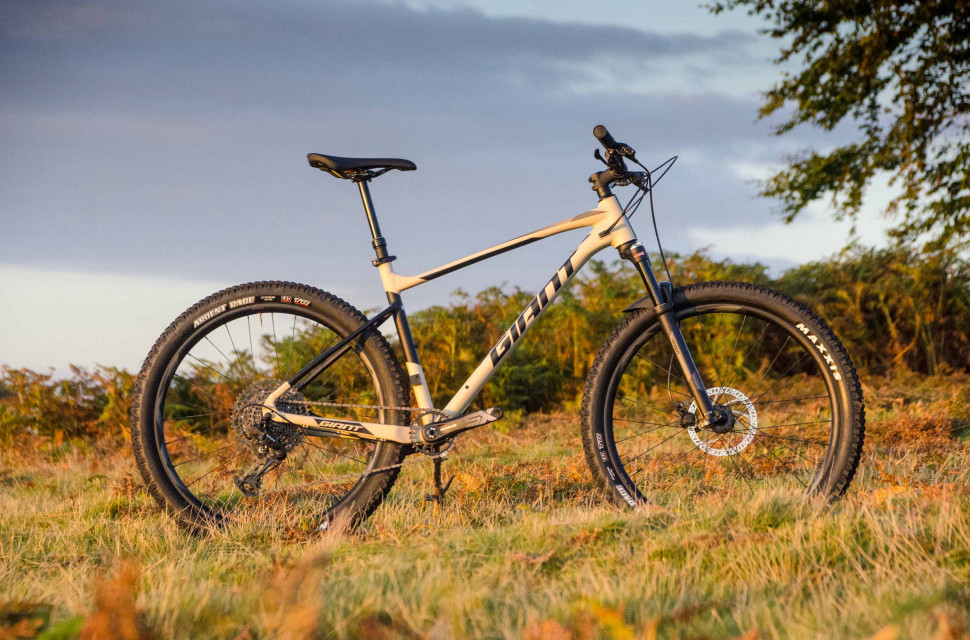 The 2020 Giant Fathom 2 is a beefy, 120mm-forked hardtail with big tyres, wide 650b rims and broad bars. It’s a reliable partner for big rides on natural terrain, but the short, tall geometry and mediocre Suntour fork hold it back on technical, twisty trails. If only the Tektro brakes did the same…

There are two specs of the Fathom, with this one being £200 cheaper than the Rock Shox-fronted Fathom 1. The frame at the heart of them is identical, though, and it’s a stiff, solid thing built from Giant’s ALUXX SL-Grade aluminium alloy.

It features dropped seat tubes to take some of the sting out, though arguably the 2.6in Maxxis Ardent Race tyres on Giant’s 30mm internal rims do more about that. 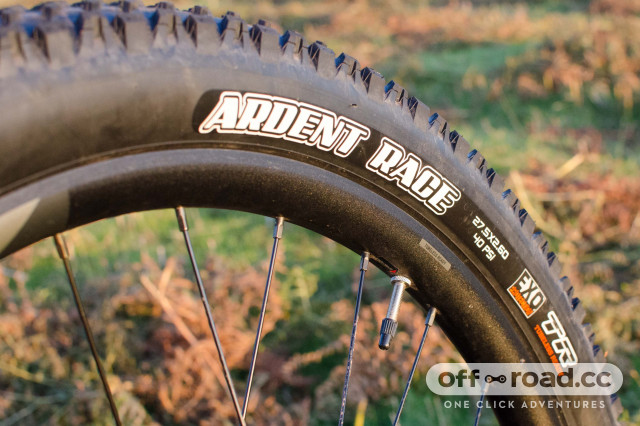 The tyres roll well even at low pressures, and the EXO TR casing copes well with rocky impacts while being, of course, tubeless ready for even lower pressures. It’s worth noting that the Ardent Race, should you want a replacement, isn’t currently available in the UK in this 2.6in width. 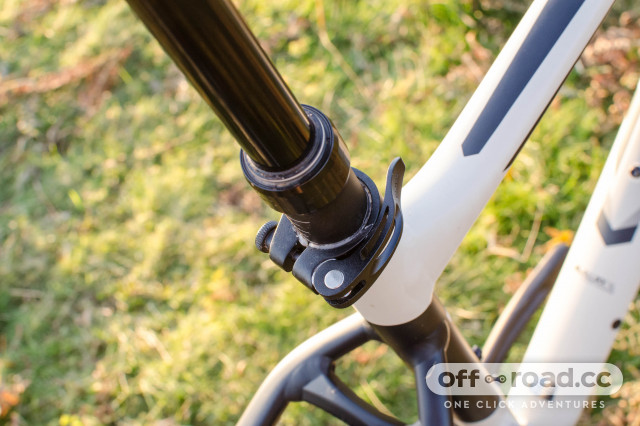 The top tube slopes meaningfully for good standover clearance, but the bottle cage bosses stop the Contact Switch dropper post pushing all the way into the seat tube – there’s around 2.5cm still sticking out. I had no issues getting the saddle height right at full extension, though (I’m 185cm and tested a Large), so the inconvenience was minimal. 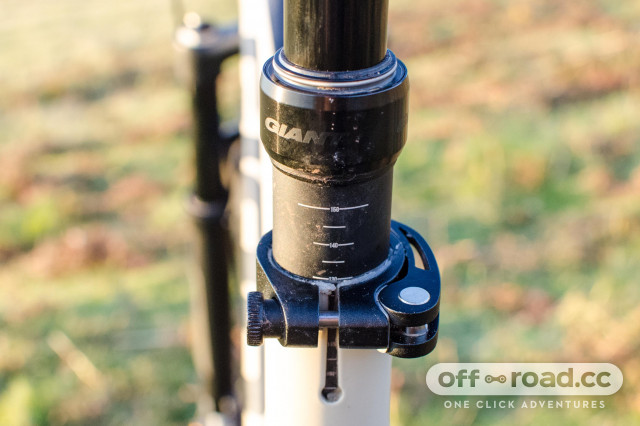 There’s a blanked-off mount for a front mech should you want to run a 2x transmission, but the SX Eagle 30t front ring and 11x50t cassette create an excellent spread that disguises its 13.5kg heft well. You’re unlikely to want more ratios – especially as the geometry makes steep, techy climbs difficult way before the gearing does. 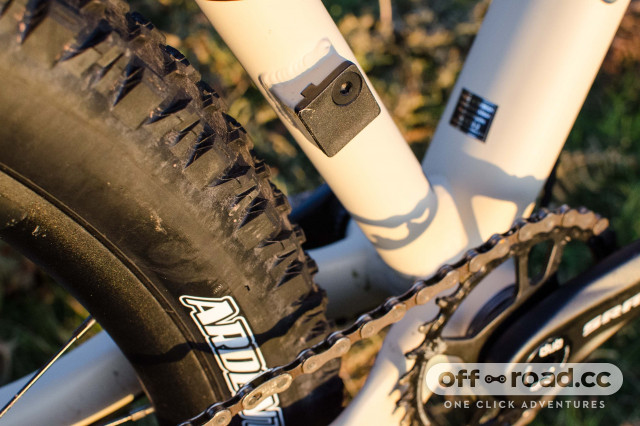 To put it bluntly, the Fathom 2 feels like a 100mm cross country-ish hardtail jacked up on 120mm forks. The 45mm BB drop puts your feet pretty high above the ground for a rather disconnected feel when tackling tricky climbs, and combined with the fairly short 444mm reach (Large frame), short 425mm chainstays and slackish 73.5 seat tube, the whole plot gets wandery and imprecise at critical moments. 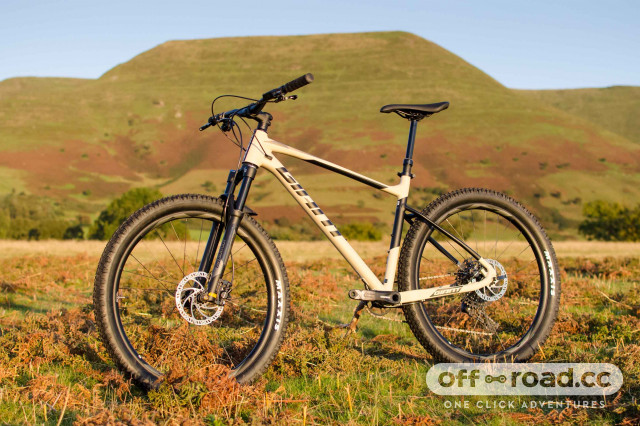 It’s a similar story on steep, rough descents, where the short and not-very-slack 67 degree front end and tall BB conspire to exaggerate the effects of small weight shifts, while rendering cornering slightly remote and unsettled. 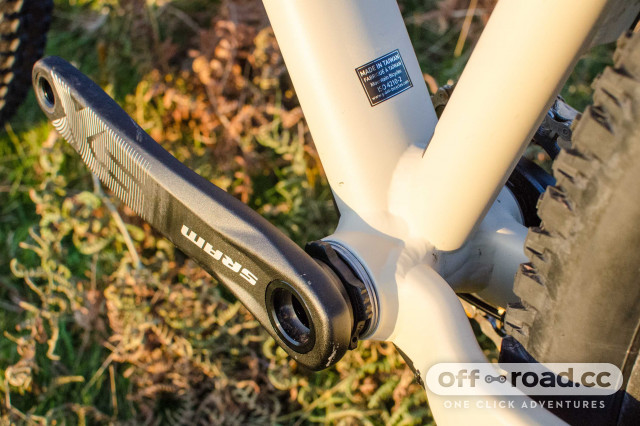 It’s by no means terrible – and the extra ground clearance means it’s good at blowing through rocks without catching a pedal – but it can’t really keep up with its own big, confidence-inspiring trail tyres. 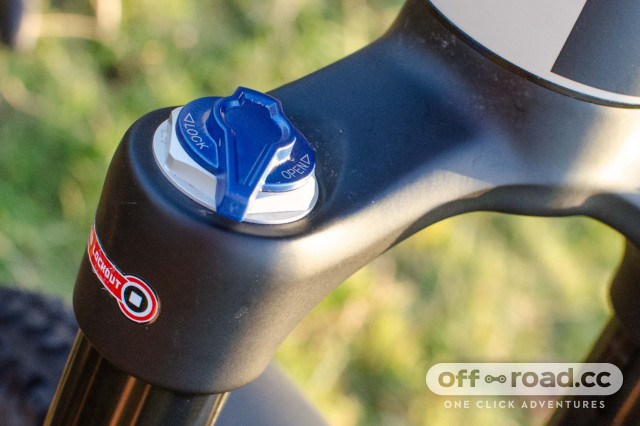 The SR Suntour fork tries to help, and features useful rebound and compression damping adjustment for tuning response, but there’s only so much it can do with such a flexy chassis, a mostly very linear stroke, and a loud bottom-out thunk. 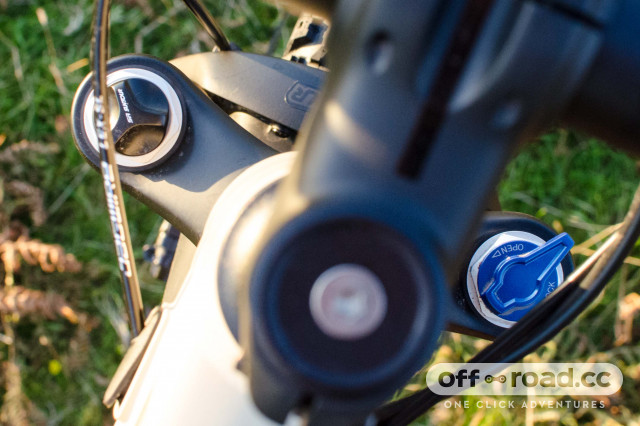 Though very insensitive to small bumps at first, the Raidon XC LO-R loosens up pretty well after a few rides, and the compression damping – which produces anything up to full lock-out – helps stop it running quite so eagerly though most of its stroke. It ramps up hard and fast at the end, though, and gets flustered at big impacts. 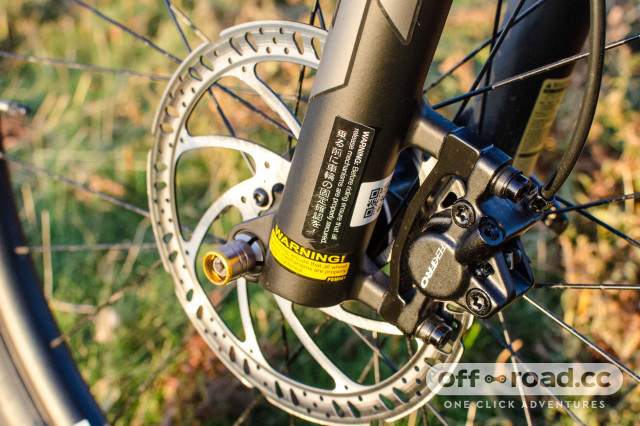 The axles are Boost spaced, and while Suntour’s 110mm through-axle is beautifully made, it’s strangely overbuilt, fiddly to use until you learn its quirks, and can jam inside the hub if you get it wrong. Meanwhile the rear is 141mm but not screw-thru, and sits in open dropouts. 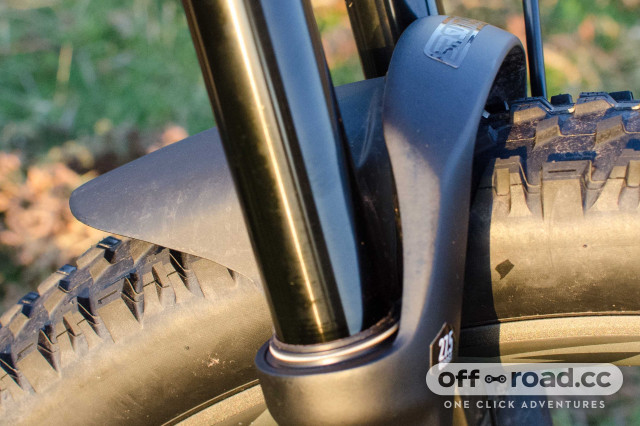 Oh, and the little fork crown mudguard, while it looks neat, does little to stop you getting a facefull of mud on wet descents. In fact, it ends up with as much filth on top of it as underneath, which doesn’t say much for its shielding abilities. 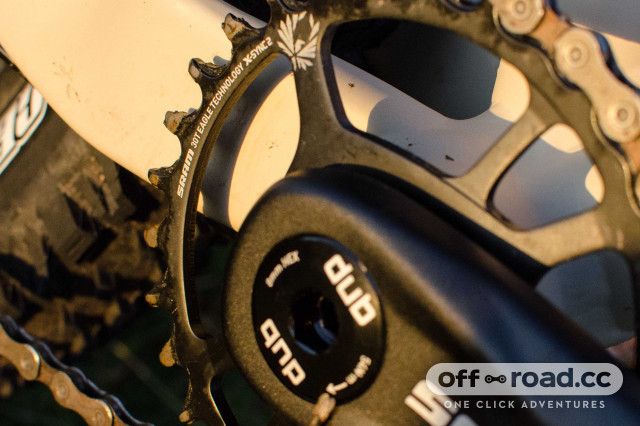 The hubs are Giant’s own, though only the front has sealed bearings – the rear runs loose balls, which need careful lubrication and tensioning if the hub is to last. Another potential maintenance issue is the press-fit SRAM DUB bottom bracket which, though a stiff design, can get creaky and hard to remove. 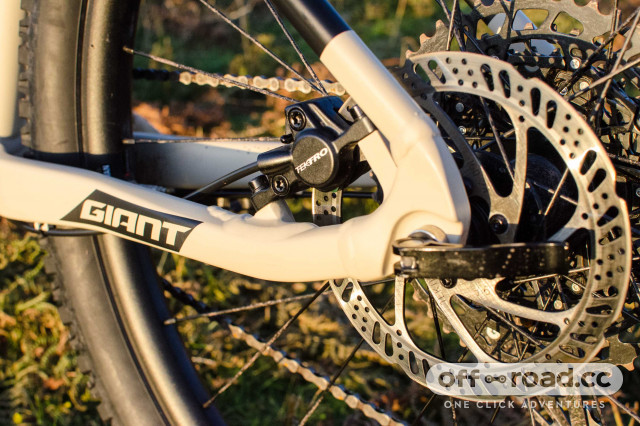 If I haven’t yet mentioned the brakes it’s because I’d forgotten about them, which is fitting as pulling the levers makes you think Giant might have forgotten them too. Out of the box the Tektro HDM 275s do almost nothing to slow the Fathom’s roll – especially at speed on tarmac – and it takes several deathgrip rides to bed the pads in for any kind of response at all. 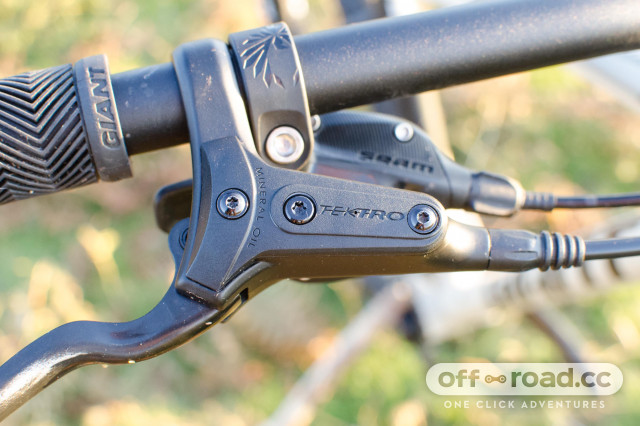 Even then, any meaningful response means two fingers minimum on the levers, and I’ve actually worn the paint off the front lever from crushing it so hard.

The Connect Trail bar is at least well-shaped and a good 780mm width, while Giant’s stem does the job and is size specific – the 60mm one here feels a little long in itself, but given the reach and head angle you’re unlikely to want it shorter. 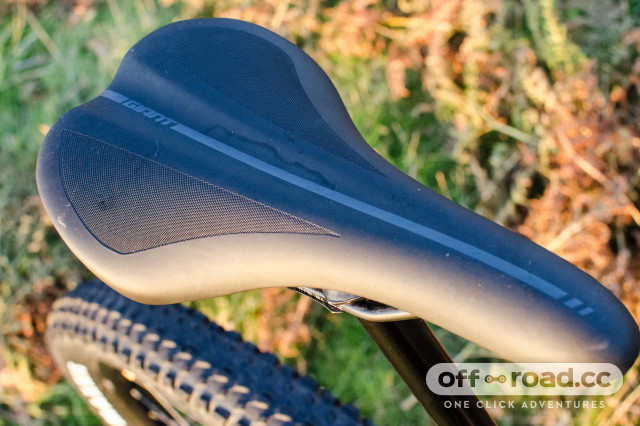 The grips and saddle are own-brand too, and while both worked very well for me, lock-on grips would be preferable and the saddle may be slightly too firm for some.

At £1099, the Fathom 2 matches the price of both the Specialized Fuse 27.5 and the Vitus Sentier 27 VR. While the Fathom is lighter than the 14.2kg Fuse, that sits on Plus-size 2.8in tyres for serious trail-smoothing, while 13kg Sentier – which we loved in its £1000 29 VR guise – has a fantastic frame far better suited to trail work. 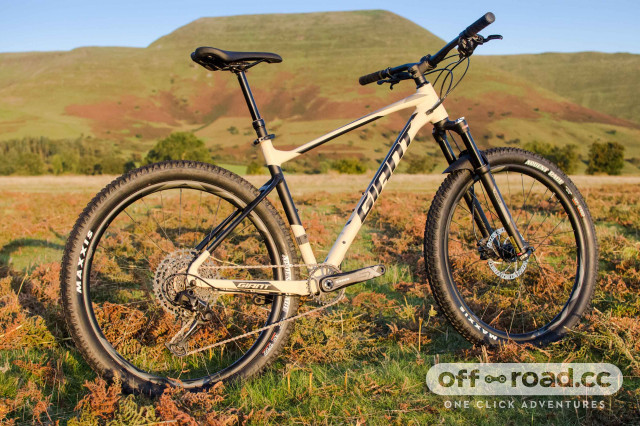 Other options include the Sonder Transmitter SX Eagle at £999, which again out-handles the Fathom (we tested the £1,299 Transmitter NX1 Revelation spec here), or the base model of Bird’s fantastic aggro hardtail, the Zero AM, at £1350. We reviewed the still-current MK3 frame in 2018 and were impressed.

The Giant Fathom 2 is a pretty likeable hardtail that – despite the chunky looks – is most at home on the sort of rolling, not-too-technical natural rides that are more cross country than trail.

The supple, large volume tyres on wide rims, and 120mm travel give it good survivability when things do get rough, and it’s pretty surefooted on straight plummets, but push hard in the corners and you soon find the limits of its short, tall geometry, and the basic fork and brakes.

£500+ of Altura AW21 Aparrel and Bags to be won
Altura launch their AW21 range and we've got clothing and bags worth £500+ to give away to one lucky reader!
News

Canyon widens the Spectral family for 2022
The Spectral now gets all of the wheel sizes, an alloy option and new CFR build
Review

All-City Gorilla Monsoon Review £2600.00
A comfortable, smooth handling beast of a bike that'll cope with whatever you throw at it
Review

SMOOVE Universal Chain Lube review £15.00
A truly universal all-weather lube that stays smooth and sticks but it is a bit pricey
Feature