Skip to main content
Log In Register
Cube Stereo Hybrid 160 HPC Actionteam 625 27.5 2020 review £5,499.00
If you're after a large battery capacity e-bike and get on with the sizing, this Cube offers a great mixture of value, spec and outright ability 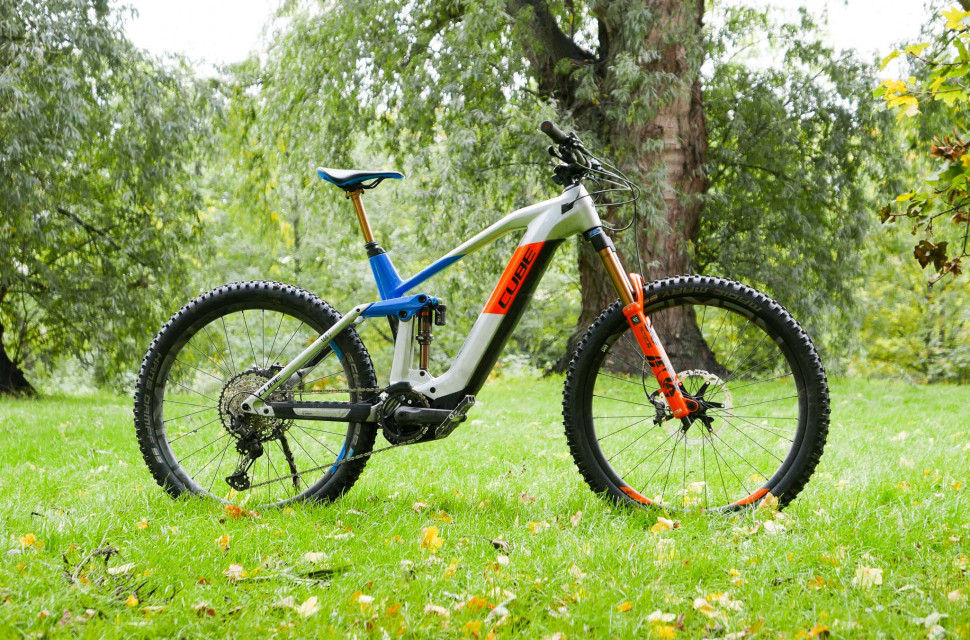 Jon Woodhouse
|
May 29 2020
|
Overall
Quality
Performance
Value
What's good?
What's not?
Buy if...
You're a rider that wants a full-size e-MTB for going hard with maximum grunt and range

Cube's snappily named Stereo Hybrid 160 HPC Actionteam 625 27.5 is a full-fat e-MTB that offers up a large battery capacity and latest generation Bosch drive unit mated to a sleek carbon frame with solid trail-taming capability and some great kit for the money. The only real issues were an unexplained rattle from the motor unit and the substantial weight.

While Cube's naming of its bikes might be as ungainly as your pick of large mammal on slippery surface, it's at least very descriptive, telling you that this is a carbon fibre framed e-MTB that sports 160mm of travel at the back and rolls on 650b wheels. The Actionteam signifies that you get the same paint job as Cube's (meat-powered) enduro race team and the 625 is the battery capacity in Watt-hours, the largest Bosch offers.

That sleekly integrated battery is paired to Bosch's latest, top of the line Performance CX drive unit, which does away with the overgeared tiny sprocket of the previous generation and uses a normal-sized chainring to drive it, much like Shimano and Brose. 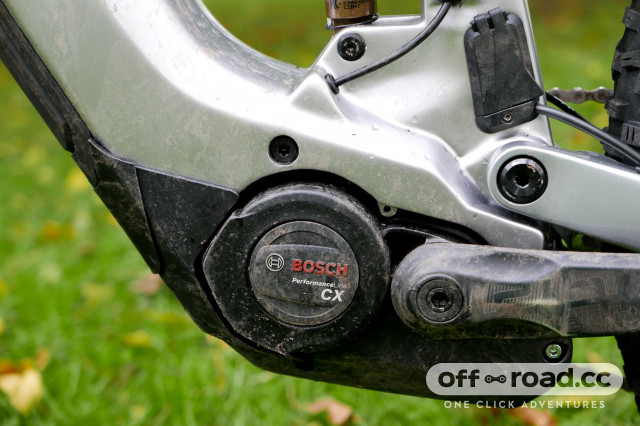 That offers up some big benefits in terms of less noise and lower friction; should the worst happen and the battery die before you're home, you'll only be fighting the weight of the bike instead of that and the huge internal friction of the old machine. It also makes it much easier (and worthwhile feeling) to keep pedalling once you hit the 25kph assistance speed limit. 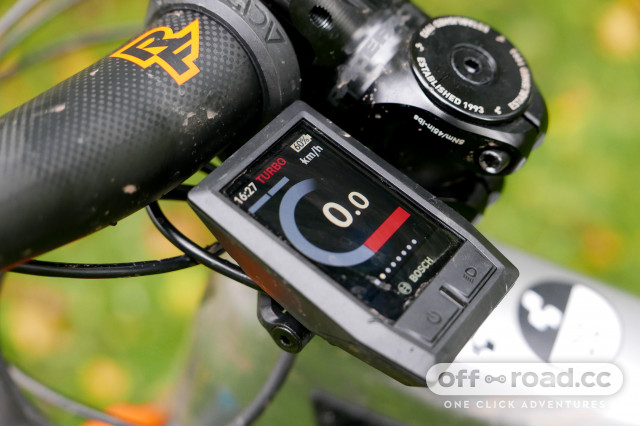 Up until that cutoff, it's a mighty meaty feeling unit, with prodigious torque and the ability to offer up to 340% support in the highest assistance modes. Bosch's eMTB mode also does it's best to make all that extra electric grunt feel as natural as can be. The Kiox display unit has full colour and, though the clamp is rather flimsy, it's out of the way of damage. It offers up all the information you could want and the graphical layout of information is rather cool too. 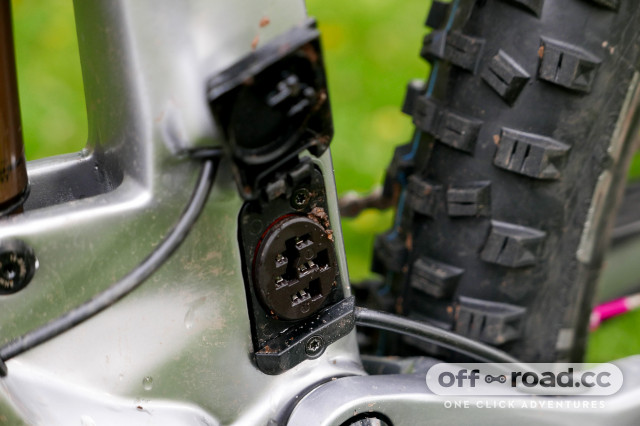 It certainly feeds the power in a much more manageable way that the old drive unit did; 'Turbo' mode on that felt exactly like the sort of lag followed by explosive power and occasional terror that would have been familiar to drivers of the infamous (and banned) heavily boosted Group B rally cars of the 1980s. It's much less likely to shunt you off the edge of a trail because you made a quarter pedal turn around a slow, tight corner nowadays, which has got to be a good thing. 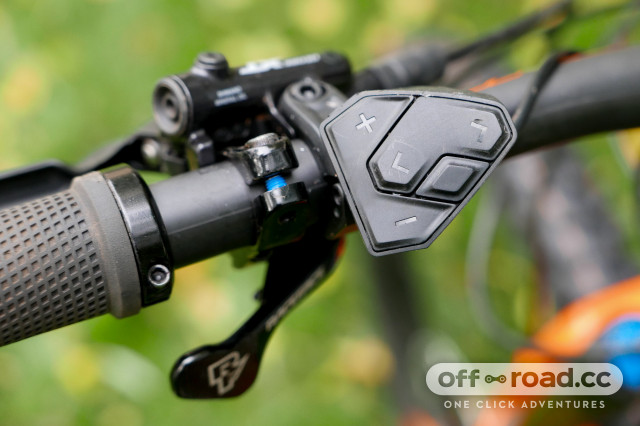 However, the drive unit on this bike had a rather annoying rattle. It was fairly hard to track down at first, sounding like a loose shock bolt or similar over rough ground, but there's a small amount of play between the chainring and the internal freehub of the drive unit that's rattled about as the chain growth tugs on the two. I spoke to Bosch but to no avail as to whether this was a standard feature or a specific issue with this bike; I've not ridden enough of these new units to say for sure, though it didn't affect riding function in any way. 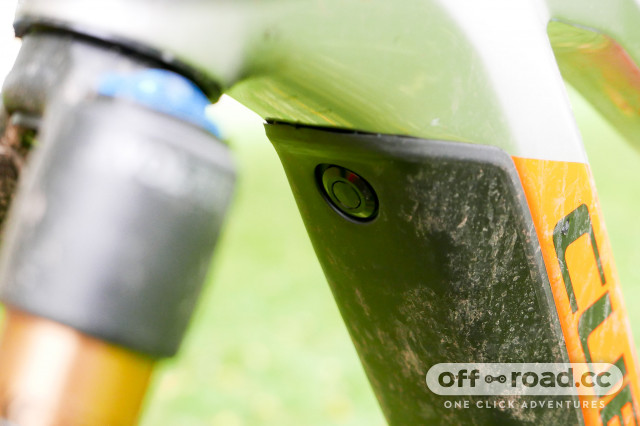 The 625Wh battery has an external cover that gets a rather neat motorsports-spec pop-fastener to secure the cover. The battery itself is mounted to a separate subframe then the frame rather than the front triangle itself. That's said to make any maintenance work that involves removing the battery much faster. It provides a pretty epic range too; at around 68kg I could do over 1,000m climbing on a single charge.

Of course, like most full-sized eMTBs, there's a fair bit of bulk to carry about, but the 24kg mass isn't too bad when you factor in the range. Having some of that weight further up in the frame felt noticeable to lower speeds, but once you're cranking along it helps the bike really plough through the rough stuff. 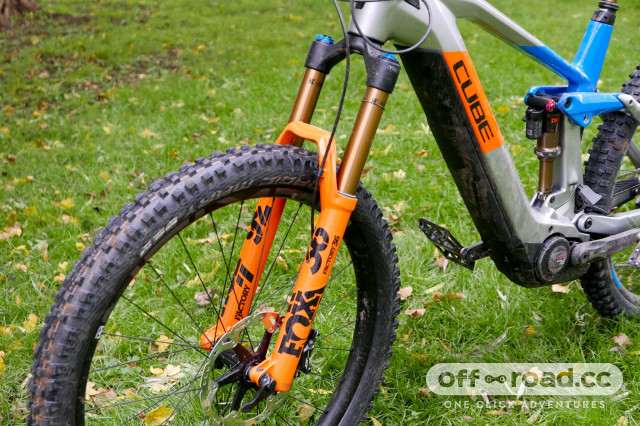 The 170mm Fox 36 fork gets the FIT4 damper with an e-bike specific tune and that seems to work really well to give a plush and planted feel, along with the high sprung to unsprung weight ratio. It's not as adjustable as the FIT GRIP2, but the damping is really well composed, which gives you confidence that the front end will hold, especially under heavy braking.

A solid spec, save for undergunned rear shock 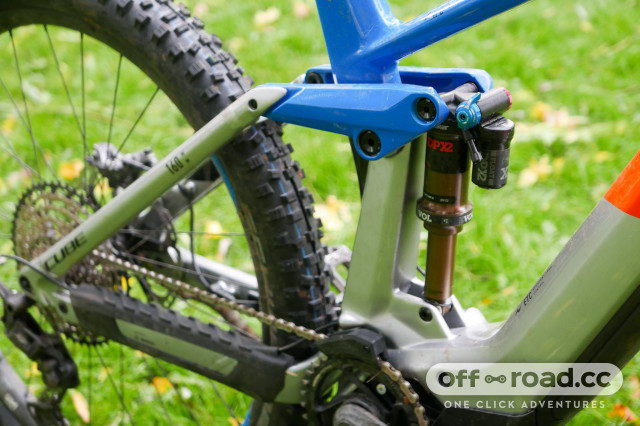 The back end of the bike is fairly linear, so harder and heavier riders will find stuffing a larger volume spacer into the DPX2 shock makes a useful difference to preventing excessive bottom-out on big landings or compressions. I'm not too convinced about the wisdom of choosing this relatively lightweight trail shock for a long-travel heavyweight e-bike. On longer, rougher descents, it was getting pretty hot and the rebound damping got noticeably faster - I think Fox's enduro and DH X2 air shock would be a much better match all-round, especially for heavier riders or those intending to take on big mountain riding. 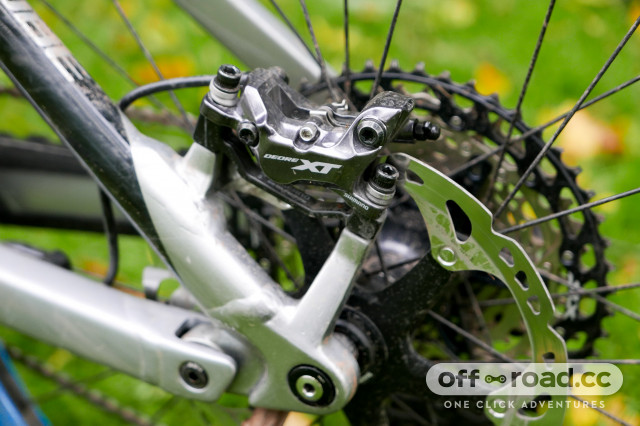 Elsewhere on the bike, it's a very solid spec. Shimano's 12-speed XT drivetrain gave excellent gear range and smooth shifting, while the matching four-piston brakes had plenty of power, though once again marred by a shifting bite point at the lever. You also get Shimano XT hubs mounted to 35mm wide Newmen rims. Despite only having 28 spokes, they were stiff and solid and gave a good profile to the 2.6" wide Schwalbe tyres.

The combination of Magic Mary in stick Addix Soft compound and Hans Dampf in faster rolling Addix Speedgrip was a good one, though for some reason my test bike had a thinner casing rear tyre than the very durable Super Gravity that's supposed to be specced at both ends, which made itself known with an almost instant puncture. 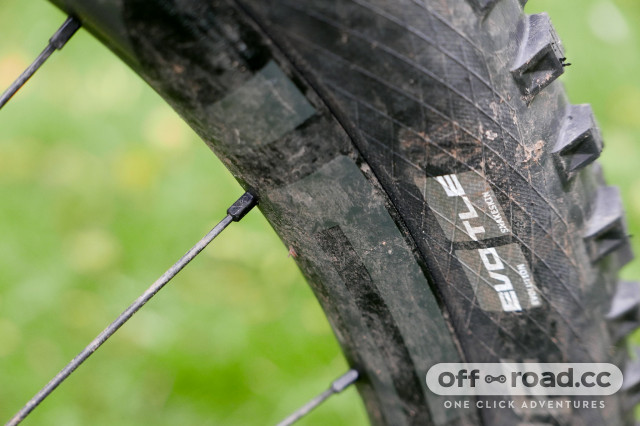 The Fox Transfer dropper post is a smooth and reliable operator, with the large and extra-large bikes getting a 150mm travel post, though only a 125mm on the medium and just 100mm on the small. That does highlight that the geometry of the bike has a pretty tall seat tube for a given reach, which may hamper riders that want to size up. 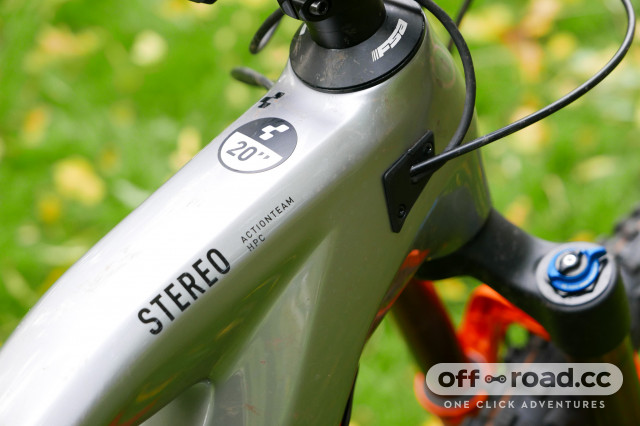 Many will, given the relatively conservative frame sizing. At 172cm tall, I went for the 20" frame, which has a seat tube of 470mm and a reach of 460mm and I just about fitted with the post fully slammed in the frame.

However, while I like a long reach on normal bikes, I find it less critical to handling stability with an e-MTB, where the extra weight in the chassis does an awful lot to help keep things feeling planted on rough or steep terrain. The head angle felt good at 65° and while the seat angle isn't hugely steep at 75.5°, it's enough to get in a half-decent position for steep climbing if you slam the saddle forwards on the rails.

I found I got on well with the 650b wheels too; the bike retains as much agility as you can expect from a hulking big bike, aided by the leverage from the 800mm wide Race Face bar and dinky stem.  At 441mm, the chainstays aren't too huge so, provided you're feeling strong, you can loft the front end or chop it into tight turns. It's surprisingly manageable on flatter trails and still capable on the steep descents too. 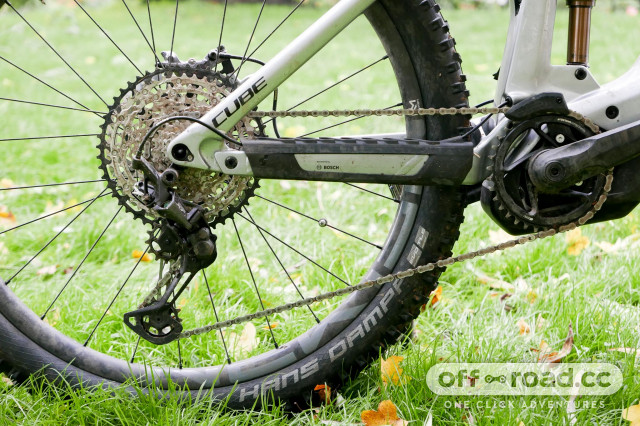 If you're in the market for a full-size, long travel e-MTB, there's a lot to like about the Cube. It offers very good value considering the kit and quality of the frame and if you can get on with the fairly conservative frame sizing then it delivers a good match of rough trail smashing ability with handling that's still easy to be on top of if you want to thread it through flatter, twistier stuff. 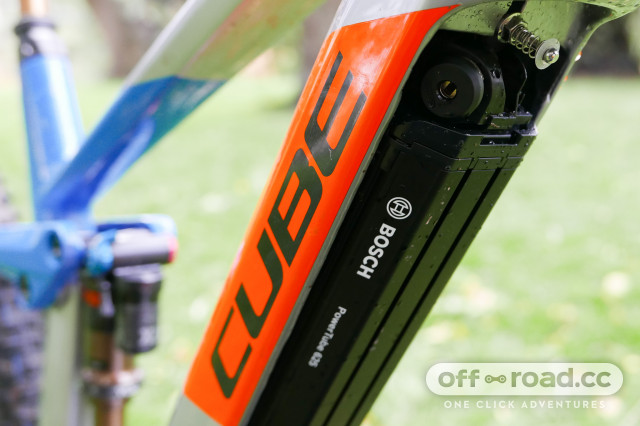 While there's no getting over the bulk that having a big capacity battery and full-power motor brings, the Bosch drive unit is powerful and refined, with enough grunt to get you up some truly ridiculous climbs, over and over again. Bikes like Specialized's lightweight, mid-powered Levo SL might make a lot of sense for many riders after an assisted biking experience without the bulk, but there's no substitute for power and range for many riders and the Cube scores big on that front, rattling drive issues aside.