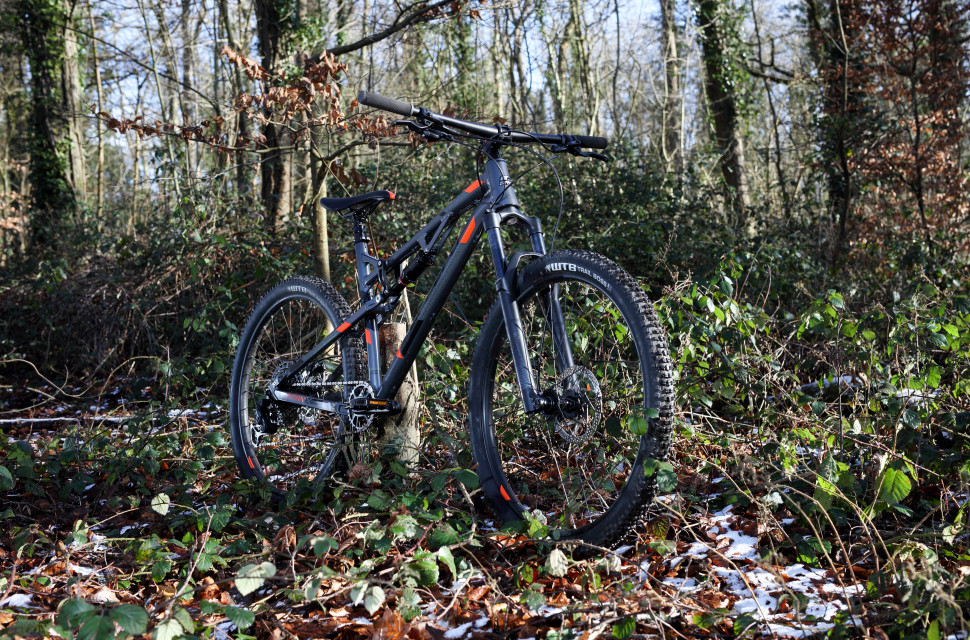 Liam Mercer
|
Mar 9 2021
|
Overall
Quality
Performance
Value
What's good?
What's not?
Buy if...
You're looking for a full susser and want to spend as little as possible

The Titan X from Halfords brand Carrera offers the benefits of a full-suspension mountain bike for a very modest sum. It boasts all the mod cons with the spec of bikes twice its price, but while its suspension platform is a shining aspect, its geometry could be tweaked to cater to a wider audience.

The Carrera Titan X is built around a rather purpose-built looking alloy frame and rolls on 650b wheels. It gets 130mm of travel at both ends, and the whole build weighs in at 15.8kg, which is definitely quite a bulk. 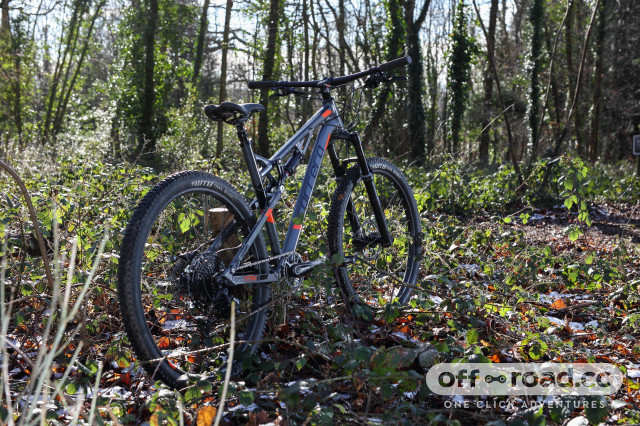 Let’s kick things off with the fork. The Recon RL from RockShox is simple and gets the job done. You get a compression dial and a rebound adjustment with just five clicks to play with and, while this makes it incredibly easy to find a setting, there isn’t much space between mega springy and reluctant to return to full travel. So you may have to compromise.

It’s a lovely surprise to see a bike of this price kitted with a thru-axle at the front, and that adds a welcome handful of stiffness to the front end. With its reasonably flexy wheels, it’s definitely needed. 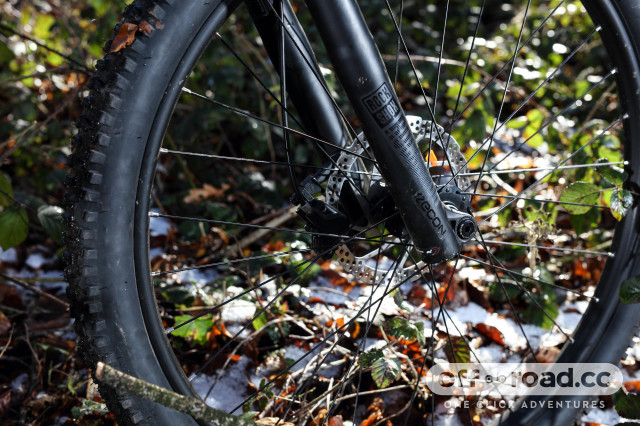 On the downside, the Recon is reluctant to break into its travel from the sag point, and it’s not the most active of suspension. It soaks up big and square-edged hits, but it’s not the greatest at tracking uneven ground. Slam it into a rock garden and it’s quickly overwhelmed, and that’s when you wish its rebound adjustment was more refined.

However, in this price range, there are few forks with thru-axles that perform better than this Recon RL.

The rear suspension on the Titan X is rather impressive – in fact, it massively outshines its fork, and even outperforms platforms on some more expensive bikes. Much like the fork, the RockShox Monarch R shock is nice and simple, coming with ten clicks of rebound adjustment for easy fettling. 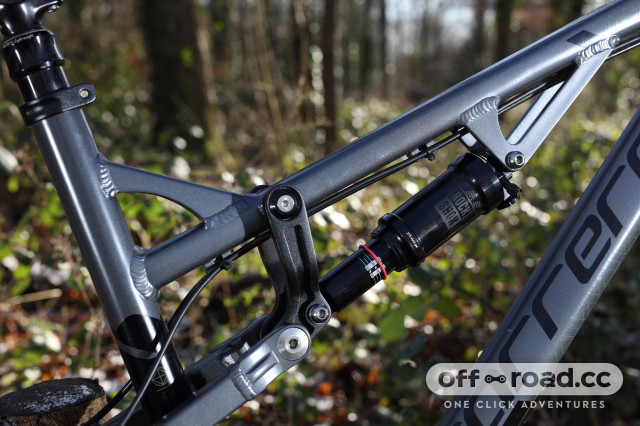 The rear end is impressively active without becoming a burden, and it soaks up small bumps very well. It's super comfortable when seated, and the bike is a pretty good peddler. Granted, it does tend to bob a bit, but it’s never enough to become a pain, which is definitely a plus as there's no lockout.

The only thing that makes life more difficult on the climbs is the bike’s weight, which is absolutely more noticeable when hulking it up a hill.

When things speed up, the rear end is well composed even on terrain that makes the fork recoil in horror. It’s not too wallowy either, staying supportive in compressions and firing you out of berms and compressions with a welcome helping of pep. That said, it’s not the most playful of platforms – due in part to the bike's heft – but it balances a forgiving level of plush with a supportive mid-stroke. 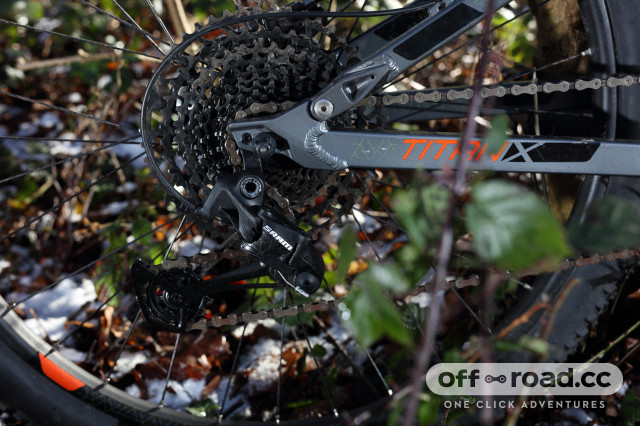 This bike is graced with SRAM’s SX Eagle drivetrain, meaning you get 12 gears to play with, which only adds to this bike’s impressive value. It’s not the lightest nor is it the most refined of drivetrains but it works, and that 50t cog at the rear is a saving grace on the climbs.

The Shimano MT200 brakes are pretty good, too. Yes, they require a tool for lever adjustment, but they're a welcome addition at a price where many brands spec the more wooden Tektro models. 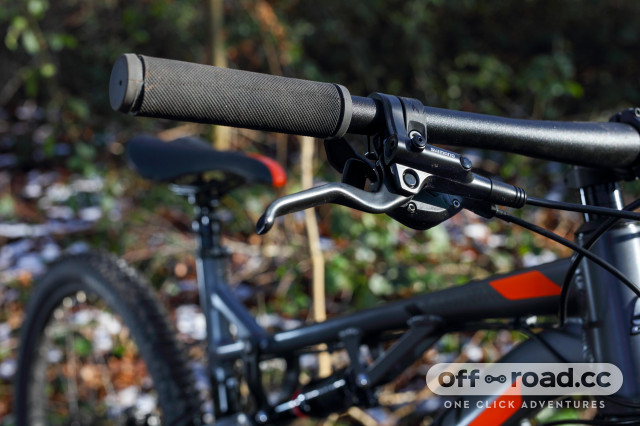 One niggle with them on this bike, though, is that they use a band clamp, and so do the SRAM SX shifters. This means adjustment is limited, and I had to compromise on the position of the shifter to get a comfortable grip on the brakes.

This setup isn’t aided by the slip-on grips either, as they're more difficult to work with than lock-ons. Still, the grips are comfortable and grippy, so there’s not much to complain about on the trails. 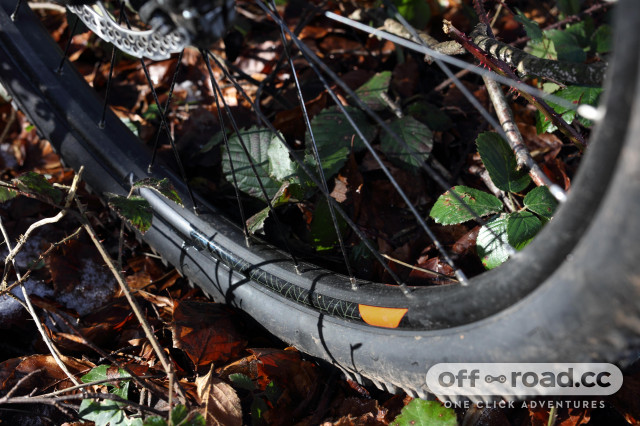 The wheels on the Titan X come from Carrera, and this is where money-saving affects performance. They're noticeably flexy in the corners, and when paired with the rather low-profile tread of the WTB Trail Boss tyres, the bike struggles to hold its line.

However, while the flex can be very clear, the wheelset has stood up to abuse without damage so far.

The tyres fit the bill perfectly if you’re only riding hardpack or dry trails. In the wet and on softer trails they pack up with mud quickly, making for a rather slippery ride in winter. As you’ve saved so much money on the bike, spending a little more on a more aggressive front doesn't seem unreasonable. 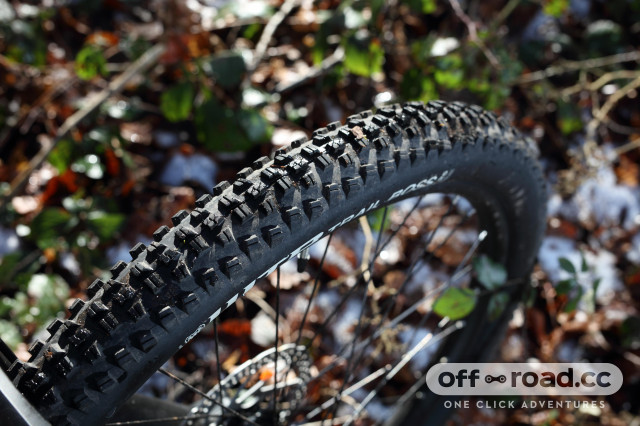 It’s also worth noting that this wheel and tyre combo doesn’t accommodate a tubeless setupm but again, at this price and given everything else on the bike, I'm not surprised.

There are plenty of bikes at this price with similar geometry, such as the Giant Talon 29 1, but that's a hardtail like many other competitors.

As a bike new riders may be eyeing up as their first, the Titan X is great. On flatter trails its short wheelbase makes for an agile ride, and the short reach means it's easy to weight the front wheel in the corners. However, on long sweeping turns it can feel a little nervous, as its relatively steep head angle results in a sensitive front end that makes it tricky to hold a consistent lean angle. 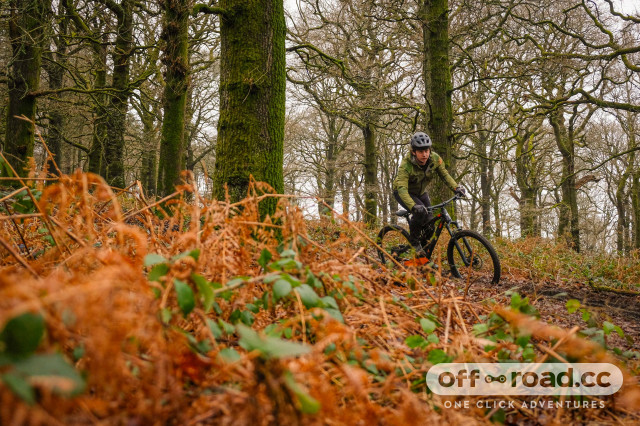 The bike also gets nervous when the gradient steepens, thanks to that short reach and steep head tube. Its tall seat tube also doesn’t aid this. It forces your centre of gravity higher, making it difficult to shift weight over the back wheel and keep weight low. This is especially noticeable over big, consecutive rollers where a low centre of gravity makes for a much happier time.

On the climbs, the opposite happens. 73.5° is a fairly slack seat tube angle and, once the trail points up, it’s easy to feel folded over as you try to shift weight forward. 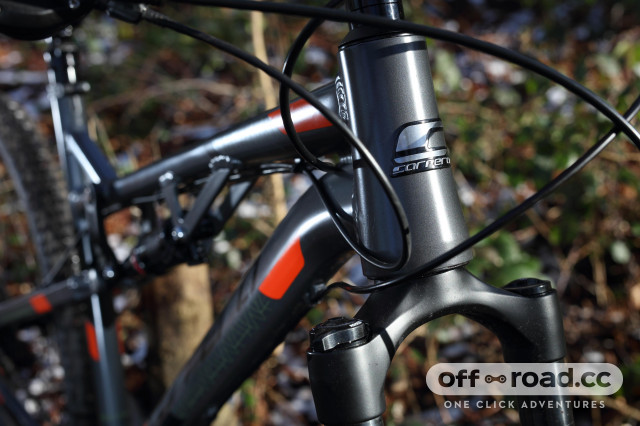 Still, the geometry is welcoming and easy to get on with overall, and it's well prepared to take on much of what the UK's trail centres can offer. It’s quick in the corners too, thanks to its short wheelbase and 650b hoops, and the impressive rear suspension keeps it reasonably composed at speed.

All this instantly makes it a much more capable bike than others in its price range, especially as most are hardtails. However, there are just three sizes of Titan X (from S to L) and they're all fairly short, so tall riders will struggle to find a proper fit.

It’s easy to get lost in grumbles, but overall, it’s undeniably brilliant value for money. There are few full suspension bikes at this price point, and the properly sorted rear end is a massive bonus.

It can only really be compared to bikes such as the £1,100 Boardman MTR 8.6 which comes without a dropper post, or the Rockrider ST 900 S, which is £50 pricier but comes with a lesser spec and even more conservative geometry. 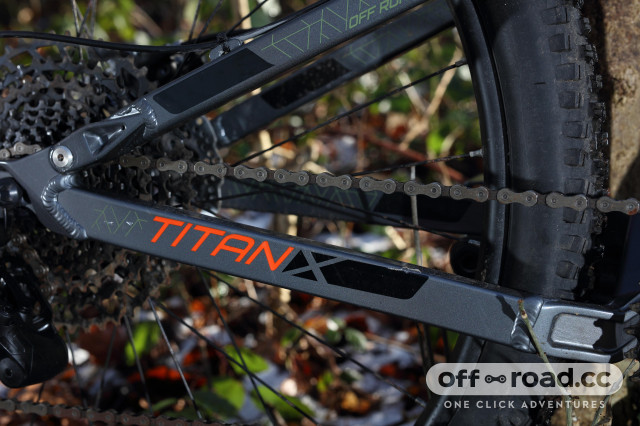 Above all else, the Carrera Titan X offers excellent value for money with its up-to-date kit and excellent rear end. However, its geometry isn’t quite as up to date as its build, and that limits the audience to those looking for a first bike.