Skip to main content
Log In Register
2020 Giant Talon 29 1 review £800.00
Snappy mile-muncher with a respectable fork, but dated wheels and geometry can frustrate 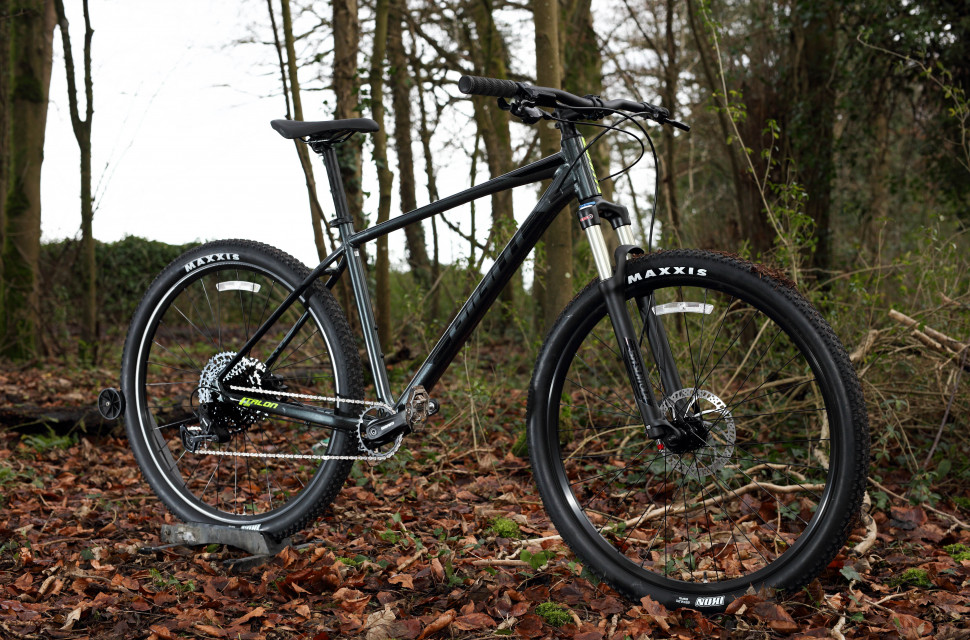 The Talon 29 1 is Giant’s cross countryish, entry-level hardtail that offers a snappy and agile ride at a perfectly budget-friendly price. The spec is good for the money, however the flexy fork and an XC-focused geometry limits the bike to mellower routes.

The 2020 Talon 29 1 here tops the Talon range. It’s built around a good looking alloy frame and gets an SR Suntour Raidon air fork with 100mm of travel. It rolls on 29” wheels and is kitted to cover a bunch of miles quickly, but the whole build weighs in at 13.6kg – perhaps a tad portly for a cross country bike type bike.

While the fork doesn’t have a RockShox or Fox logo stuck on the side, it performs rather well. Most notably the Suntour Raidon is nicely supple at the start of its travel, so it’s much keener to soak up small bumps rather than act purely as a shock absorber, as some cheaper forks can. 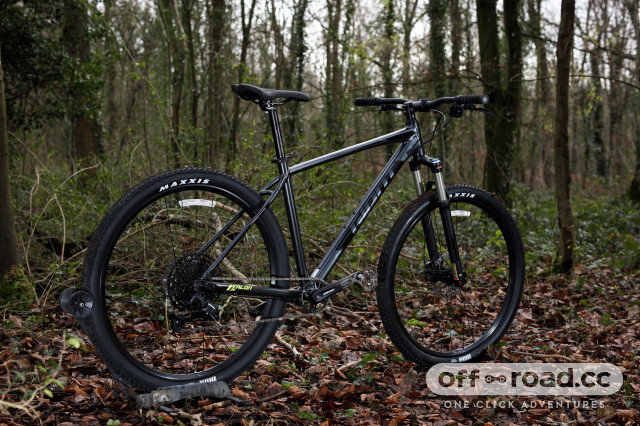 However, it is quite a bendy fork, but it's a happy trade-off for the great damping, especially at this price. It can affect the ride, but we'll get onto that a bit later. 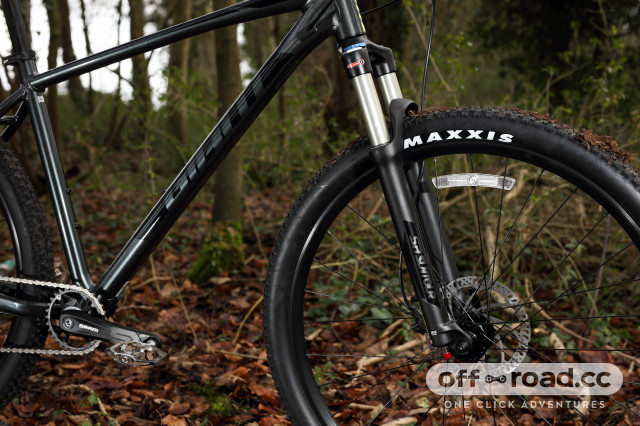 The Raidon gets a rebound dial and a lockout. Unfortunately, on our fork at least, the rebound dial isn't indexed, so you might be in the dark when dialing it in. As long as you aren’t a constant suspension fettler, you’ll get on just fine. 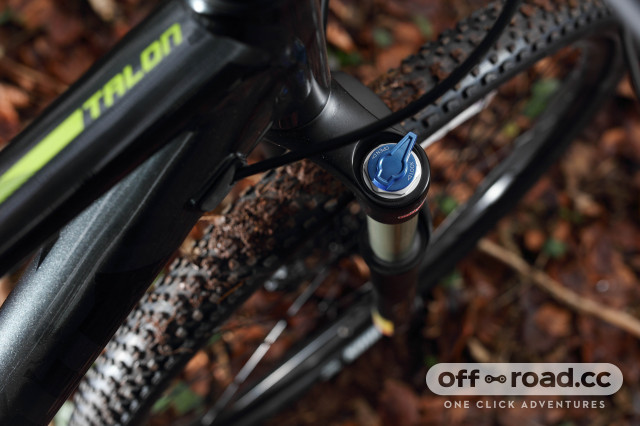 Curiously, Giant specs this bike with a reasonably wide bar yet a lengthy 70mm stem. The pairing makes the ride quite twitchy and sensitive to any input – it wouldn't hurt to have specced a shorter stem here. I reckon around 50mm would be a good shout. 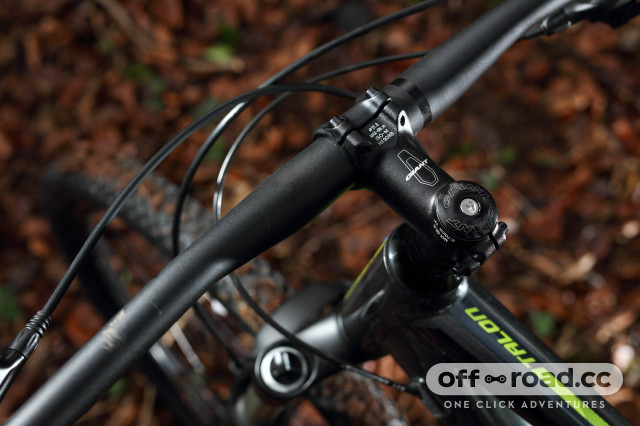 The grips are a bit of a throwback, being simple slip-ons, but they're actually quite nice. They’re reasonably squidgy and grip is more than adequate. Of course, slip-ons are notorious for getting spinny if water finds its way underneath, plus they can also be quite difficult to work with when setting up the cockpit – especially with the band clamp shifter and brakes this bike comes with.

Speaking of the cockpit, this bike is graced with a pair of hydraulic Tektro HDC M275 brakes. They’re basic in terms of adjustment (with a tooled lever-reach adjust) but provide a very usable braking power, and while there’s not a load of modulation, for the money and the intentions of this bike, it’s not something I’m offended by. 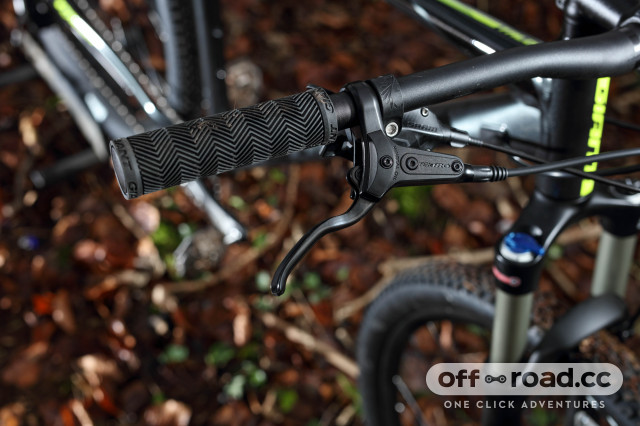 The Talon 1 has a SRAM Eagle SX 12-speed drivetrain paired with a 30t chainring, which is super helpful on the climbs. When the trail opens up though, it's easy to spin out thanks to that small chainring – a few more teeth wouldn’t go amiss. For new riders though, this might well be perfect.

Onto the wheels, and the bike falls short. They come from Giant and the rims have a 21mm internal width, which supports the 2.2” Maxxis Ikons well, though a switch to wider tyres will introduce a bit of lateral roll in the corners. This particular model of the Ikon seems OEM only, too, and has a heavy wire bead.

That bead also means they're not tubeless-ready, but then neither are the wheels, which is a big shame. That means if you would like to ditch the tubes, you're looking at all-new wheels and tyres. 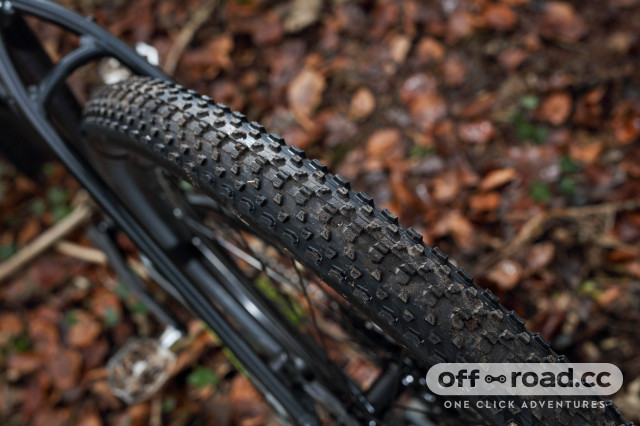 There are also quick-release skewers at both ends that are flexy by themselves, and matched to quite a flexy fork result in fairly indirect steering at speed. The front end can feel vague in the corners.

The quick-release skewers also limit upgrade potential. If you would like to pop a stiffer fork with a thru-axle on the front, you'll have to buy a new wheel or sort out a wheel rebuild. Likewise, if you would like to upgrade the wheels, you'll find your options limited – and you're stuck with a QR at the rear because of the frame. 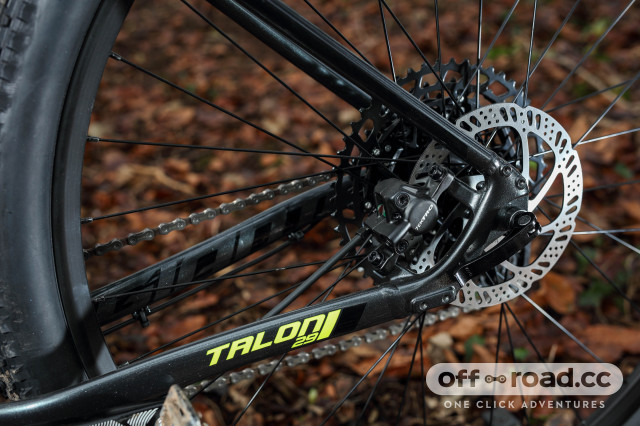 This bike gets a 435mm reach on our size Large, which is pretty short even against similarly-priced XC bikes. To create enough room for you it gets a slack 73.5° seat tube angle. Seated, this (and the long stem) makes the bike feel super stretched-out.

On the climbs, it forces your weight back and makes it difficult to weight the front wheel for steering, while at speed in the attack position it puts a lot of weight over the front. All this leads to a nervous front end, which isn’t helped by the flexy fork and axles. 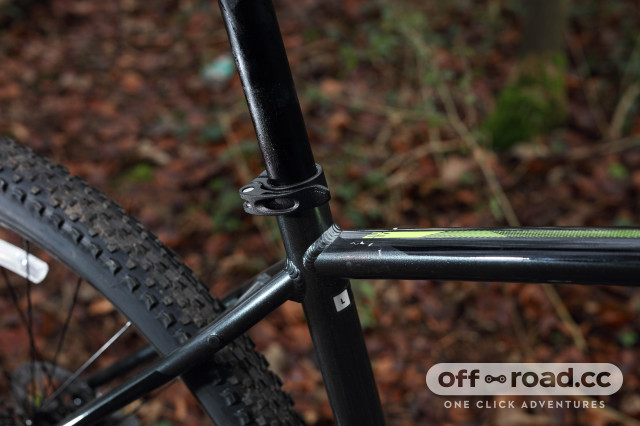 The wide handlebar doesn’t help the cause a lot either. It stretches out the riding position, even more, when seated. When stood on the pedals, however, it gives extra leverage for leaning the bike, but with that lengthy stem you have to be gentle with your steering inputs. 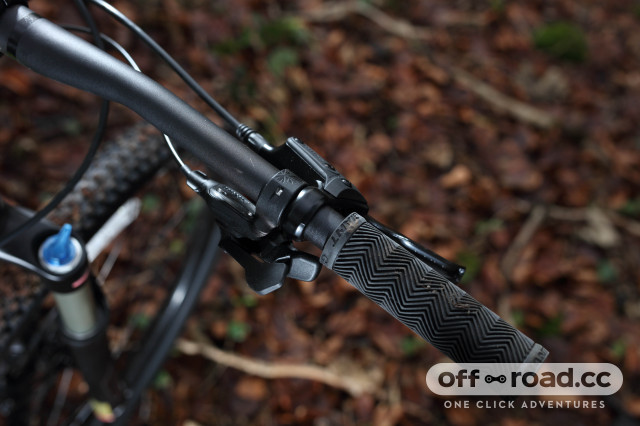 What this bike does excel at, however, is covering ground. Those super low-profile Maxxis Ikon tyres make the most of every pedal stroke, bringing the bike up to speed with little effort while hiding the bike's extra grams. I found myself storming up climbs, flying past folk on full sussers, and improving my Strava times.

Those tyres do keep you on your toes in more challenging terrain, but it adds a bit of spice adding to an overall spritely ride. That short reach and subsequently short wheelbase make for a bike that’s super keen to corner too, so it’s easy to push into berms and nicely precise while changing direction. 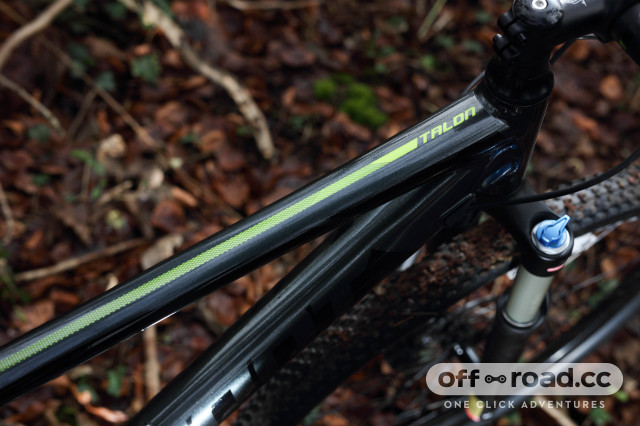 The £800 mark is rife with strong competition. For instance, there’s the Marin Bobcat 5 which has a much more trail-friendly geometry and a stiffer bolt-thru fork, and it's just £25 more expensive.

If you're looking at getting into some more serious off-road riding, another £150 gets you the Rockrider AM100 HT. It's again more trail focused with a bolt-thru fork, but it has a dropper post and some decent rubber from Michelin.

It'll be rude to forget the Carrera Fury too. At just £600, it comes with a 1x drivetrain, a dropper post and the very same fork as this bike – but it's the thru-axle version.

What's more, each of these bikes come with tubeless ready wheels and tyres (bar the Fury: only the wheels are ready there). 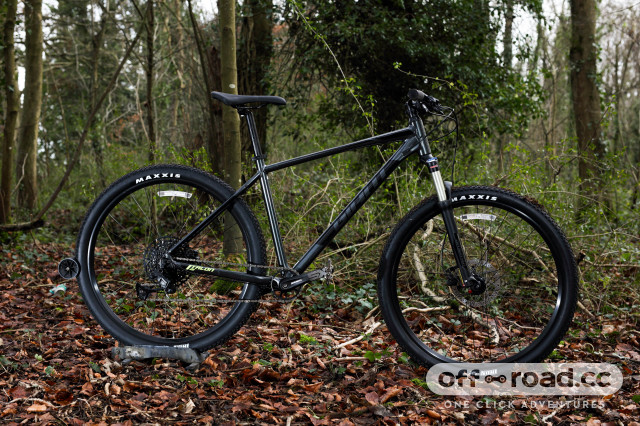 If you’re looking to dabble in off road riding and experience some mellow, well-groomed singletrack, the Giant Talon 1 29 is totally at home. It's fast, engaging and keeps you on your toes from time to time. However, it’s a shame the wheels aren’t tubeless-ready and it would be a real pleasure to see a bolt-thru fork – this is not the bike for anyone planning to slowly upgrade.