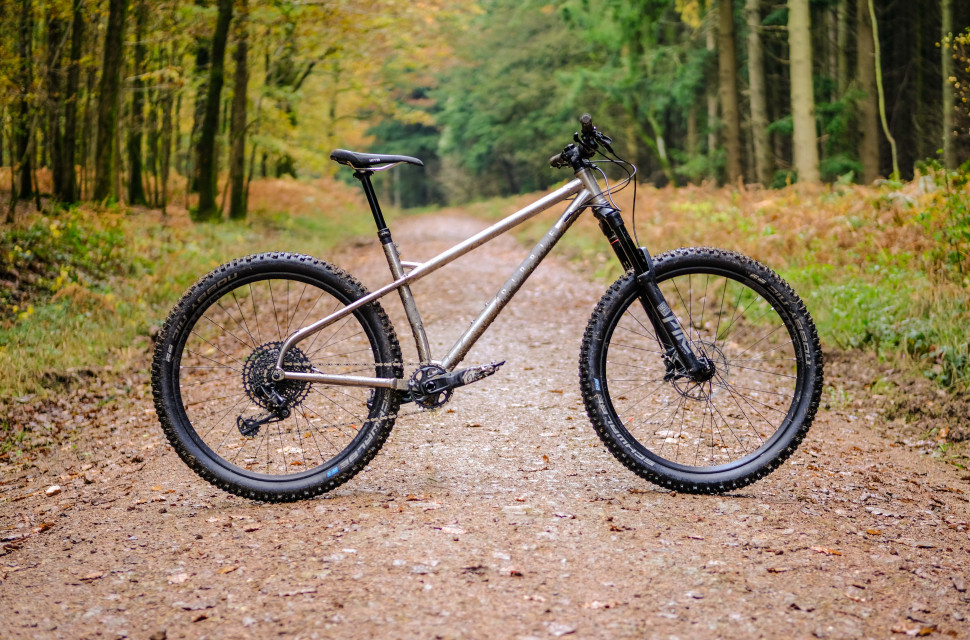 The Ribble HT Ti is a thing of beauty, but this titianium hardtail isn’t just about looks – it's got substance, thanks to progressive geometry that puts it firmly in the ‘enduro’ camp. A few spec choices seem at odds with the build and there's a steel version that makes this one look pricey, but if you're a sucker for titanium and hard, fast trails, you’ll want to take this bike for a ride.

As the name implies, the HT Ti is a hardtail made from titanium. The one we have here is the GX Eagle spec, which gives you a 150mm Rockshox Pike Select+ fork, the aforementioned 12 speed drivetrain, SRAM Guide R four piston brakes, Hope Fortus 27.5” Boost wheels, Schwalbe Nobby Nic 2.6” tyres, a RaceFace cockpit and Ribble’s own-brand Level 150mm dropper post.

Minus pedals the bike comes in at 12.82kg (28.2 lbs) which isn’t light, but it’s a solid build and not meant for weight weenies.

At £3200 the price tag is pretty heavy too, though the GX Eagle sits in the middle of the range. The NX Eagle-specced bike with Revelation fork is £2700, while the XX1 Eagle with Fox 34 Float Factory fork is £5000. Alternatively, you can go frame-only for £1800, though check your fork has lots of steerer left as the headtube is pretty low (I ended up running three spacers below the stem). 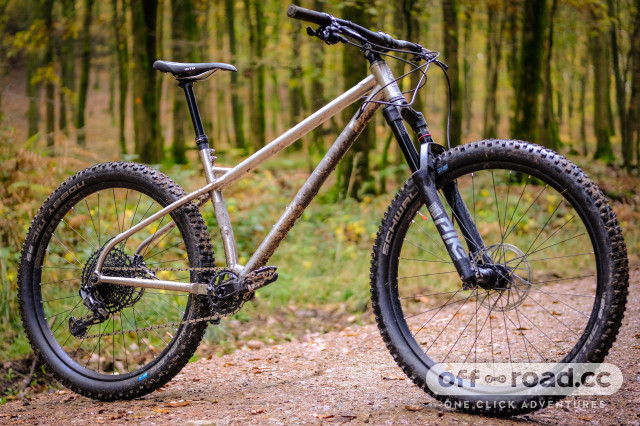 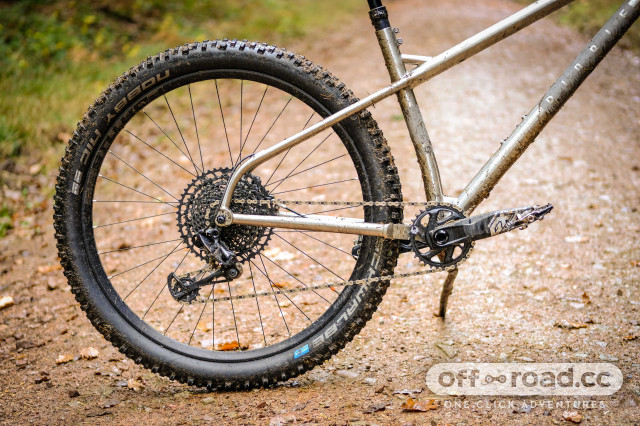 There's a neat CNC-machined bridge bearing the Ribble logo – and echoing the head badge – lodged between the seat stays, and a sleek, integrated two-bolt seat clamp. 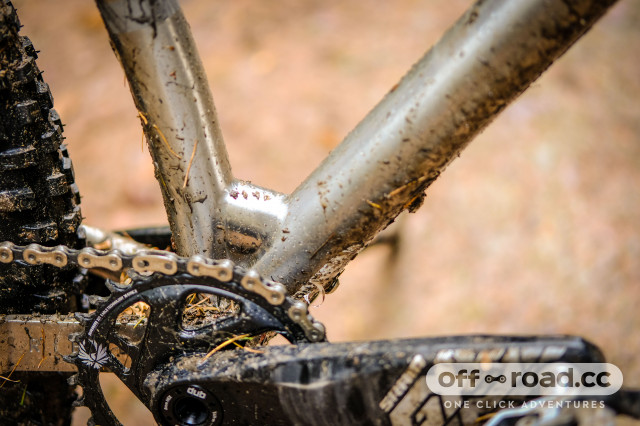 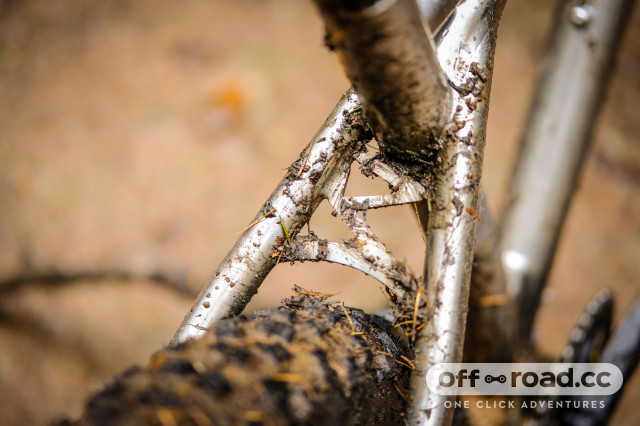 Down near the bottom bracket is a small brace, which allows full internal cable routing for the dropper. Elsewhere cables enter the downtube and exit from inside the chainstay / seat tube, leaving most of that premium tubing looking beautifully clean and simple. 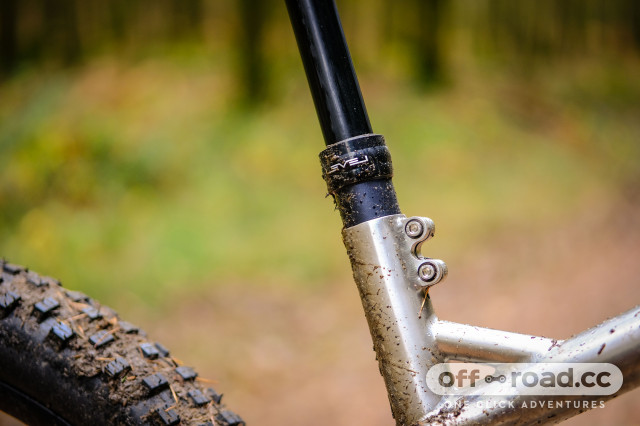 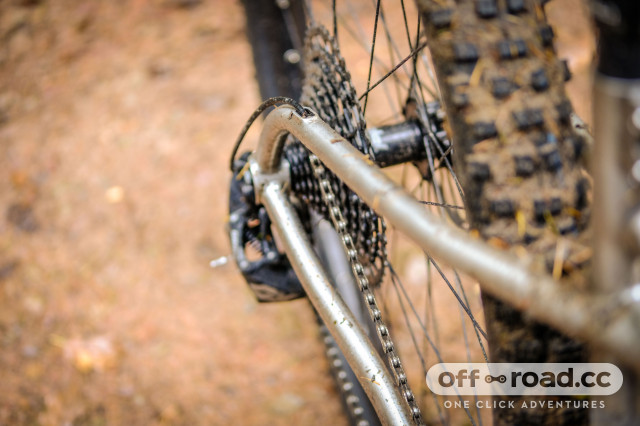 The geometry is aggressive, making this very much an all-mountain hardtail. With 150mm of travel up front the bike has a 64° head angle and a 74° effective seat tube angle (these are unsagged figures, so both get steeper once you sit on the bike).

The chainstays are on the shorter side at 430mm, although on this medium frame I still felt pretty well balanced fore and aft, and the bike's a good length overall. I measured the wheelbase as 1201mm, rather than the 1187mm claimed in the geometry chart, and it actually suits it well. 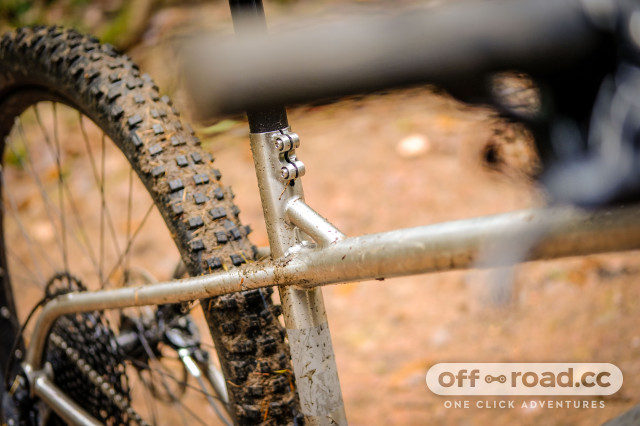 The reach of this medium is a roomy 455mm, which fits me down to the ground and gives a very stable stance. Sit down and the effective top tube (630mm) is noticeably long, however, leaving me mildy stretched out on climbs. A steeper seat angle would fix this by bringing the saddle closer to the bars, but that could put too much weight on riders' hands on flat ground – something I suspect Ribble was trying to avoid.

The medium frame gets a 405mm seat tube with only a small bend next to the bottom bracket, leaving lots of room for long dropper posts. Check the geometry chart before sizing up or down, though, as the differences mount up: the seat tube on the large is tall at 457mm, and the effective top tube is longer still at 650mm. 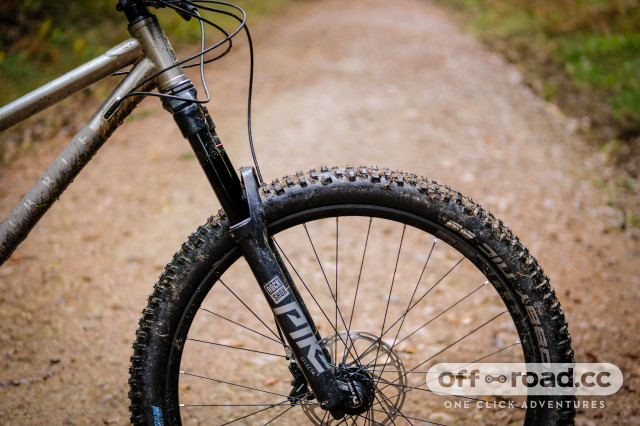 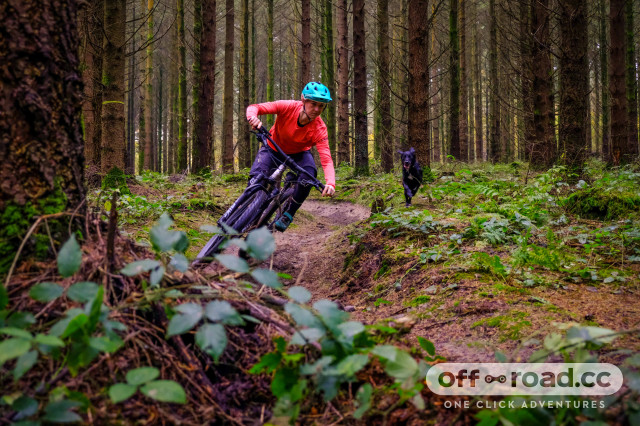 The ride quality boost you get from this compliant titanium frame over an alloy hardtail – and the weight drop over a steel one – is well worth the spend. It takes the rough edge and rattle off what otherwise can be a harsh ride, and it doesn’t lose out in terms of efficiency either. 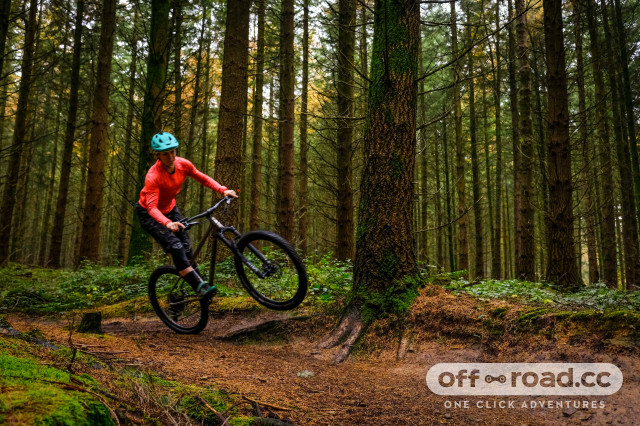 This compliance, combined with a top-end trail fork in the Rockshox Pike Select + (the Charger 2.1 damper brings low-speed compression adjustment as well as rebound) makes the Ribble a capable ride whatever terrain you take it down.

I added one volume reducer to the fork and found it supple, supportive and totally suited to the frame. It’s a bike that's happily hustled on the steeps as well as railing smoother terrain. It's well-balanced, and on more than one occasion I dug in my heels and let go, confident of emerging from long rough descents unscathed. Well, unscathed in hardtail terms, that is... meaning it’s often a rough and 'exciting' ride, but fun! 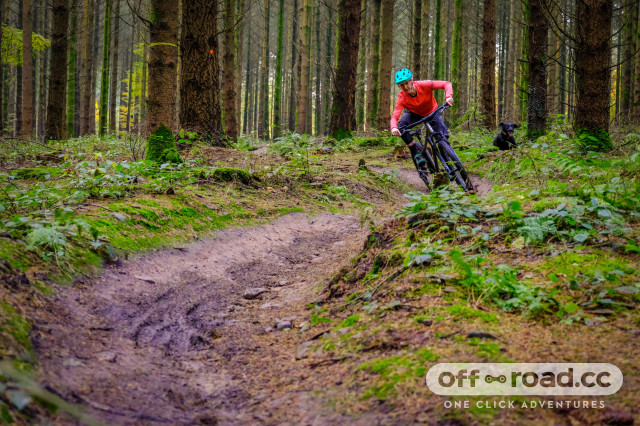 In this spec the bike isn’t bad value. I would like to see better brakes though: the Guide R’s, although four-piston, are underpowered and easily overwhelmed. Something like Guide RE’s would be a better fit, as they're more powerful and similarly priced (if a tad heavier).

I’d also like to see some more aggressive tyres. I'm not a massive fan of the Nobby Nic, and while this relatively new version is fine on the back of the HT Ti in dry to mildly moist conditions, as soon as it gets wet it’s a bit of a wild ride. It lacks bite. It’s the same story up front, although in a much more fear-inducing way... of the Schwalbe range I’d rather see a Magic Mary fitted to the front wheel to improve grip in greasy, wet going. 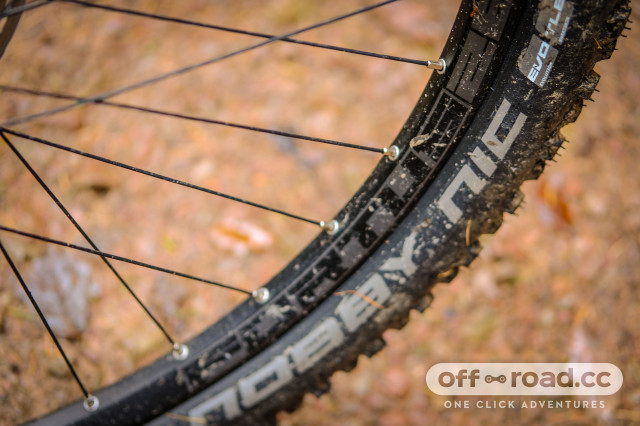 My final gripe is with Ribble's own-brand Level dropper seat post. I had two during this test and both broke (neither would return), with the second post scoring the front of its own stanchion, indicating something seriously mechanical awry inside. Ribble has a few options should this happen, with the best being to send you a new post and refund the labour charge from you local bike shop. Very reasonable, though wasted if the replacement fails as well. 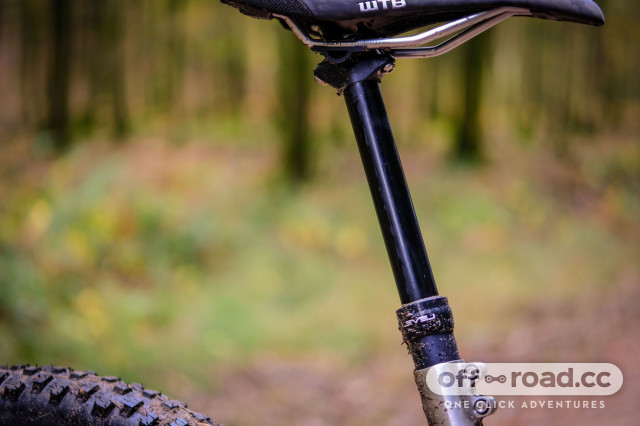 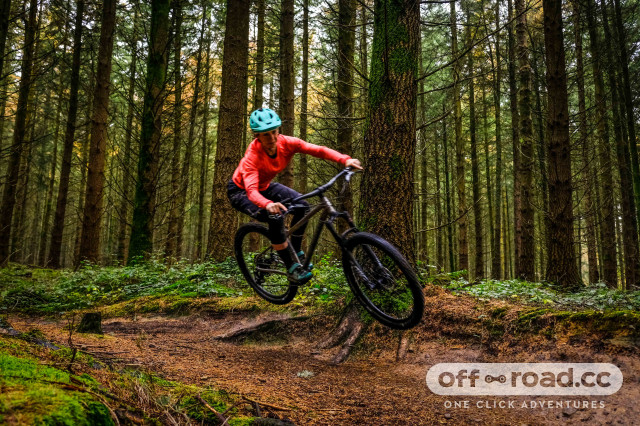 This is an ace bike which ticks a lot of boxes. It looks great, the geometry is confidence-inspiring and it’s a super fun ride. The titanium really does takes the sting out of the proverbial (and literal) tail, and it's lively; the HT Ti is apt at hopping and popping from line to line.

If you're hankering after a genuinely premium hardtail and are happy to spend more on a couple of upgrades despite the high initial cost, the Ribble HT Ti – while not without hard-coded niggles such as the short rear end, long top tube and low front – is a top-notch example for fun times on steeper, gnarlier terrain.

Thanks for cool review! At 6ft what size you'd recommend to go for please?