Skip to main content
Log In Register
Carrera Fury 2020 review £600.00
The Carrera Fury offers stunning value with superbly sorted kit. The frame is bit tall, but for most riders, this is all the bike you'll need

Carrera's Fury offers such amazing value for a £600 mountain bike that it's fair to wonder how they make any money on them, with the 10-speed single ring drivetrain, air-sprung fork with through-axle and dropper post fitted usually only being seen on substantially more expensive machines. The only flaw is the tall seat tube relative to the reach.

The bike is built around an aluminium frame that gets a rather nice matte finish and subtly profiled tubing, rolling on 650b wheels and sporting a 120mm fork at the front. It's a good combination for a fun trail hardtail, with the smaller wheels keeping the handling lively and engaging while there's sufficient fork travel to offer plenty of comforting cushion when the trail gets rough.

The fork itself is an SR Suntour Raidon LO-R, which has a couple of features that make it an impressive bit of kit to have on a bike at this price. The first is the fact that it's air rather than coil sprung, unlike most others at this money. That means it's lighter but is also much easier to adjust to suit your weight for maximum performance;  to do that with a coil fork you'd have to take it apart and buy a new spring, a faff most never bother with. 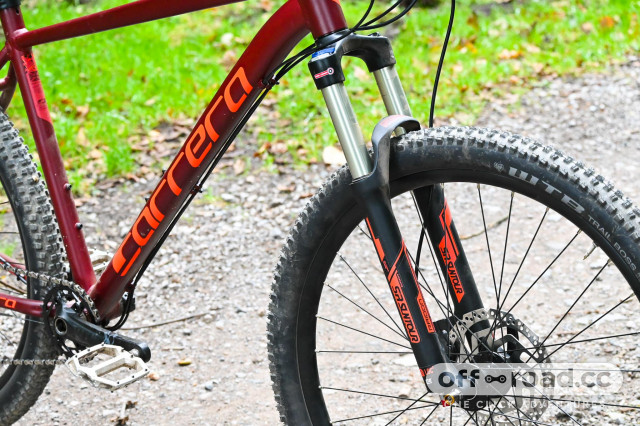 Secondly, the fork has a 15mm through-axle and matching front hub. Compared to open quick-release dropouts, it's much stiffer and more secure, which pays huge dividends in steering precision and for the overall handling. Getting the front wheel out is barely any slower either, though Suntour's system does take a little bit of getting used to. 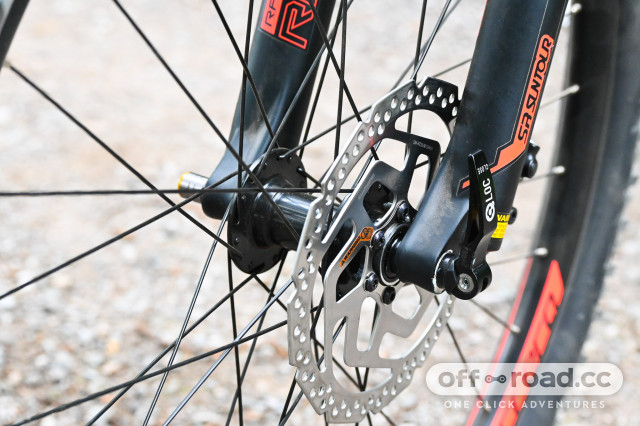 It's also a pretty competent unit on the trail; it's not as supple over the small stuff as higher-end forks but the damping - with adjustable rebound - is well controlled and it does a good job of maintaining traction and cushioning you from the worst of what's going on at the ground. Like most budget forks, it's pretty much impossible to extract the full travel, but that at least means there's decent support on big compressions. 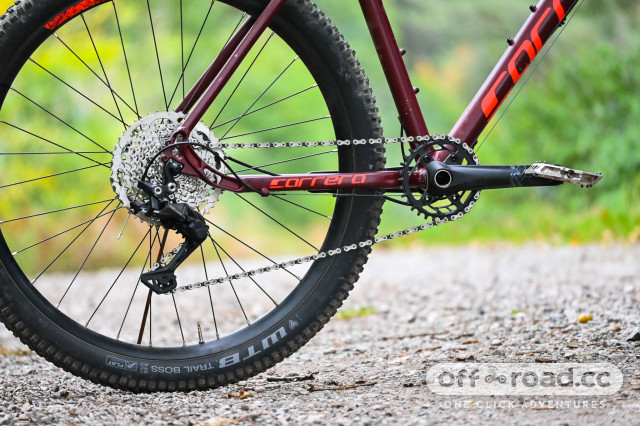 The impressive kit continues with the drivetrain. There's a spread of 10 gears at the back with a Shimano Deore shifter and clutch-equipped anti-chain drop mech and a Sunrace 11-46T cassette giving plenty of gear range. 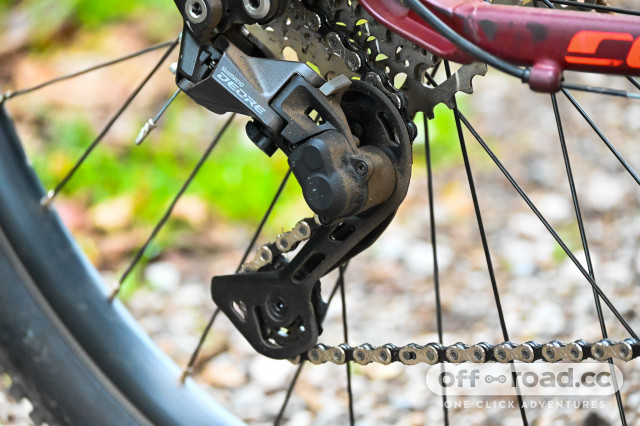 The fact it's there's only a single shifter to worry about is a huge bonus for novice riders too. It's also great to see that the single-ring chainset uses an outboard bearing design for the bottom bracket, rather than the weaker and heavier square taper setups you usually find. 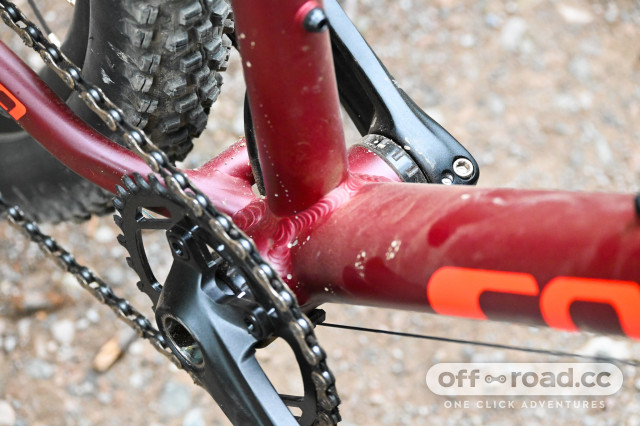 However, there's one particularly glaring error in the fact that the rear gear cable run has a split outer casing; it's much easier for dirt to get inside and mess up the smooth running of the gears compared to an unbroken length of outer casing. It's possible to remedy that if you don't mind taking a file or drill to the cable stops on the frame, but it's a bit of an oversight on a UK designed bike - mud and water are a year-round feature of riding. 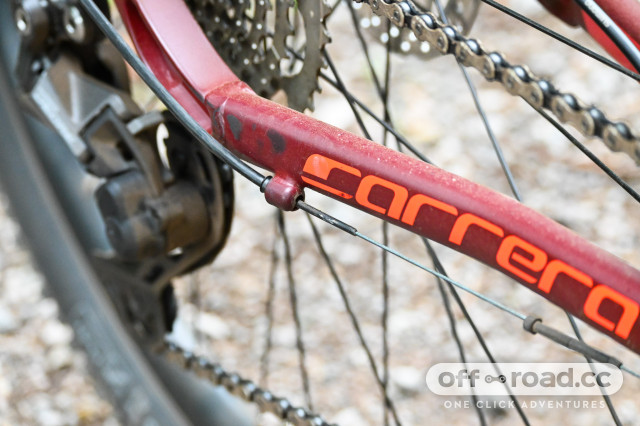 On a more positive note, it's really great to have a dropper post fitted as standard. Being able to get the saddle out of the way with the press of a bar-mounted button really helps improve control and flow on undulating trails and not having to faff with manually adjusting the post at the top and bottom of every descent is a huge bonus. It's only got 125mm of travel but it's a decent unit with a well-shaped remote that we've seen on much, much more expensive machines. 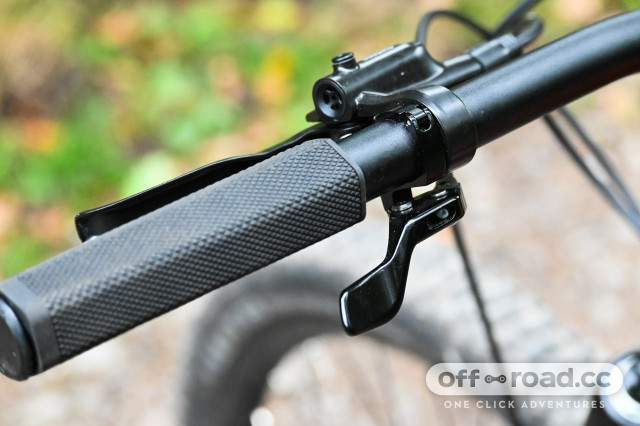 It's also great to see a modern cockpit setup, with a 45mm long stem paired with a 760mm low rise handlebar that gives a direct response and positive control. The absolutely rancid and uncomfortable angular shaped non-lock on grips should be thrown in the bin and replaced with some conventional round ones as soon as possible, however. 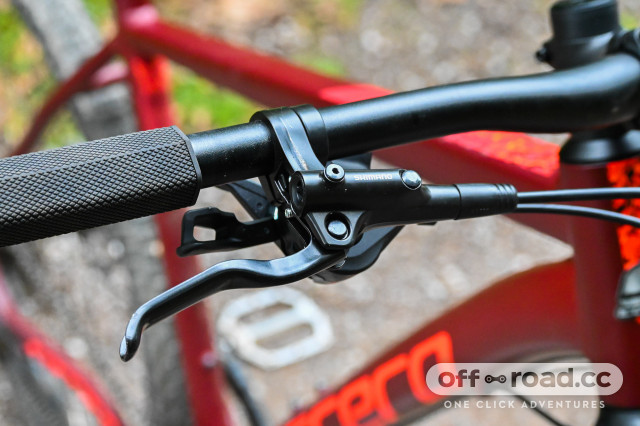 Shimano provides the brakes, with the non-series hydraulic discs offering good power thanks to a 180mm rotor up at the front and 160mm at the back. The feel is good through the levers too, though as ever with budget Shimano kit, the blade itself is massive and can make juggling the brake lever and shifter position around a bit of a faff at initial setup time. 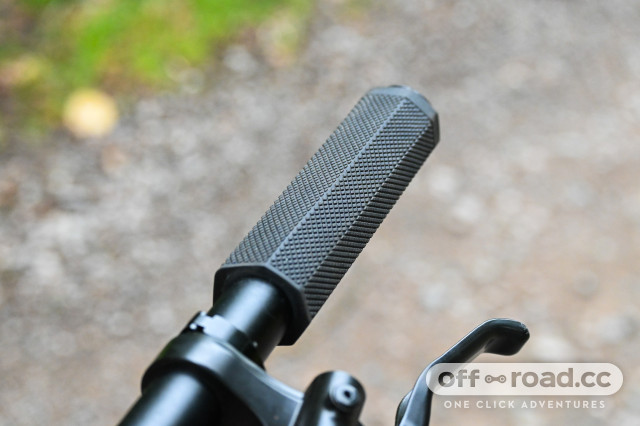 It's also nice to see the own-brand wheels shod with WTB's Trail boss tyres in a 2.3" size. They're not tubeless-ready but compared to the usual low-traction plasticky compound rubber you see at this price, they're a welcome addition, with low rolling resistance and decent traction. They're great for hard pack trail centres but if you ride in the mud regularly, you might want to switch to something a little more aggressive at the front. 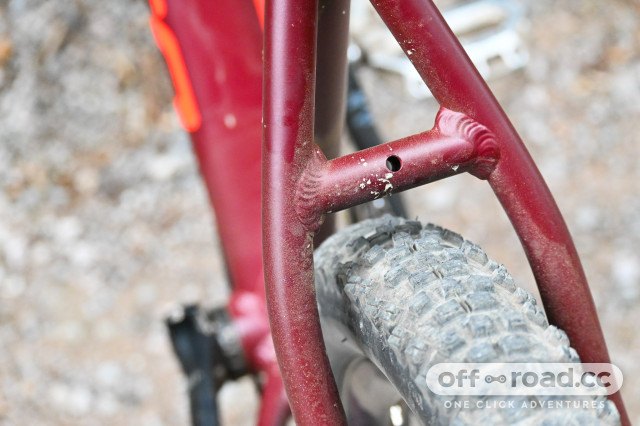 While there's no arguing with the absolutely stunning value on show here, the geometry is arguably a little behind the curve of the very best bikes at this money. A head angle of 67° and a seat angle of 73° are pretty standard, even though I'd prefer the former to be slacker and the latter steeper to really extract all the climbing and descending performance. 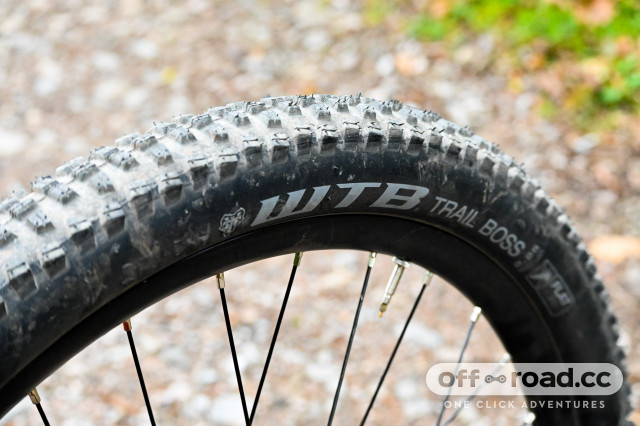 The reach of 460mm for the large-sized frame I rode isn't bad either, but the issue is that the bike has a very long seat tube for this size, measuring in at 510mm. That, along with the extra stack created by the dropper post and the really rather huge own-brand saddle, means the bike is very tall, even with the post dropped as low as it'll go. 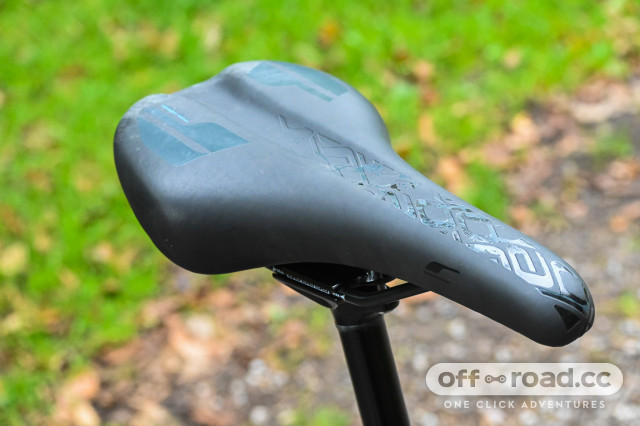 On steep descents - admittedly ones more technical than what's usually perceived as suitable for a £600 bike - it's really hard to get over the back of the bike, hampering control and pushing your weight too far over the front. If like me, you like to size up to get a longer reach for extra stability, it means your options are rather limited here.

It's not a huge issue if you don't intend on throwing yourself down some steep trails, but given how well sorted the rest of the bike is, it seems like a bit of a missed opportunity for a bike that not just delivered value but also a super capable ride. 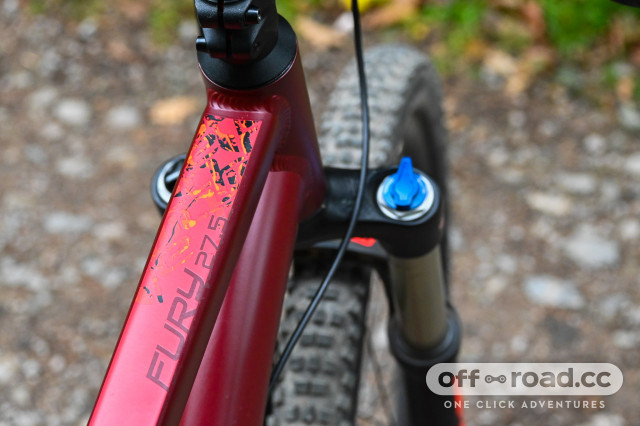 Keep the bike to more sensible terrain and it's excellent fun, with the well-sorted kit allowing you to focus on your riding, rather than being filled with fear about plasticky tyres or a twangy fork trying to kill you. The impressively low weight of 14.2kg means that it'll skip along the flat or up climbs quite merrily, though you'll need to perch forward to keep the front end down. 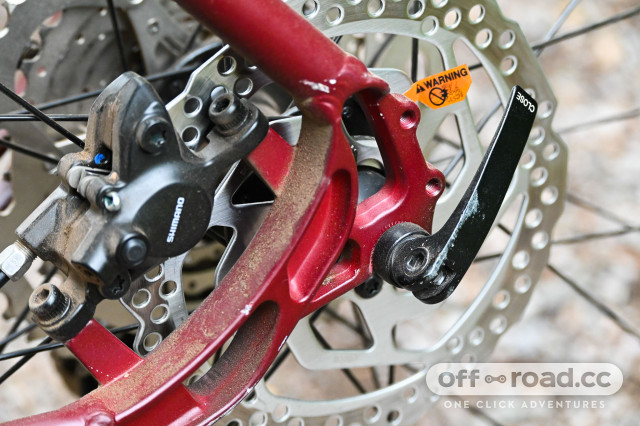 All in all, it's hard to fault the Carrera Fury. It's absolutely stunning value and all the kit is frankly exceptional for the cash. It's not quite perfect - the overly tall frame being the biggest issue - but it still knocks the socks off most of its competition at this price, with the air fork and dropper post being particular highlights.

Hmm, Calibre have got a challenger to the crown, particularly as their prices have gone up recently. I think I'd probably skip this due to the long seat tube and exposed gear inner but it's cracking value for a first "proper" MTB.