Skip to main content
Log In Register
Marin Bobcat Trail 3 2020 review £525.00
Capable geometry and cool looks deliver a proper trail bike for beginners or those on a budget 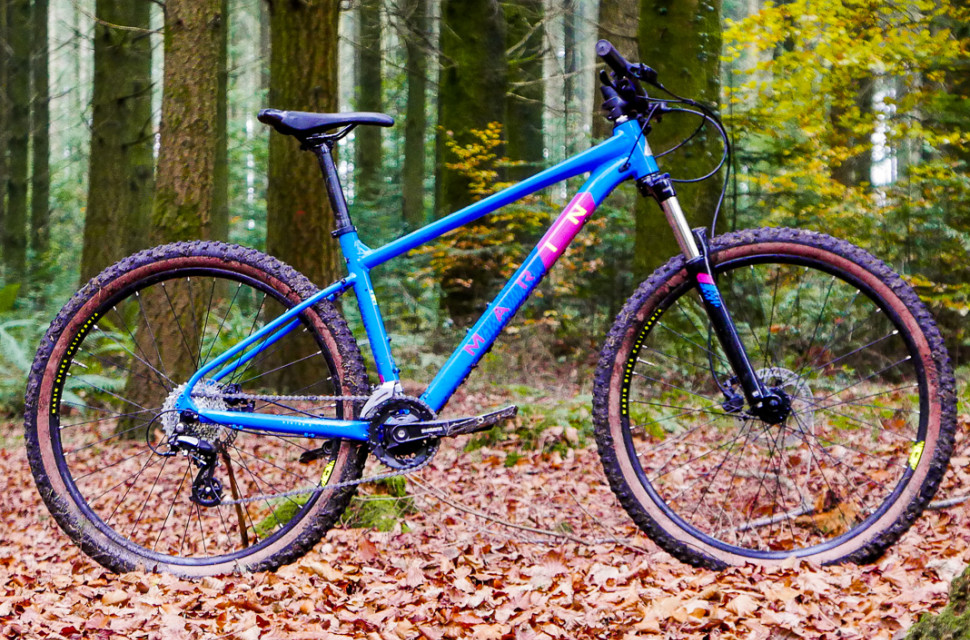 Marin's Bobcat Trail 3 manages to both look and ride like a much more expensive bike than it is, with a quality frame and geometry that comes from the 'proper trail bike' book to deliver a really capable ride. Compromises in the drivetrain and suspension to get it on budget are apparent, but it's still a solid machine that delivers a lot of fun for not much cash.

Marin's mountain bike range has been undergoing a bit of a renaissance in recent years, with a thorough revamp of styling and geometry all across the range. The Bobcat Trail range is arguably the start of their 'proper' mountain bike lineup - the cheaper Bolinas Ridge bikes notwithstanding - and all the bikes share the same aluminium frame with 120mm of travel up at the front paired to 650b wheels on smaller sizes and 29" hoops on the bigger bikes.

The Bobcat Trail 3 is the most basic bike in the range but, like the others, the frame is well made and featured, with sleek internal cable routing, nicely finished welds and the ability to eventually upgrade to a tapered steerer fork thanks to a 44mm headtube, though all the bikes come with straight steerers. At the back, it's still built around a quick-release 135mm hub rather than a stiffer and more secure through-axle design, but at this money, it's par for the course. 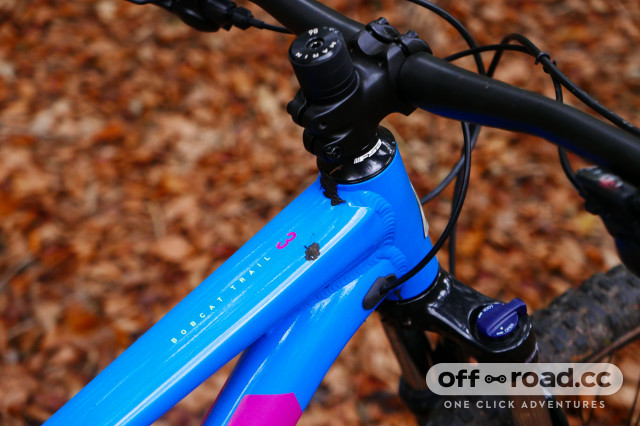 Where the Bobcat Trail really stands out against the crowd is in the geometry. For a start, offering 120mm travel at the front gives it an edge over rivals that mostly make do with 100mm, but that's backed up with a frame shape that does it's best to encourage you to push harder and find the limits of bike and rider rather than trying to kill you because you wanted to ride something that wasn't flat. 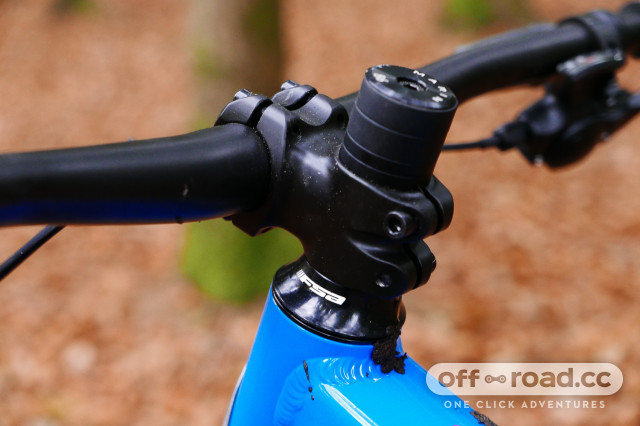 At soon as you're sat on the bike, it instantly feels like a serious trail machine, with the slack-for-this-kind-of-thing 67.5° head angle and broad 780mm wide bars on a stumpy 45mm stem letting you know it means business. Compared to many bikes at this money, where it can often feel like the factory accidentally used their road bike geometry when sticking to together, it's a night and day difference.

The large bike I tested has a reach of 465mm, which is up there with most full-on enduro bikes. That means there's plenty of room to shift your weight about without unsettling the bike and it's really well composed, even on steep trails that a £500 bike wouldn't usually call home. It really allows you to maximise the grip from the bike without feeling like you'll get punted off if it starts to go a little bit wrong, which is an excellent thing for riders of all abilities, but especially so if you're just starting out.

The decently steep 74.5° seat angle also shunts you nice and forward so it's easy to maintain traction when you're climbing and the 311mm bottom bracket doesn't feel precarious either. It's also good to see that the 30.9mm seat tube is ready for a dropper post to drop in whenever you're ready to upgrade.

Once you start heading down the trail, the fact it's been put together on a limited budget does become slightly more apparent. The SR Suntour XCM HLO might claim 120mm of bounce but I suspect very, very bad things would need to happen to get it to compress that much and the open dropouts and skinny legs mean noone will be accusing it of being precise in a hurry. 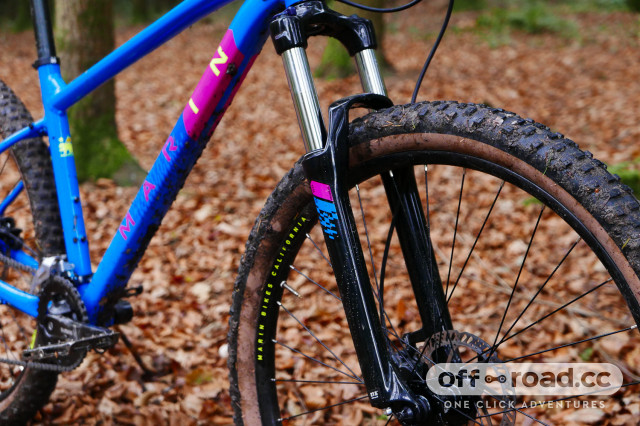 That's unsurprising on a budget machine, though the coil rather than air spring does mean it's much harder to correctly tune the fork to ride weight in the first place. The non-adjustable damping doesn't present too much in the way of unwelcome surprises once you hit rougher ground but don't expect much control on big successive hits and you won't be disappointed. 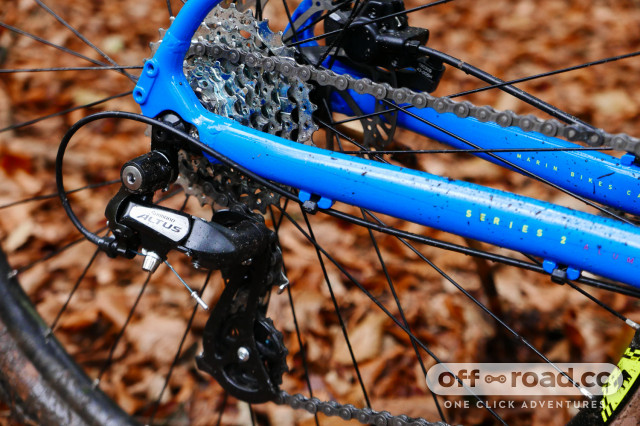 The eight-speed Shimano Altus drivetrain is a bit of a shock to the system if you're used to modern single-ring setups with clutch equipped mechs. While having a 11-34T cassette and a double chainset with 36/22T rings does mean there's theoretically plenty of range, you do need to scrabble up and down the block and rings to access it. That means a lot of clunking and clanking unless you time your shifts and predict the ratios well in advance. 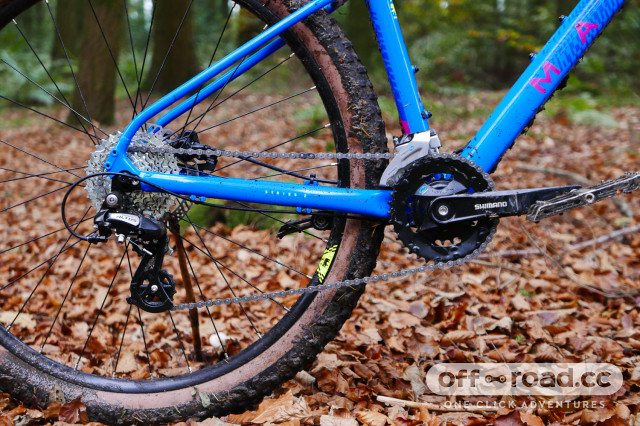 Interestingly, I found this was what marred the riding experience the most when riding natural, mildly technical trails as all the hunting about for the right gear really hinders flowing progress. The top-end £895 Bobcat Trail 5 is the first in the lineup to come with a single ring drivetrain too, which is a shame. 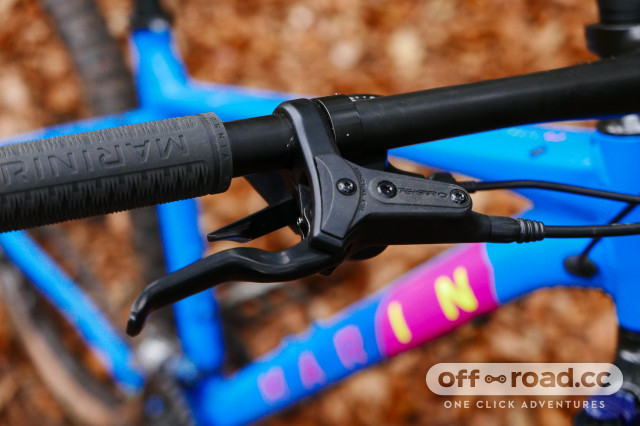 What is nice to see is that the bike gets proper hydraulic disc brakes - it seems cable discs have been deservingly shunted to the scrap heap of history, even on entry-level bikes. Even though they're quite wooden feeling, the Tektro stoppers do a decent job of shedding speed no matter what the weather and although the large lever blade is designed for many fingers to fit on it, you can get away with using just the one pretty much all the time.

Elsewhere, the unbranded tyres provide rather cool looks thanks to a gumwall but not a lot of grip on wet rock and roots due to a rather hard and plasticky compound rubber. They're pretty decent in softer terrain and roll well on hardpack however. 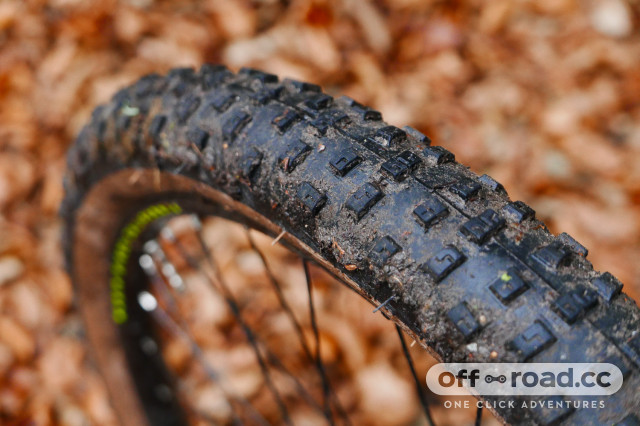 Equally functional and un-flash is the wheelset, which uses no-name hubs on unbranded rims, though they appear to be robust. Neither tyres nor rim claims to be tubeless-ready, but you might stand a chance of getting it all working with some tape, a load of sealant and persistence. If you want to ride proper off-road trails, a tyre upgrade should be fairly high on the menu regardless. 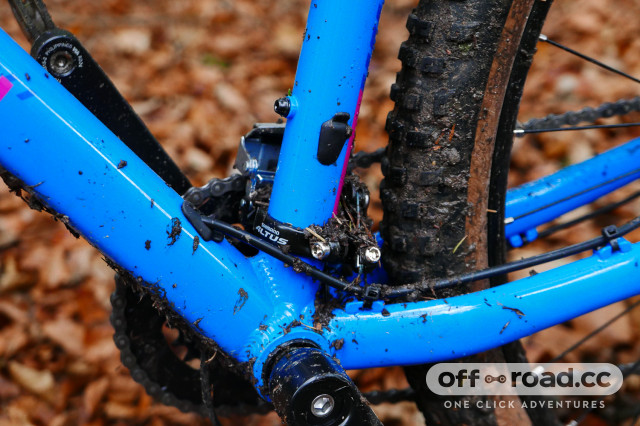 If you're on a tight budget but still have big dreams of ripping around in the dirt, there's an awful lot to like about the Bobcat Trail 3. Yes, it's hampered by the budget drivetrain and tyres and if you're just focused on parts then there are better value options out there, but it delivers a ride that's a disproportionate amount of fun, with proper, trail-ready geometry and genuine capability when you want to let rip.

Thanks to some well thought out details and a solid frame, it's also worth upgrading as you go, in case you can't stretch to one of the more expensive models - though as both the 4 and 5 have better drivetrains, forks and tyres as standard, going in higher is definitely worth considering if you can.