Skip to main content
Log In Register
Boardman MTR 8.9 review £1,750.00
Wallet-friendly ripper that's tough to knock – although the fork has its foibles 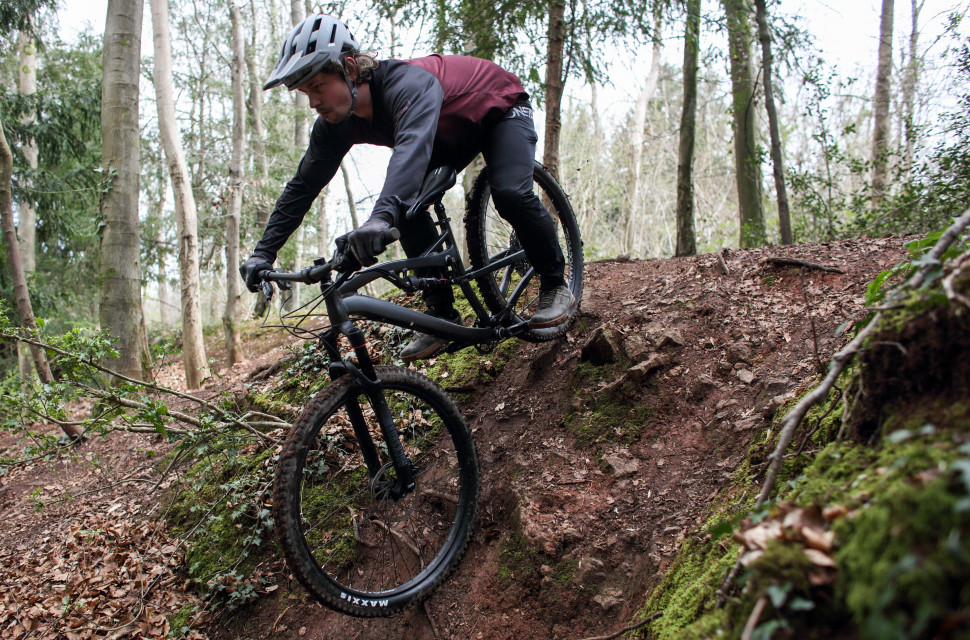 Liam Mercer
|
Jun 10 2021
|
Overall
Quality
Performance
Value
What's good?
What's not?
Buy if...
You're after a solid all-mountain bike on a budget

The MTR 8.9 is Boardman’s trail-ready full suspension rig aimed towards aggressive riding. While the geometry isn’t pushing boundaries and its build isn’t mega blingy, Boardman has hit the nail on the head – it balances a stellar ride with wisely-picked kit. The fork is a point of contention, however.

The MTR has come a long way since we tested its last iteration in 2018. The bike now rolls on 29” hoops and gets a bump in travel, pairing 150mm at the front to 145mm at the rear.

Those aren’t the only changes. It gets a lengthier reach and seriously tweaked geometry to make it an even more capable machine. It also gets a dropper post on all models but the base MTR 8.6. 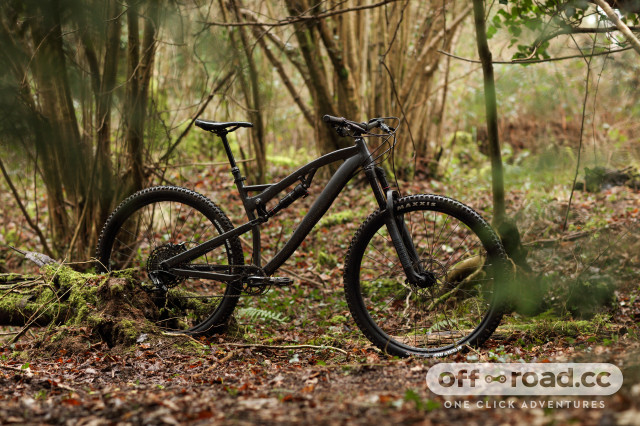 This test bike is the MTR in its 8.9 build, which is one down from the range-topping 9.0 model. 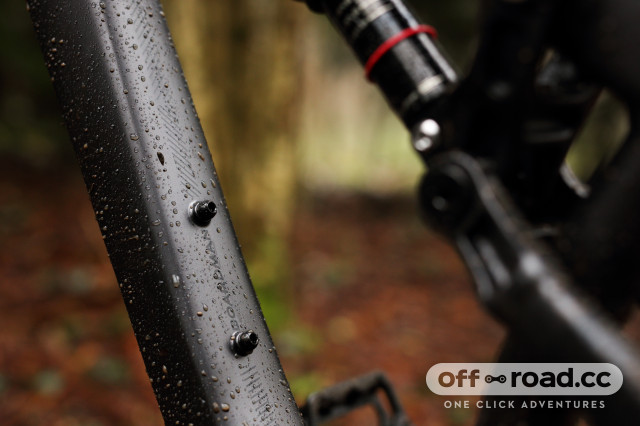 It’s built around Boardman’s X7 triple-butted alloy frame, which has space in the front triangle for a bottle. Cable routing is external, running along the underside of the down tube – the only exception is an entrance for the stealth dropper post at the seat tube. The bottom bracket is press fit. 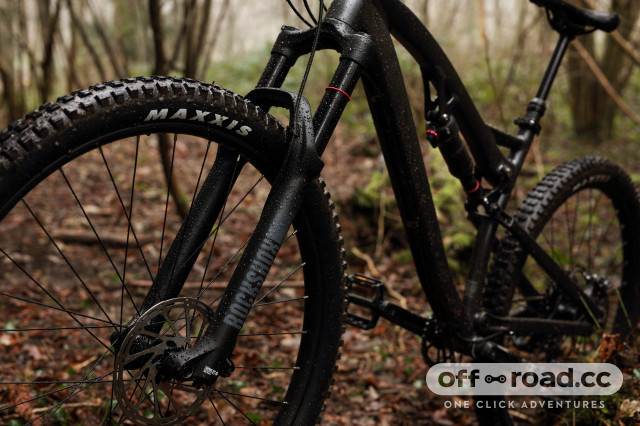 Just like the old MTR, this year’s model gets its suspension delivered by a four-bar platform, and the bounce is managed by a RockShox Deluxe Select+.

As for the rest, the drivetrain is sorted by SRAM with NX Eagle shifting, as are the brakes with its Guide Ts. One really nice touch is that Boardman specs four pot calipers both front and rear, which makes a noticeable difference on the trail. 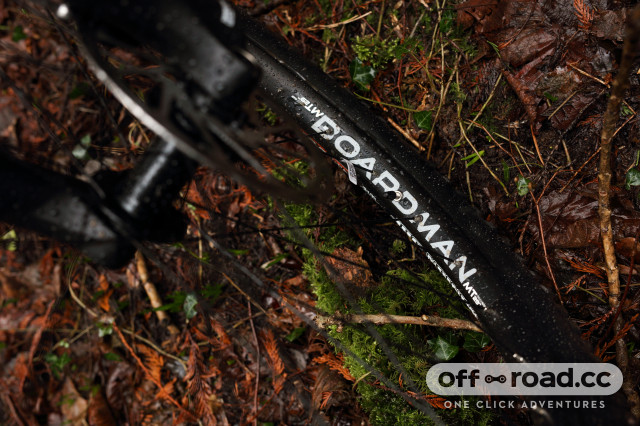 The Boardman Boost 29er Tubeless Ready wheels are wrapped in 2.3" Maxxis Minions – DHF at the front and a DHR II at the rear – both in EXO casings. It would be nice to see fatter rubber, but the combo provides an awful lot of grip even in 2.3" guise.

There's not an awful lot to complain about with the wheels, except perhaps the freehub's pickup response, which is noticeably laggy. 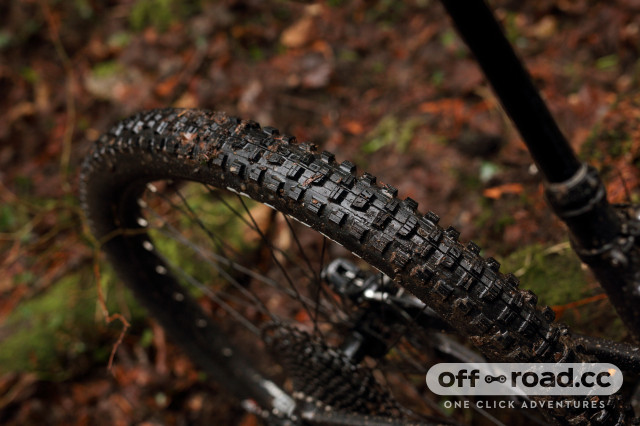 The bike is graced with a nicely modern cockpit, too. There’s a 780mm wide bar with a 45mm stem, both from Boardman. There’s also a Satori Sorata Pro (try saying that three times quickly) dropper post with 150mm (on large and XL frames) of travel. Small and medium frames get 125mm. 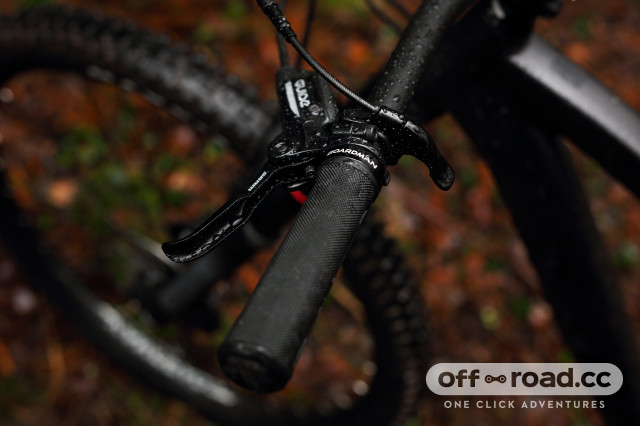 While for the most part the contact points are excellent – especially the saddle – the dropper's lever is destined for the bin.

It follows an old school design from when 2x drivetrains were commonplace and, compared to modern options, it’s not as natural to operate. It’s also very, very slippery, so you need to make damn sure you’ve got your thumb engaged properly or you're left facing an uncomfortable, fumbly catastrophe.

The suspension is interesting on the MTR 8.9. Most of the time, the RockShox 35 Gold RL performs well, soaking up smaller bumps and staying reasonably supportive. However, charge hard over repeated hits and it gets harsh. I found that winding off some rebound damping helps, but it's tough to balance that without getting too springy. 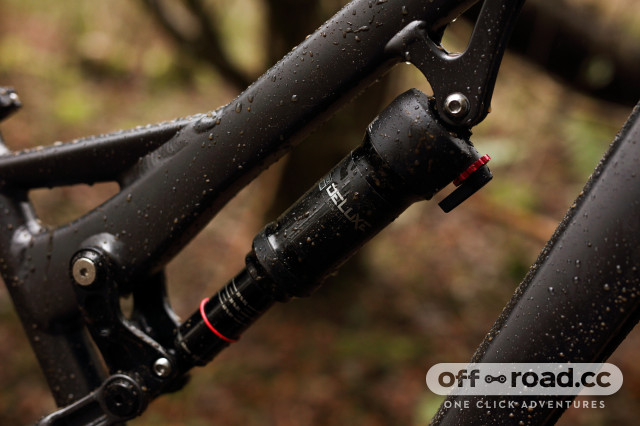 Thanks to that harshness I found myself wincing and holding back on rough sections, in a bid to try and claw back some composure. Thankfully the fork accepts RockShox's bottomless tokens, and one or two should help solve this issue by making it more supple in the initial stroke.

The rear, however, is a different story. To start with I ran the shock at 30% sag but found it a little wallowy in the corners – upping the pressure to 25% sag proved effective. At a bit of an expense to small bump sensitivity, I was rewarded with better support and more playful responses. It still tracks the ground well and deals with big hits nicely, too.

Pumping the rear into the backside of a roller reimburses you with a hefty helping of free speed, and the rear suspension copes with repeated hits with much more composure than the fork.

On the subject of pedaling, the MTR’s 75.5° seat tube angle places rider weight at a really comfortable position over the pedals. Paired with the relative lack of pedal bob (it's not completely lacking) it makes for a keen and comfortable climber that doesn't sap too much energy. 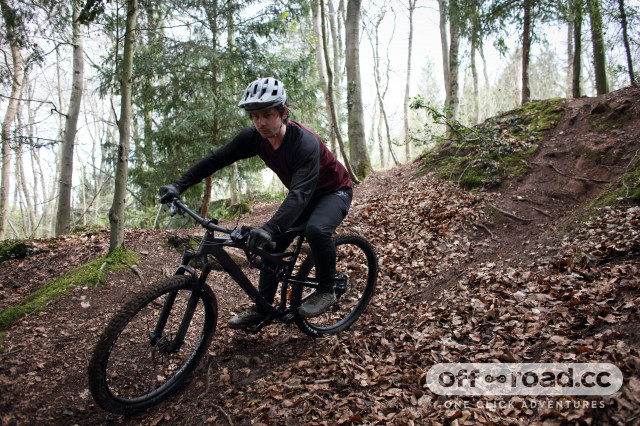 I’ve been able to wrench myself up climbs with surprising speed and comfort, making that one last descent extra appealing. Not that 'one last run' is ever a good idea...

Get out of the saddle and mash on the pedals and the bike's pretty reluctant to get up to speed... at least with 30% sag, anyway. Once firmed up to 25% the MTR – while still giving away a chunk of travel when sprinting – calms down nicely, to the point where it’s not much of a problem at all.

It’s still not the spriteliest of bikes for sprinting, due to its 15.8kg heft, but it holds up fairly well. 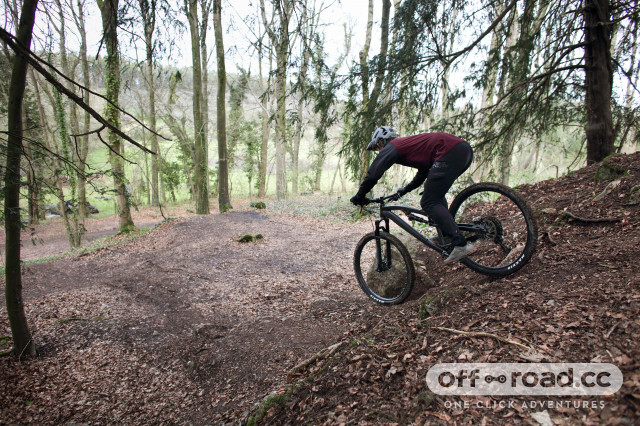 Get the thing pointed downhill and the MTR 8.9 proves really nicely balanced. Its 66° head angle certainly isn’t wild by today's standards, but it’s completely usable and – paired with the 475mm reach– gives a confident ride that can tackle an awful lot.

In fact, there’s not been a time during the test period where I’ve really wished the geometry were different. While it’s a bit over-suspensioned (that's a word now, okay?) for mellower trails, it’s still reasonably agile and impressively well-rounded.

It’s even happier on natural techy trails... until you find the limit of the fork, of course. 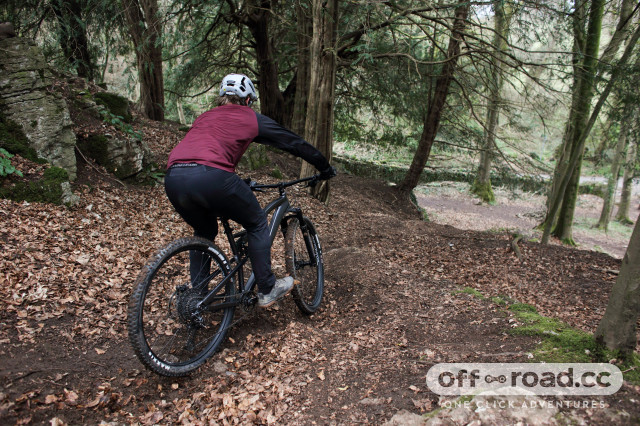 That reach figure offers loads of room to move about, and it puts the front wheel at a good distance in front of you, so when the trail steepens you don’t feel your weight is forced over the front.

This, and the bike's 1225mm wheelbase, results in a nicely stable ride at speed. Meanwhile the 440mm chainstays – they're as short as it gets – helps you swing the back end sharply around corners. 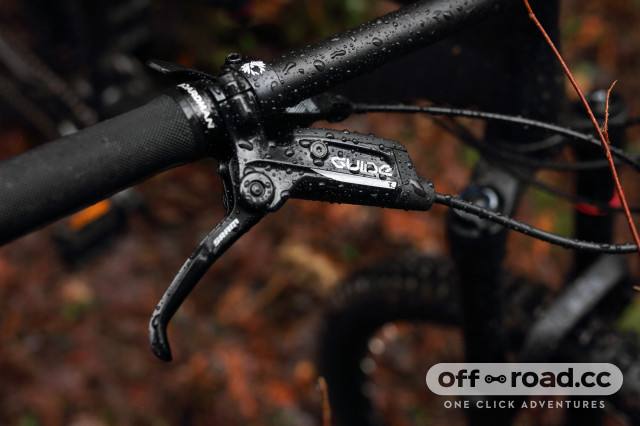 Steep trails are where those four-pot Guide T calipers really come into play. They offer an impressive amount of power, and modulation that lets you creep nervously down steep sections if you need to. When the speed ramps up, it’s a huge confidence boost knowing you’ve got plenty of stopping power at your fingertips – even with 180mm rotors at both ends.

That said, a problem cropped up with mine. A seal somewhere in the rear brake must have given up as it quickly got spongey, and air never stopped finding its way through as I bled the brake. 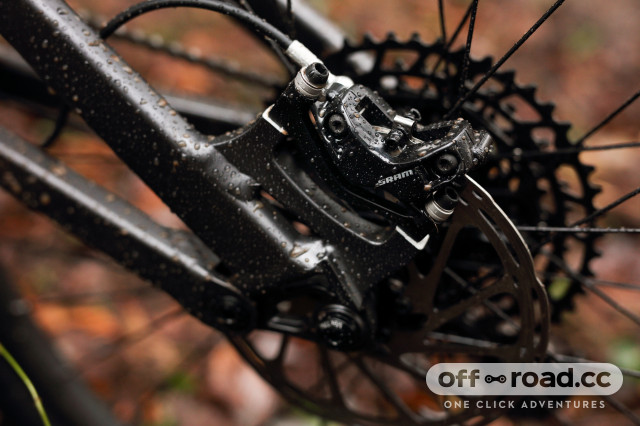 It’s an unfortunate issue, but not one I’ve had on any other SRAM Guide T brakes, so my issue should be a one-off. Boardman says it would be resolved free of charge under warranty if this were to happen to you.

Back to the bike. If I were to really niggle, and I mean really try to find something, I would say the standover is a little lofty. Snaking through successive corners, the MTR feels a little tall between the legs. However, that's nothing a bit of time with the bike doesn't fix. If you have longer legs than I do, this shouldn't be a problem at all.

The sub £2,000 price point is a fierce battleground for a range of full sussers and, like many, the Boardman MTR 8.9 falls prey to the Vitus Mythique. 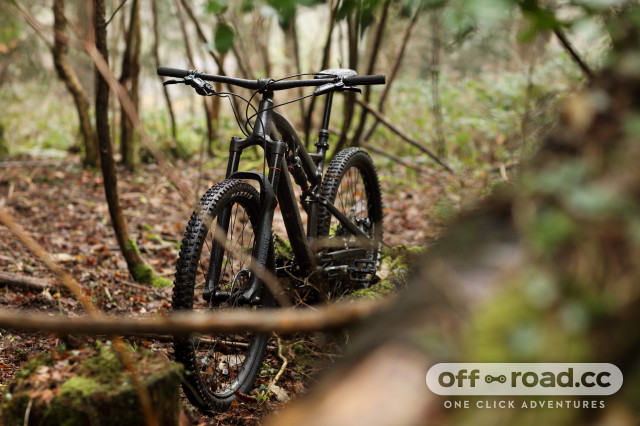 For just £1,600, the Mythique VRX (we reviewed the cheaper Mythique 29 VRS) comes well sorted with a Marzocchi Bomber Z2 fork, WTB i30 rims and a better Brand X dropper. On the downside it only gets two-pot brakes and 140mm of suspension at both ends.

The Mythique’s geometry is pretty similar to the MTR, but it gets a shorter 468mm reach, a comparable 66.07° head tube angle, a 75.61°seat tube angle but a longer 445mm chainstay. 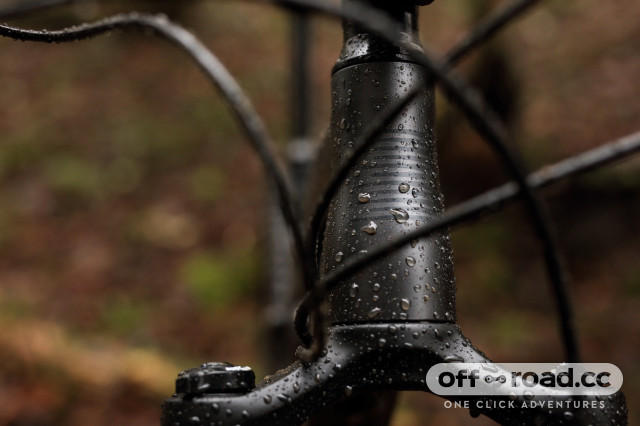 If you’re looking for a solid first full suspension bike, or you’re simply on a budget, it’s pretty tough to go wrong with the 2021 Boardman MTR 8.9. Its geometry is spot on for a range of riding; if you're a newbie it’ll grow with you as you progress, while if you're a veteran it’s ready and raring to be thrown down your favorite tracks.

It has the kit to back up the geometry too – more aggressive riders may want to swap the fork, but that's the only meaningful fly in the ointment.