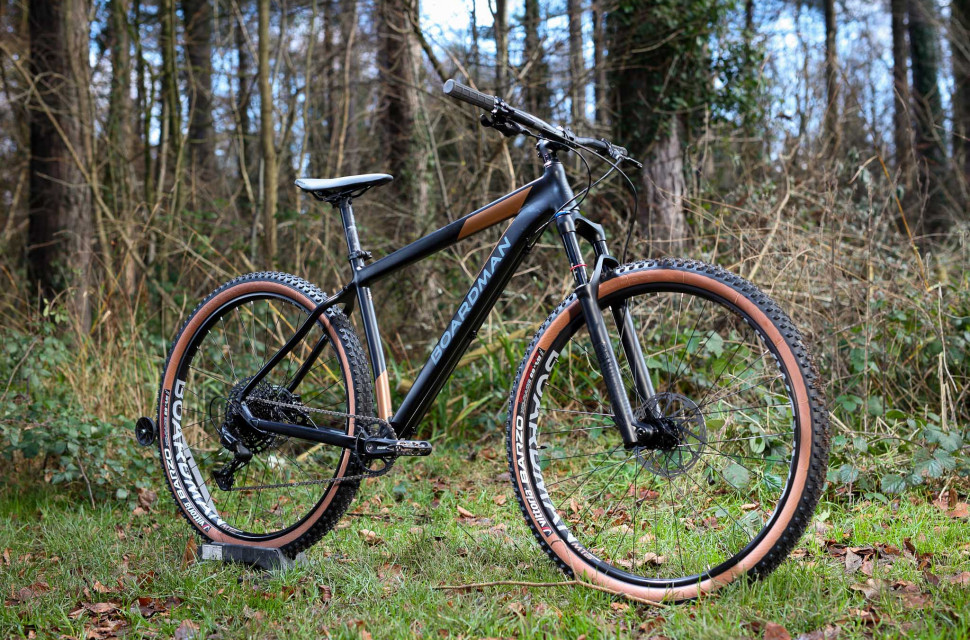 Sold in Halfords stores and online Boardman Bikes has a large range of both mountain and gravel bikes at competitive prices. 2021 sees both the mountain and the gravel and adventure range get good spec updates. We're fans of the full suspension mountain bikes, they are top-scoring in review here at off-road.cc

In terms of mountain bikes, Boardman Bikes operate a simple system with the name MHT denoting the bikes is a hardtail and MTR meaning the bike is full suspension one. Within these categories, the bikes come in different specifications denoted 8.6, 8.8 and 8.9 and in the case of the MTR model, there is a range topper 9.0 too.

Prices range from £1,000 to £2,000 for the full bouncers whilst the hardtails start at £650 for the women's model and top out at £1,000. We've tested last year's MTR 8.9 and also the brand new MHT 8.9, both bike compounding our views that Boardman makes solidly specced mountain bikes that are both fun and fast!

In terms of gravel and adventure bikes, Boardman prefix's all model using 'ADV'  where there are three bikes to choose from, the ADV 8.9, the ADV 8.6 and the ADV 8.6 Women's. 2021 includes new specs and colourways for both the women's and the men's bikes. There are three bikes to choose from and all are under £1,000, making the brand a very competitive option for those looking to dip their toe in the gravel and adventure bike pool. Boardman says all these bikes are built to tackle anything from two paths to bridleways to forest roads and, we suspect, a commute to two.

The new Boardman 2021 bikes kick things off with a bang, giving all the bikes in the range 29er wheels rather than 27.5". The travel at the rear gets longer too with 145mm of rear squish matched with 140mm or 150mm forks. We actually saw a sneak peek of this new bike whilst it was in the prototype stage way back in 2019. 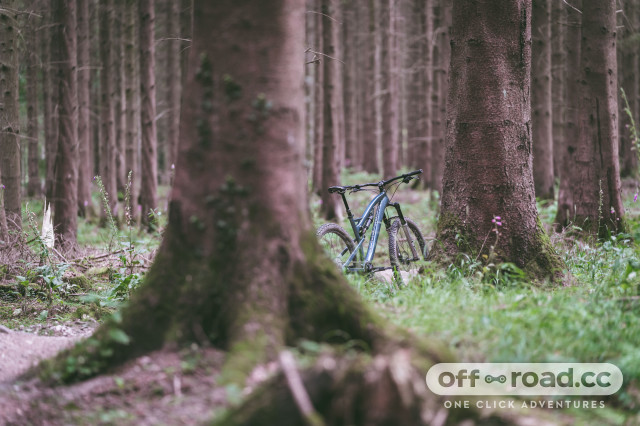 Geometry has changed across the range too compared to 2020, with this new trail bike getting a slacker 66 degree head angle, a steeper effective seat tube angle at 75.5 degrees and longer reach's across all sizes with a large sized bike seeing a lengthy reach of 475mm, albeit with an also long 638mm effective top tube. Chainstays sit at 440mm for all sizes and the seat tube, on a large at least is long at 475mm too. There will be three sizes, medium, large and XL to choose from. Lastly, the full suspension women's bikes are dropped from the range in 2021, no bad thing, last years women's specific bikes sported identical geometry to the men's/unisex bikes anyway.

Boardman also adds a new MTR 9.0 model to the four bike range. This new range topper is £2,000, £400 more than the most expensive bike (MTR 8.9) form 2020 but give customers a choice of a whole new set of decent components attached to the same frame. Read on for more details... 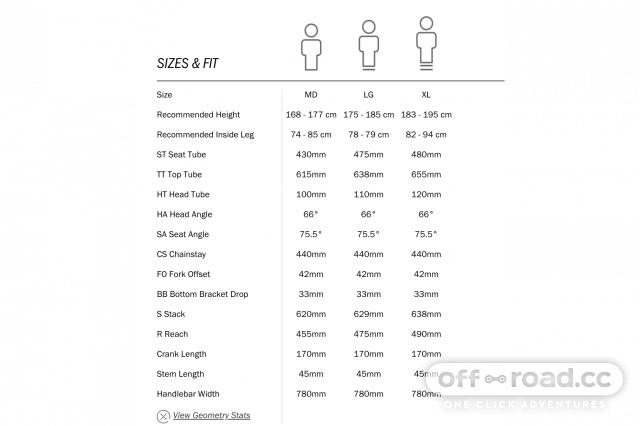 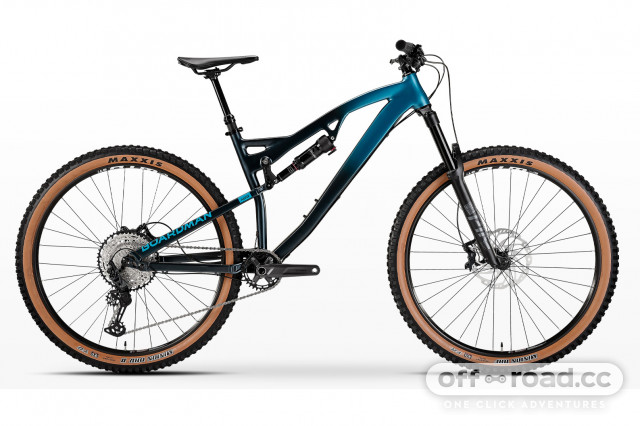 Alongside those geometry updates the flagship bikes gets what we think is the best colourway in the range as well as X9 alloy frame. Upfront the bike gets a Rockshox Pike Select fork with 150mm of travel, paired with a Rockshox Deluxe Select+ rear shock. There's  a Shimano SLX 12 speed drivetrain with 32T chainring giving large gear range, plus there are Shimano SLX 4-piston brakes. There are decent tyres too, a 2.5" Maxxis Minion DHF EXO TR up front with a Minion DHR II at the back, fitted on WTB ST-i30 rims and Shimano hubs which are pretaped for a tubeless setup. The cockpit gets a Boardman own brand 780mm wide bars and a 45mm stem, plus there's a Satori Sorata Pro dropper post (a relatively new budget dropper) with 125mm travel on the medium and 150mm on the large and XL bikes with a Fizik Taiga saddle on top. 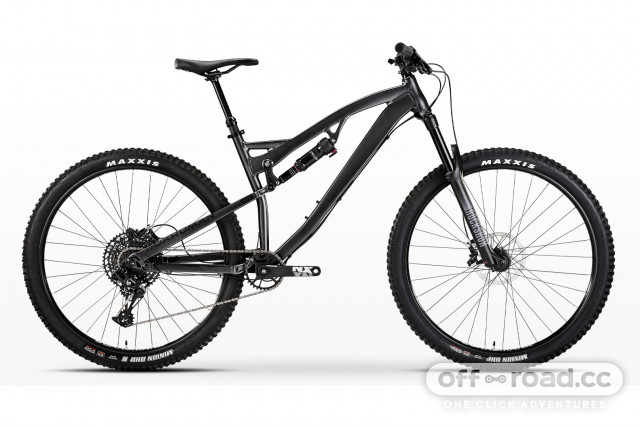 Previously the range topper, the 8.9 now still comes in at £1,600 with the new geometry and 29er wheels. This bike and others below it in the range have the brads X7 alloy which we presume is slightly heavier than the X9 on the MTR 9.0. Spec-wise this bike has a Rockshox Gold RL 35 fork with 150mm of travel whilst the 145mm of rear travel is dealt with via a Deluxe Select+ shock just like the MTR 9.0. The drivetrain here is a SRAM NX Eagle (12 speed) one paired with SRAM Guide T four piston brakes and an identical cockpit to the pricier bike including the dropper post. Tyres used are a Maxxis Minions (DHF front and DHR II rear) on Boardman on wheels. 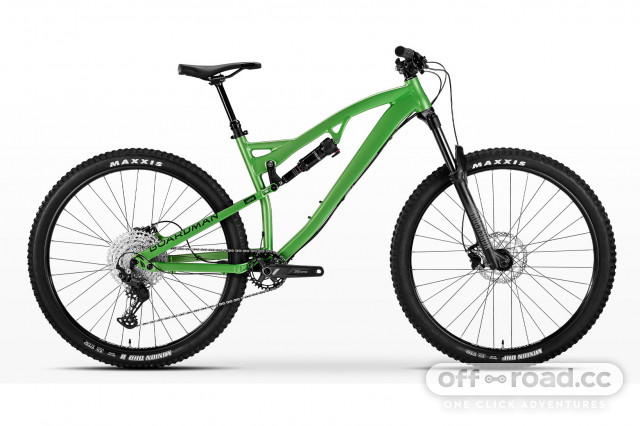 Next in the range is the MTR 8.8, seeing a price hike of £50 to £1,300. The bike is fitted with a Rockshox Recon Silver RL Solo Air fork (150mm travel) with the same Rockshox Deluxe Select+ shock. Elsewhere there is a Shimano Deore 11 speed drivetrain and Shm=imano MT200 brakes. This bike also gets a dropper post and the same cockpit, wheel and tyre set up as the MTR 8.9. 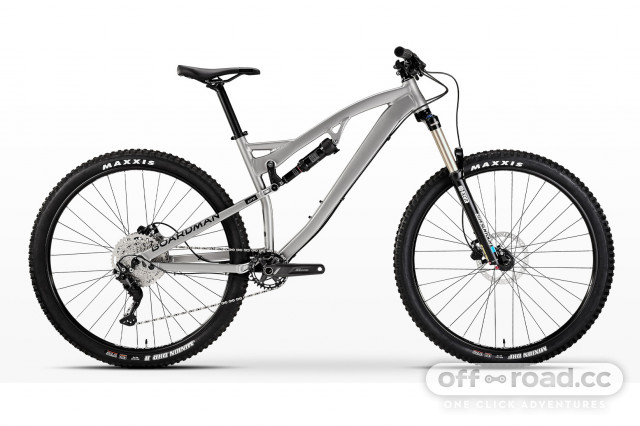 The cheapest bike in the range comes in at £1,000 and forgoes 10mm in front travel, the Suntour XCR34 LO-R DS Air fork has 140mm travel. There is an entry level Rockshock Select shock and a 10 speed 1x drivetrain from Shimano with Tektro HD-M285 brakes. The dropper post is still listed in the spec but not shown in the photos on Boardman's website. Elsewhere the cockpit and wheel set up is the same as the MTR 8.8.

The Boardman hardtails use the model name MHT and the same naming system of numbers with the 8.9 as the range topper. It's a three-bike range with two 120mm 29er unisex bikes and then a cheaper women's specific bike which gets smaller wheels and comes in smaller sizes too. All have alloy frames and are Boost front and rear with thru axels too.

The unisex bikes get rather conservative geometry compared to their full suspension counterparts with a 441mm reach on the large frame and 73.5 degree effective seat tube angles alongside a 68 degree headtube angle - we reckon these are mile munching hardtails rather than all our trail bikes. 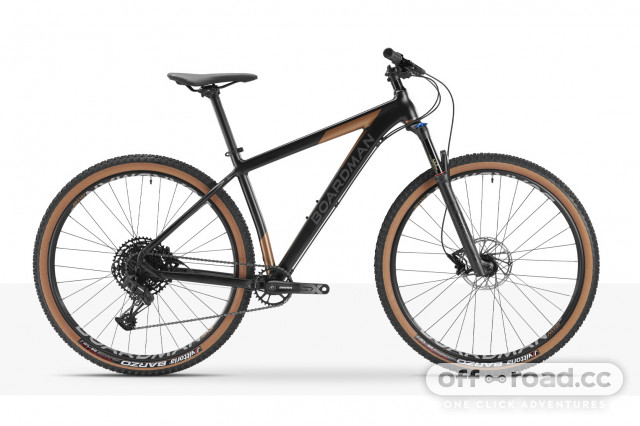 We have reviewed this bike, click here to head over to that test and see just what we thought of the bike! In terms of specification, the most expensive bike gets a 120mm Rockshox Reba RL fork, a SRAM SX Eagle 12 speed drivetrain and SRAM Level T two-piston brakes. The cockpit is full of Boardman own brand parts and there are Boardman wheels too which are tubless read and fitted with Vittoria Barzo TLR 2.0, 2.25" tyres. 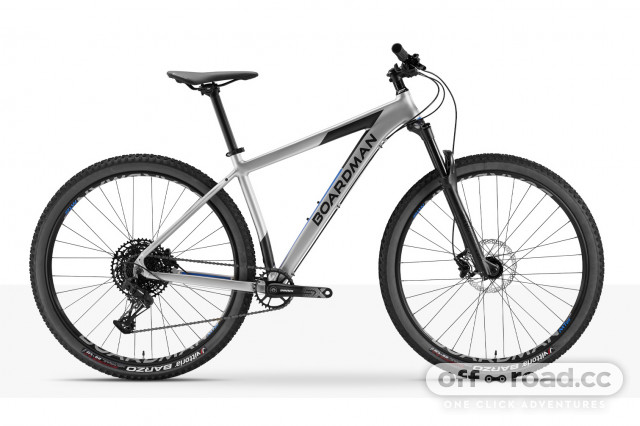 Using an identical frame to the MHT 8.9 the MHT 8.8 gets a 120mm fork too this time a Rockshox Judy Silver one. Again there is a SRAM SX Eagle drivetrain but this bike uses Shimano M400 brakes. The Boardman cockpit and wheel/tyre set up is the same as the more expensive bikes.

The women's bike uses a different frame to the above two bikes with slightly different geometry in terms of a sorter reach and shorter seat tubes too. The frame has quick-release axles front and rear The bike features 27.5" wheels on all sizes too. The spec is more along the budget lines as the price dictates. There is a Suntour Raidon XC LO-R air fork, Shimano Deore 1x10 speed drivetrain. The bike gets narrower bars and a women's specific saddle as well.

major changes for 2021 sees the top ADV 8.9 carbon fork used get a thru axle for increased stiffness and more precise handling over it's 2020 counterpart, plus it's now bolt through at the rear too.

Across the range the ADV bikes get a slacker headangle too, from 71 to 71.5 ° (size dependant) and there's more bottom bracket drop compared with last year's bikes which the brand says will inspire more confines as it will increase stability off-road. The wheelbase has been lengthened too, adding to that stability, plus the brand is now using taller headtubes and shorter stems across the range which they say keeps the handling sharp whilst giving a more comfortable position over longer distances. Elsewhere there are mudguard and pannier rack mounting points plus two sets of bottle bosses. 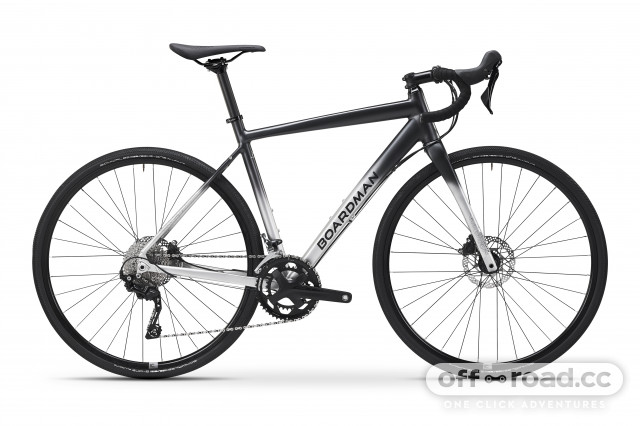 The 2021 bike gets a 2x10 Shimano GRX drivetrain with an FSA chainset and hydraulic GRX brakes too. That means you benefit from a clutch derailleur to prevent chainslap and effective brakes too. The bike is fitted with 700c Boardman ADV wheels with Formula hubs and Schwalbe 38c G-One All Round tubeless ready tyres. Elsewhere there's a bar with 120mm drop and a 6 degree flare making up an all Boardman cockpit.

he entry level bike gets QR axles and dropouts rather than the bolt through of the more expensive frame and fork but keeps all the other new features, including the frame itself and a carbon fork, still benefiting from the geometry updates.

The bike gets a 2x9 speed drivetrain in the form of Shimano Sora, Tektro mechanical disc brakes and the same Schwalbe G-One All Round 38mm tyres on the same wheelset. There's the same cockpit, with mostly Boardman own brand components. 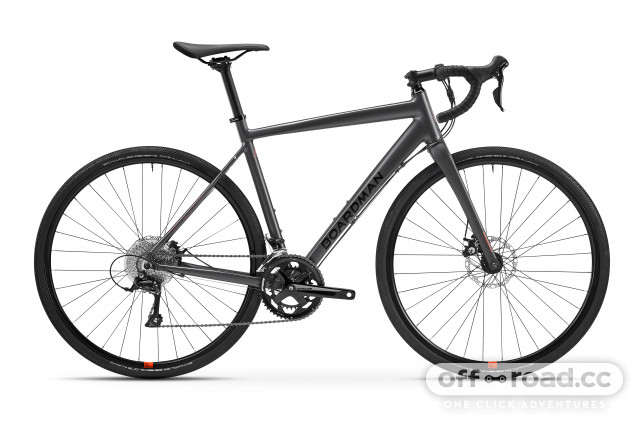 The women's bike (below) gets different geometry with shorter top tubes and seat tubes size for size. The size small women's bike is also smaller than any bike in the men's range, giving shorter riders another option. The ladies version of the bike is the same price as the men's ADV 8.6 and gets all the same specs too aside from a 70mm stem (rather than 80mm) and narrower bars across the range. 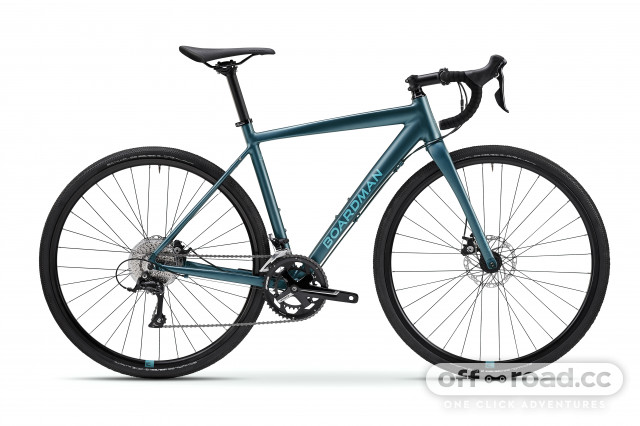 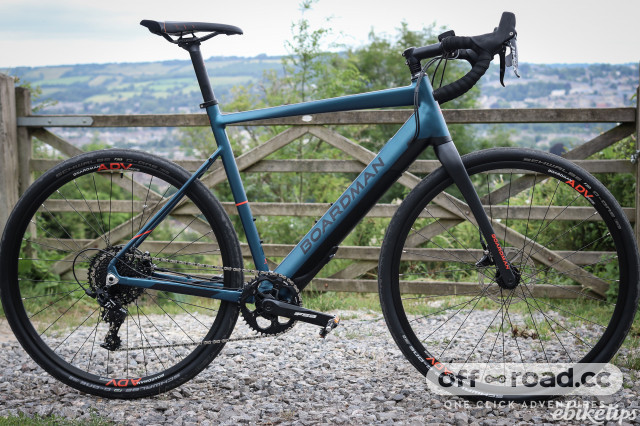 The only e-gravel bike in the range is the ADV8.9E, a bike we reviewed over on our sister site, ebiketips back in 2019. We reckoned this bike was a good quality e-road bike with a sensible spec and an attractive price tag. The bike is powered by the Fazua Evation drive system giving 250w of power, 60Nm of torque and a 250wH removable battery with three modes of assistance that you can alter using the new software in the Black Pepper update. In terms of spec the alloy bike gets a full carbon fork, thru axles front and rear, a SRAM Apex groupset with hydraulic brakes and Schwalbe G-One Speed tyres.

We name the 10 lucky winners of the aB PVD 1x Oval chainring
The absoluteBLACK PVD 1x Oval Chainring competition is now closed and we name the winners! Are you one of the lucky 10 winners?
News

Topeak Tune-Up Stand X bike stand review £60.00
If you're after a compact bike stand that'll hold heavy bikes securely and even allow a bit of gear tuning, this does the trick