Skip to main content
Log In Register
Rockrider AM 100 S review £1,400.00
A solid platform for those new to mountain biking, but limited by old school geometry 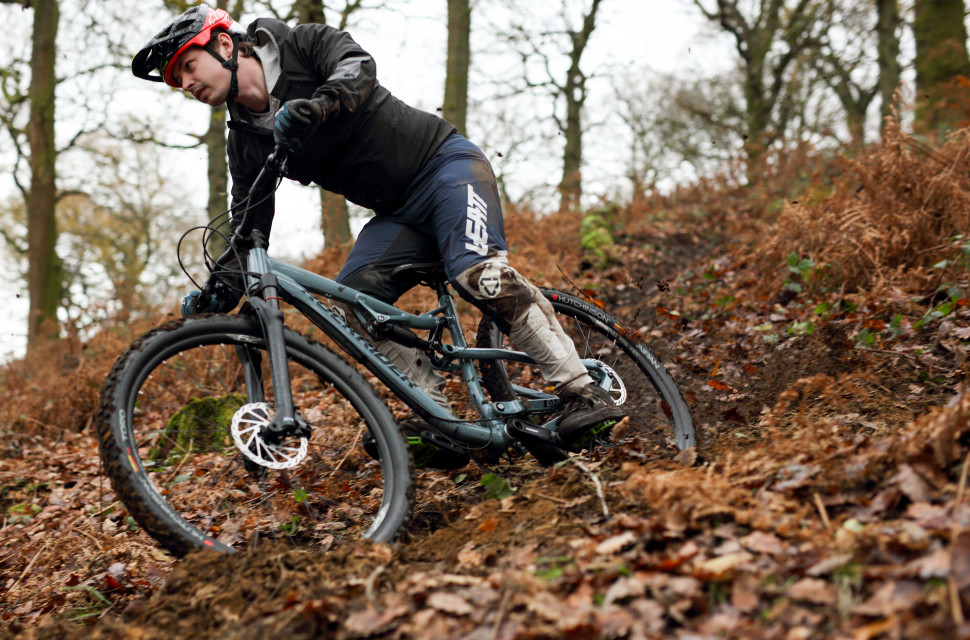 The AM 100 S from Decathlon-owned brand Rockrider is a wallet-friendly, all-mountain rig that offers an impressive pedalling platform and an agile ride. While providing all the kit you expect from a modern mountain bike and prime for trail centre routes, its rather dated geometry holds it back on the gnarlier trails.

Sitting solidly in the mid-travel category, the AM 100 S comes kitted with 150mm of travel up front and 140mm at the rear. The bike we have on test rolls on 29" hoops, but Rockrider says it'll happily run 650b wheels if that's your style.

That would, however, change the geometry by lowering the bottom bracket significantly. 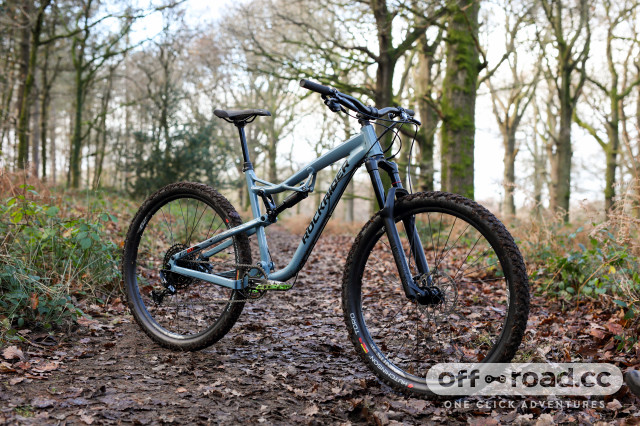 The 6061/6013 grade aluminium frame uses a mix of external cable routing and an internally routed dropper cable, which strikes a great balance between ease of maintenance and tidiness. 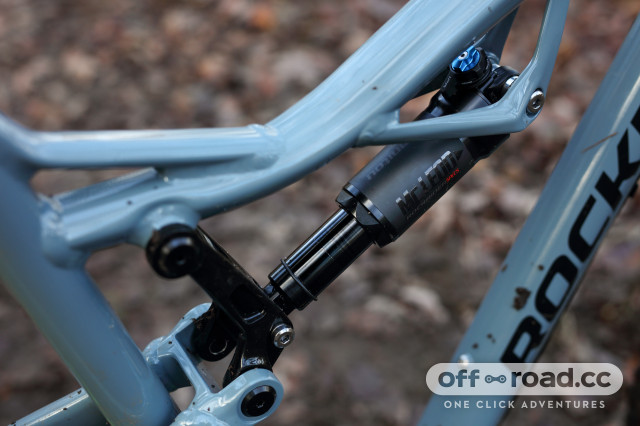 Hidden neatly underneath the top tube is a Manitou McLeod shock, which gets a special design for this bike. It comes with a four-position compression adjustment and a rebound dial, but unfortunately, the rebound dial lacks indexing and it's placed in a tough to reach spot.

This means it's a little bit trickier to dial in your shock, and it's difficult to make note of where you like the rebound for later too, but it's protected well enough that it won't get nudged during a ride once you've got it set up. 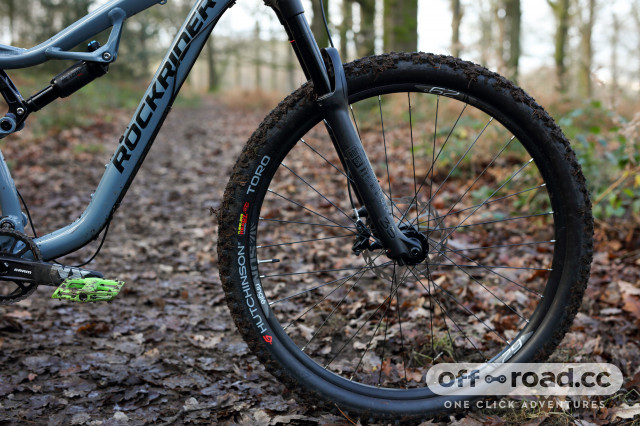 Our 150mm of front travel comes from a RockShox 35 Gold RL. As its name suggests it wears 35mm stanchions and, paired to its thru-axle, it's impressively stiff. Granted it's not quite as stiff as pricier forks, but it certainly gets the job done to a good standard.

It is a simple fork. You only get compression and rebound dials – fair on a bike of this price – but on the whole, it's a good performer. It likes to sit in its midstroke and it's not massively progressive, but it copes with repeated hits reasonably well.

Okay, at the beginning of the travel it is a bit hesitant to break away, but again that's a common trait of cheaper forks. At this price, I think it's a good balance between stiffness and performance.

The rear of the bike is a completely different animal. When out of the saddle and rattling downhill with it dialled to 30% sag, it's eager to blast through its travel. This results in a plush ride that offers a ton of confidence at speed through fast, chunky sections, but in tight corners and compressions the rear wallows in its midstroke, sucking up any pump-worthy speed boosts.

This also means that when you're out of the saddle putting maximum effort through the pedals, the suspension bobs an awful lot, draining a lot of what would be forward momentum and wasting precious, precious energy. 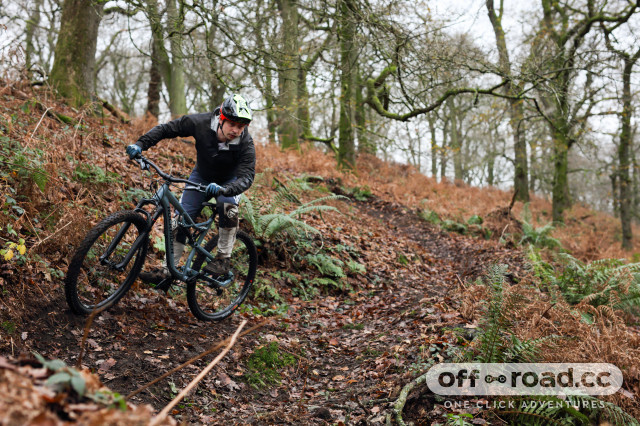 It also doesn't offer a lot of feedback through the pedals. Running the shock with a little more air (25% sag) does mean it's not quite as eager to give up its travel, but the extra air doesn't add a lot of much-needed progression.

The McLeod on the AM 100 S lacks Manitou's King Can upgrade so, unfortunately, you can't add volume spacers and the progression can't be tuned. As a trade-off it's nice and forgiving, something new riders will appreciate. 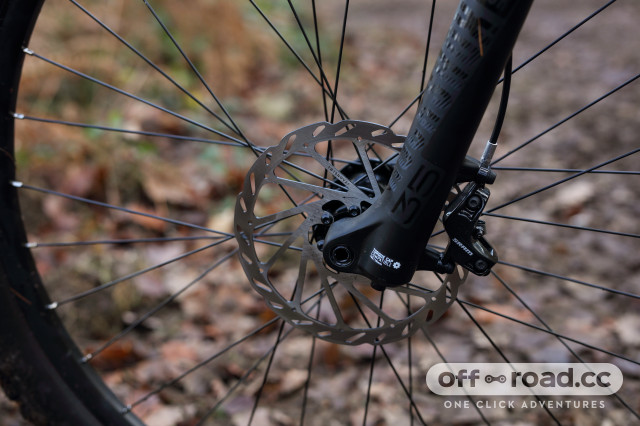 With this in mind, seated pedaling is surprisingly efficient. Sure, there's still a smidge of bob but the bike's pleasant pedaling hides it's bordering-on-hefty 15.7kgs well. Even with its larger than preferred 34t chainring, I never found myself reaching for the lockout switch. 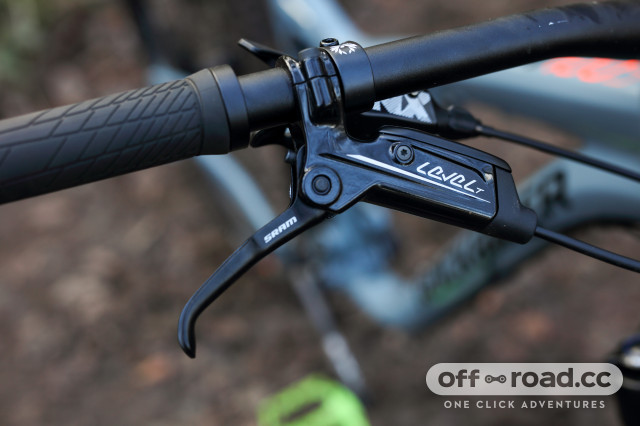 As for the rest of the kit, let's start with the SRAM Level T brakes. They're simple and lack tool-free adjustment, but they're effective. The four-piston caliper at the front is very welcome indeed, adding a handful of extra braking power. There's also a SRAM NX Eagle 12-speed drivetrain offering its 454% gear range.

The cockpit here is fairly modern, comprising a 760mm handlebar and 35mm stem. There's not a lot to complain about apart from the grips; they're pretty hard and plasticky which made me overgrip the bar. When paired with the slightly sticky fork, this lead to some mild arm pump. It's nothing a £20 upgrade won't help mend, though. 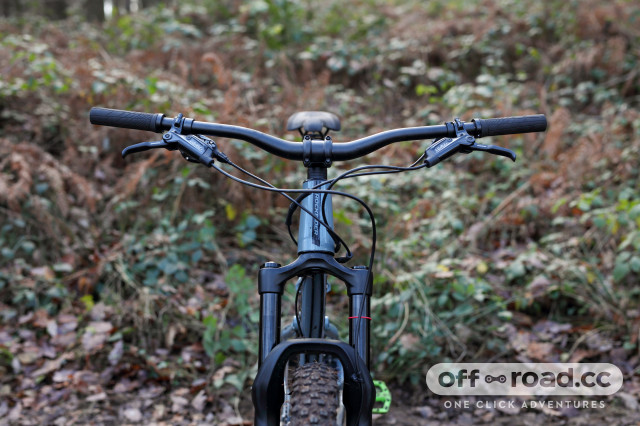 Hutchinson has the tyres covered here. At the front sits a 2.35" Toro while the rear is a 2.25" Taipan, while both get the brand's Racing Lab tech. They grip reliably on a range of surfaces but are quickly overwhelmed in loam and slop due to their hesitance to clear crud.

For everything else though, they do a great job of balancing grip with rolling resistance. So much so I'd be happy using these year round, albeit while avoiding excessively soft patches. 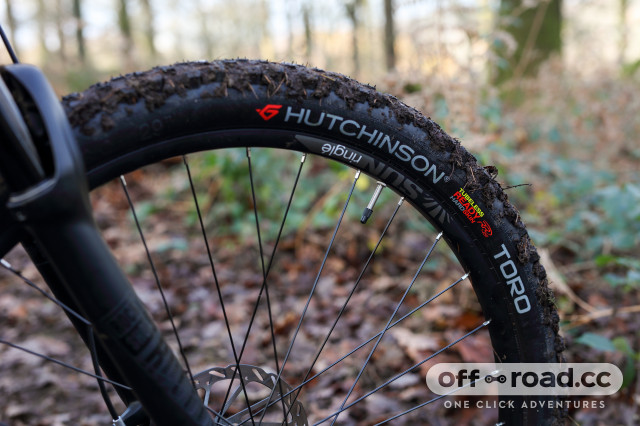 They're seated on a pair of SunRingle Duroc 30s with Boost axles. They have an external rim width of 30mm and an internal width of 27mm, which gives the stock tires a nice shape and supports them well – though they may not be suitable for much fatter rubber in future. 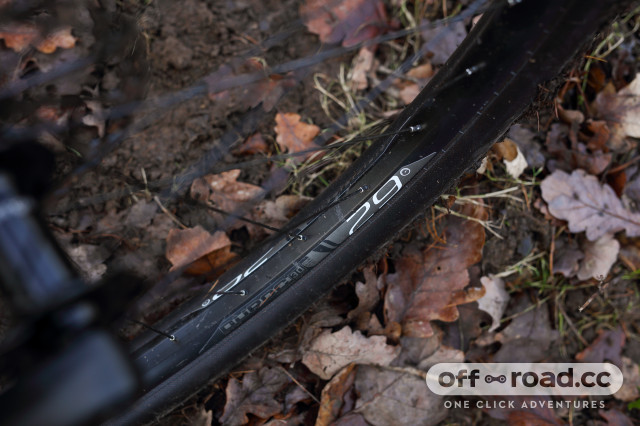 It's nice to see our Large-framed test bike come kitted with a 150mm dropper post, but it's worth noting that smaller frames get a 120mm post. During my test, I had no issues with it at all. The lever has a pleasingly light action, which I appreciate. 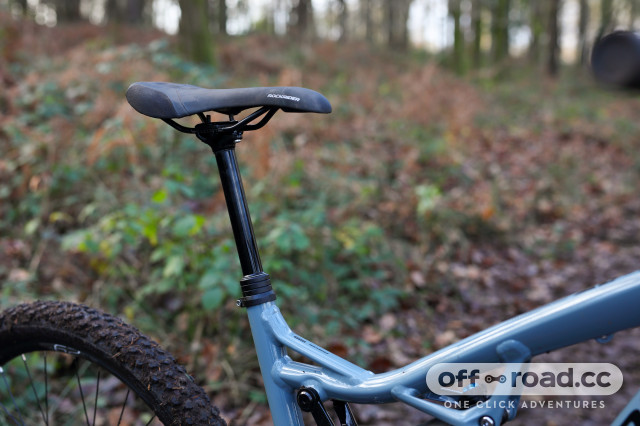 As for the bike's fit, it's an interesting one. I sit between a medium and large size, and usually opt for a large because I enjoy the benefits of a longer, more stable bike. With my 78cm inseam, though, I found the post a tiny bit too tall at full extension.

We're not talking much (about 5mm), and thankfully the dropper has unlimited positions so it's easy enough to compensate. It's definitely something to consider though if you're also in between sizes. 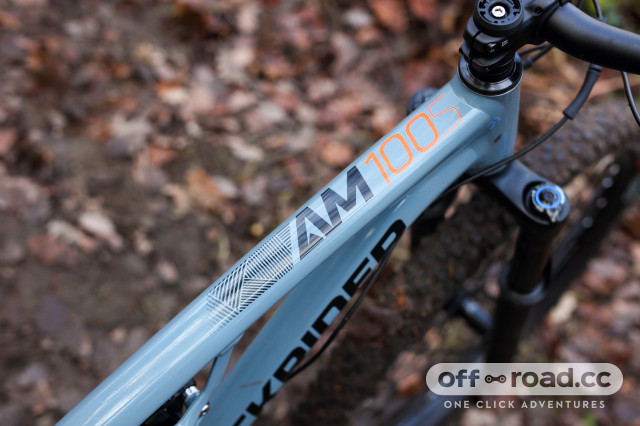 Rockrider has focused the AM 100 S's geometry towards agility and maneuverability. However, compared to many modern trail bikes it's definitely conservative.

The 447.5mm reach limits fore and aft movement, which makes it tough to distribute weight properly. It's especially noticeable on steeper sections of trail, where it's tricky to get your weight low enough to drive the bike through obstacles.

Even for a large frame the seat tube is tall, so there's a lot of bike between your legs which stopped me from getting my weight low enough on steep sections. Instead, the bike forces a higher centre of gravity, making it properly sketchy when the gradient falls away. 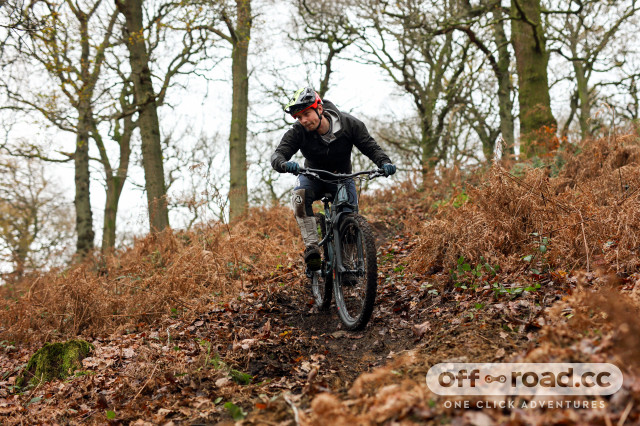 Commonplace on a number of trail bikes, its 66° head angle isn't much to rave about either. It's doesn't offer a lot of confidence on steep sections because it makes the front end super twitchy. But when the trail levels out, you quickly find the benefit of that head angle.

When paired with its stumpy reach, it creates a quick-handling front end which is much needed in tight corners. It helps balance the squishy rear suspension too, which keeps the ride reasonably spritely when changing direction. 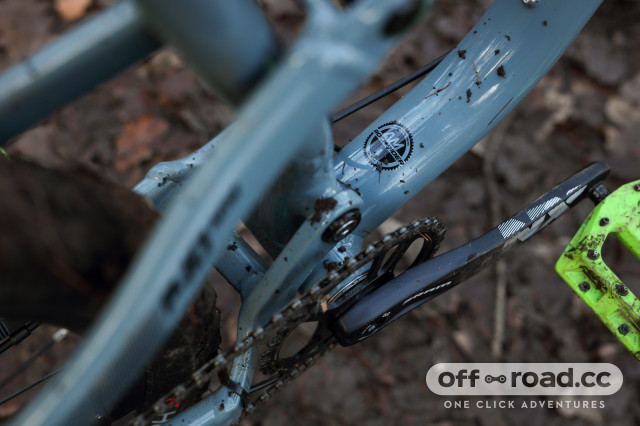 However, it must be said this bike isn't aimed at steep, natural trails. Throw it down a flow trail that doesn't have a huge gradient, the bike comes into its own.

While it has its quirks, Rockrider has done a great job of giving the AM 100 S an agile ride regardless of its energy-sapping rear end. It handles sweeping corners and straight, rough sections with ease, making it ideal for most of the blue and red trails the UK has to offer. 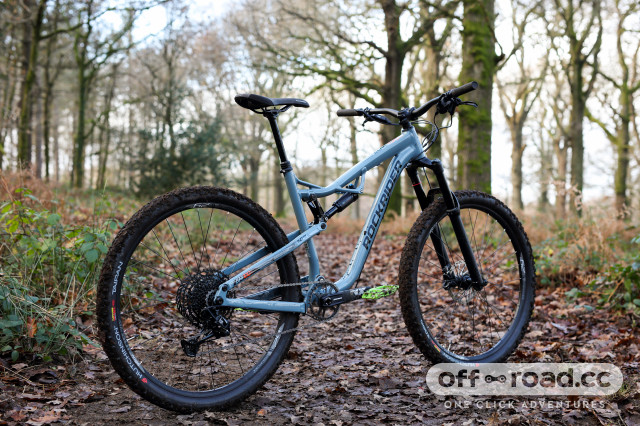 The AM 100 S offers decent value for money; £1,400 gets you a reasonably capable bike with decent kit for the cash. The Vitus Mythique VRS is £49 more, for instance, but its spec isn't quite as generous.

On the other hand, the Mythique's geometry makes it a much more plausible bike to upgrade, as it is much better-rounded and can handle a greater variety of trails, which will only encourage owners to stick with it for longer, and boost value that way. 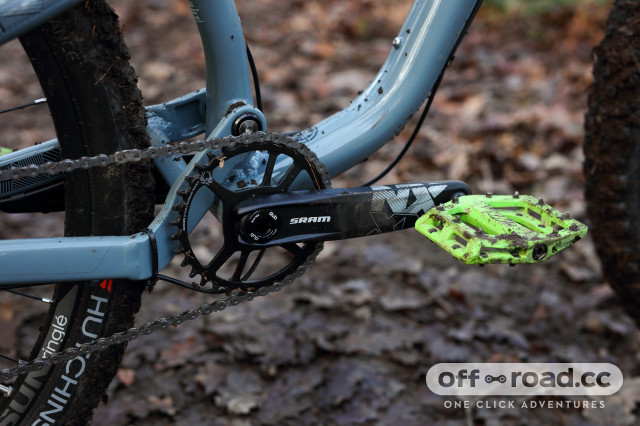 Because of the AM 100 S's old school geometry, big upgrades aren't wholly justified. There's absolutely no stopping you from upgrading the fork or wheels as there are plenty that will happily fit, but it's more a case of whether it's worthwhile in the long run. A new rider might jump on this bike and outgrow the geometry in terms of skill level long before they outlast the bike's kit.

To conclude, the Rockrider AM 100 S makes a great bike if you're fresh into the sport. It's well sorted for what most of the UK's trail centers can throw at it, and it's a great platform to grow into. It offers a decent kit list for the cash and its plush rear end remains nicely composed over chattery sections.

Riders with a few years under their belts, however, will find the geometry hinders them on more demanding tracks, and that it's not the best choice for upgrading as you go.