Skip to main content
Log In Register
OrNot Bar Bag review £85.00
Versatile, capacious and easy to use bar bag for your adventures 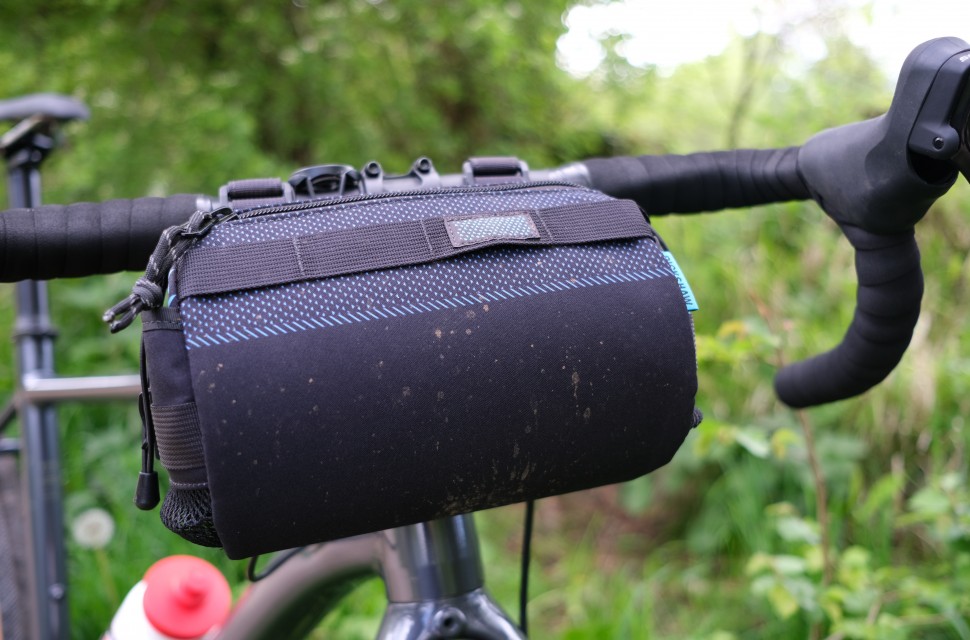 If you need to carry food or essentials on your bike without resorting to large frame or seatpacks then the OrNot Bar Bag is a useful size if you want to be able to carry what you need, with a solid design that is stable over the roughest ground.

The smart design of the OrNot Bar Bag and the usefulness of being able to carry extra bits and bobs on longer rides and off-road adventures has won me over. I started this review a sceptic, I’m not a fan. Whether it’s carrying all my tools and spare bits, or taking a camera or a load of chocolate bars, the bag is endlessly practical. 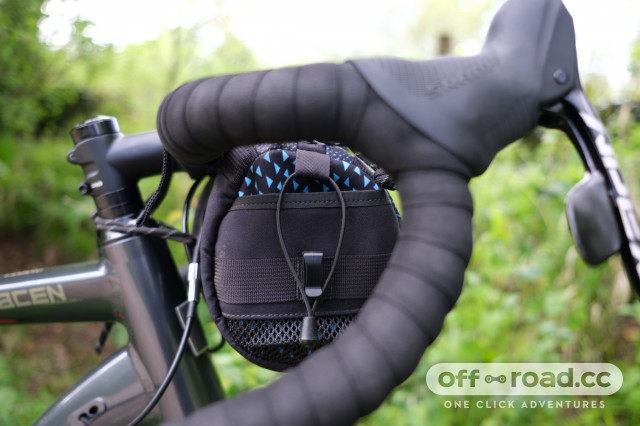 Fitting the bag to the bike is a doddle. You’ve got two large velcro straps looping over the handlebar and a stabiliser tether cord that goes around the steerer tube below the stem or headtube, with three different anchor points to best suit your particular bike setup. You might want to put a spot of protective tape on the head tube if it makes contact depending on your bar and bike setup.

The bag is constructed from a heavy duty custom printed nylon canvas with a rigid plastic inner liner that provides good structural integrity and gives the bag its barrel keg shape. Basically, it holds its shape where some bar bags are floppy and saggy. This makes it easier to load and with four litres of volume, you’ve got gert loads of space for all your riding essentials.

An additional two side mesh accessory pockets with drawstrings to secure the contents. These were designed to pocket a smartphone for instant Instagramming (hence the Gram Pocket name) but they are useful for other small items you might want easily to reach, like some food or a multitool. 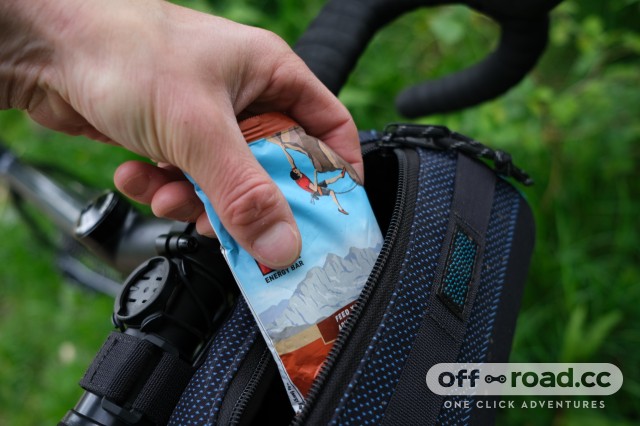 Measuring 9in wide with a 5.5in diameter, the bag takes up the majority of space in front of the bar. I tested it on 40-44cm wide handlebars and had no issues with space. The only thing to consider is the inability to obviously use out-front computer and camera mounts, and you’ll need lights that sit on top of the handlebar and able to see over the top of the bag.

I’ve been using the Bar Bag for the best part of the last six months and it’s become a really useful bit of kit in a way I never imagined it would when it first landed in my hands. It now lives permanently on the front of my Fairlight Secan and is loaded with snacks and spare tubes (instead of using a saddlepack) and is super useful for adding extra clothing on days when the weather can’t make up its mind. So things like gloves, arm warmers, rain jacket, they all go in there.

I’ve had a few laughs from fellow cyclists when turning up for a ride with it. But I have the last laugh when I pull out an endless supply of chocolate bars that haven’t melted or mushed in my jersey pocket. 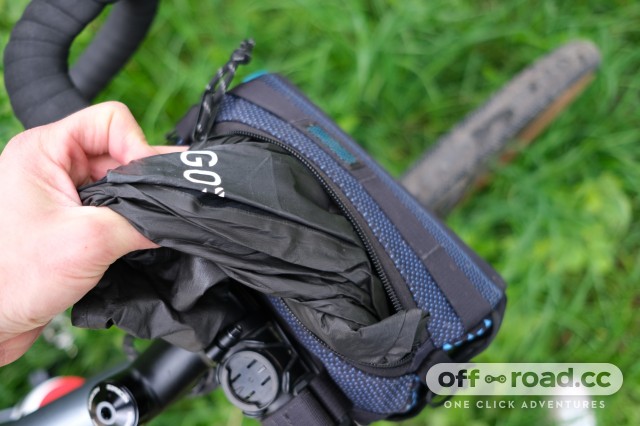 The size prevents you from adding too much weight to the front of the bike and it doesn’t affect the handling. It doesn’t shake, rattle and bounce around either. The only thing you need to do is ensure you’ve properly loaded the contents so nothing rattles inside, but bags and wraps take care of any hard parts that might jiggle about.

Its width does minimise your ability to ride along on the tops, but on my width handlebars, there’s just enough space at the edge to use this position. It doesn’t pose any problems with shifting and braking, but I can see it perhaps being an issue on narrower handlebars. Probably best to get your tape measure out before buying if you do have narrow bars. 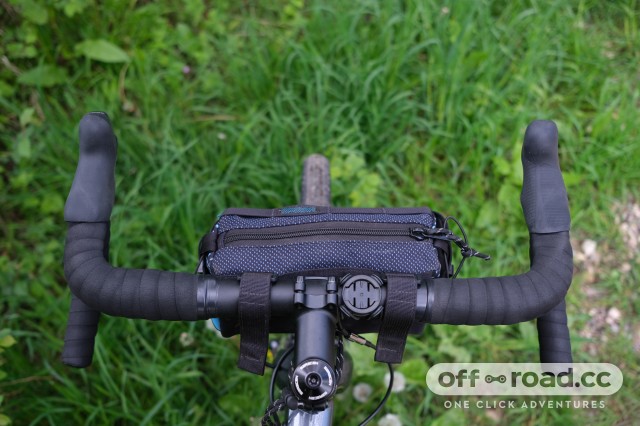 Durability has been very good. It’s not waterproof so that’s a consideration when riding in bad weather but I’ve not had any leakage when riding in downpours, it does keep moisture out well enough.

Who’s it for then?

It’s for any cyclist who is doing rides long enough that three jersey pockets aren’t quite enough cargo capacity, but a seat or frame pack is overkill. It lets you take extra food and clothing to deal with changeable conditions. 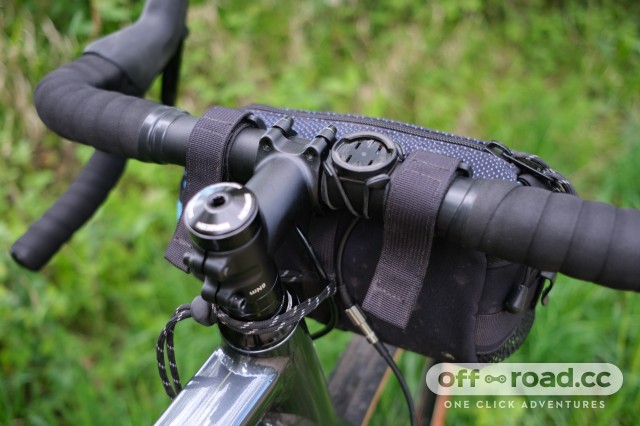 It’ll be ideal for an event like Dirty Reiver where you know you’ll be in the middle of the forest for many hours with no Tesco Express for miles.

Commuters can also benefit because there’s enough space for your sarnies, wallet, phone and other bits and bobs. Touring and Audax cyclists will find the cargo capacity useful too. It’s eminently more useful than the small top tube fuel pouches in my opinion.

No doubt about it,  £85 is a lot of cash for a small bag, but it’s exceptionally well designed and beautifully made with careful attention to the key details.

The Outer Shell Adventure Drawcord handlebar bag comes in about the same price so that could be worth a look.

There’s also the Restrap Bar Bag Holster which comes in at the same price as well.

Our Handlebar bag is for the cold morning coffee jaunts, afternoon burrito boogies and sunset soirées. Strap it to your race bike, cross bike, dad bike, fat bike, or whatever, it’ll do the job as long as it’s on some handlebars. The Bar Bag has enough room for some food and a few warm layers, or a bag of coffee beans and some donuts, or three cold beers and a camera. Our handlebar bag let's you take cycling to the next level. It features two accessory pockets on the outside designed for quick, one-handed access to your Instacameras and music machines (yes, we designed a iphone pocket to make it easier to Instagram on-the-go). Made from heavy duty, custom printed nylon canvas, with a rigid inner structure, The Bar Bag will stand the test of time.

The Bar Bag easily attaches to your handlebars via 2 velcro straps and a tether cord which we like to wrap around our stem / headset. It measures about 9 inches wide with a diameter of 5.5 inches totalling 250 cubic inches and 4 Liters of volume. Check out The Blog for a more detailed description of "How to Bar Bag". The Bar Bag is a collaboration with San Francisco’s Rickshaw Bagworks. They design and manufacture customizable bags of all shapes and sizes right here in their own sewing factory in the Dogpatch. We enlisted their help for obvious reasons - They are super talented, super local, and just about the most friendly people you will ever work with. Pro Tip - Since The Bar Bag fits all bikes differently, be sure to use tape or a sticker to avoid paint wear in high friction areas.

It's a bit pricey

A smartly designed handlebar bag that increases your carrying capacity, is easy to use and is durable, and is useful to everyone from roadies commuting and Audaxing to adventures rides bikepacking

I did pick up something very similar a while back, more basic design and probably lighter and reflective detail. It was £10. As seems to be happening now with cycling some of the new kit seems so expensive. Is this really worth an extra £75!