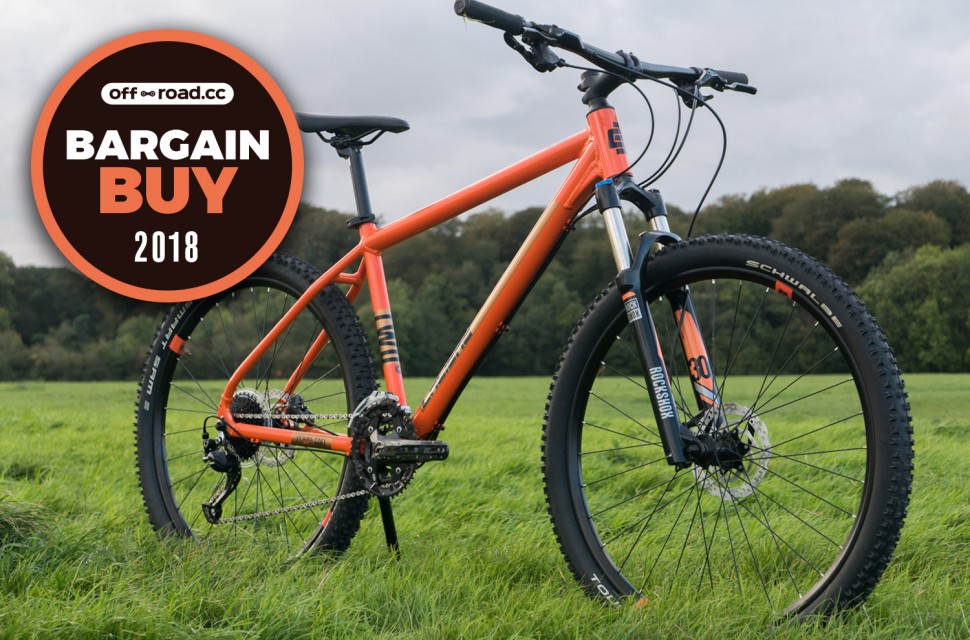 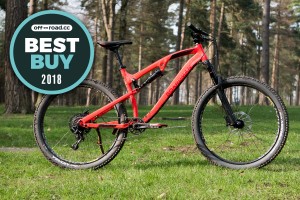 Our winner of the 2018 off-road.cc Bargain Bike is the Calibre Two Cubed, a trail hardtail that is small on price and big on fun. It isn't just the cheapest mountain bike here - that doesn't necessarily make something a bargain - but the Calibre Two Cubed is a great value hardtail with fine handling thrown in too. This is the first of three mountain bike awards in the off-road.cc lineup alongside Benchmark Bike and Best Buy to be revealed over the next few days.

It was a close run race, read on to find out all about the winner and the runner-up in this category. For all the information on our judging criteria and upcoming awards, you can click here.

When it comes to bang for your buck, there's little to beat Calibre's Two Cubed hardtail. It manages to pack in a 9-speed drivetrain, quality aluminium frame and brand name kit along with solid handling that'll suit beginner and more experienced rider alike. It's about as close to perfect as you can expect for under £500. 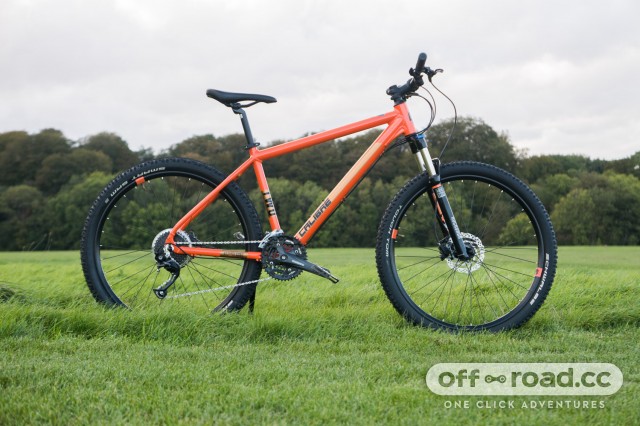 The Two Cubed is an update to the older Two Two, its moved to mid-sized 650b wheels for improved rollover and a smoother ride. The aluminium frame has also been updated with a slacker head angle and more reach, although the fork travel stays the same at 100mm, delivered by a coil-sprung RockShox XC30. While this means the fork isn't adjustable for rider weight, it's remarkably well damped for a budget unit, though get over-excited in rockier terrain and there's a fair bit of flex from the quick-release axle. Still, it gets a lockout plus a proper 1.125" steerer tube sat in an internal 44mm headset, allowing for a solid connection to the frame as well as smooth looks. It also means that you can upgrade to a stiffer tapered steerer fork in the future by switching out the lower headset cup. 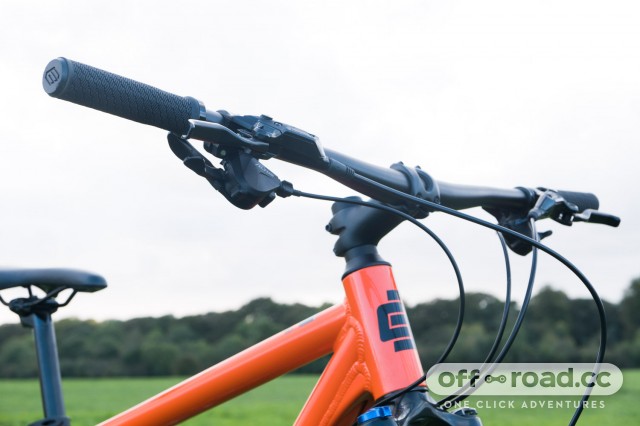 When it comes to the ride, Calibre has got the Two Cubed well dialled. The 67.5º head angle means it's actually pretty damn slack compared to most, meaning that the bike doesn't want to snatch the front end away or under you at the first sight of trouble. The calmer steering also means it's much less of a handful on steeper trails - up or down - and although I'd love to see a shorter stem than the 70mm item fitted, the nice and wide 780mm low-rise bars give you plenty of leverage to place the bike where you want it. 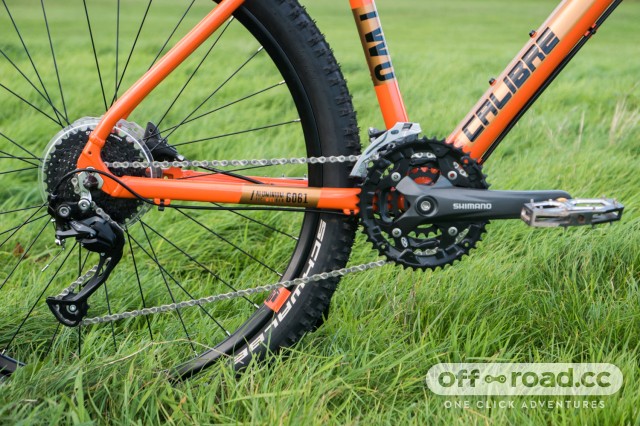 Having respectably short 435mm chainstays also means the bike is pleasingly eager to flick its rump around corners, with a lively, spaniel-esque feel in the turns. Having grown somewhat used to modern bikes with super-steep seat angles, the 73º seat angle left me feeling like a bit too much weight was over the back of the bike on steep climbs, but at 444mm for the 18" frame I rode, the reach is pretty decent, meaning once you're stood up there's plenty of stability for moving about when out of the saddle.

The 14.2kg weight might seem quite a chunk on paper, but it's good for a bike at this price and I didn't feel unduly held back when pottering around trail centres and messing about on natural trails - plus you always have some pretty easy gearing to fall back on should it get a bit much.

The Calibre Two Cubed is a genuinely great bike that's an excellent place to either start or continue your journey in mountain biking. Compared to many bikes at this price, it not only offers superb value but genuine off-road performance, rather than being something best left on the towpath or pretending to be rugged while staying on road.

It's got confident handling and works really well out of the box, even within the limitations of a very tight budget. Throw a couple of upgrades at it - most notably tyres - and you've got a bike which can deal with pretty much anything you can throw at it, from trail centre loops to big classic cross-country miles - with plenty of smiles in between. It's highly recommended.

Our runner-up is quite a different bike - and that's what make these awards so interesting to determine! Our second Bargain Buy will suit the aspiring racer rather than the rider that is new to mountain biking, it's a great cross-country partner with a spec list and price that really makes it stand out from the crowd. 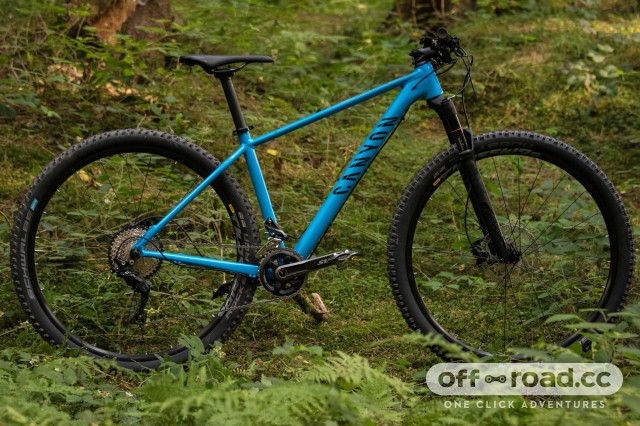 The Canyon Grand Canyon AL SL 7.0 is a cross-country racer with winning intentions that will be easier on your wallet than its competitors and can provide you with just as much speed. The direct sales model of Canyon shines through here with this alloy 29er cross country machine coming in at £1,199 complete with Shimano SLX and XT kit, Mavic wheels and Rockshox Reba RL fork. At that price and spec, it’s something only other direct sale brands can compete with, other similar bikes from non-direct brands get a fork and brake downgrade compared to the Grand Canyon.

Setting up the Grand Canyon to ride is a simple affair, the bike is ready to go out of the box and I doubt you’ll have any complaints about the specification aside from maybe thinking about a new set of tyres for wetter conditions or if you want to go tubeless. Riding wise the bike adopts geometry that puts you in a traditional cross country position, although not as much as the cheaper bikes in the range such as the AL 3.0 which only get 100mm forks giving them a steeper head angle than the 68.5° one we have on this AL SL 7.0.  The head angle, whilst it is by no means slack, offers a couple more ‘get out of jail’ free cards when tackling relatively technical terrain, the fact that there isn’t a dropper post impedes handling long before the head angle curbs the momentum. The effective seat angle is relatively slack at 73.5°, and whilst the bike isn’t the lightest hardtail I’ve ever sat on, it moves uphill at a fair pace, a steeper effective seat angle here would only help things further. 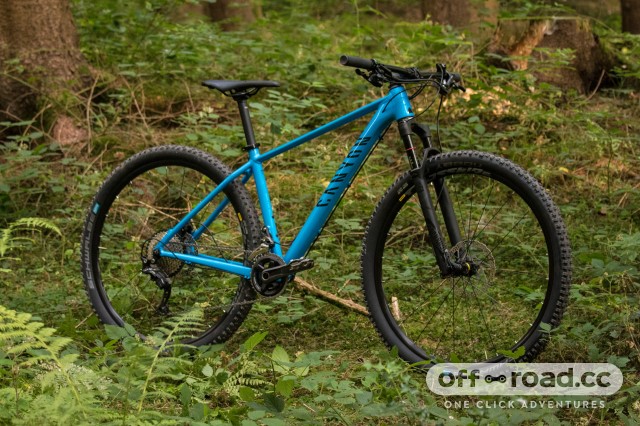 If you are set on pushing your limits on the cross country course then the Grand Canyon will be a good partner. It’s not radically different from other XC bikes on the market and it doesn’t break the mould in terms of geometry,  but with the help of the 110mm fork on the Grand Canyon, its slacker than other XC hardtails which I think can only be a good thing and with the release of the Canyon Lux it appears the brand is thinking in terms of more progressive geometry. As ever with Canyon, though, the spec list and price is the thing that makes it shine.

Tomorrow's bike is the winner of the Benchmark Mountain Bike award, stay tuned....