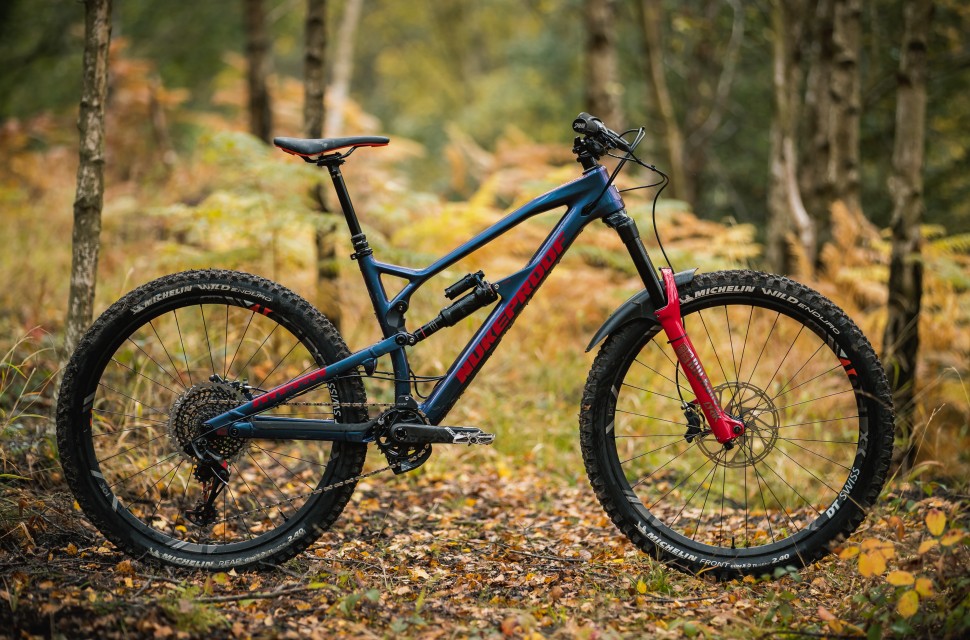 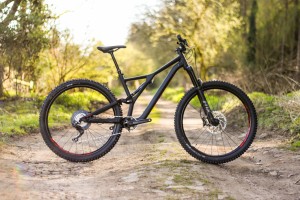 The 2019 Nukeproof range builds on a solid platform that saw it's latest overhaul completed just last year. The new season brings new colourways, new spec details and the inclusion of two of those 'hard to pin down' volume reducers in each and every shock.

We reported on the updates to the range last year when the carbon model was introduced. At this time the frame on both the alloy and the carbon models was altered to introduce metric shock standards, a wider spaced front shock mount with rocker link mounted bearing system at the rear to improve shock sensitivity and reduce wear and also longer reach on the large and extra large bikes. All that good stuff stays in 2019, Nukeproof says the range gets even better than 2018 with some subtle refinements, upgraded specification and the introduction of a new model, a cheaper carbon model, the Mega Carbon Pro. 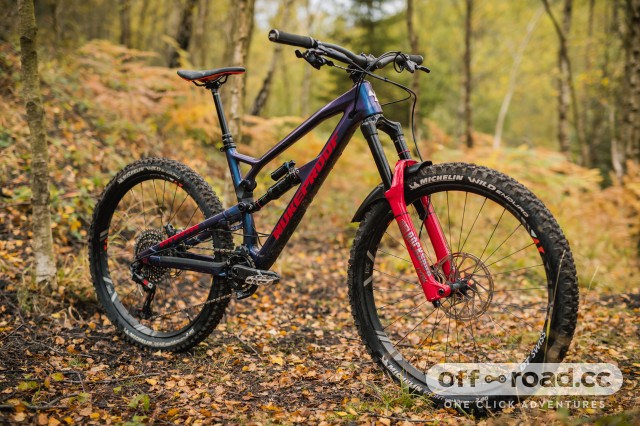 In short, hot off the back of another Enduro World Series title, the Mega retains its EWS winning ways with 2019 bikes seeing the addition of the latest offerings from Rockshox, Sram, Fox and Shimano. The other major change in the bikes this year is the use of Michelin Wild Enduro tyres used and tested by Sam and the EWS team.

There's still no carbon 290 model but there is now a frame only option in both the 275 carbon, alloy and 290 alloy models. 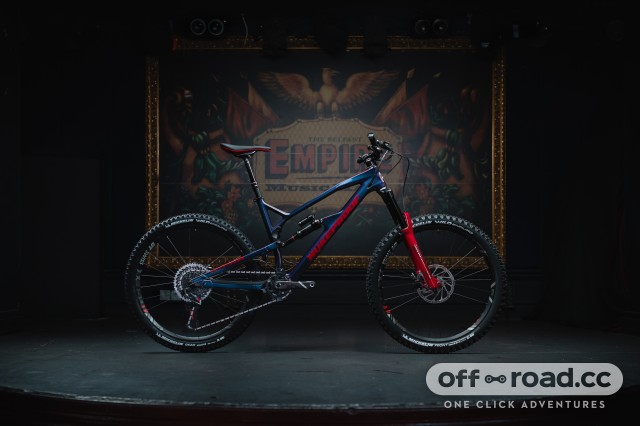 We took a quick blast on this bike on our home trails, check out the First Ride section below. 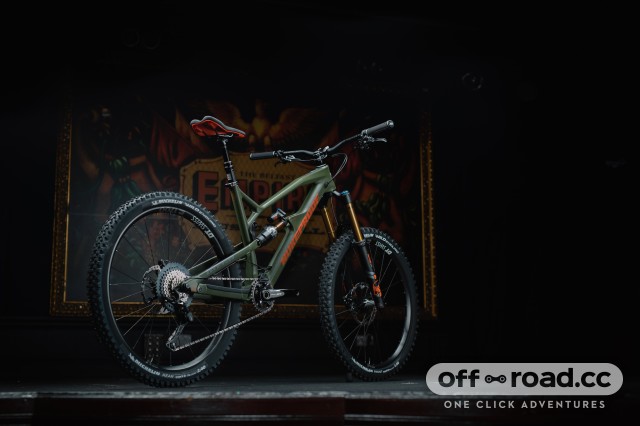 The Mega 275 Factory is a Fox/Shimano build rather than a SRAM one, it gets a Fox Factory Float 36 FIT Grip 2 fork, a Factory Float X2 shock and Shimano XT groupset. 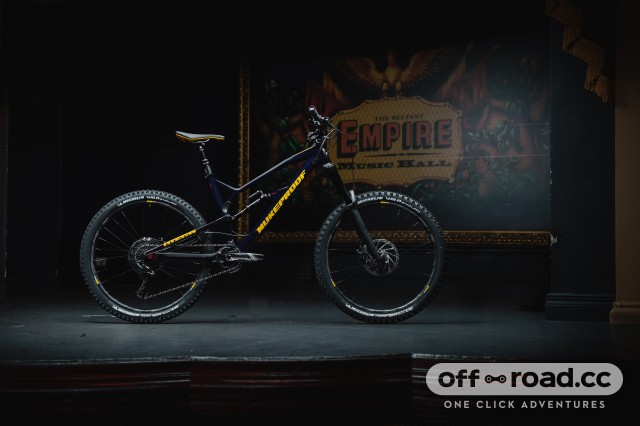 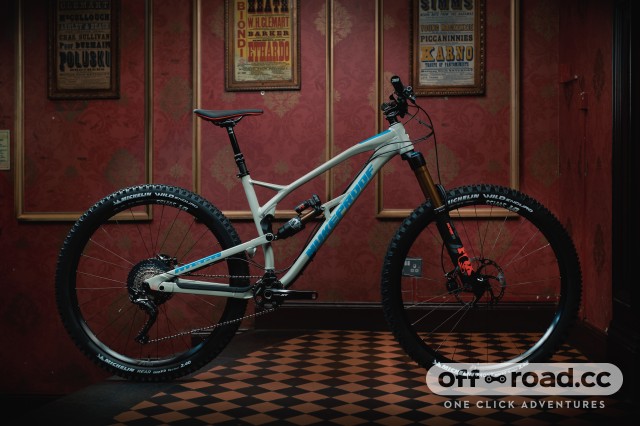 The Factory version of the alloy bike is just available as a 29er, this 290 gets the same Fox build as the 275 Carbon Factory bike, just with an alloy frame. 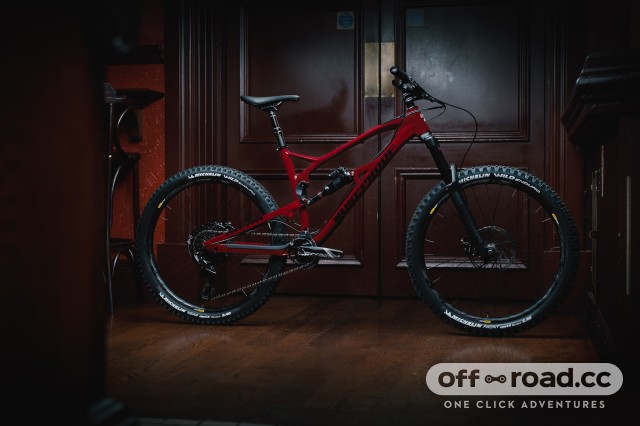 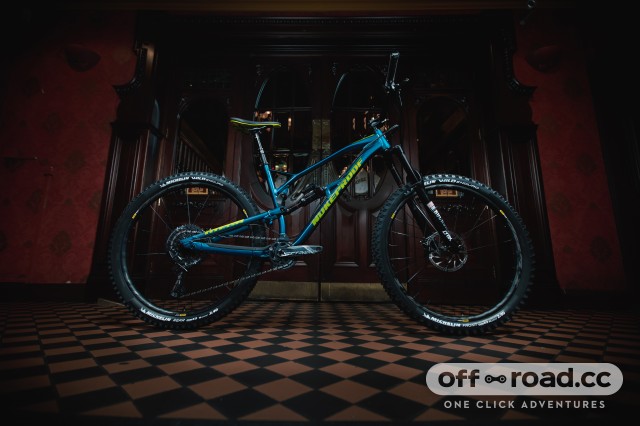 The mid-range alloy 275 and 290 bikes are a SRAM build with a Lyrik RC fork, a Super Deluxe RC3 shock, SRAM GX Eagle and Guide RE brakes. 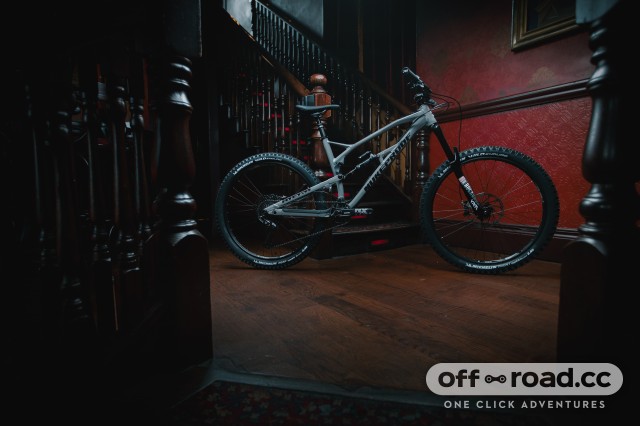 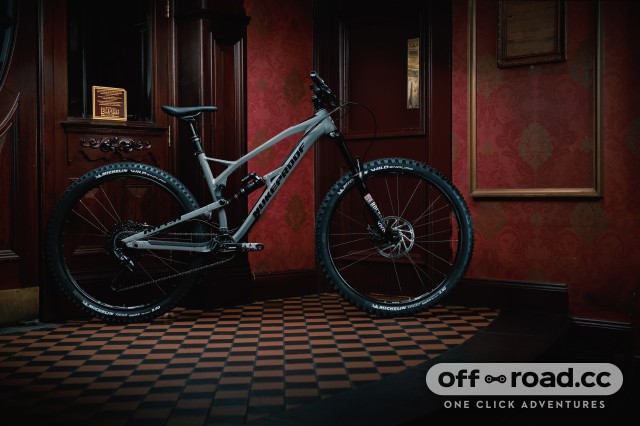 The Mega is also available frame only:

Rachael spent the day with Nukeproof last week and whilst that isn't a huge amount of time to get a feel for a bike you've never ridden before, luckily she was in the Forest of Dean and riding her local trails which she knows better than the back of her hands. Knowing the trails meant Rachael knew just where to take the Mega to give it s good shakedown. 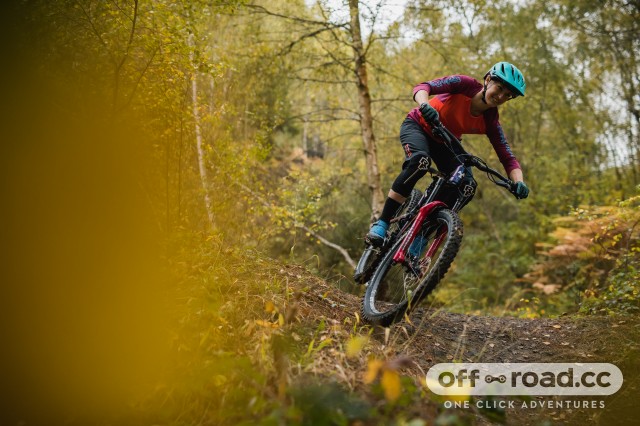 Jumping aboard the Mega and I immediately felt at home, just a quick suspension set up and tweak of the brake levers and I was ready to go. The 'right at home feeling' was something that Nukeproof were aiming for with the Mega, marketing manager Rob told me after the ride, so given my first impression, it appears they have this spot on. 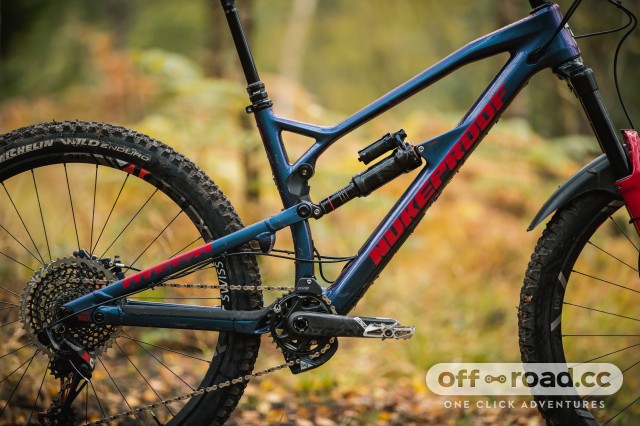 I rode the size medium Mega 275 C RS which is the top of the range carbon bike and one that is well specced for the money. Although the bike has a shorter reach (435mm) than I'd normally choose, the 50mm stem helps give the feeling of more room in the cockpit when seated. Given the relatively short reach on this model, I don't think I'd want to shorten the stem in terms of climbing position but this does mean that I'd have to deal with the trade-off of a less direct steering feel when descending too. Climbing on this carbon bike was reasonably efficient with its 75.5 degree effective seat angle, the suspension did tend to bob about somewhat though, I flipped the climb switch on the Rockshox Super Deluxe RCT3 to solve the problem. 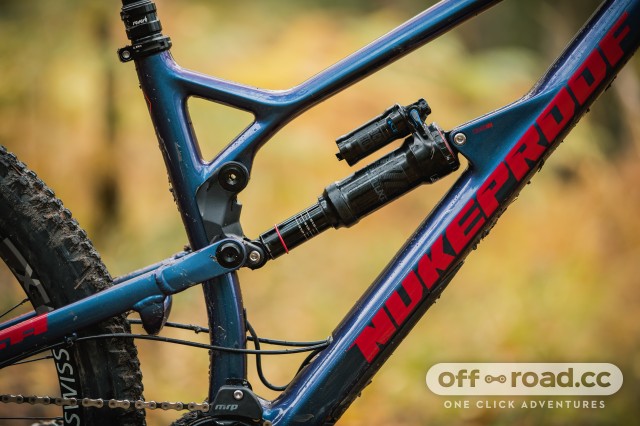 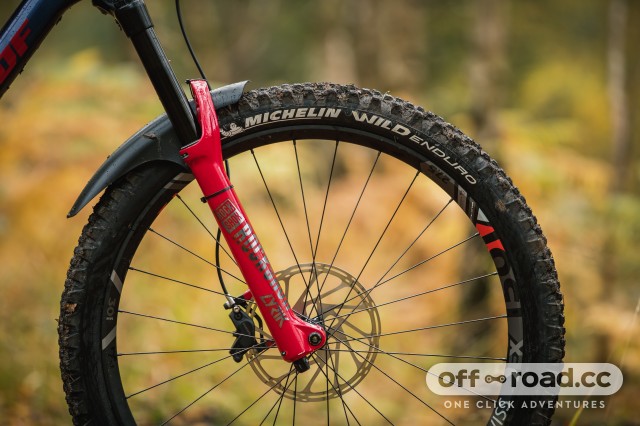 Turning down my favourite trails at FoD and the Mega proved a fun partner, the 170mm Lyrik RC2 is a superb fork and most probably the way I'd spend my money when speccing a bike. It's supple and supportive, complimenting the Mega's capability. With two volume reducers added to the 165mm shock, I didn't quite manage to use all the travel with the bike set up at the recommended 30% sag. It was something I didn't have time to fiddle about with on the day but it would be interesting to remove one (or both) of these, access the full travel and assess the support available throughout the travel. As ridden the Mega rear suspension ate up everything in its path, it was a composed ride and that in itself urges you to go faster. Removing these volume reducers is an easy process, it's great to see Nukeproof include them giving the customer the choice of how many to use without having to go to the trouble to source them. 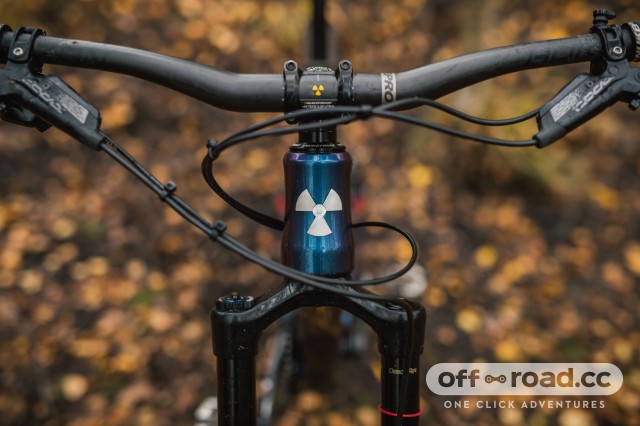 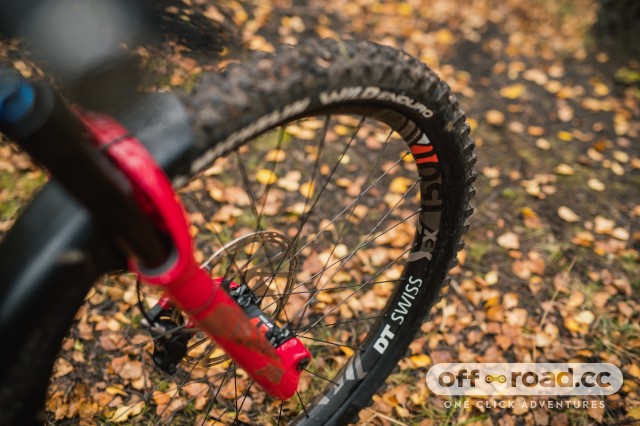 The front wheel is reasonably well raked out too with its 64.5 degree headangle, it's an aggressive, long travel bike, capable of taking on the toughest terrain you can find for it. Although I do wish that Nukeproof had also lengthened the reach on the medium sized bikes when they updated the larger sizes last year. This would make the bike feel that bit more stable when charging hard as it encourages you to do. There certainly seems to be room in the range for a bike between the medium and large, maybe that should be in the pipeline to cover all bases and give the customer the choice on this subjective topic? 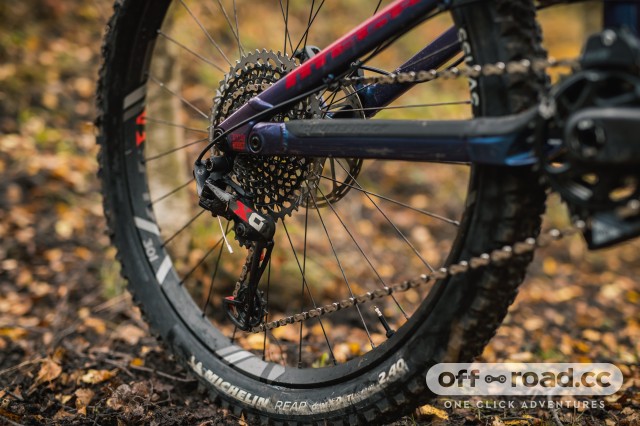 The Mega 275 proved a super fun bike to razz around on, I'm keen to spend more time on something cheaper in the range, such the £2,599 275 Alloy Comp model which looks a solid spec that is ready to ride from the box. 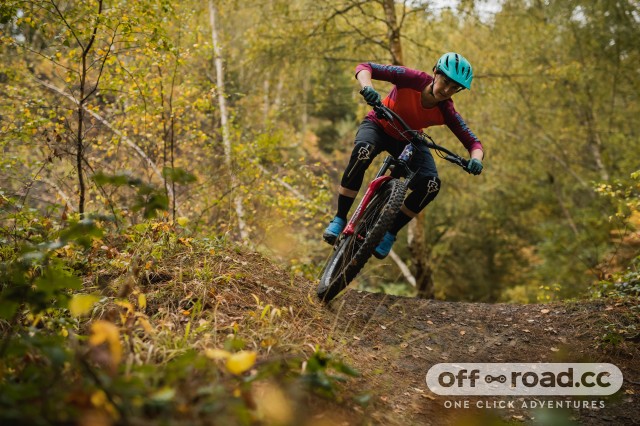 Keep an eye out for a review of the Comp bike in the future and for all the detail on the new bikes head over to www.nukeproof.com 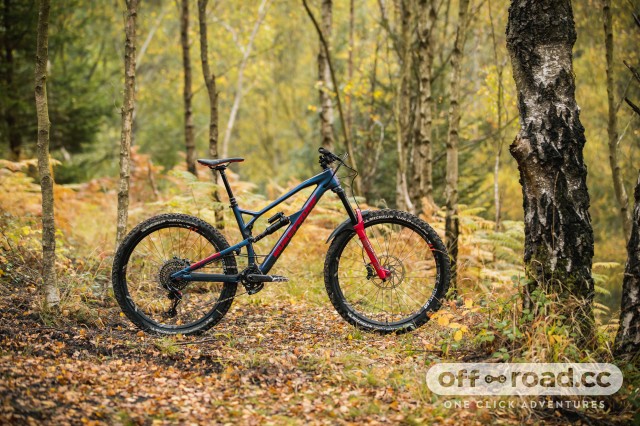