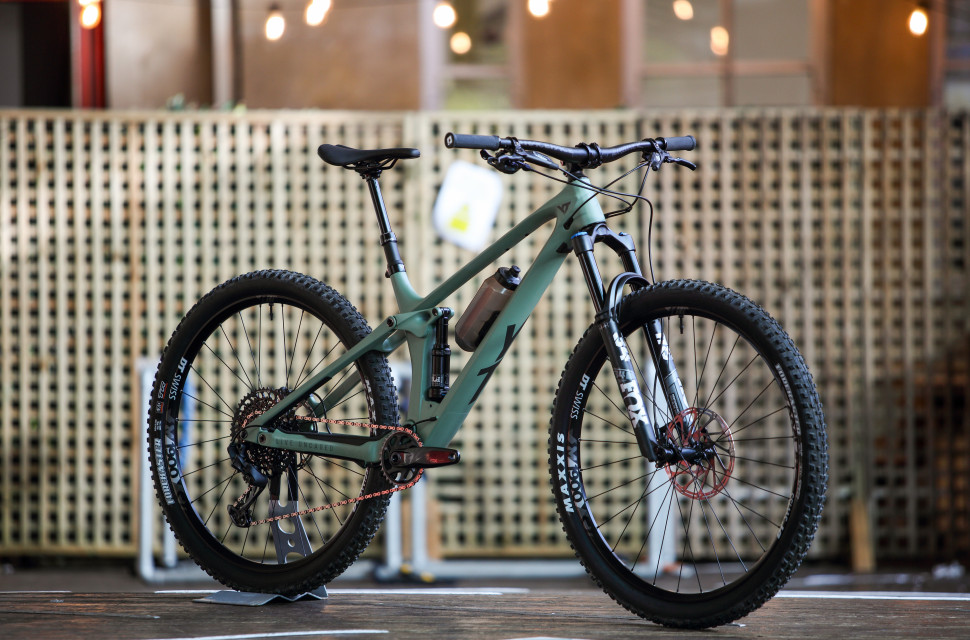 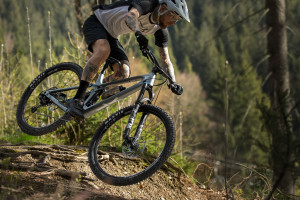 It didn't take too long after the guys from YT visited Off-road HQ (when they showed us the new Jeffsy Uncaged) before they dropped in a bike for testing and it's one we're pretty excited about. We're all rather jealous of Jessica who'll be spending some time aboard the IZZO, YT's short-travel trail, or dare I say it, down country bike for a review coming soon but first, here's a first glance at the rig.

YT Industries IZZO is designed to be your everyday mountain bike without edging into bigger and heavier all-mountain territory. YT says that it's a lightweight bike built especially to shred classic trails.

On test, we've got the IZZO in its mid-range Core 3 build which will set you back £3,900. Just like the rest of the IZZO range, the Core 3 features a full carbon frame. That frame comes sorted with internal cable routing for a tidy look and all of the chainstay protection you could ask for, with the upper and lower of the chainstay getting a coating of rubbery goodness, along with a portion of the seat stay. Hopefully, this bike should be lovely and quiet. 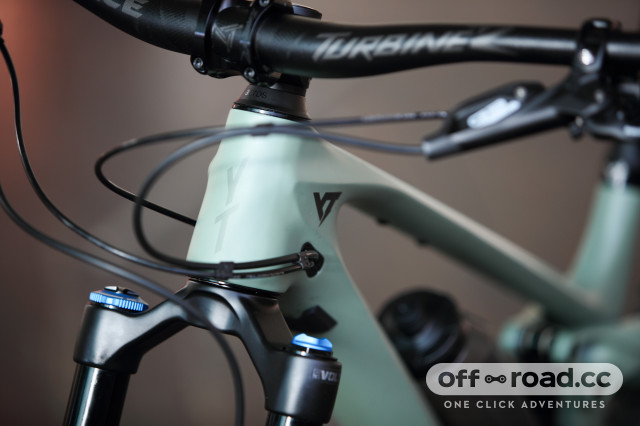 In order to balance durability and weight, the IZZO's frame gets an integrated headset and its surfaces are preformed into the carbon. The ZeroStack design and integrated bearings should mean the bearings will have long service life.

On the subject of bearings, the IZZO gets double-sealed bearings all around and the pivot points get an extra seal to keep crud out and hopefully, make them last a bit longer. Finally, the frame has space for a water bottle, namely the Thirstmaster 5000 835ml FidLock bottle. 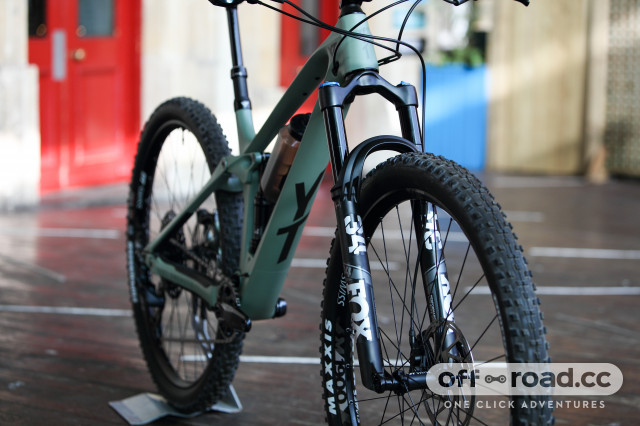 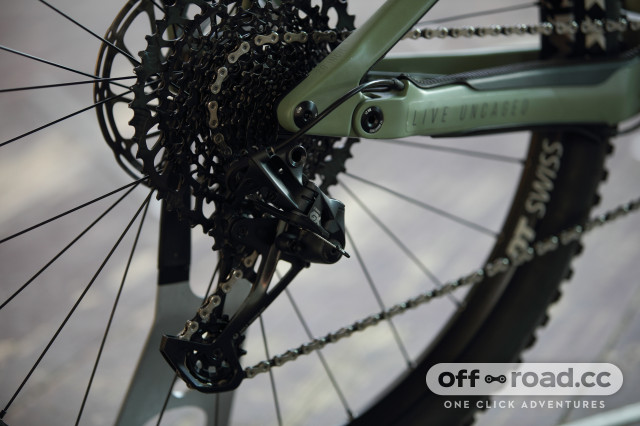 The drivetrain comes from SRAM with the GX Eagle lineup and there's a pair of SRAM G2 R brakes to slow everything down. Perhaps a nod to the IZZO's intentions, there's a beasty 200mm rotor at the front with a 180mm disc out the back. 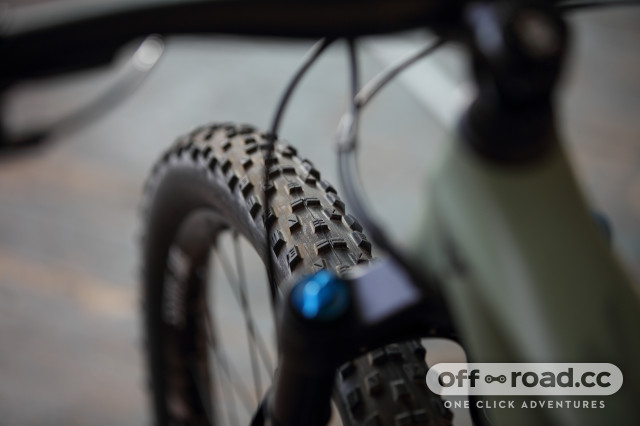 This bike is a 29er and it rolls on wheels from DT Swiss in the form of the M 1900 Splines which get a 30mm internal width and a pair of super racey Maxxis Forekaster tyres. Those come in 2.35" widths, EXO casings, and the brand's Dual rubber compound. 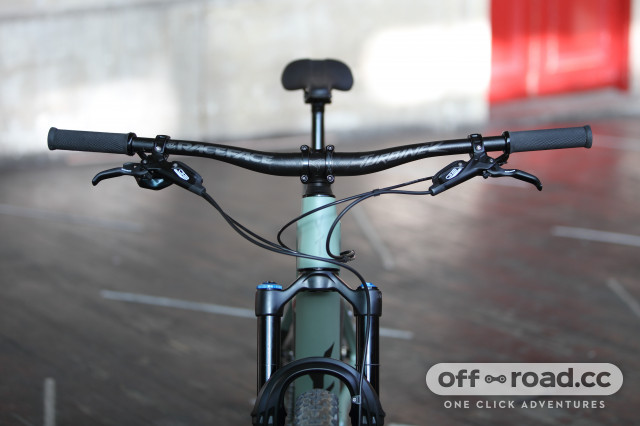 Moving on to the finishing kit, there's a Race Face Turbine R 35 bar and as you might have guessed, it comes with a 35mm clamp diameter for a helping of extra stiffness, then there's YT's own Postman dropper post with 125mm drop on the medium frame and there's an SDG Bel Air 3.0 saddle. All of that is claimed to weigh in at 13.30kg... Not bad.

As mentioned before, we've got the IZZO with a medium frame, which rocks a 450mm reach, then all sizes benefit from a 66° head tube and a 77° effective seat tube angle. The chainstay is a little different here because sizes S to L get a 432mm measurement whereas the XL and XXL's chainstay stretched by 5mm to 437mm. 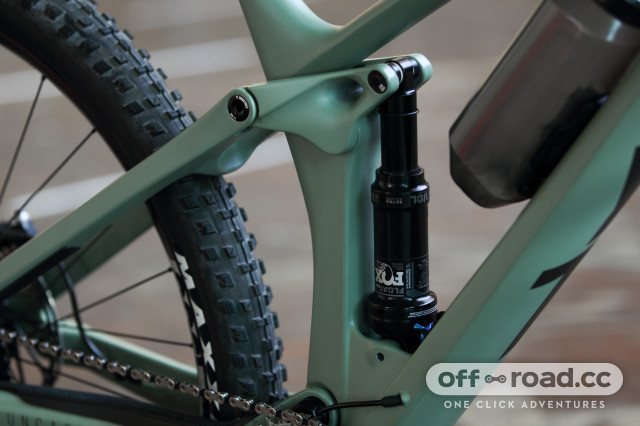 A neat feature is that those angles are adjustable thanks to a flip-chip. Pop the chip in its second position and that'll steepen the head angle and effective seat tube angle by half a degree.

Of course, the Core 3 isn't the only IZZO in the range as at £3,000 is the Core 2 running Fox's Performance suspension and SRAM's NX drivetrain. At top of the range is the Core 4 at £5,000. That one gets Fox Factory bouncers with a SRAM XO1 drivetrain.

We can't forget the current Blaze model either which brings RockShox Ultimate suspension into the mix at the price of £3,600.

So that is the YT Industries Core 3 and now it's up to Jessica to take it for a spin to see if it lives up to expectations. Be sure to keep your eyes peeled for a full review coming soon.