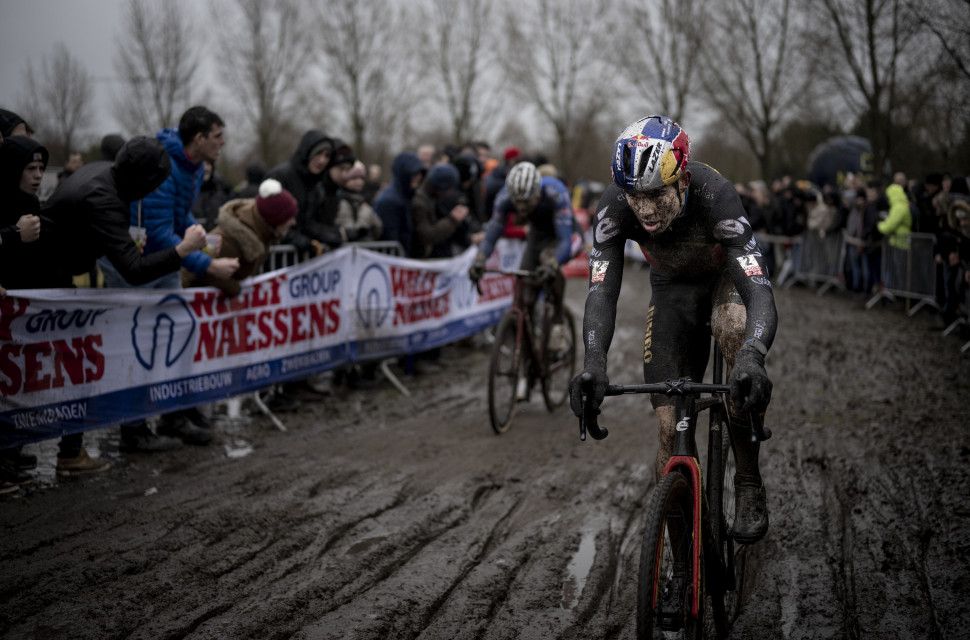 When riders think about off-road cycling with drop handlebars, the association is gravel biking. But there’s another off-road cycling discipline with bikes that feature drop handlebars, which predates gravel riding as we know it by many decades.
We’re referring to cyclo-cross. That brutal winter training discipline that keeps European road and mountain bike pros in shape.

Winter road riding is awful: rain and slippery tar surfaces. Mountain biking isn’t much better, despite the fallacy of muddy mountain biking being fun. Cyclo-cross is the perfect medium for keeping your off-road riding intensity and training commitment throughout winter.

The Dutch and Belgians love cyclo-cross and the discipline dominates most of each country’s events. It’s a consequence of their obsession with riding and lack of topographic diversity. They had to make up for what this European region lacked in mountains and punishing climbs. How? By taking the very mild (nearly flat) landscape, and making it a lot more challenging to ride across: adding muddy fields, cobbled sections and sand to the routing equation.

What is cyclo-cross really, and how does it work? Perhaps most importantly: how is cyclo-cross different from gravel riding, and why do the bikes look so similar, despite being unalike?

Challenging terrain featuring all the obstacles 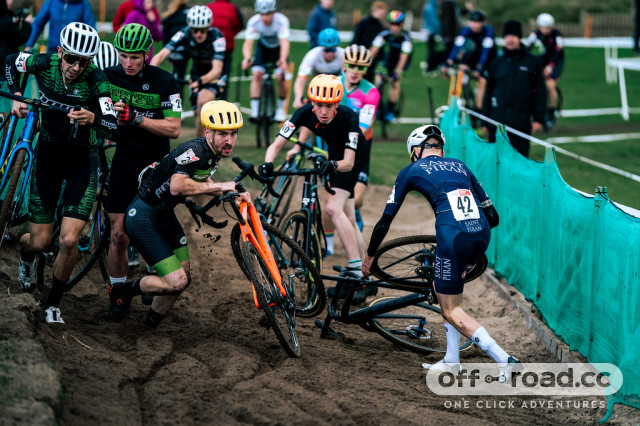 Cyclo-cross is never raced on a completely flat surface. Although the total elevation profiles are very mild, some of a cyclo-cross venue’s climbing gradients can be vicious.
City parks or open fields on the peri-urban edge of development are favoured by cyclo-cross riders and event organisers. The terrain and venues might appear innocuous, but cyclo-cross events are all about disrupting rider rhythm.

Sand traps. Log obstacles. Impossible stairs. These are all features of a cyclo-cross race circuit, designed to ensure that riders are never in a comfortable rhythm or cadence. The races last between 40-60 minutes and are utterly exhausting. Which is what they were originally purposed to be, as a winter training resource for road cycling pros.

What about cyclo-cross bikes? 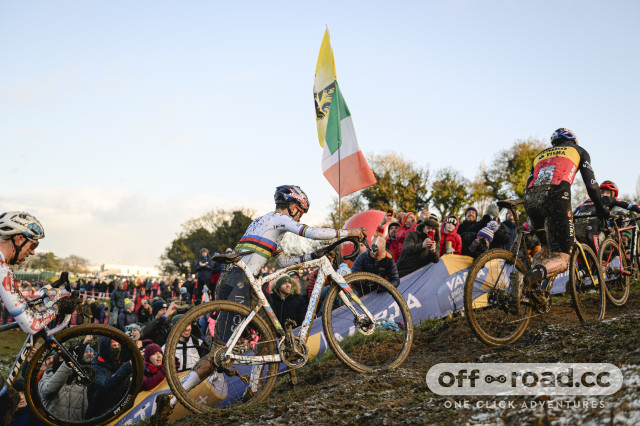 Cyclo-cross bikes look like road or gravel bikes with their drop handlebars but are very far from what you’d ride on a sportive or a gravel adventure riding weekend.

Cyclo-cross bikes are designed to be very agile and good at powering up short, steep climbs. During a cyclo-cross race, the margin and space for overtaking are narrow. This requires a bike that is responsive to the point of feeling nervous.

With comparatively steep head angles and short top tube lengths, cyclo-cross bikes respond with great alacrity to the merest rider input. Although they are slacker and longer than road bikes, the latest generation of progressive gravel bikes is in turn slacker and longer, than pure cyclo-cross racing bikes.

Unlike all other drop handlebar bikes, cyclo-cross bikes are designed to facilitate rapid dismounting and carrying. At the purist of cyclo-cross races, there are stair climbs, often made of stacked logs, which are generally impossible to ride. Riders need to dismount rapidly and run with their bikes. This explains why cyclo-cross frames are relatively compact, with a low standover height. 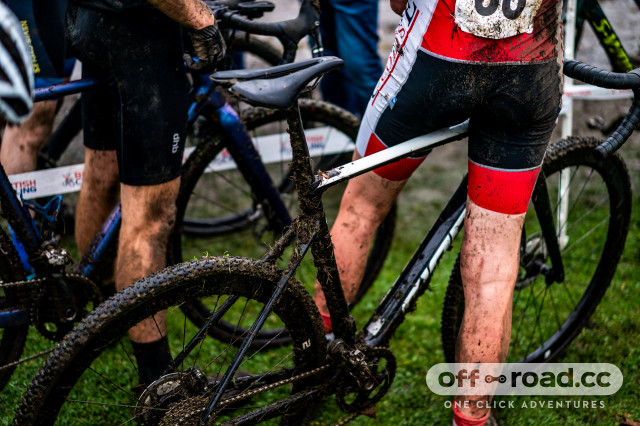 Compared to a gravel bike, the cyclo-cross frame has milder geometry and smaller overall dimensions. The same applies to the tyre width.

There was a peculiar tyre crossover point between cyclo-cross and gravel bikes, during the first phase of the latter’s development. When gravel bikes started to become popular, tyre choices were limited. Even the narrowest mountain bike tyres were too large, which meant gravel bikers used cyclo-cross tyres, but these weren’t large enough, for reasons of officialdom and competition.

Gravel riders quickly realised that 700x33c tyres, about the largest rubber you can roll on an authentic cyclo-cross frame, weren’t big enough. The reason for that is twofold. Firstly, it’s the maximum size that UCI rules allow for cyclo-cross bikes to roll in competition. Secondly, you don’t want to go too wide with a cyclo-cross tyre, because its primary terrain function is to roll across muddy and moist terrain.

Instead, cyclo-cross riders seek the best grip when descending a muddy grass embankment and leaning into that tricky off-camber corner. For that purpose, you want a slightly narrower tyre that ‘cuts’ into the riding surface, finding the available grip below the terrain crust in very moist riding environments.

In a UCI-sanctioned cyclo-cross event or national trophy race, the maximum tyre width is pegged at 33mm, which can grow to 35mm or 38mm in regional races in the UK.

Why are cyclo-cross cockpits narrower than gravel bikes? 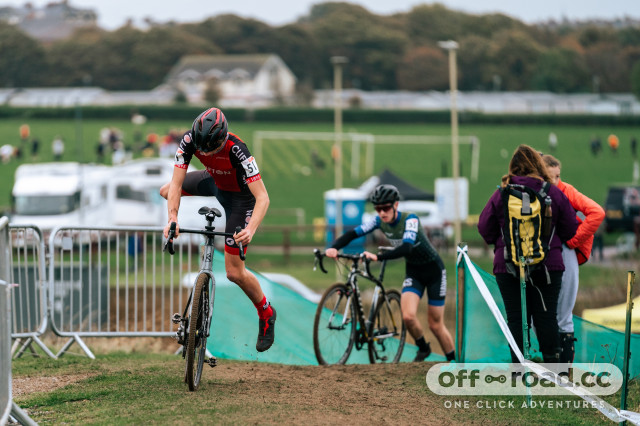 Cyclo-cross bikes have more compact frames and smaller tyres than gravel bikes, but what about the other points of differentiation?

Cockpit dimensions are one. Gravel bikes feature the widest drop handlebars in production. Some of these bars reach widths close to those of cross-country mountain bikes, around 660mm at their narrowest. Not to mention the extreme geometry of those drops, which flare radically at the drops.

Cyclo-cross handlebars are closer to traditional road bikes. Owing to the foundational rationale of cyclo-cross being an intense racing format, with riders bunching and manoeuvring close to each other for position, narrower handlebars are safer with less likelihood of ‘hooking’ other riders. They also allow riders to get closer to each other when positioning for that overtaking opportunity into a corner.

Should I start cyclo-cross riding and racing? 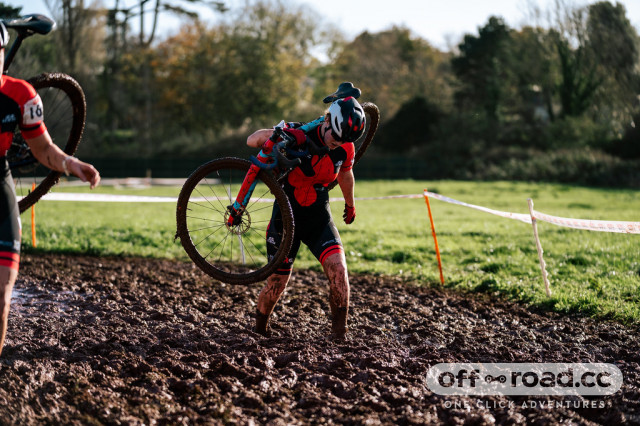 Before the advent of gravel bikes, the only drop handlebar option for off-road riders was a cyclo-cross bike. But it's a waste if you aren’t using one for its dedicated purpose of racing on authentic cyclo-cross circuits.

Gravel bikes are better as general all-terrain winter riding machines. Cyclo-cross bikes aren’t that great for long road rides as the geometry is designed for intense sprint racing riding postures and is tolerable for perhaps an hour, at best. Beyond that, depending on your flexibility, fitness and ability to suffer, you’ll dislike the cyclo-cross geometry and associated riding position. It can turn that mild-cadence 100-miler weekend road ride into a cramping Sufferfest.

If you commit to the intent of true cyclo-cross riding (high-intensity mid-winter training), and it will provide a continuum of riding fitness between summers, unlike anything you’ll accomplish on the indoor trainer. Mastering the handling dynamics of sliding and cornering a cyclo-cross bike along that muddy, grassy, sandy and cobbled race venue has significant benefits for your general cycling skills.

Cyclo-cross at the lower levels is also one of the most accessible cycle racing disciplines. Many of them include a category which everyone can enter - even on mtb if you wish - and is simply about building up your fitness and skills and having plenty of fun. Your gravel bike with the right tyres will get you far in these kinds of races so there is no need to invest in a new bike right away unless you know you want to proceed to the national-level events.

So if you want to save a lot of needless mechanical wear and maintenance cost on your mountain bike throughout winter? Channel that inner Flandrien and become a cyclo-cross rider.