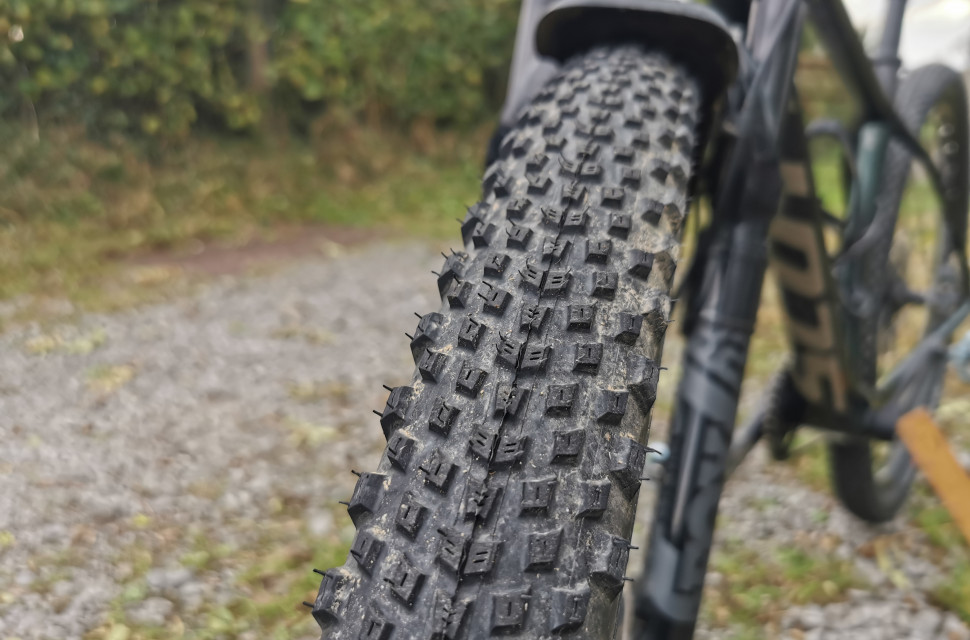 The Scorpion XC H is aimed at fast, dry conditions featuring a low-profile tread pattern with an unusually strong and durable casing for a cross country focussed tyre. It offers a limited amount of grip when things do get damp and slippery but they remain controllable enough not to be too scary.

The Pirelli range of tyres continues to expand and now has five different cross-country models. The XC H is designed for hardpack terrain and is aimed towards riders where low rolling resistance is the key factor. It’s available in 2.2” or 2.4” sizes with the option of a 120 TPI Lite or ProWall carcass, the latter features an extra nylon layer on the sidewall for increased protection.

I’ve got the 2.2” ProWall on test with a claimed weight of 690g but actually tipping the scales at 760g, which is a significant chunk over its claimed weight and puts the tyre at the higher end of the weight scale for minimal treaded, cross-country tyres. The Lite version is claimed to be 50g lighter. In comparison, the Vittoria Terreno came in on weight at 650g and the Wolfpack Speed at just a few grams over the claimed 600g weight.

Installation, mounting, and inflation were simple with no need to look for a compressor which is always a pleasant start. Once inflated to rims with 25mm internal width, they came in at 2.26” wide so no issues there. 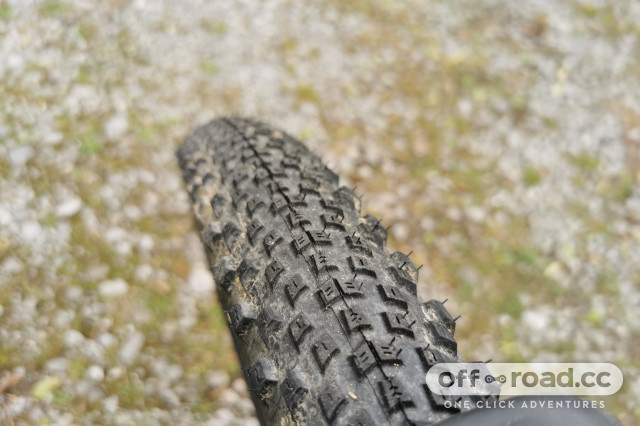 The Scorpion XC H tread pattern is made up of closely spaced low profile knobs of equal height across the full width of the tyre giving a clear indication of what type of terrain and style of riding they are aimed towards which may seem limited in the UK given our changeable weather conditions.

On the dry trails, which the Scorpion XC H is designed for, the amount of grip is exactly what you might expect with the ability to corner quickly with dependable traction. The only area where grip is limited in the dry is under braking with the rear tyre frequently locking up despite my best efforts to modulate the brakes to prevent this. The front tyre was less of a problem thanks to its low-profile tread providing enough traction to slow you down.

When riding on wet Welsh trail centre tracks with generally firm rocky terrain, traction, or rather the lack of it, became more of a problem than just under braking. Whilst I managed to climb every hill I attempted, several hills were a slip-grip affair.

On faster sections care is needed, at least initially, with cornering as the front tyre can slide out on the muddier sections due to the small tread size, the shape, and the tread pattern across the tyre. However this loss of traction is predictable, and once accustomed to it, I gained confidence with the front wheel slide and I started to enjoy the tyres more.

While this tyre is designed for hardpack, at times I was unable to avoid muddier tracks (it’s not all sunshine and dusty trails in Wales) and they do struggle in thicker mud. The front suffers a loss in traction under braking and cornering forces, whereas the tread on the rear clogs quickly. This is to be expected as ultimately they are not designed for these conditions. 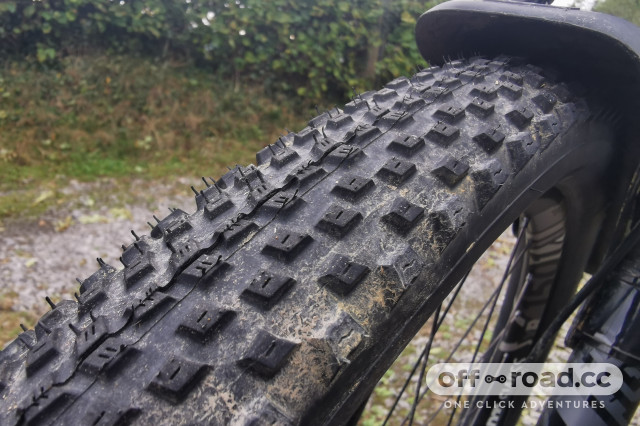 One big positive is how smooth and quiet they roll on all surfaces. While they don't quite feel as fast as some of the very fastest tyres recently tested, including the Vittoria Terrano or Wolfpack Speed, they do still roll rather quickly. Another benefit is the ProWall casing, which has remained strong and puncture-free on all rides to date. As strong as it is, it still feels supple despite that extra nylon layer in the sidewall, which helps transmit more feel back to the rider with the higher 120TPI casing perhaps having some effect.

Despite a dry spell during early testing, Autumn has now kicked in meaning that a chunk of the time testing has been in changeable, damp, and at times wet conditions. As a rear tyre, it copes better with these conditions and would be useable for more of the year. As a front tyre its use will depend on where you live with local riding conditions and weather playing a large part in how long you can use it for. It would perform well as a long-term option for drier spots of the UK, but in Wales at least, it’s best kept at the front of the bike.

Overall the Scorpion XC H is a strong and dependable tyre that works very well in dry conditions and while they are more limited in muddier, wetter tracks they still feel quite controllable. Although, for a cross-country tyre, the weight is quite high and substantially more than claimed, which may put off some racers who keep an eye on kit weight.

Pirelli say: Low profile and compact tread pattern for riding quickly and confidently over hardpack terrain. The Scorpion™ XC H is the best choice for XC and Marathon courses where speed is the key factor.

Pirelli list: Tread The pattern tread of Scorpion™ XC H is made up of low, densely packed knobs with reduced height to increase speed and limit deforming when cornering on hardpack terrain. Single compound SmartGRIP Compound is an advanced compound developed using motorsport experience. The single compound provides constant high grip performance both in wet and dry conditions, even when the tread starts to wear. ProWall ProWALL sidewall reinforcement technology increases puncture protection and improves handling at low pressures. An additional layer of Nylon fabric is applied over the casing sidewalls for extra protection and improved cornering stability.

Great on dry trails, especially sandy/dirt tracks but more limited as trails get wetter and especially trail centres with wet rocks and bits of mud.

Quite a bit heavier than claimed and even the claimed weight is not that impressive for a tyre aimed towards racing.

For those who are hard on tyres and often puncture, yes.

Overall the Scorpion XC H is are strong and dependable tyres that work very well in dry conditions and even when things do get wet they feel controllable on the limits of traction. For a cross-country tyre, the weight is quite high and substantially more than claimed, which may put off some racers who keep an eye on kit weight.