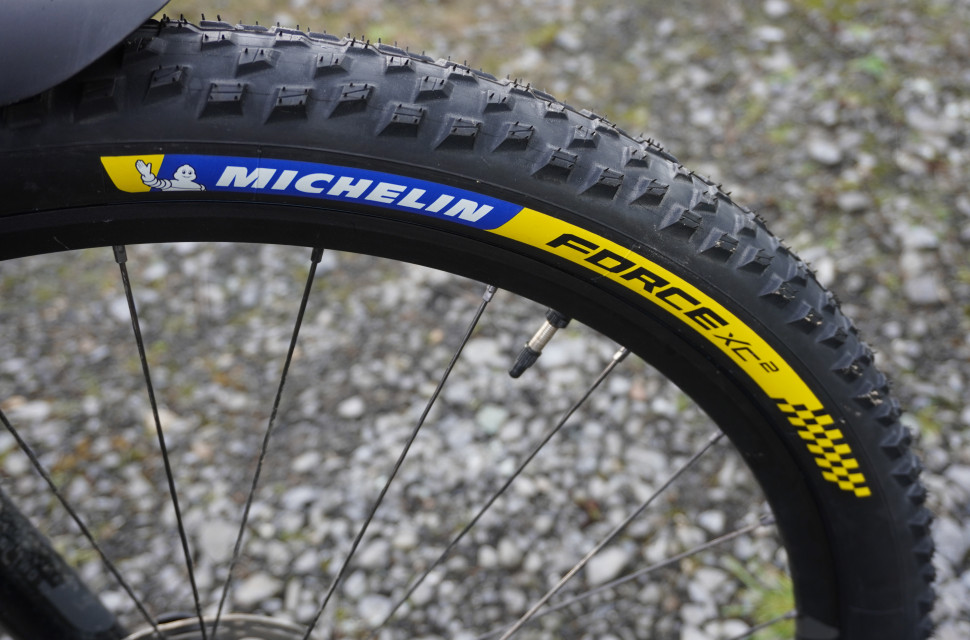 The Force XC2 is a cross-country tyre from Michelin offering a versatile all-rounder, with an open, wide-spaced tread pattern and low depth to maintain speed. It is far from the perfect all-rounder, only partly succeeding, as traction can be an issue on some surfaces and conditions.

Michelin has recently updated their cross-country tyre line-up, with the dry weather Jet XC2 (that we have already tested), and the Wild XC, designed for more aggressive riding, or unfavourable conditions. The Force XC2 sits between them and is available in 2.1” and 2.25” versions. The larger size is what we have on test.

Our pair weighed in at 722g and 719g, just a little above the claimed weight, but a weight that makes them comparable to other cross-country tyres. 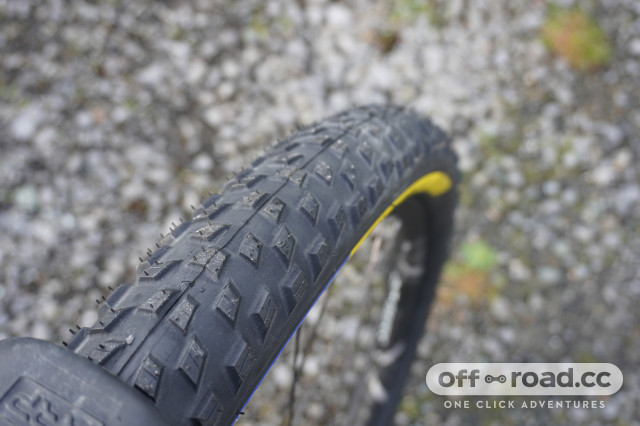 Mounting the tyres was easy. I didn't require tyre levers and could still inflate tubeless with just a track pump on a pair of aluminium DT Swiss rims.

Michelin calls the tyre carcass Cross Shield 2. It features a 3x60 TPI main construction with an additional high-density fibre protective layer. The lower part of the sidewalls features two extra layers of 150 TPI fabric, which should help increase the stability of tyre walls.

The Force XC2 tread pattern is an open design with predominantly trapezoid blocks. The depth of the tread remains constant across the whole carcass, which makes for a very rounded profile.

I found that the low height and wide spacing resulted in traction issues on certain surfaces. On looser dirt and stone the front was prone to drifting, and the rear struggled with grip under acceleration and braking making it really hard to avoid skidding. The carcass does feel quite supple, but this doesn't translate to masses of feedback to the hands and this only impacts confidence further. 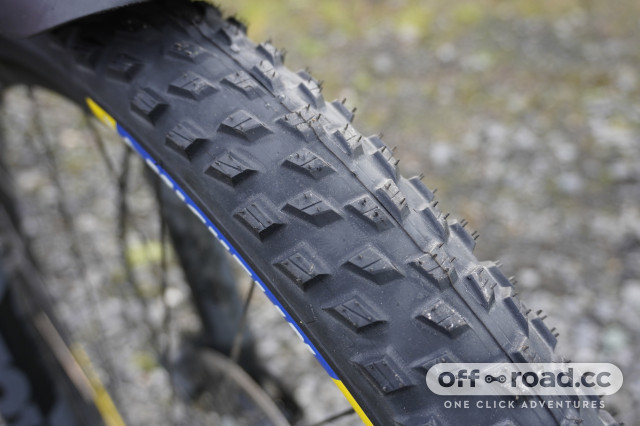 In wet weather, or on slippery, muddy terrain there is little improvement. The tyre can feel like it is drifting through the corners. The widely spaced tread should, in theory, make for a tyre that can clear mud faster but the tread blocks are so low that this doesn't seem to happen.

During testing, I had no issues with punctures or damage to the tyre carcass, but it does share the same carcass design as the Jet XC2, a tyre I had a catastrophic failure with whilst testing, so it does leave some uncertainty over the durability of the tyre.

The Jet XC2 impacts the perceived performance of the Force XC2 within the Michelin tyre range. Although the Jet XC2 is designed for drier, faster riding, it trumped the Force on speed and even grip in almost all conditions. There are times and surfaces where it does work well. It copes best with loamy, soft soil where there is no mud or slippery conditions. 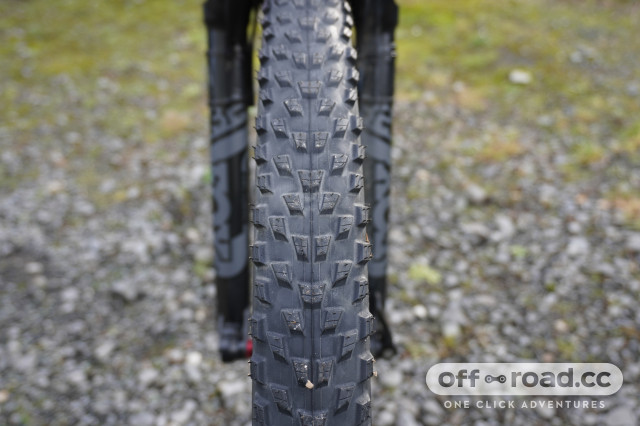 While the Force XC2 is designed to be a versatile tyre, I found it delivered a sub-par performance across a range of surfaces and conditions. While it is not a poor tyre, there are many tyres that can outperform it in specific conditions and across a wider spectrum.

The Force XC2 costs £58 per tyre, which makes them quite expensive, especially for a single compound tyre. Other similar options include the Schwalbe Rocket Ron, with the 2.25” Super Race version at a claimed weight of 680g, costing £56, and some cheaper alternatives including the Vittoria Saguaro TLR at just £35.

While the Force XC2 does work well in certain conditions, it isn't the versatile, all-conditions tyre that Michelin suggested it might be. When comparisons are drawn against other tyres, including the Jet XC2 in the Michelin line-up, there are faster, gripper and more durable tyres available for a similar price, or less. While the Jet XC2 was a tyre I was impressed with, the Force XC2 did not have the same impact.

Questions over the puncture protection and carcass

OK, but there are some options 50-100g lighter with similar or better performance.

On a par with similar tyres, but not exceptional.

The Force XC2 offers reasonable performance, but I found it lacked traction on various surfaces and there are no areas where it really impressed when compared to the competition.

They were easy to mount, and some elements of the performance might have been viewed better had I not ridden the Jet XC2 prior.

The grip is no better, and at times, worse than a dry weather focused tyre with no benefit.

The Michelin Force XC2 can't quite live up to the versatility claimed by Michelin. It offers reasonable speed from the low height of the tread design, but traction suffers on acceleration and braking and cornering traction only really works well in certain conditions and surfaces.