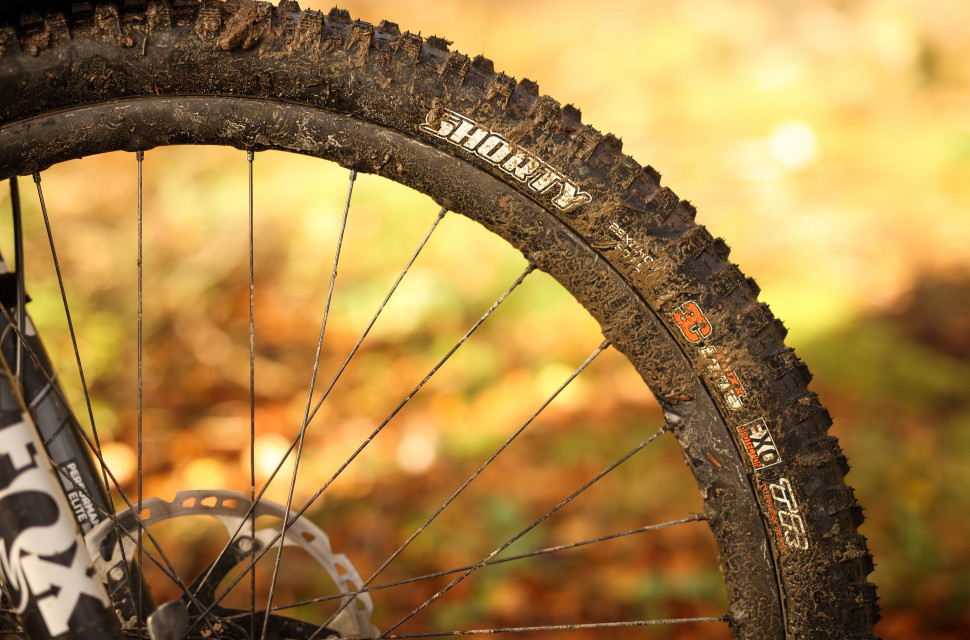 Liam Mercer
|
Dec 2 2021
|
Overall
Quality
Performance
Value
What's good?
What's not?
Buy if...
You're after a fit and forget tyre for soft conditions

Maxxis updating the Shorty came as quite the surprise as the original had firmly cemented itself as a go-to tyre for winter riding for tonnes of riders out there. However, the update has made the Shorty Gen 2 a much more winter focused tyre, sacrificing a smidge of versatility for all-out grip and confidence in soft conditions.

After six years in service, the Maxxis Shorty, which is still available, was put under the scrutiny of pro EWS riders to develop a new, refreshed tyre. The changes that the Shorty Gen 2 has seen aren’t exactly subtle, and they mostly come in the form of wider spaced knobs. For example, the chunky centre knob on the original tyre has drifted apart into two knobs. On the carcass, super short ridges have sprouted, intending to aid mud clearance. 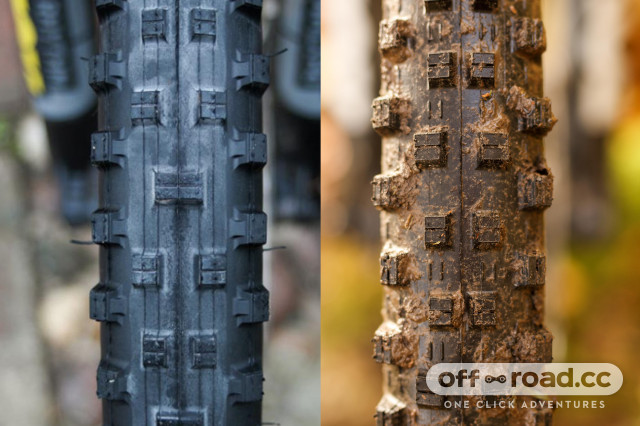 The shoulder knobs have received more support in the name of cornering grip, and the siping all-around has been revised to offer better traction under braking.

The new tyre comes in a 2.4" width in either 29" or 650b wheel sizes with 3C MaxxTerra and MaxxGrip compounds. I can hear people screaming for wider widths, but the choice for a 2.4" has its reason as Maxxis reckons it increases frame and fork clearance for mud while keeping weight reasonably low.

We've had a 29" Shorty Gen 2 on test with the firmer MaxxTerra compound, which tips the scales at 1,076g.

Maxxis Shorty Gen 2: How it rides 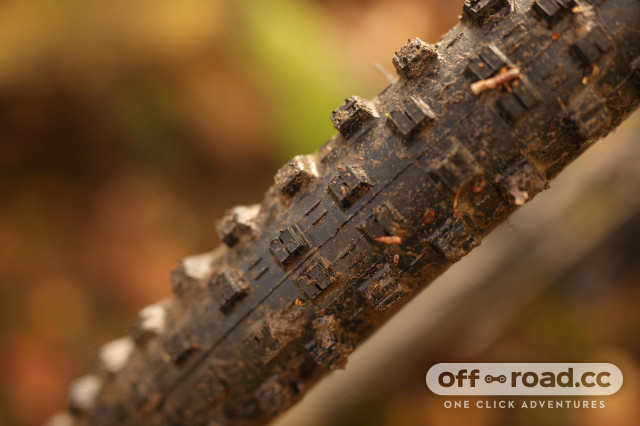 It comes as no surprise for a soft-conditions tyre that the tread is pretty aggressive. Those widely spaced knobs are reasonably tall, and there’s little ramping. The shoulder knobs get even taller, and of course, they get that extra support.

To my surprise, the first benefit I found with Shorty’s redesign is that its rolling resistance is noticeably better. It’s definitely a bit draggy compared to a DHF and the likes, but it’s a lot more tolerable now than it has been before. Usually, I might slap a more all-around tyre upfront to keep pedalling easy, but the Shorty’s improvement in this area makes it a much more viable option for all-winter riding, not just for when the slop is serious.

My time running the Shorty Gen 2 has seen many conditions; some hardpack, loam and mud were thrown in for good luck. There’s not really been a day I’ve ridden with the new Shorty where the conditions have been consistent, so I’ve really come to learn where the tyre excels and where it gets a little iffy. 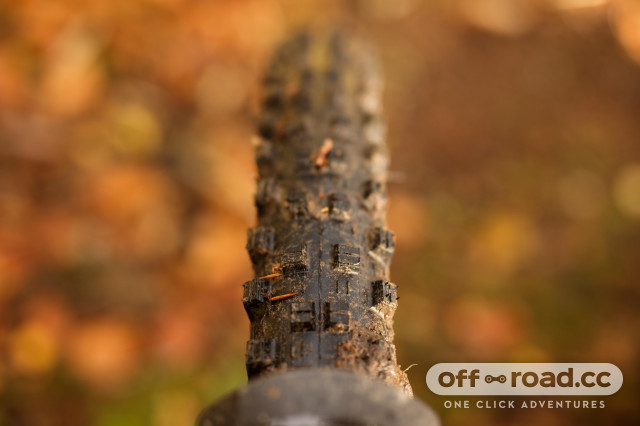 The tyre gets unsure over hardpack or any kind of hard condition where the aggressive knobs can't bite into the ground, but that's totally understandable as the tyre simply isn't built for that. However, if you can live with a lighter and more nervous feeling in the front, the grip remains surprisingly predictable. I've managed to tackle harder trails without any real dramas, just slower and with less confidence.

Of course, if you mostly ride harder surfaces, you'll find better performance out of less agro tyres, but it's reassuring to know that the tyre can perform in these sections.

It's when the trail gets soft where the Shorty Gen 2 really comes into its own, and rightfully so. Each of the tyre's updates has made the Shorty Gen 2 an absolute grip beast. It's surprisingly capable over roots, too, allowing you to totally rethink lines that would be particularly dodgy in the wet.

The tyre has filled me with confidence in areas where I would usually hold back on other tyres simply because it hangs on. I've only lost grip once, leaning the bike a little too much around an off-camber turn, more of a user error above any issue with the tyre.

Even with the open block design, the tyre feels consistent as it's leant. I've not found any noticeable dead spots when used in the right conditions. Of course, the tyre is rolling on top of its tall tread over harder trails, which is why it becomes nervous, but that problem fades as the ground softens.

While those updates have noticeably improved the tyre's capabilities in nastier conditions, braking has also received quite a boost in performance, becoming stronger in that area.
So, the combination of the Shorty Gen 2's all-out capability in muddy conditions and surprisingly predictable (if impaired) grip over harder trails makes for a solid tyre when things are truly mixed.

I've been able to ride quickly and confidently through loamy routes that have a peppering of hard portions will full confidence, and as I approach those patches of hard, I've not felt the need to reach for the brakes or alter my riding.

I suppose the only real downside to the Gen 2 Shorty is that it only comes in the 2.4" width. As mentioned before, Maxxis offers this tyre in the one width to offer more mud clearance, but because it sheds mud so well, I reckon the brand could get away with providing a slightly fatter tyre. However, I don't think it'll cause that much disappointment in its current guise as it is a very impressive performer in all manners of soft. 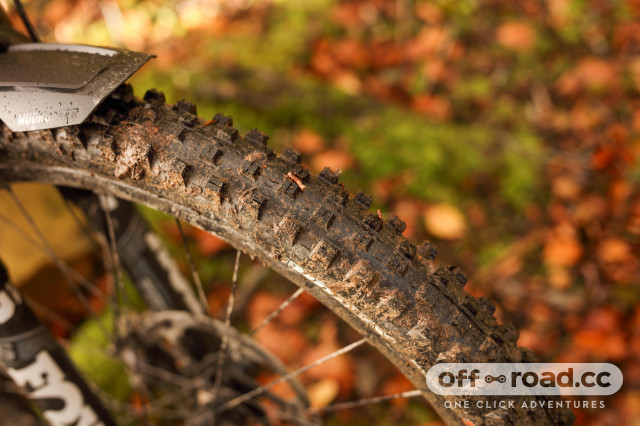 That downside is ignoring the Shorty Gen 2's price. It'll set you back £70, and that's at the top end of what you can expect to pay for a tyre. An alternative to the Shorty 2 is Specialized's Hillbilly, which scored rather well in our review. At just £45, Rach said the Hillbilly provides excellent grip in wet conditions, and its compound works pretty well on rock too.

While not exactly a winter-specific tyre but a very capable tyre in the wet nonetheless, there's the Schwalbe Magic Mary at £65. It's more of an all-around tyre, so it won't be as dependable in the seriously soft and wet stuff as the Shorty Gen 2, but it'll keep you rubber side down if your trails edge towards a drier mix of conditions.

The Maxxis Shorty Gen 2 remains an excellent go-to tyre for wintery conditions. While performance understandably lacks over harder trails, it comes to life and gets to work when surfaces soften, making for a tyre you can put confidence into in conditions that'll persuade you otherwise.