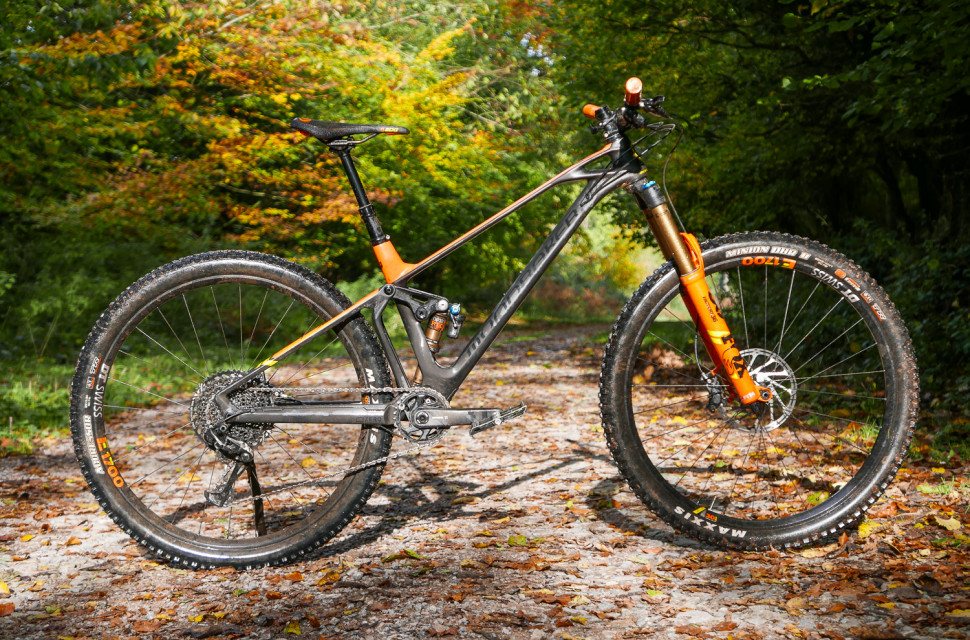 Mondraker's Foxy Carbon 29 RR offers a lithe feeling carbon fibre chassis with well-sorted geometry though it doesn't feel like quite as much as of a flat-out slugger as some 150/160mm bikes. The price is also high considering there's some low-rent kit in places, but it's still a fast and fun long-legged trail bike capable of handling itself in the rough.

At the heart of the Foxy 29 is a rather sleek and well-proportioned carbon fibre frame, but as ever, Mondraker's calling card is the long-reach, short stem Forward Geometry. It doesn't look as radical as it once did, with many rivals now using similar numbers, but it still provides a superbly stable platform and top-notch handling once you get used to the need to weight the front end.

The bike sports 150mm of rear-wheel travel from the multi-link Zero suspension system, while up at the front there's a 160mm of bounce on offer. The bike gets Fox Factory units at either end, the piggyback-equipped DPX2 at the back and a FIT4 damper equipped 36 fork. 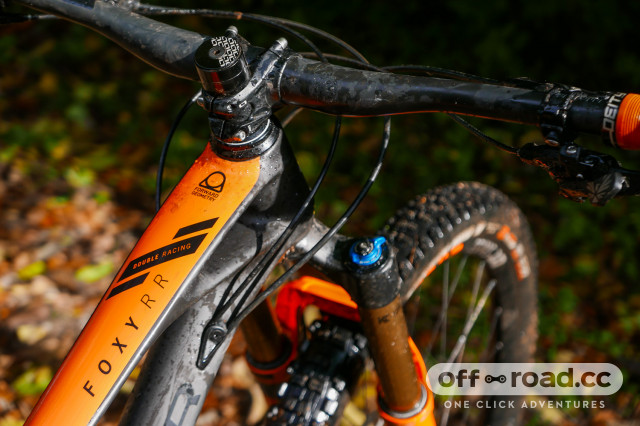 While that seems like a fair chunk of travel, the Foxy feels much more like a lithe and fast longer-travel trail bike than a heavy-duty rock smashing enduro slugger. There's a touch more anti-squat in the rear suspension setup compared to the now discontinued 650b wheeled Foxy Carbon I previously tested and that shows in the way the bike pedals, with superb manners when you're getting on the power.

The trade-off is that it's not quite as plush and supple elsewhere, though there's a good amount of progression to the rear suspension and there's good support throughout the travel that allows you to gauge traction. The length of the bike really helps here - it's naturally disinclined to be knocked off like, something the give in the relatively slender frame tubes helps. 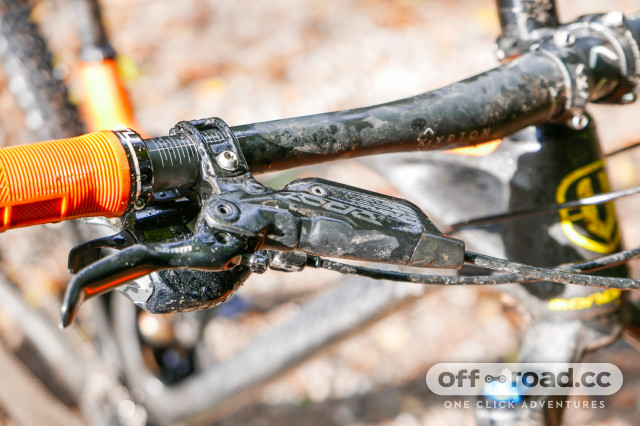 The frame is no flexy noodle but it's not as overbuilt as some and the chassis feels forgiving ride feel when you're chattering over rough ground. I personally prefer that to a super hard, harsh and precise bike that'll twitch from one thing to another, but super hard or heavy riders should probably be looking at the longer-travel Super Foxy for their thrills. 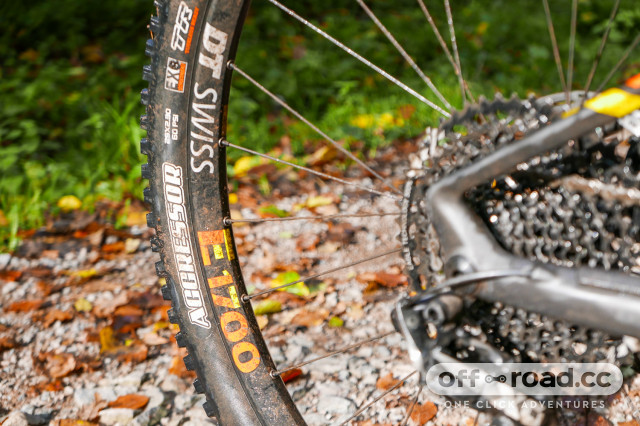 While the Fox suspension is top-notch and the 12-speed SRAM X01 and GX Eagle drivetrain mix works well, it does feel like corners have been cut in some other areas, with the own-brand dropper post being one example. It's a perfectly functional unit that was entirely reliable during the test period, but when you're spending this sort of money you'd have a right to expect something branded - and longer travel than 125mm - from the likes of Fox or RockShox.

It's a similar story with the wheelset, which is from DT Swiss. The E1700 rims are tough, tubeless ready and have a spot-on 30mm width but the freehub uses a lower engagement count ratchet than DT's higher-end offerings, which is noticeable when you're trialsing it through sections. 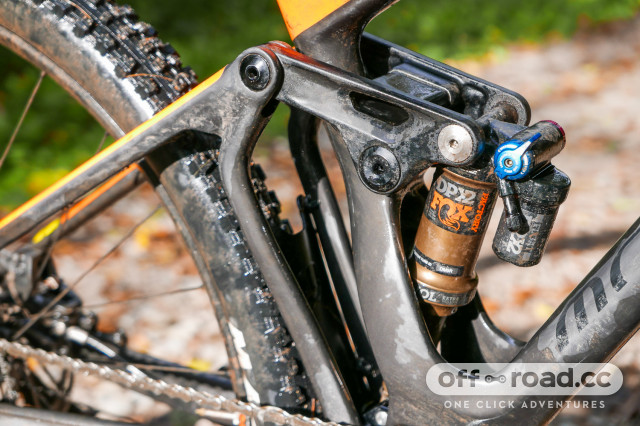 The same goes for the SRAM Code brakes, which get a 200mm rotor up front and an 180mm item at the back. They're prodigiously powerful and offer decent feel but they're the entry-level R spec units rather than the more adjustable higher-end items. Functionally, they're fine, as is the own-brand carbon bar and grips - it's just that some of it feels a bit cheap at this price. 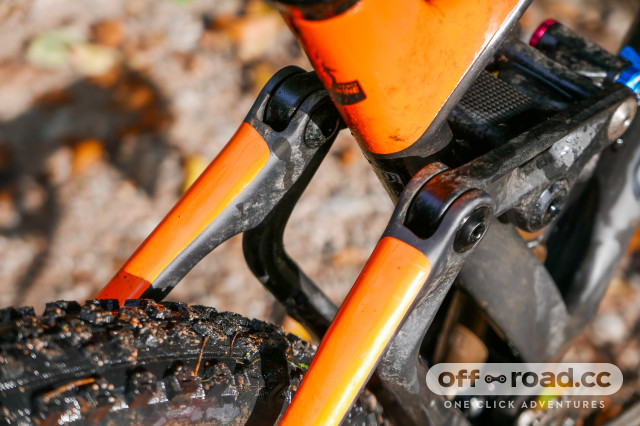 Still, when you focus on the ride rather than the kit, the Foxy Carbon delivers the goods. While shifting your weight a bit further forwards is needed to prevent you from washing out, it's not as drastic a change as some would have you think and it rewards you with renewed confidence, grip and capability, especially on steeper or rougher terrain.

The extra length in the bike means you're less likely to be punted too far forward or backwards when the gradient changes or the grounds starts knocking you about, allowing you to focus on picking your lines rather than just holding on for dear life. 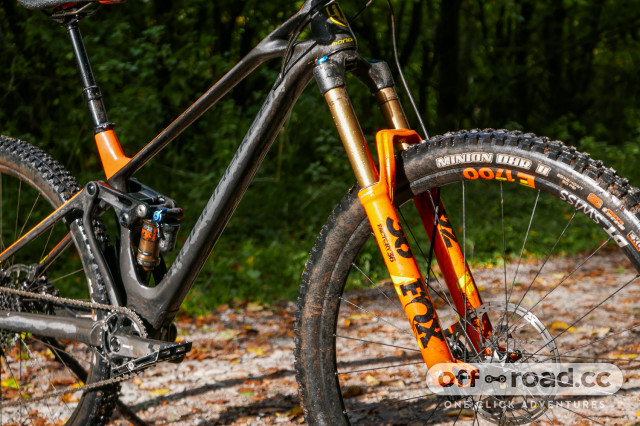 I can't say that I can really detect any great loss of agility in tight corners or switchbacks with the extra length of the bike - assuming you remember that you can now confidently weight that front tyre hard rather than hiding over the back of the bike. The 'they don't go around corners' line is utter nonsense; with a dinky 30mm stem, short offset fork and not-that-slack 66° head angle, it's willing to be thrown through flat or steep turns just as eagerly. 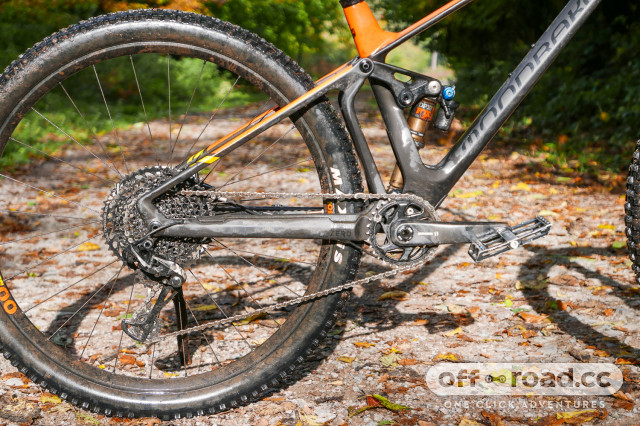 While Mondraker's reach figures might be radical, the bike runs a 75.5° effective seat angle that's actually based off a pretty slack and quite offset 70.5° actual seat figure, meaning the higher you shove the saddle up, the further your weight will be over the rear wheel with a consequently light and hard to manage front end as the climbs get steeper. 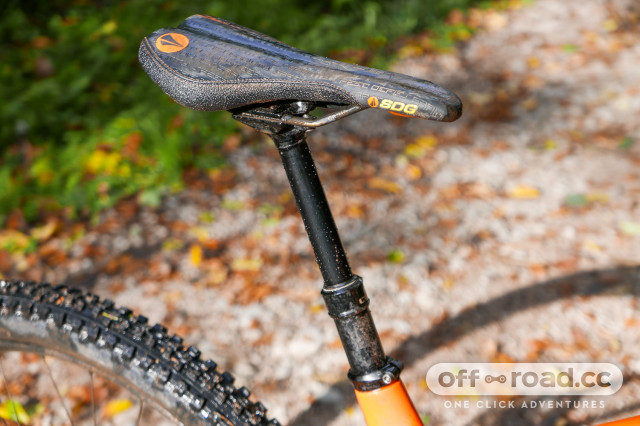 I found shoving the saddle forwards on the rails a fair bit on my medium bike meant I could get a decently forwards position for front-wheel traction climbing, but it's an effect that's compounded as you go up frame sizes. It's by no means awful, but with many brands offering much steeper seat angles, it'd be nice to see such a forward-looking brand stay ahead of the curve.

Still, the bike can more than handle itself when you start descending. It's not a total enduro-style trail smasher but it's perfectly happy once things get rough or steep, rewarding a riding style that uses the overall lightness and pert, poppy feel to skip up and over the rough stuff rather than ploughing through. 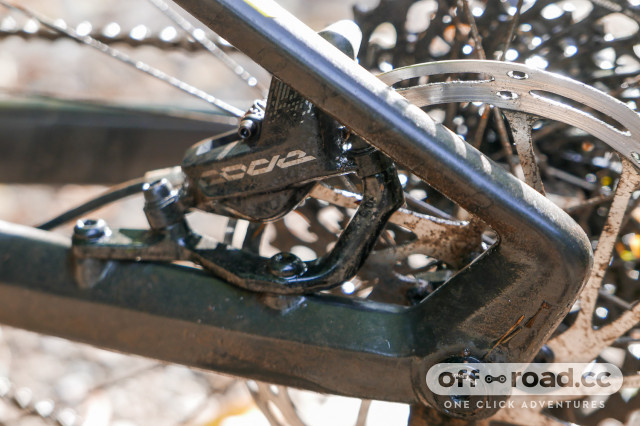 Some of that is certainly down to the lithe chassis and suspension setup, but the relatively skinny rubber also makes me feel this is a bike more pitched at rapid trail riding rather than sending it hard on big terrain. Maxxis has both ends covered with a 2.4" triple compound Minion DHR Wide Trail up front and an Aggressor 2.3" at the rear. Both are tubeless-ready and use and EXO casing for a bit of reinforcement but they inflate fairly narrowly on the wide rims and I'd personally be picking more aggressive, higher volume rubber for most UK natural trail conditions, though they're a-okay on hard-packed stuff. 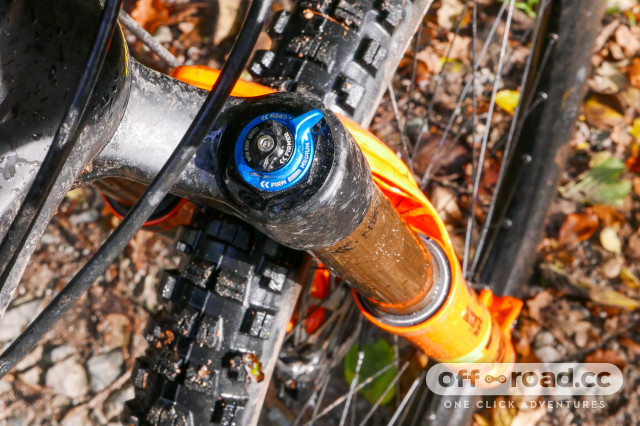 The heart of the Foxy Carbon 29 is an excellent frame with confidence-inspiring geometry and particularly perky pedalling manners. If you want to cover a wide range of terrain - from big all-day stuff to steep smash'n'grab techy trails - then it's a very capable machine that won't disappoint, even if it doesn't feel like it shares quite the same trail-smashing ability as some bikes at this travel, or indeed it's smaller wheeled ex-sibling.

However, the price is rather hard to swallow when it feels like there's been quite a bit of cost-saving in some areas.  It's not necessarily to the detriment of the ride for the most part; the lower-end brakes are still effective, the sluggish freehub pickup doesn't impact your ride that often and the short travel dropper post is more annoyance than deal breaker but it feels a bit tight. 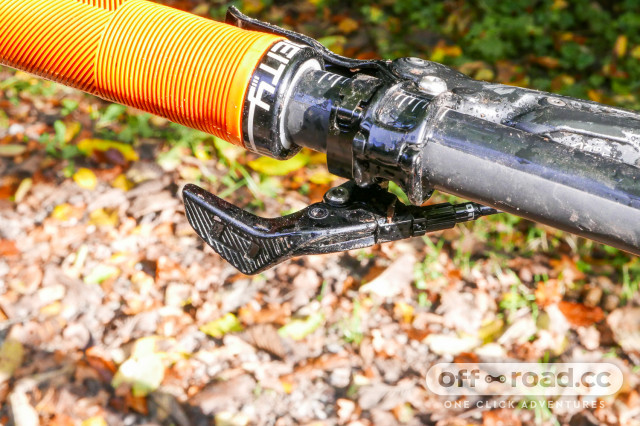 Doing that is probably preferable to cheaping out the frame and shocks - which hasn't happened here - but even when compared to high-zoot, premium kit from Yeti and Santa Cruz it's not great value - and it's best not to judge it against direct-sales machines at all. I'd argue the ride quality is superior to almost all of its rivals, which has a value all of its own, but it's still a tough pill to swallow as a complete package.

It's worth noting that this outgoing 2019 bike only really differs from the new 2020 model by the latter having a Shimano XT brakes and drivetrain plus different paint, so end of season sales might be your friend.