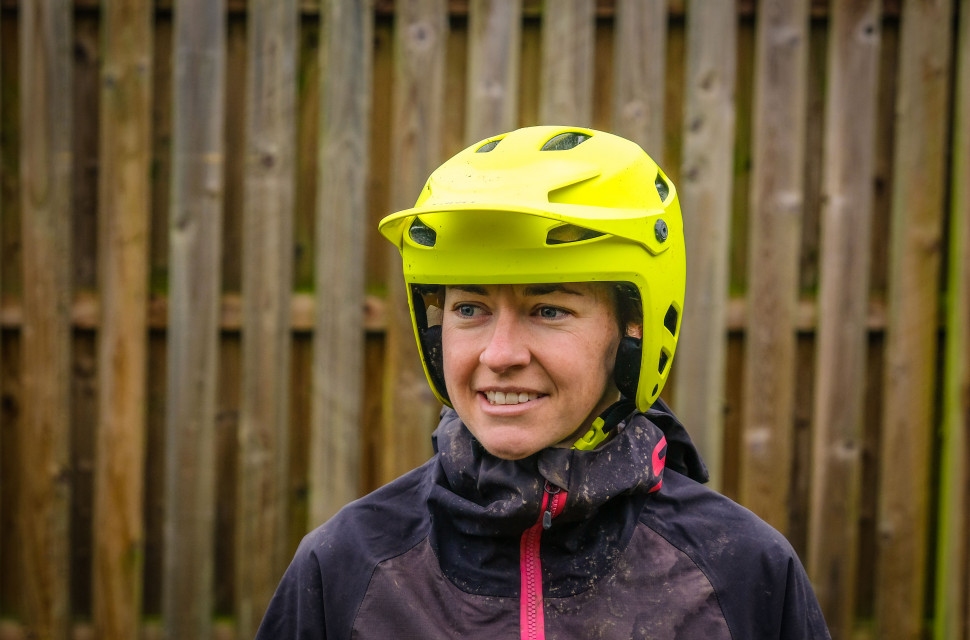 Rachael Wight
|
Feb 11 2021
|
Overall
Quality
Performance
Value
What's good?
What's not?
Buy if...
You like the looks and you want more coverage at the rear of the head and temples

The Giro Tyrant Spherical Dirt is a halfway house between a full-face and half-face mountain bike helmet. Whilst it's inevitably heavier than a standard open face lid, it offers a great deal of protection from the very low rear and its 'spherical MIPS' liner.

The Tyrant – especially in this fluro yellow – is a bold helmet designed for both singletrack thrashing and sending the dirt jumps.

It's the latter where the lid looks most at home. It offers excellent coverage around the skull due to that 'full cut', far more than a regular open face does, which Giro says 'further enhances its protective capability.' As the shell extends down to cover the ears, there's more coverage at the temples too, as with a full face lid. 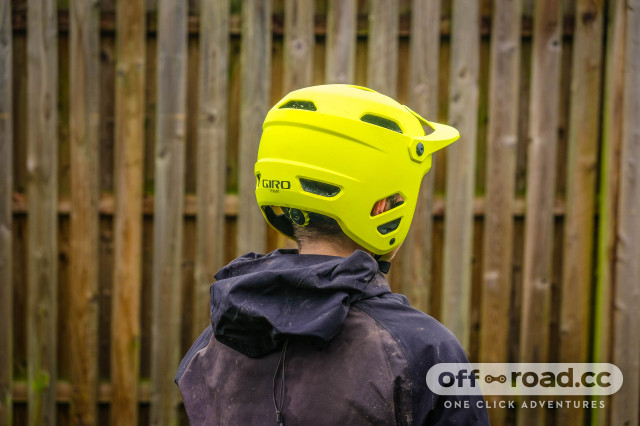 It's less padded than a typical full face, though. I found even with the thicker pads inserted the pads didn't touch my cheeks, which would allow some leverage in the event of a crash.

The chin strap is also more modest than a full-on downhill lid, and uses trail-style light webbing and a plastic clasp rather than a thicker stuff and metal D-rings. 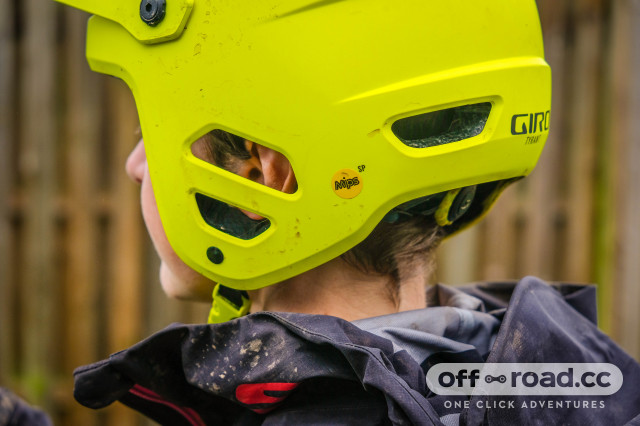 The Roc Loc Air DH retention system is effective, but on long climbs I have to loosen this a click or two to prevent a pinching pressure at the rear, just as I do with the Giro Switchblade (which uses the same cradle). Luckily it's adjsted with a large, easy to use dial at the back. 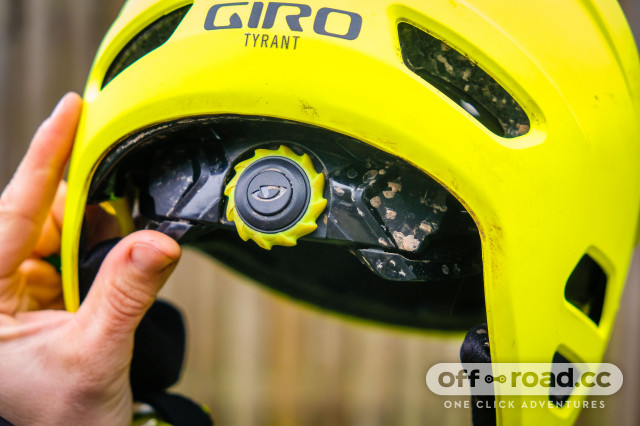 MIPS plays a big part in the safety claims of this lid. I've seen the Spherical MIPS system on the Bell Super Air R MIPS helmet and it's impressive. Two layers of foam work like a ball and socket joint; one has the hard outer shell attached, while the other fixes to the cradle and inner liner. 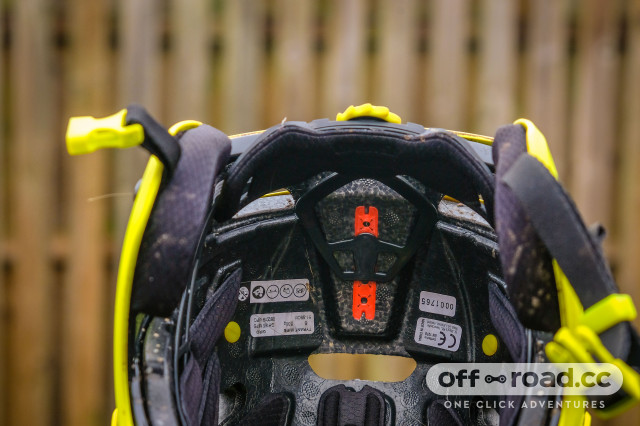 They slide over each other in the event of a sudden acceleration (aka a crash) and produce the most amount of fluid movement I've seen in a MIPS lid yet. Whilst I've not crashed hard in it personally, it certainly looks effective. 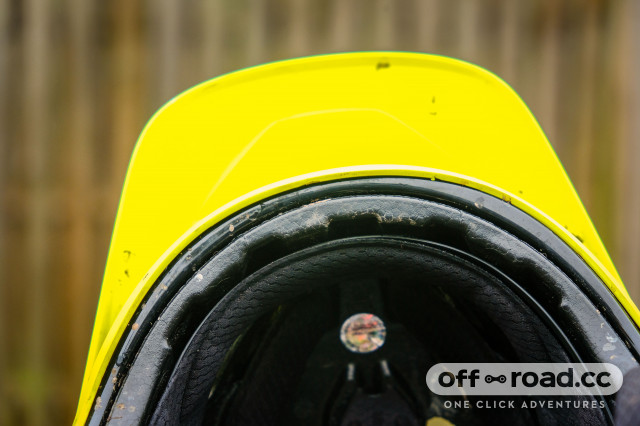 Other features include a widely adjustable visor, spare helmet pads, and the potential for use with both goggles and glasses. I wore both Smith Squad goggles and Smith Wildcat glasses with the Tyrant without issue. 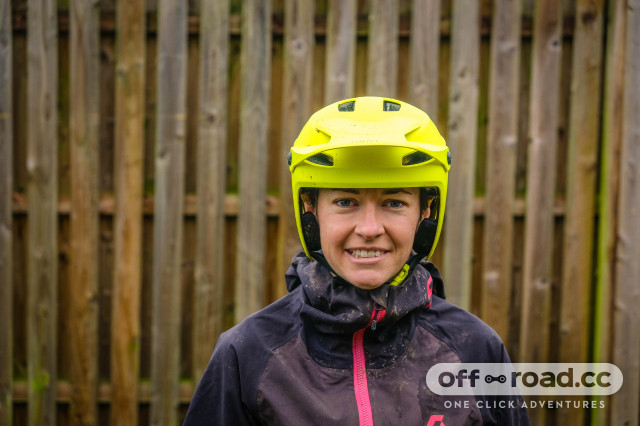 The Tyrant isn't as airy as a normal half shell, but then you knew that just by looking at it, right? It's cooler than a Switchblade (Giro's convertible full/open facer) without the chin bar, though, and it's not as hot as you might expect.

The 14 vents and meaningful internal channelling do a decent job, and I'm happy pedalling hard in the Tyrant, even if the extra safety means a bit of extra sweat. 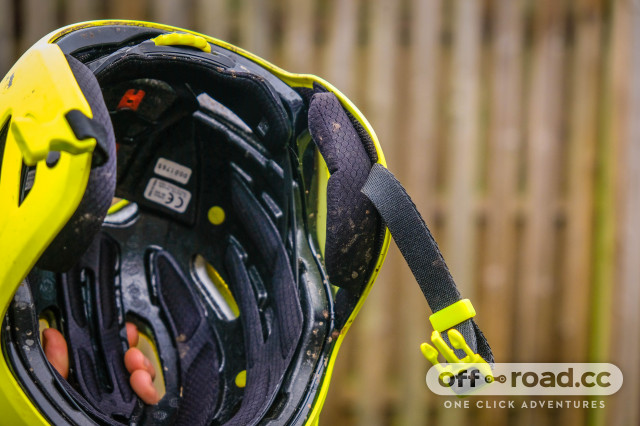 The Tyrant proves comfy, if a little heavy – it's 602g in this size small. This does take its toll over longer rides, but you get used to it. On rough downhills the helmet is secure and stable, the cradle working to hold its mass in check without any undue wobbling.

At £135 the Tyrant is cheaper than the brand's own enduro half-face, the Montaro, so if you want extra coverage it's nice to see you aren't charged more for the privilege – though the Tyrant lacks the Roll-Cage reinforcement of the Montaro.

Meanwhile, Fox's Dropframe Pro is £180 and very similar, though its cradle is unadjustable so you need to be certain about the fit.

The Giro Tyrant is a well thought out half-face for some serious, gravity-fed riding. It can get a little hot compared to proper half-face lids but it's comfy, great in winter and a particularly good choice for downhill laps on e-bikes, where the weight and heat retention are much smaller problems.