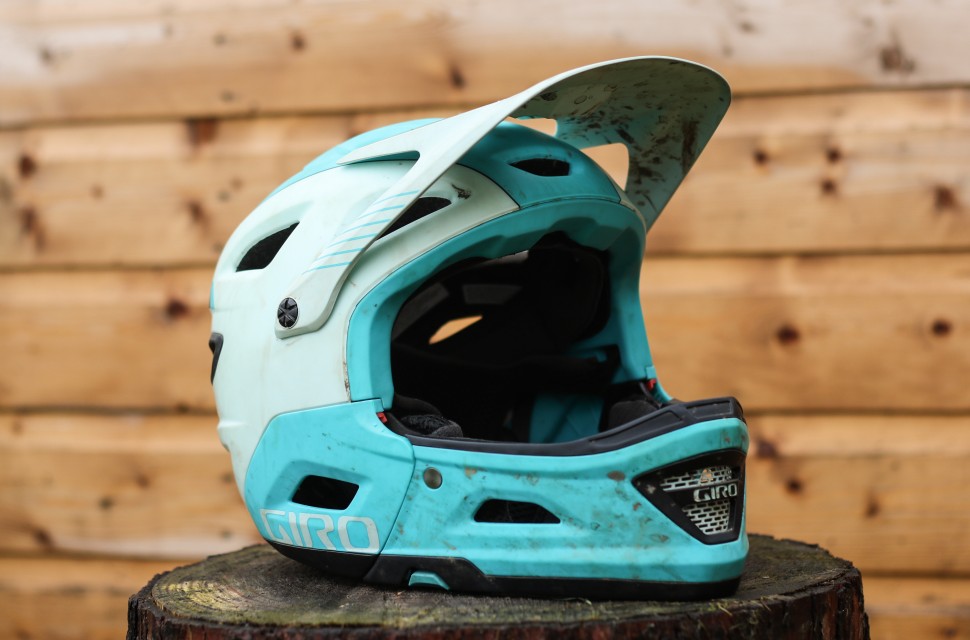 Rachael Wight
|
Jun 8 2018
|
Overall
Quality
Performance
Value
What's good?
What's not?
Buy if...
You want more protection on the trail without having to wear a full face lid 24/7

The Giro Switchblade is a comfy full face helmet that feels substantial, offering all the protection of a downhill lid whilst being convertible to a half-face lid too. If your ride normally consists of long winches to the top and gnarly descents or you are into your enduro racing then this stylish convertible lid is well worth a look.

The Switchblade is designed with enduro racing and technical descents in mind, built to offer the ultimate protection combined with the removable chin piece to allow more airflow when you need it. 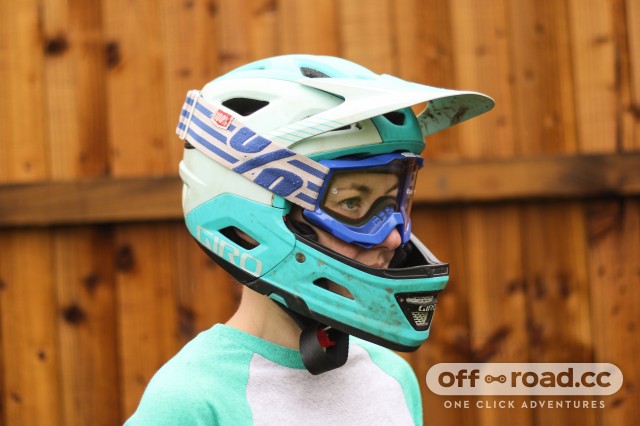 The lid itself looks very similar to the open face Montaro but with added ‘full-cut’ style, giving a low rear section and coverage over the ears, plus of course the addition of that chin piece. It is certified to the following standards: CPSC, EN-1078 and ASTM-1952-DH with and without the chinbar, the lid is tested at higher impact levels than regular lids and needs to offer more coverage to pass this test. It’s also got MIPS designed to dissipate rotational forces in crashes. 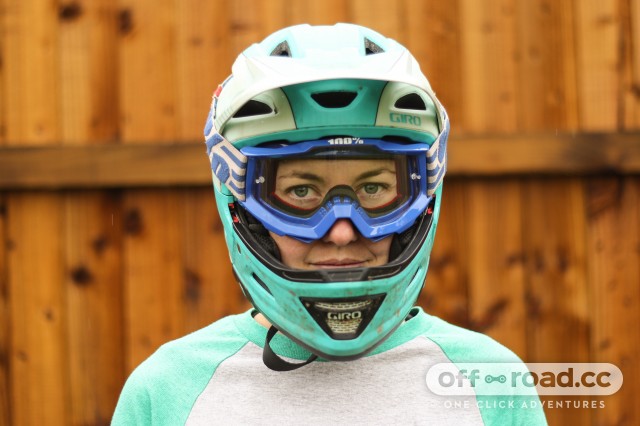 The chin bar itself feels pretty sturdy, sturdier than other convertible helmet’s I have used such as the Bell Super R2. The chin piece itself clips in place via a couple of metal bars - first, the upper one on each side slides into a recess on the side of the lid and then the lower bars hook on and clip into place.

Excuse the clicking from our noisy camera lens......

I found this easy enough to press the two buttons on the lower edge of the lid and take the chin piece off when the helmet is on but not so easy to reattach it. It's easy to miss the slot into which to slide the top bar into once wearing the lid. A bit of practice though and maybe a friend to give you a check over once you are done and it can be done relatively quickly. 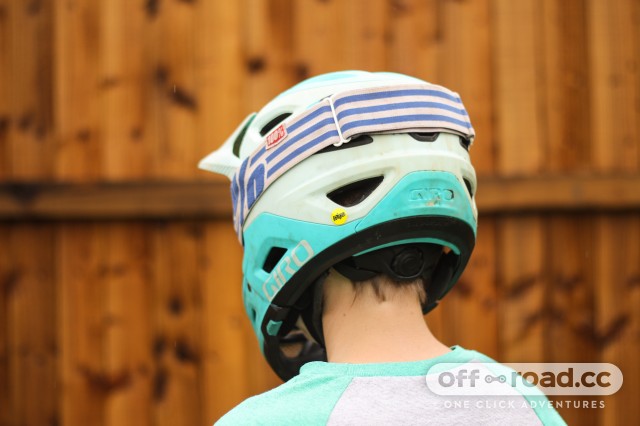 Getting the lid on and off with the chin bar already attached is interesting. I found I had to loosen the Roc Loc retention system fully and then pull the side pieces of the helmet apart as I slid the helmet down over my ears. Without manipulating the helmet like this is just wouldn’t have gone on! The lid wasn’t too small for me either, in fact, if anything I saw the opposite. I have a 53cm circumference head and wore the size small which caters for heads in the 51-53cm range. Anybody with heads smaller than mine though are going to struggle, I have the retention system in the highest of three positions and have to really winch it up to prevent the helmet wobbling. The chin strap also had to be done up as tight as it can go and I’d have preferred it a little tighter but the thicker material prevented this. It’s worth noting I also wore the lid with the thicker set of chin bar pads supplied. 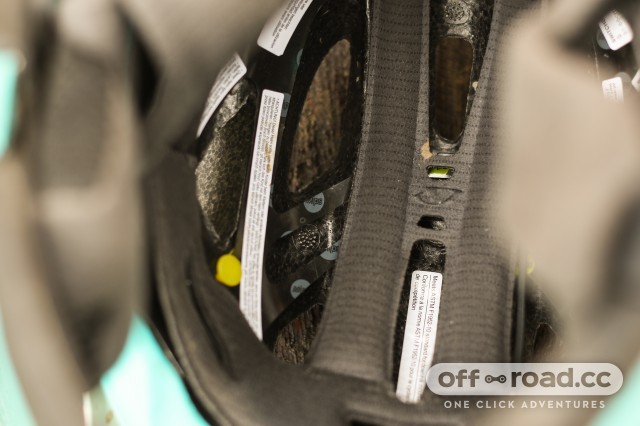 As I have mentioned the lid uses Giro’s Roc Loc Air DH retention cradle. This sat low at the back of the head and exerted a little uncomfortable pressure at the bottom of my skull. I found I would the dial off a click or two when climbing to relieve this and didn’t notice it at all when descending! The dial features a ‘bumper’ around it which prevents the dial being moved when you are getting rowdy, it also means it’s a little harder to get hold of when you have gloves on or sweaty hands. The dial is pretty stiff but moves with very defined clicks, of which there are many so it’s easy to find the fit you want. 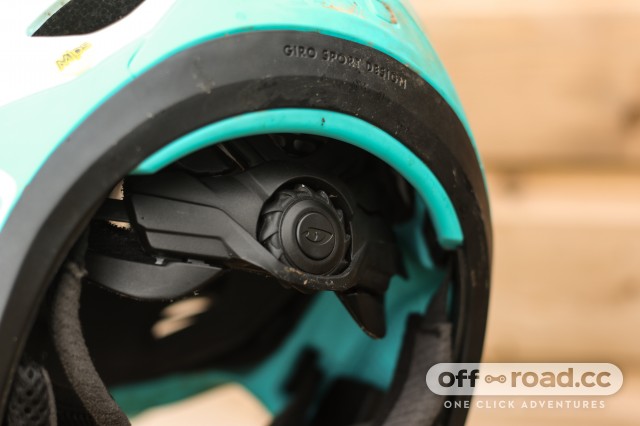 Ventilation wise, there are 20 vents in total which do a great job of keeping things cool. No, even without the chin bar it's not as well ventilated as a regular open face helmet but I think it does pretty well considering its purpose. Up front, the large visor looks a little out of proportion with the chin bar removed but balances the look well when the helmet is used as a full face. Giro also give you a second visor with helmet camera attachment too, its great to have a spare of this vulnerable piece! It’s also a lot easier to hear when wearing this lid, the ventilation holes at the side helping matters here. I went full enduro and rode in the Switchblade in goggles and I reckon most of you will do the same, I couldn’t fit the arms of a pair of glasses between my head and the padding, taking the ‘euro’ look option away from me. 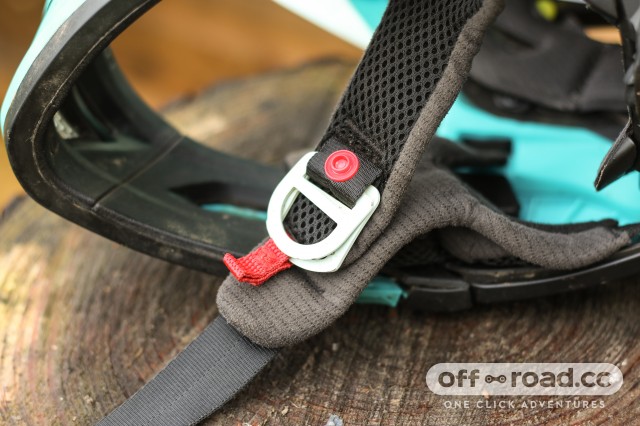 I weighed my small size lid in at 921g with the chin bar on and 632g with it removed. It’s lighter than a regular full face and heaver than that Bell Super 2R I mentioned earlier (730g, size small) but that one doesn’t meet the same helmet standards. It’s also heaver than the Fox Proframe, our one of those weighs 765g in a size small, but of course, you can’t remove the chin bar on that one. 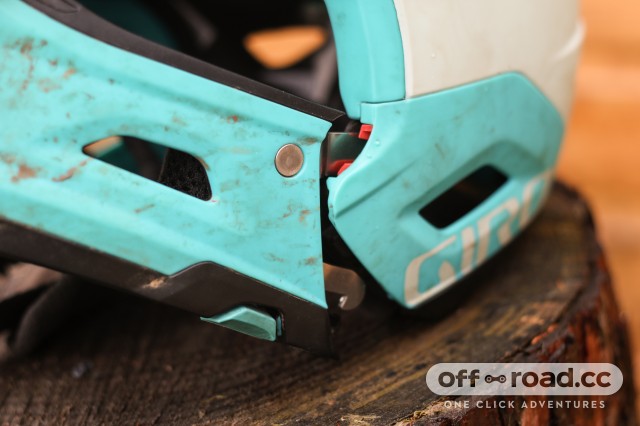 Riding in the Switchblade is a comfortable affair, it’s a little weighty to wear all day but you soon get used to it and I really valued the extra coverage for the piece of mind when descending. I’ve used this lid for racing and regular trail riding alike and haven’t picked up a proper full face since getting this on test, always opting for the Swtichblade. It offers great protection and ventilation and is a no brainer. It is worth noting I haven't race downhill either, only enduro, but I have ridden DH tracks in it. 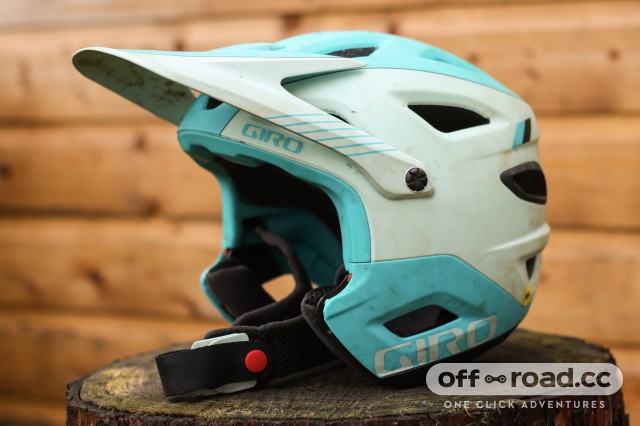 I have to admit, I haven’t actually take the chin bar off for climbs too often. On my tricky local trails the climb is short but steep and it’s more faff getting the chin bar in and out of a bag than it’s worth to remove it for the climb. During winter testing too I kept the chin bar on for warmth. Riding in the Lakes while back though and can see that the removable feature of the chin bar would come in handy here when slogging out a long hot climb before tackling the descent. You’ll need a pack though to store the bar, I’ve been trying to figure out a way to hold it or attach it to my bumbag to no avail, its not small and is an awkward shape, maybe next time I’ll take an elastic band and hang it from my handle bars when climbing! For reference when using the Bell Super 2R I slipped a bum bag buckle through a vent on the chin bar to attach but you can't do this with the Giro as the vents are smaller. 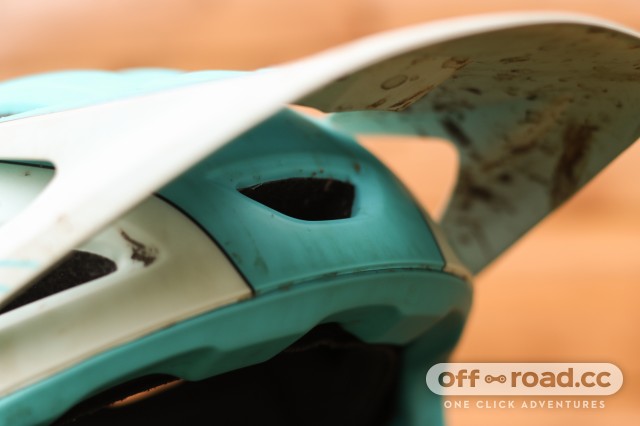 At £250 the Switchblade is a bit of an investment for what might ultimately be your second lid. It's comparable to owning a good full face as a secondary helmet though so I don't think too many will baulk at the cost. The Fox Proframe costs £215 and the new Bell Super3R is £200 so it's close to the ballpark figures offering the best of both worlds with DH certification and a removable chin piece. Plus look around and there are some Switchblade bargains to be had on the internet. 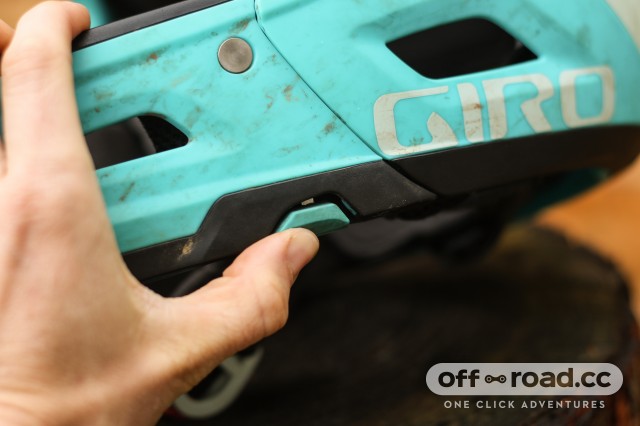 Since its inception (well the second one anyway) the Giro Switchblade has become a regular feature on the trails, so much so that wearers no longer get stared at for their moto-trials style. The Switchblade is a viable alternative to a full face helmet for enduro racing and technical trail riding, it will keep you relatively cool, it’s not that heavy, it's a comfortable lid to wear all day and it looks good with the chin bar attached which is more than can be said for other convertible options. All whilst protecting your pearly whites, of which you only get one set, a good reason if any to make the purchase.

Giro say - The Switchblade™ MIPS is our new ASTM downhill certified full face helmet with a removable chinbar. Everything about the Switchblade is optimized for the descent, and that’s why it’s certified to CPSC, EN-1078 and ASTM-1952-DH with and without the chinbar. The chinbar is easy to remove—just push the buttons under the chinbar, rotate up, and remove—and it’s just as easy to reinstall. The Switchblade MIPS features the new Roc Loc® Air DH fit system, which has a bumper around the dial to prevent accidental adjustments if your helmet contacts your backpack or neck brace—all while keeping you cool. When the chinbar comes off, Wind Tunnel cheek pad ventilation adds even more cooling power as you start to climb. Plus, the full-cut style gives this helmet an aggressive look and provides ASTM certified coverage even when the chinbar is removed. When your ride is all about descending, your helmet should be too, and the Switchblade MIPS is the only removable chinbar helmet that is truly built for the down.