Skip to main content
Log In Register
Garmin Forerunner 745 review £400.00
A clever piece of tech that'll track everything you could want but a hefty price tag to match 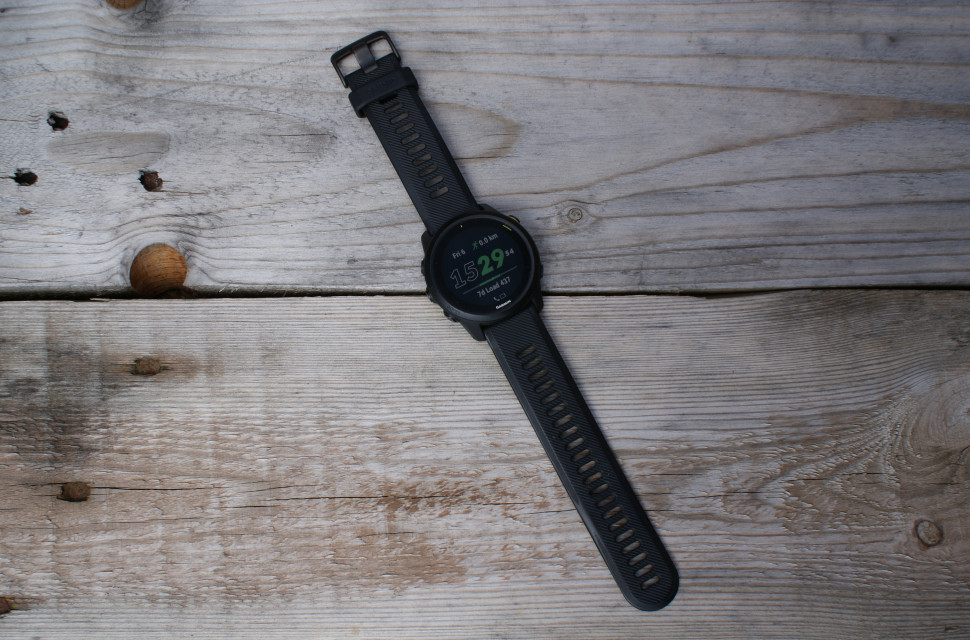 Ty Rutherford
|
Sep 6 2021
|
Overall
Quality
Performance
Value
What's good?
What's not?
Buy if...
you want an accurate do-it-all watch that covers everything you could want to track

Garmin's range of data measuring tech is immense. The Forerunner 745 is a mid-range smartwatch that is predominately aimed at runners; however, it has some handy tech that makes it great at tracking cycling activities as well.

Although this watch can track every piece of data, you could imagine and probably some you haven't. So for the purpose of this review, I'm focussing on functions relevant to cycling.

Downloading the Garmin Connect app is simple enough (tested with iOS), and getting the phone and watch synced up was problem-free. The initial set-up was fairly straightforward; however, if you're not familiar with the menu structure for Garmin, it can be a bit of a minefield finding the one specific thing you want to adjust. For example, changing the units on the watch from feet to metres took several attempts of menu navigating before I found it in the device options. This wasn't intuitive, but once you understand the menu structure, it is logical.

With the staggering amount of data available, it takes a little while to focus on what you want to track. All the screens are fully customisable, allowing you to select the data you're interested in and arrange it how you want. For mountain biking, I focused on distance and ascent, which can both be tracked live whilst recording your activity. From completing the same ride with friends who used other devices, such as Garmin Edge 130, Garmin Instinct Solar and Apple Watch, I can confirm both the distance and ascent proved to be believably accurate with the agreement to within 10m of ascent and 1km of distance. 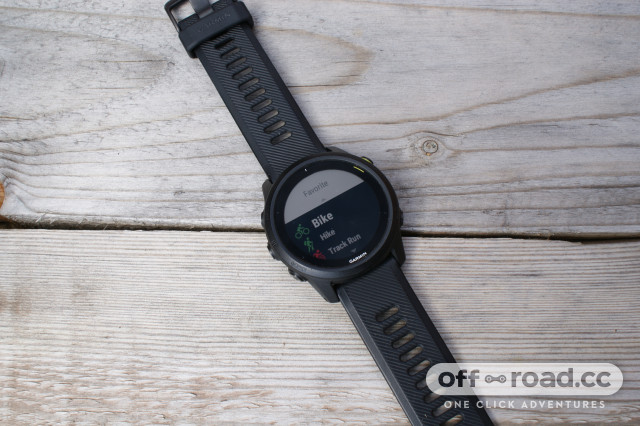 The Forerunner 745 has a barometric altimeter, the key sensor required to provide an accurate ascent measure. This sensor uses air pressure to calculate altitude rather than GPS signal, which can be patchy, particularly in forest areas. The lower end Forerunner 245 doesn't have this sensor and therefore uses a GPS signal to calculate ascent, which has proved to be wildly inaccurate to the tune of 500m for some big rides. Lesson learnt – make sure your tracker has a barometric altimeter.

Due to the heart rate monitor measuring from the wrist, the bpm reading isn't as accurate as it could be. Therefore, if you're interested in working in the correct heart rate zones, the watch can pair to a chest-mounted heart rate monitor to give a more accurate reading. The watch can also be paired to bike-mounted power meters if you're interested in tracking watt output. The Forerunner 745 has the ability, through the "Bike Indoor" activity, to pair with a smart turbo trainer, which allows tracking of training rides (which I hope are only resorted to in the cold depths of winter or COVID isolation).

The construction of the watch is reassuringly tough. However, I'd argue it doesn't feel like a £400 watch. The fibre-reinforced polymer bezel is surprisingly tough but feels cheap to the touch. The lens is made from Gorilla Glass DX, which has proven to be scratch-resistant through involuntary testing by dropping the watch face down onto the gravel. This incident resulted in no damage to the lens - impressive. As the watch is also suitable for swimming,  it's waterproof to a depth of 50m. So, for mountain biking, the wet and muddy rides were no problem, and the large buttons made the watch easy to use, even with soggy gloves. The screen provides a clear read-out; it is perhaps a little basic but does the job with no frills. 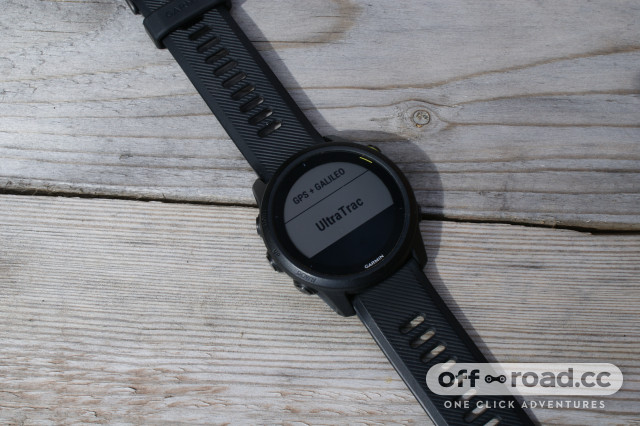 Battery life is a key feature that tends to be a compromise between fancy features and longevity. The Forerunner 745 manages its battery well, being able to track 3-4 big rides on a single battery charge or lasting approximately a week with 2-3 tracked rides. Garmin does offer UltraTrac to extend the battery life further during GPS tracking by simply lowering the update rate of GPS data to once a minute. This could be useful during long rides where there isn't a long of meandering. However, it will greatly reduce the accuracy of the route tracking and data collected due to the lower sampling rate. The Forerunner 745 model can connect to headphones and play music with the need for a phone, perhaps a handy feature for solo rides, but it does come at the cost of significantly reduced battery life – this is more of a running targeted feature where carrying a phone is more of a pain. Charging is dealt with through Garmin's specific USB cable, and it takes around 1.5 hours to charge from flat to full.

Downloading data from the watch is done through the Garmin Connect app by simply opening the app and letting the watch download over Bluetooth. This gives a dashboard showing key stats from the activity and allows you to delve deeper into the areas of interest. The Connect app can be linked to automatically upload to all the big lifestyle apps such as Strava, My Fitness Pal, Training Peaks etc. Garmin also has its own store called "Connect IQ", where apps, additional downloads and customised clock faces can be found. 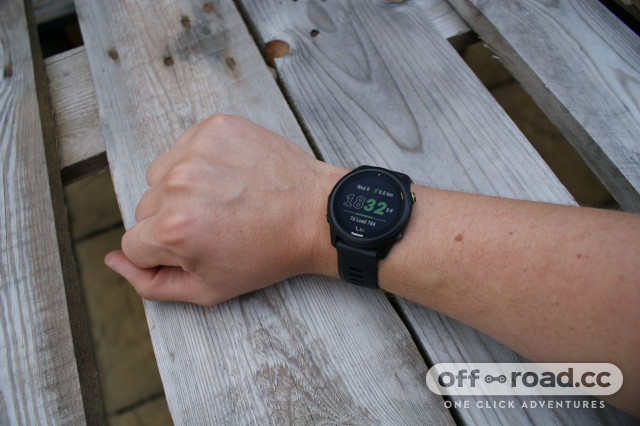 Retailing at £400, the Forerunner 745 does pack in a lot of tech, but it's still a hefty price tag when you're likely to only use 10% of the functions. Rachael reviewed the Vivoactive 4, which is significantly cheaper and still provides excellent cycling capabilities. If you're only interested in cycling, a dedicated bike computer would be a cheaper alternative, such as the Garmin Edge 130 plus. From other brands, there is competition from the likes of Fitbit with the Versa 2, which is more of a lifestyle watch but will have comparable accuracy thanks to its barometric sensor and is significantly cheaper, retailing at £150. Apple's watch will also track mountain biking and do it well; this is also a lifestyle watch and retails from £379.

Suppose you're looking for a device to track your riding activities and can forego heart rate tracking (without a chest monitor). In that case, you're better off with a significantly cheaper dedicated unit such as the Garmin Edge 130 Plus. However, the Forerunner 745 strikes a brilliant balance as a "do-it-all" watch that does a great job covering a wide range of activities. 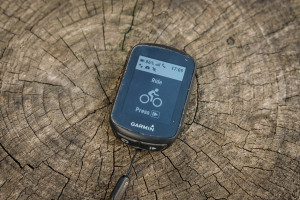 How accurate is the GPS? I've lost count of the number of Strava KOMs I've seen with these (type of) things that are blatantly dodgy (you can see on the speed graph).

For running this is probably not a problem