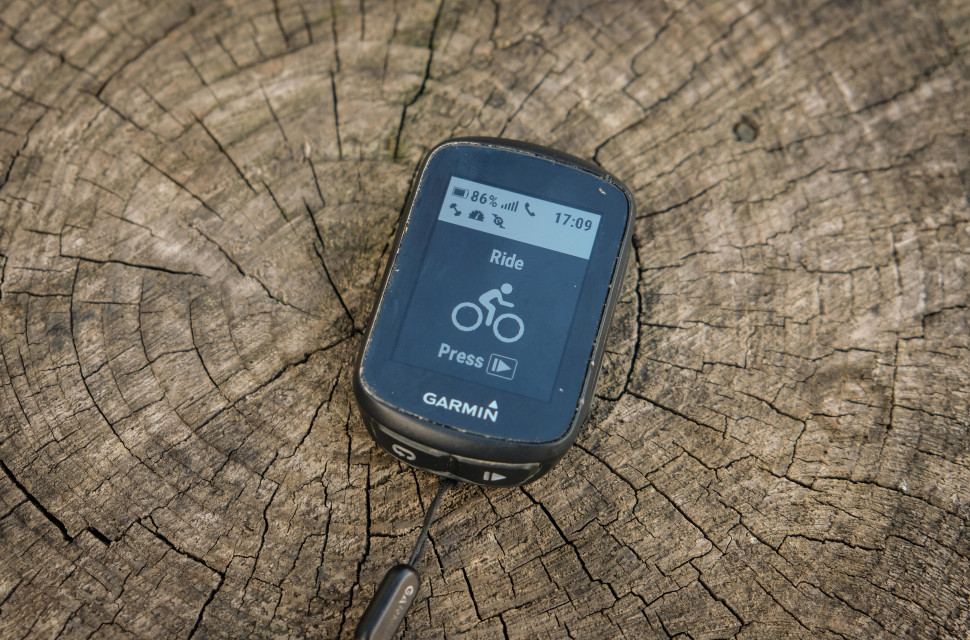 Rachael Wight
|
Sep 10 2020
|
Overall
Quality
Performance
Value
What's good?
What's not?
Buy if...
You want a small GPS that does the necessary with minimal fuss

The new Garmin Edge 130 Plus is an updated 130 with a load of new features and connectivity. Good for road, gravel and mountain biking with metrics that measure how far you jump, the Edge 130 Plus is a tiny package that's straightforward to use – it's suited to pretty much every regular rider.

Updates include incident detection, smart trainer compatibility, Climb Pro (to measure climbing effort), navigation (of sorts), more storage space for routes, and an accelerometer. These extras add £20 over than the older Edge 130, and take the 130 Plus to £170. 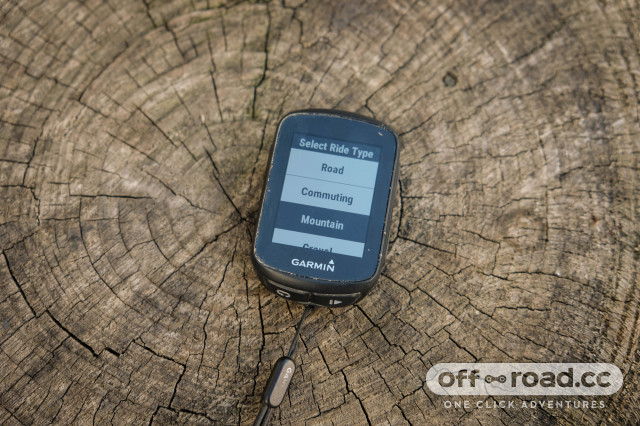 The 130 Plus supports Strava Live Segments, which is pretty cool – the device tells you when you're near a segment, and displays your results in real time. 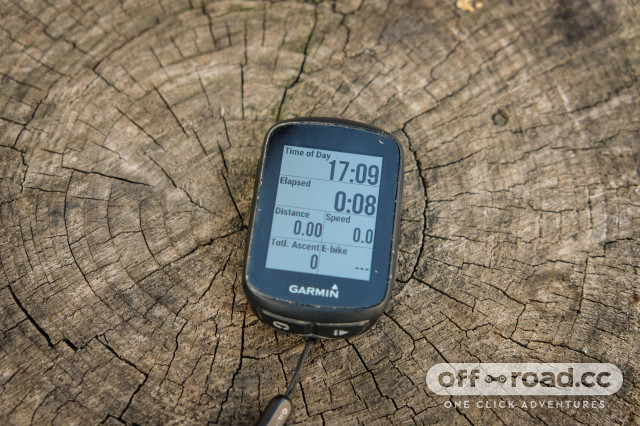 The display can be customised for between one and eight data fields, and you can add extra pages of fields too, such as mapping, weather and phone notification pages.

There are a great many regular data fields to choose from, including time, distance, lap and so on, or the likes of cadence, power and heart rate should you have sensors connected. I settled on six fields on the main screen, with it displaying the basic and also my e-bike battery level. 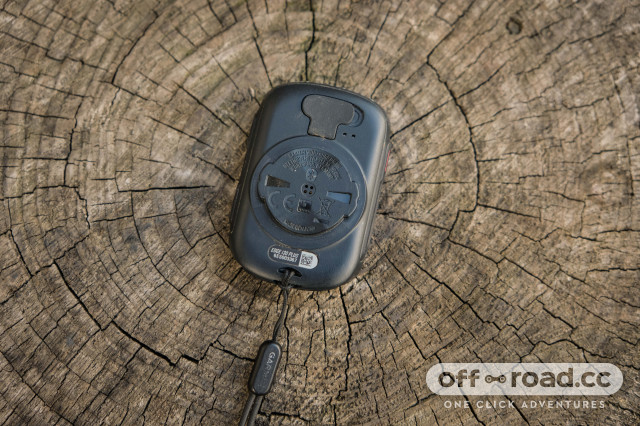 Any more data fields though,  and I think you'd struggle to see them on the fly. Paging through the screens using the up/down side buttons is easy when riding, however – easier than with the touchscreen on more expensive Garmins!

It's easy to set a second page of different fields on another screen, then simply flip between them when changing bikes or riding styles – trail riding to gravel, for instance. With five screens available, there's plenty of scope for customisation. 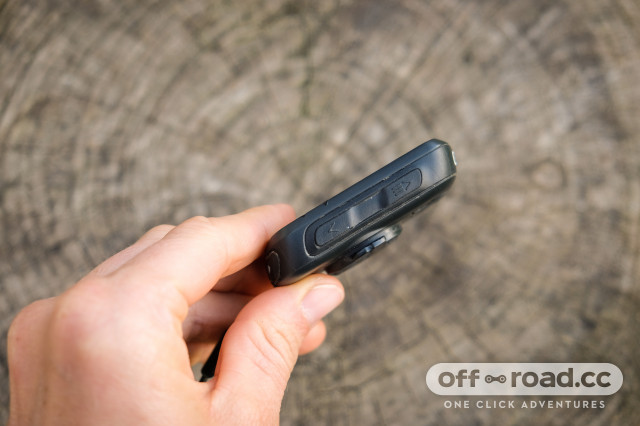 You can also connect to the Garmin Connect IQ store to add Apps – I just added my e-bike's battery life to my main data field screen, but there's lots more besides that. 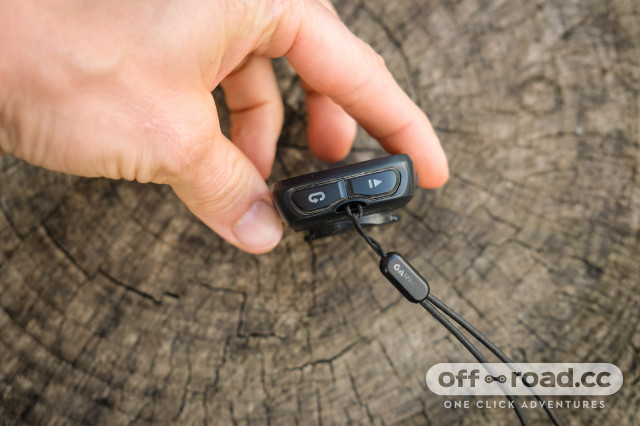 This device is easy to pair to a phone via Bluetooth, and once you have it auto-uploads to Garmin Connect – whereby you can view ride data or, if you have something like Strava connected, auto-upload to that too. 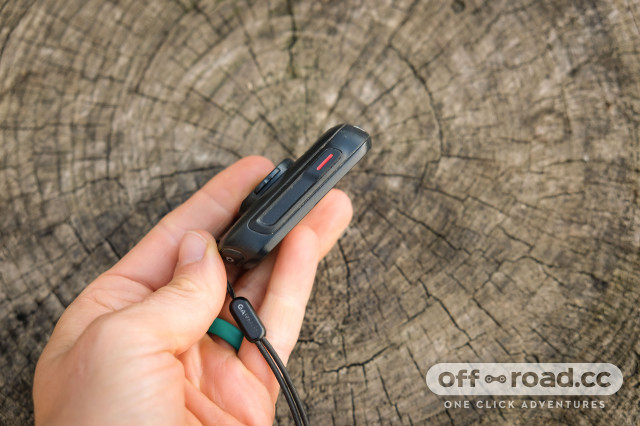 As there's no touchscreen, the device is navigated via five buttons. It's simple to use and has a no-fuss air about it. If you simply want to get on and ride you press enter, select the type of bike you're riding, then press enter again. That's it. 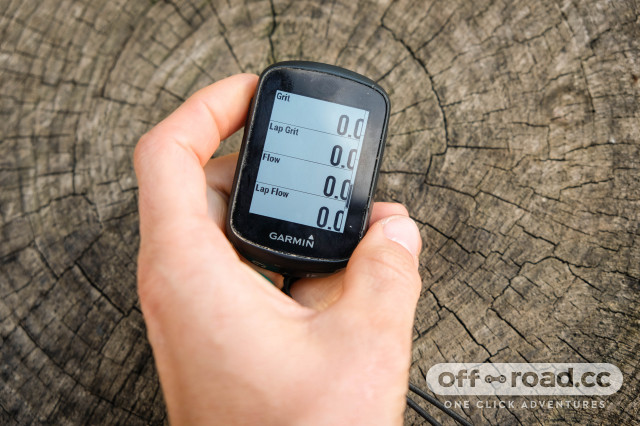 Pressing and holding the upper right button takes you to the menu, where you can use previously downloaded workout plans, follow courses in the navigation menu, check your history of activities and dabble in the Live Track or Incident Detection features. 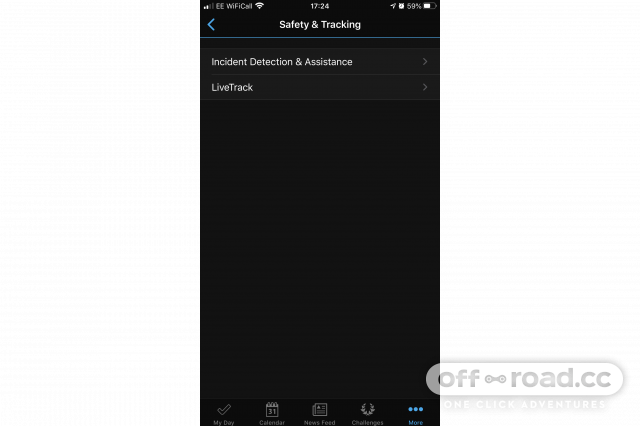 The two most useful, from a mountain bike perspective, are Live Track and Incident Detection. Live Track allows you to share your ride as it happens – a great safety feature for those riding alone.

Incident Detection uses the new accelerometer to sense crashes (or sudden changes in speed, at least), then sends a message to your chosen contacts. If it thinks you stacked it the device gives you a countdown to stop the message going out, which is sensible, but I've set mine off with severe braking – be warned, it's sensitive! 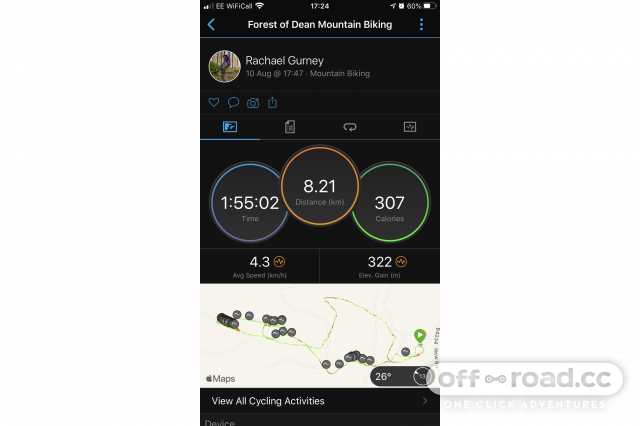 The Edge 130 Plus' GPS connectivity is fast and reliable, and it hooks into several systems: GPS, GPS+GLONASS, and GPS+GALILEO.

Navigation here is a token gesture, though, as the device can't show maps. What you get is a 'breadcrumb trail' to follow, essentially a line showing if you are going in the right direction or not. It's not going to replace a map or other navigation device, and I found it pretty useless, especially offroad.

If you want to navigate via Garmin you're far better served by something like the Edge 520 Plus. 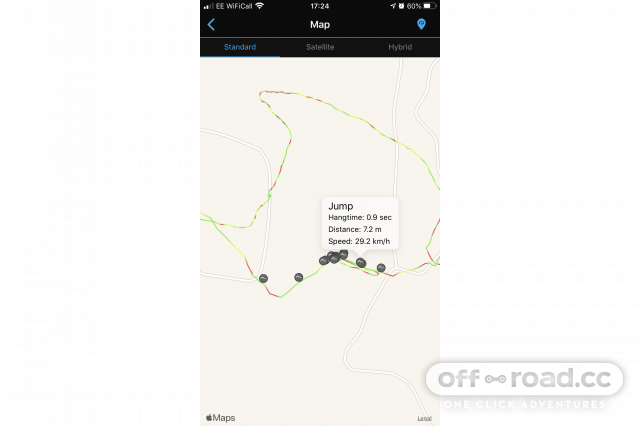 So, what's all that about measuring hucks? The new Mountain Bike Dynamics introduces a few new metrics: Grit, which is a difficulty score for your whole route; Flow, a rating on how well you rode a route; and Jumps, which measures how long you were in the air and how far you went. All airtime is plotted on a map.

This is fun to look at, but not that accurate – it plots the jump location pretty well, but I found it overestimated distance. Ah well, it'll work for bragging rights in the pub...

The bar mount is a rather rudimentary elastic strap and plastic interface, but it's on par with the competition and there are plenty of aftermarket upgrades. The main competition comes in the form of the Wahoo Element Bolt, but that's much larger and £30 more expensive – although our tests show it gives great battery life if that's a consideration.

The Edge 130 Plus' claimed battery life is fairly accurate: it near enough manages the 12hr runtime when just running GPS, although add Live Track and that drops. I usually got two good rides out of it between charges.

The Garmin Edge 130 Plus is a small and neat GPS with great phone connectivity. The off-road elements are fun if slightly gimmicky, but nevertheless this is reasonably-priced GPS for any road rider, gravel rider, commuter or mountain biker. It gives all the statistics and sensor integration you need in a reliable package that operates well, and without the use of unreliable touch screens. 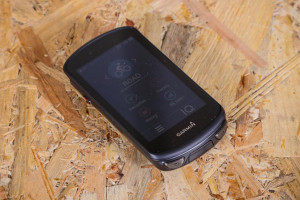 I presume it the same as the 130 which is simple. You just press the stop button to bring up a menu.

Press right side bottom button once to scroll down to it.

Then press the bottom side right button (enter) to confirm.

It'll take you to the classify ride page, I don't worry about it and just press enter again.

Somtimes hitting 'pause' will bring up some options to stop or save a ride etc etc etc. Though this is the case on my old 520(non-plus) Try it out. Start a ride then hit pause and see if this does anything.

What Rachael Gurney didnt tell you or failed to mention in this review that the 130 is indeed ANT+ compatible. So if you're switching from a different garmin or wahoo unit that you had ANT+ sensors with, you should have no problem getting them all sync'd up again with the 130.