Skip to main content
Log In Register
Cube Edge Trail backpack review £124.00
Stable pack that carries lots of kit but the storage layout isn't the best and it's heavy 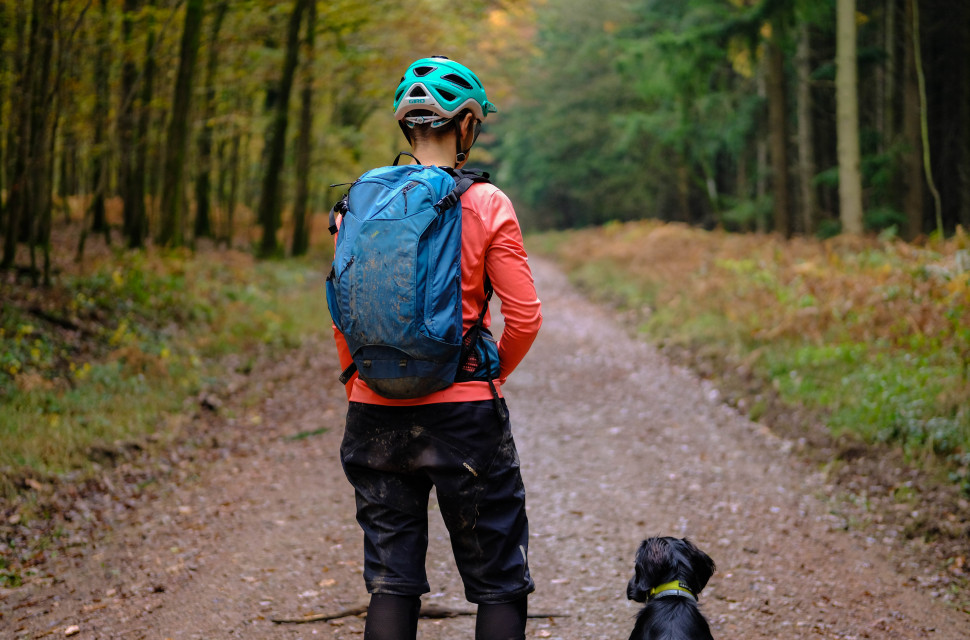 The Cube Edge Trail 16L hydration pack is large, sturdy and incorporates a useful back protector. It's a good partner for long, all-day adventures, yet stays stable when the going gets tough thanks to large and comfortable waist straps. On the downside it's heavy, the storage doesn't have the best layout and there's no bladder included.

The Cube Edge Trail is a subtly-branded trail pack with 16L of storage. It's designed for an oblong-style bladder that sits in a separate compartment alongside the removable back protector (Cube's own SAS-Tec SCA 450), but while back protector is included, you're forced to squeeze in your own bladder (so to speak) as the pack doesn't come with one.

It's great the bladder section is separate, as it makes removing and refilling it a doddle, and gives easy access to the 280g protector. The SCA 450 is thick viscoelastic foam – the malleable kind that stiffens under shock – so could be very useful in an impact, though if it's passed any kind of independent test the specifications don't mention it. 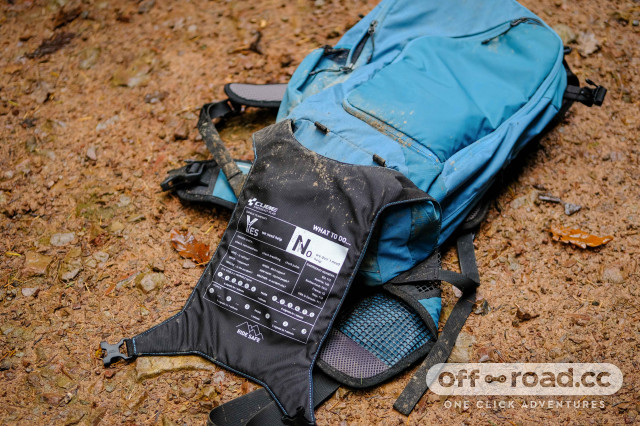 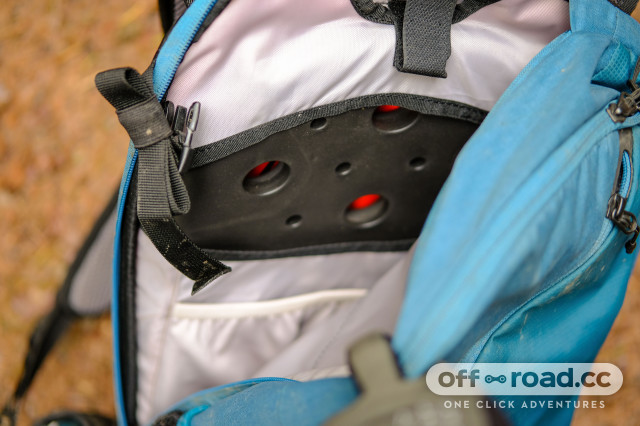 The Edge Trail has a great many features. The multiple outer pockets include a bottle-shaped one on the side, and there's an easy-access map or phone pocket too. The large flap works as a helmet carry, but while it also has an additional pocket it's pretty hard to access and only useful for flat items.

The helmet carry is limited to just that – those open sides mean it won't suffice for coats or such like without the worry you'll lose them out the side. The upper straps are also pretty long, leaving the helmet carry flapping a little unless the bag is full. 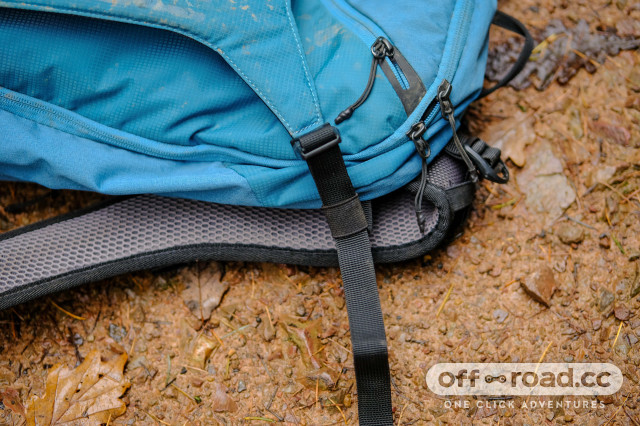 The rear panel stands away from your back a little to allow airflow up and down the spine. I tested this bag in pretty uniformly wet and chilly conditions, so I can't say how this works in hot weather with less fabric to block the channels, but it's unlikely to do any harm. It also helps stop the contents pressing on your spine (as does the extra rigidity from the back protector).

The shoulder straps are thick and well padded, with plenty of adjustment over the shoulder and across the chest. In a neat touch, all straps have elastic keepers to stop the excess from flapping. 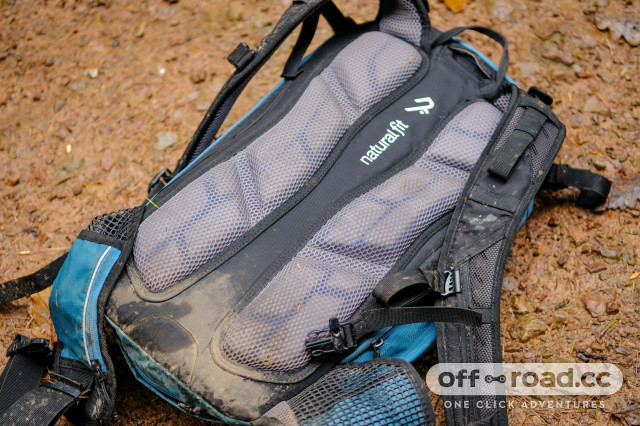 The waist straps are large and shaped well for great stability, stopping it swinging side to side or up and down when thrashing downhill. They take the weight of the bag superbly and are comfortable, plus their large zipped pockets are perfect for a quick access multitool or snacks. 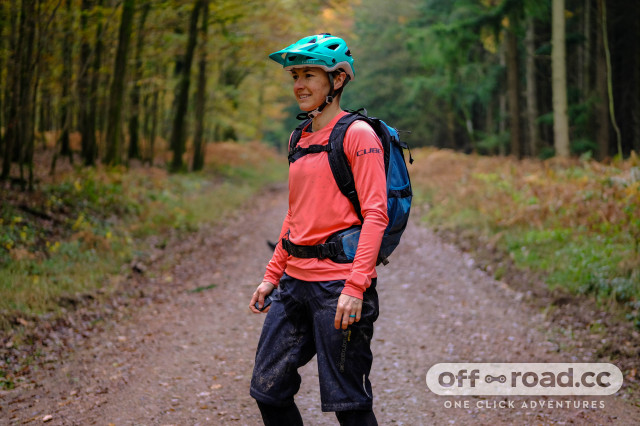 At the bottom is a waterproof rain cover which fits very well, stays secure and carries out its duties without fuss. It's black too, which I like; no fluoro nonsense as on other bags, or when you buy covers aftermarket. 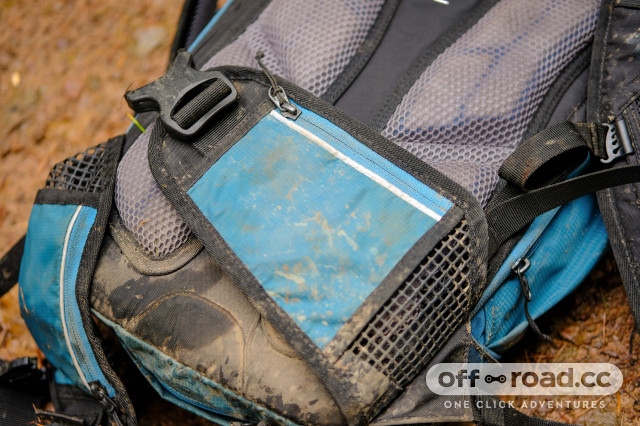 It's not all good, though. The prime frontal compartment is poorly laid-out and lacking room – throw in the basics such as a multitool, tubeless repair kit, money, your ID and car keys and already the front of the bag is bulging and front-heavy.

This means most of your tools and kit have to go into the main compartment, which is simply a cavernous space with little to secure or organise anything. Yes, it has two small pockets, but one is (again) only viable for flat things and the other is fleece-lined. Use it as intended to protect a phone, goggles or glasses and you won't want to be shoving tools or anything else in alongside. 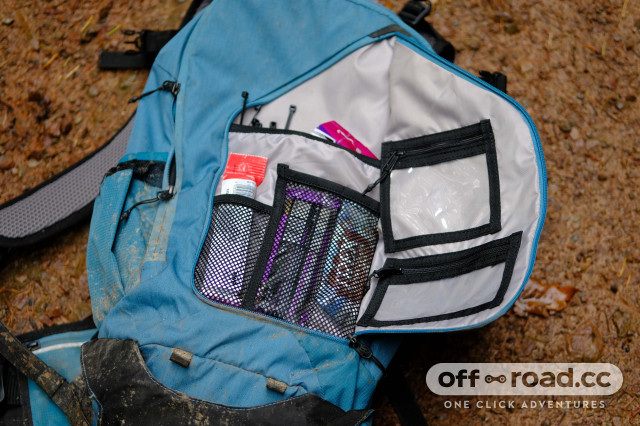 With no straps to secure them, your pump and shock pump move around at will and you end up constantly rummaging through loose snacks for that elusive tube. It wouldn't take much to add tabs for pumps and larger pockets across the rear – plus the rigid nature of the pack would lend itself well to this design. 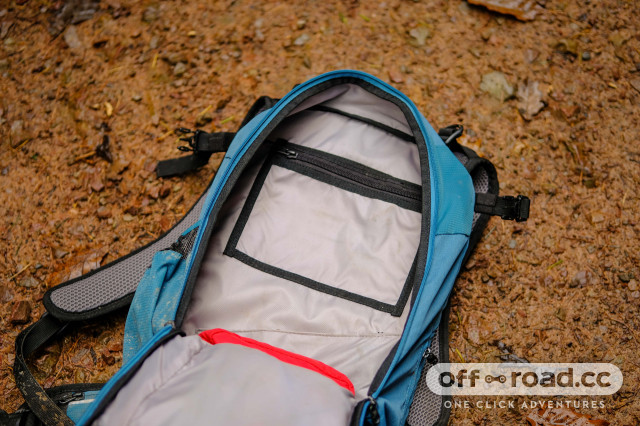 Then again, this thing's heavy already at 1450g. For comparison, the larger 17L Camelback KUDU is only 50g more at 1500g, whilst the 16L EVOC FR Enduro is just 1050g. Even with the back protector removed, the Edge Trail can't beat the EVOC – it's a chunky 1170g all on its own (and without a bladder, remember).

Although stable, comfortable and blessed with numerous pockets, the CUBE Edge Trail is neither sufficiently cheaper nor sufficiently better-designed than its rivals. If you don't mind the extra heft, the 16L Edge Trail carries a good load without fuss or discomfort, while adding a degree of protection for your back. The design could be better, though, and its size and weight is overkill for normal shorter rides.