Skip to main content
Log In Register
Ribble HT 725 Sport Build review £1,499.00
A good entry-level steel hardtail for those who love descents, though the fork is a weak point 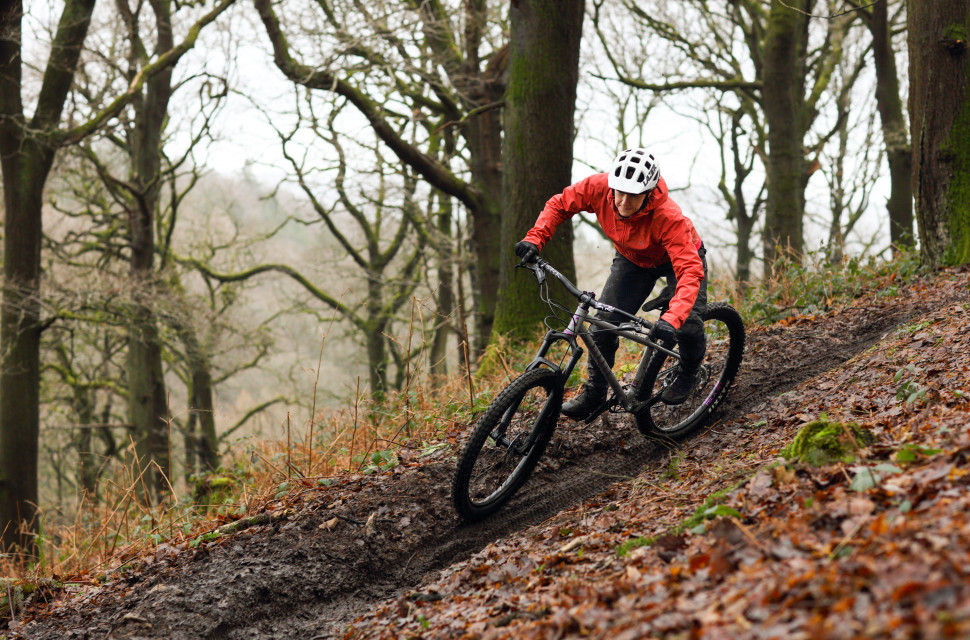 The Ribble HT 725 Sport is a great 150mm steel hardtail for those on a budget. It's progressive, good looking and built for gravity-fed riding – it ticks most boxes for hardtail lovers, though it's a shame there's no 29er version alongside these 650b frames.

Just as with Ribble's HT Ti we reviewed in 2019, the HT 725 is a lovely-looking hardtail. This one is built from steel, though, and comes at much lower price. All bikes in the range (whether steel or titanium) get the same progressive geometry aimed at techy trail riding, and there are three build options for each.

The Reynold's steel frame is sleek and looks great; we love the grey with contrasting purple decals and parts, although our 'R' decal is starting to peel off. 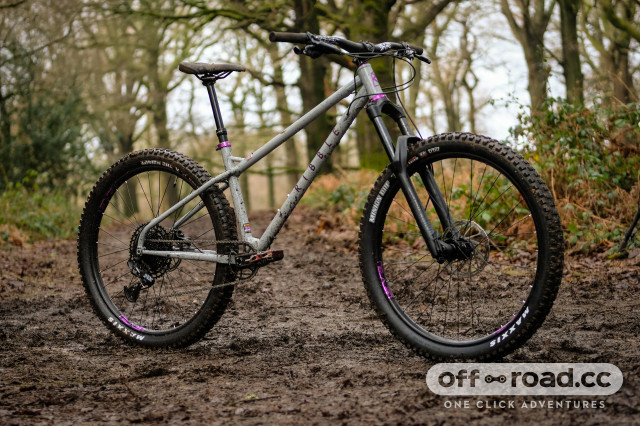 Frame features include clearance for up to 2.6" tyres, water bottle mounts inside the front triangle and a neat seat-stay brace in the shape of the Ribble 'R.' There is full internal cable routing, including for the dropper post, plus extra bottle bosses on the downtube and a threaded bottom bracket too. 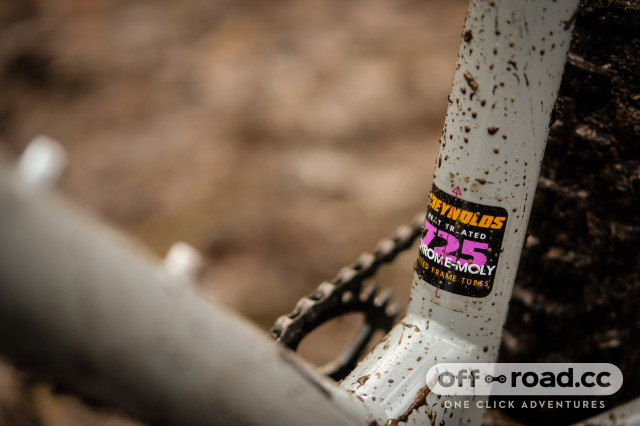 The basic Sport Build comes with a SRAM SX Eagle drivetrain, but as I said, Ribble swapped ours for NX Eagle. The rest is stock Sport Build, and consists of a 150mm Rockshox Recon RL fork and SRAM Level T brakes. 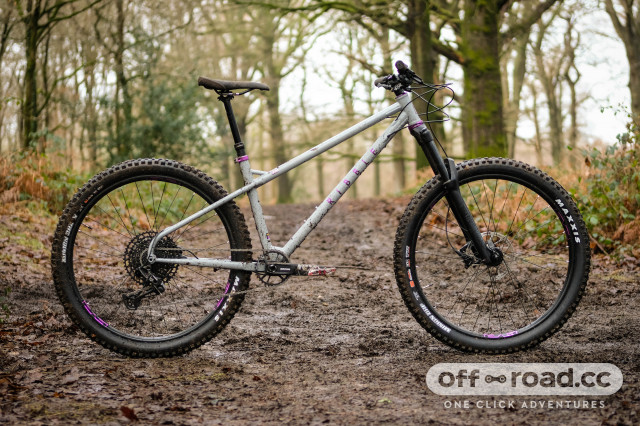 Rolling in the dirt is a 2.6" Maxxis Minion DHF II tyre up front and a  2.6" Minion DHR II at the rear; both have EXO casings and the MaxxTerra compound. 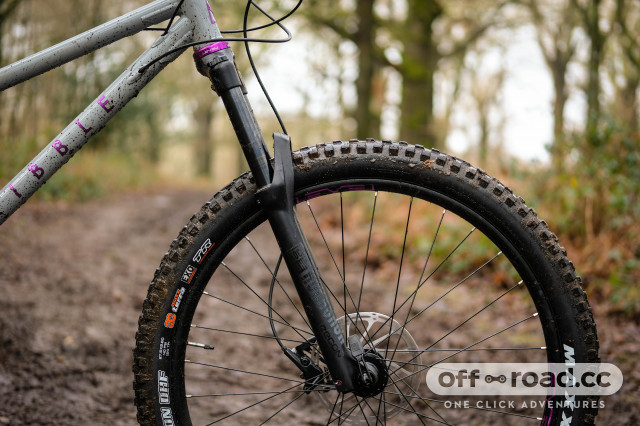 The wheels are from Ribble's own-brand component range, Level. The rims are relatively wide with a 35mm internal width, meaning you are probably going to want to stick to a 2.6" tyre permanently to maintain a good tyre profile. 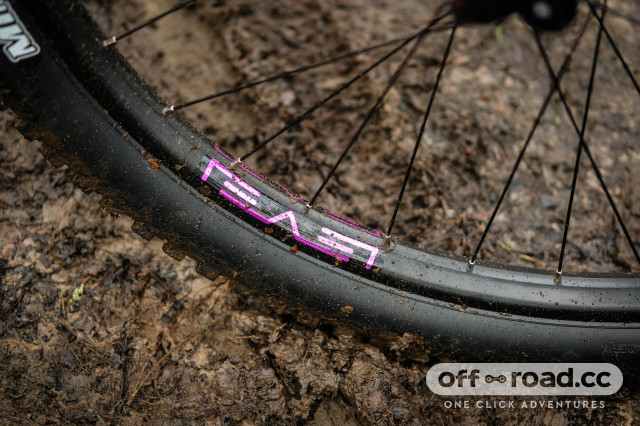 The finishing components are also from Level. There is a Level XL 35mm diameter bar with a comfy nine degree backsweep and a five degree upsweep, and it's paired with a 35mm-long stem. Together they provide a direct steering feel. 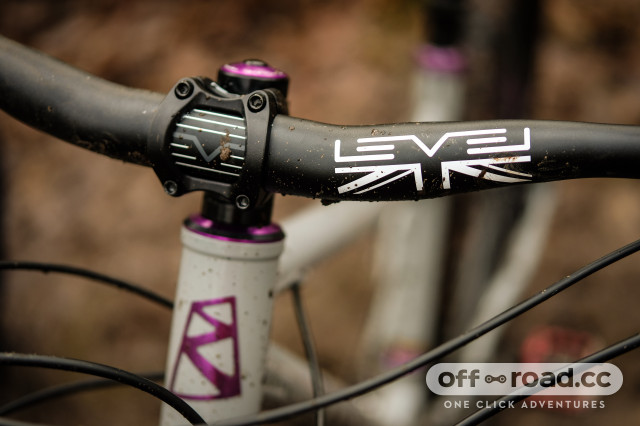 There is also a Level dropper post which, on the medium frame, gives 150mm of drop. While we hit reliability issues with the one on the HT Ti mentioned above, this one behaved perfectly. 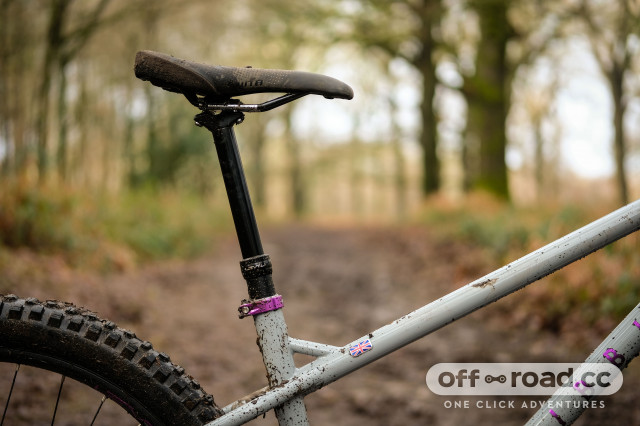 It's a well thought-out build. The tyres are ready for most trails you'll throw at them, although you might consider a tougher casing at the rear to prevent it folding or puncturing, and something tackier – like a Maxxis Shorty or WTB Verdict – for the front if you buy in the winter months.

The geometry is as gravity-fed as the build, with the frame and 150mm fork giving the bike a 64 degree head angle. Reach is roomy too at 455mm on this medium, meaning there's plenty of space to centre yourself on this long bike, and to move around when things get lively. 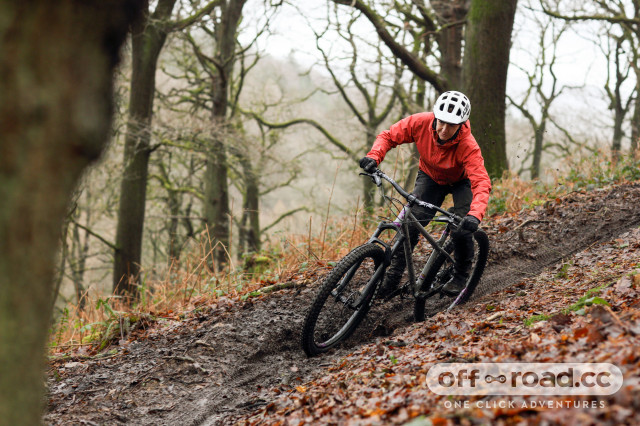 It's not twitchy, it's reliable and predictable – it's happy both at speed in a straight line and pumping through tight corners.

The short seat tube adds to the feel of extra room, too. It's 406mm on this medium frame, giving plenty of room for long dropper posts and getting that saddle well out of the way on the steep stuff. 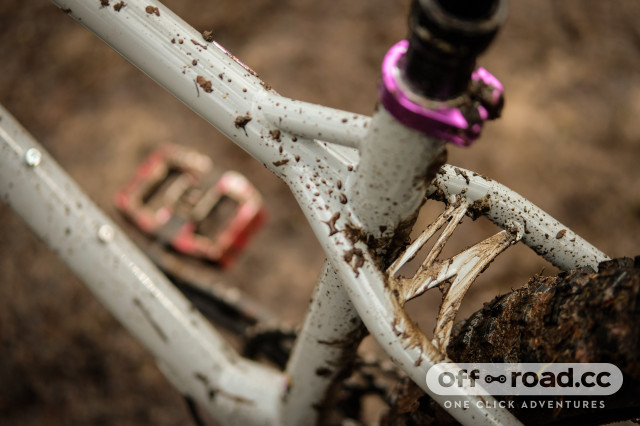 For what's arguably a winch-and-plummet hardtail, the effective seat tube could be a tad steeper. At 74 degrees it's manageable, but the effective top tube is long as a consequence, when coupled to that long front centre.

This left me (at 160cm tall) feeling slightly stretched when seated and climbing. It's harder to keep the front wheel on the ground, and it's tiring to move around the bike searching for traction. 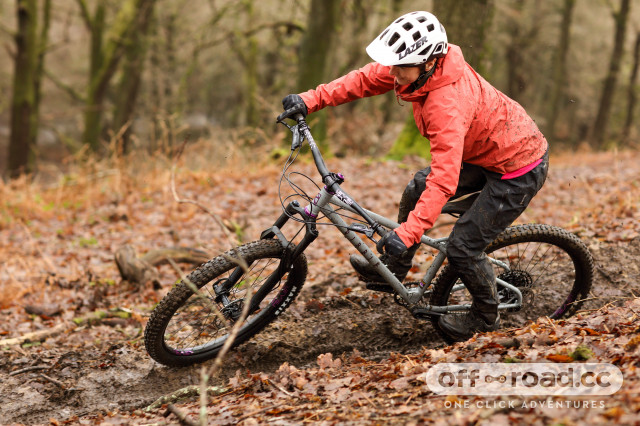 Taller riders won't have the same problem but those that like a longer reach – which the geometry does provide – need to take into account how the bike will feel to sit on too.

OK, it is a hardtail so things are obviously rough at the rear if you're hanging with full suspension bikes, but the steel frame is compliant and gives a respite from harshness over and above that of alloy. Get into a meaningful descent and the HT 725, with its slack head angle, tackles the terrain admirably.

Unfortunately, the fork lets this bike down – it's underwhelming, with flexy 32mm stanchions and lack of midstroke support. 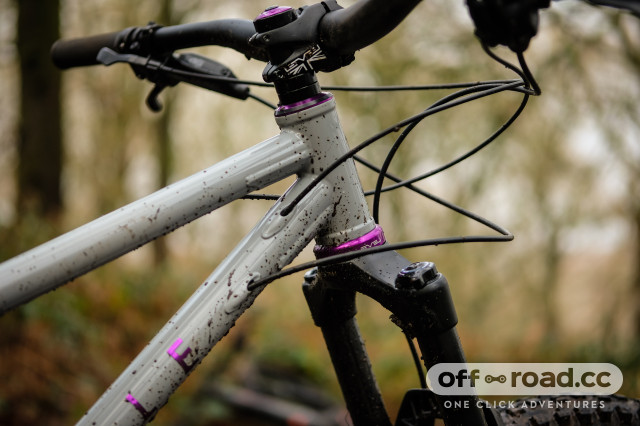 The fact this is a hardtail only exacerbates things as you dive through the travel and the geometry steepens – unnerving and undesirable when the going gets steep, causing you to slow or worse, get offline and unbalanced.

Dialling in lots of compression damping helps create support in these situations, but a stiffer and better-damped fork is the real cure. The Revelation RC found on the Pro Build, for instance, would be a worthy upgrade. In fact, at £2,199 with that fork, GX Eagle gearing and more powerful Guide R brakes, the Pro Build looks the one to beat. 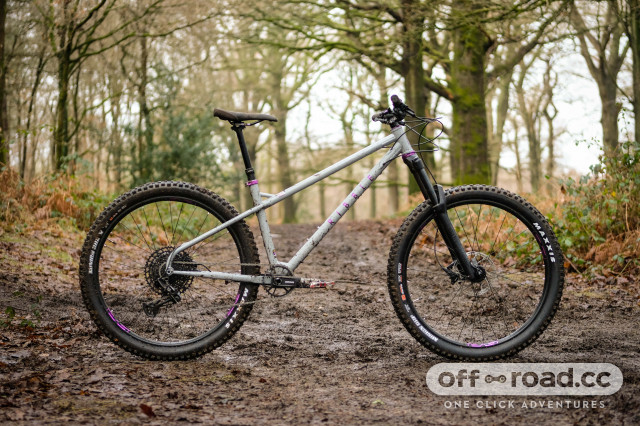 There isn't much to beat the Sport Build if you do fancy the pricier material of steel and a 27.5" wheelsize, though. Cotic BFe builds, for instance, start a great deal higher at £2,574.

You could consider the Ragely Piglet at £1,799, but it has a steeper head angle and a slacker seat angle along with its Revelation fork and SRAM NX Eagle. Though that puts it up against the HT 725 Enthusiast Build, the Ribble has a cheaper Rockshox 35 Gold RL fork.

Also worth considering is the new steel Stif Squatch, a 130mm aggressive enduro hardtail we have in for test right now. The £1,899 version gets a Pike Select+, SRAM's NX Eagle drivetrain and Guide T brakes, Burgtec components, WTB/DT Swiss wheels and Maxxis tyres. If you can stretch another £400 – and are happy with a 130mm fork – it looks mega value.

As an entry point into the hardtail market – if you have a preference for riding down hills – the Ribble is good value in its Sport Build. If you do upgrade anything before purchase, though, ignore the drivetrain and make it the fork. While it's a shame there's no 29er version, the HT 725 really can make very good use of the broad 27.5in hoops it does wear.