Skip to main content
Log In Register
Kona Satori DL Review £3,299.00
A mixed bag of parts, geometry and characteristics the Satori is a trail wannabe with cross country heritage 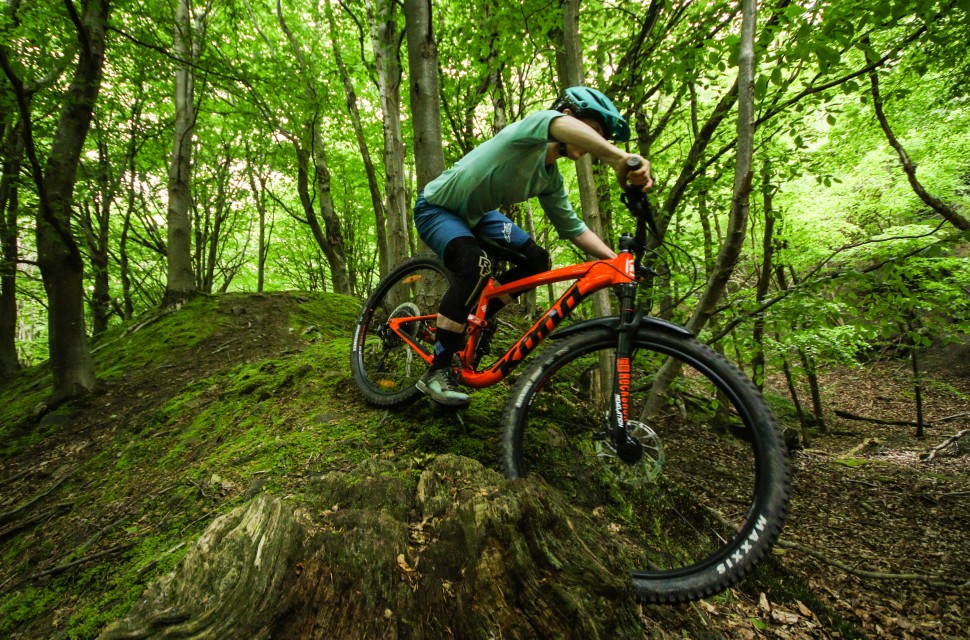 Rachael Wight
|
May 24 2018
|
Overall
Quality
Performance
Value
What's good?
What's not?
Buy if...
If your heart lies in XC but you have a desire for some trail riding forays

Settling in the relatively new category of aggressive cross country, the Kona Satori DL is a mixed bag of parts, geometry and characteristics. On the trail, the Satori is a wannabe; it’s got all the hallmarks of a good trail bike but a harsh suspension set up and steep head angle limits its capabilities to more cross-country pursuits.

The Kona Satori DL is the 29er version of the Hei Hei trail and is a bike the brand says is built for long days in the saddle. It’s a solid build, if not particularly good value, the only thing we’d swap out straight away is the rear tyre, the Maxxis Tomahawk isn't ideal for sloppy UK conditions. Starting from the top the Satori DL had a spec list that wouldn’t look out of place on a full-time trail bike.

It 's fitted with 140mm Rockshox Revelation RC forks; the relatively new version that use a Pike 35mm chassis with the more basic Motion Control damper you’ll find in a Yari RC. The 130mm of rear suspension is controlled by way of a linkage driven single pivot set up that uses flex stays instead of a seatstay pivot, controlling a Rockshox Deluxe RL shock with Trunnion mount. 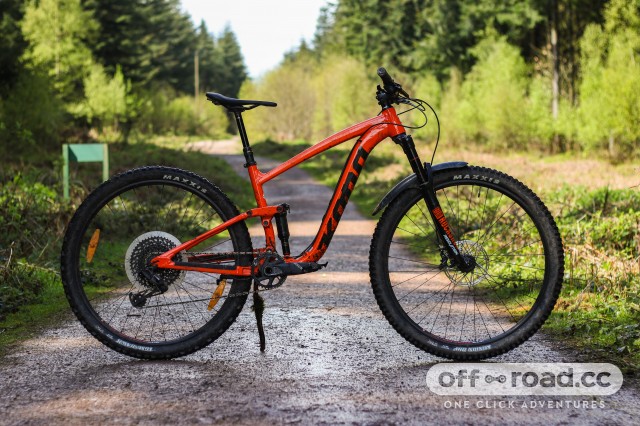 The groupset is all SRAM gear with a 12 speed GX Eagle drivetrain with four-pot Guide R brakes. The Eagle cassette is paired with Descendant 6K cranks and a 34T chainring which in my opinion is a tad steep for a 29er. Although, you’ll be unlikely to spin out on the flat on this bad boy it does mean that you never really get the full advantage of the crawler 50T cog. 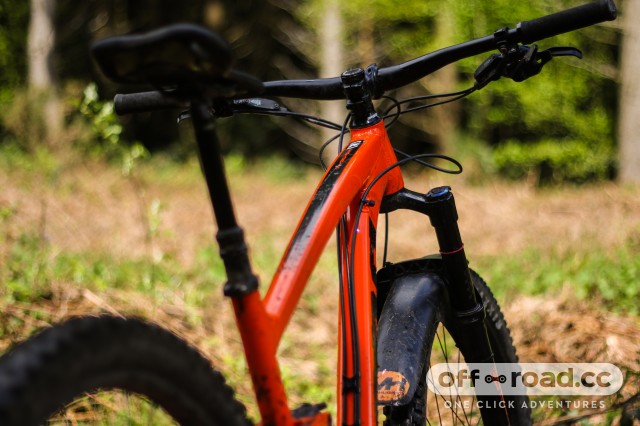 Brakes such as the Guide R are uncommon on this more cross-country themed bike. That’s not a complaint though, it’s nice to have the stopping power but maybe speccing less powerful and more appropriate Level T brakes could have saved a couple of pounds on the steep £3,299 price tag. 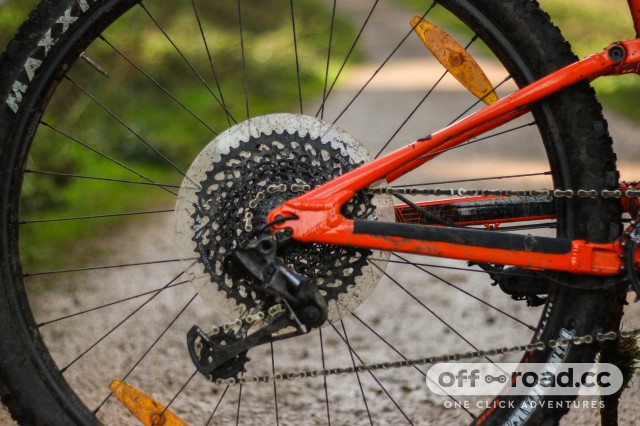 As you’d expect there is a Reverb dropper post but it’s only 125mm long and has the plunger style remote rather than a shifter lever style. I wasn’t able to get full insertion of the post into the seat tube which is likely the reason for not speccing a longer dropper – smaller riders wouldn’t be able to get the post low enough in the frame due to the linkage pivot obstruction. 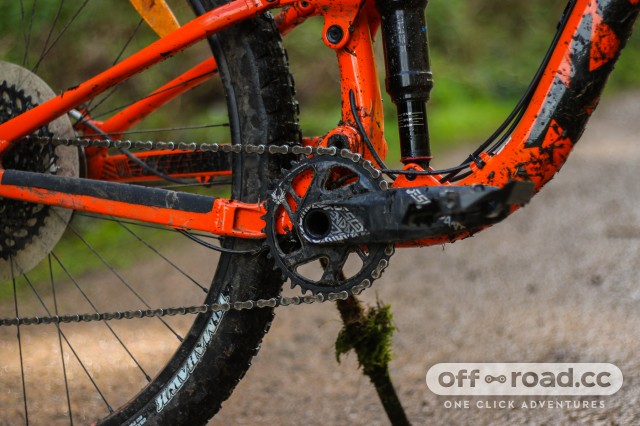 The cockpit of the Satori DL is a great looking affair with a Matchmaker integrated clamp on the right keep gear lever and brake clamp tidy. The Kona XC bars are a nice and wide 780mm and the stubby 35mm stem is neat and tidy. 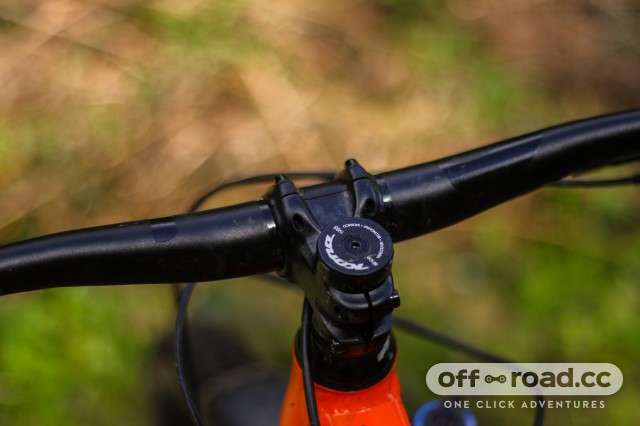 Down on the ground, the Satori DL sports the relatively wide WTB i29 rims coupled with Formula hubs. The rubber comes in the form of a Maxxis DHF on the front and a Tomahawk on the rear. At this price point we’d like to see a tackier 3C DHF on the front and, well, anything else on the rear for UK riding - a DHR or a High Roller II would be a good choice for more braking traction. 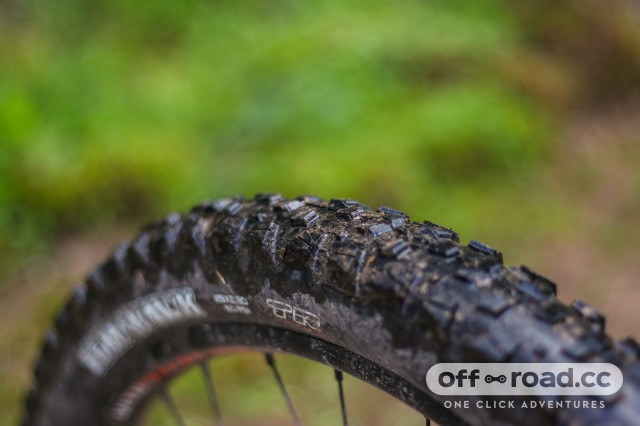 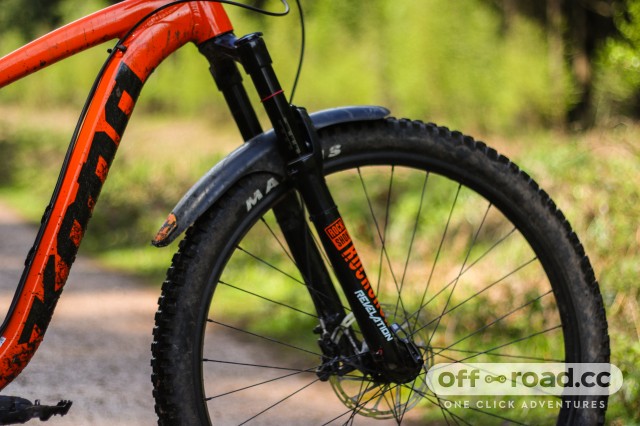 The good spec means that the Kona is ride ready straight out of the box, with the gear working seamlessly together. On the very first ride, I was acutely aware of how close I felt I was to the bars when climbing. This is due to the short effective top tube caused by the steep effective seat angle, which, whilst we are on the subject is super steep at 78°. 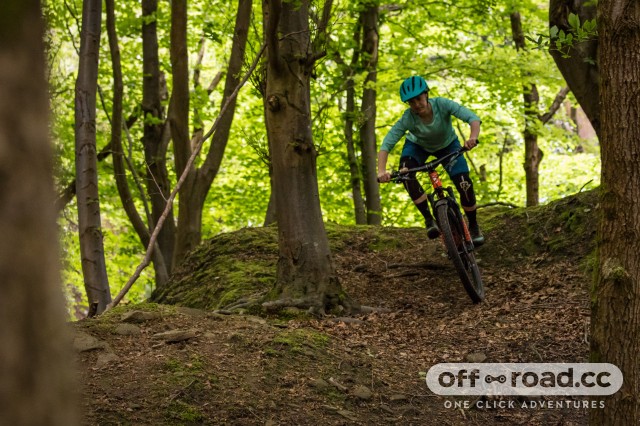 Big props given to Kona for being so bold as to employ such a steep angle where other brands shy away - it makes climbing aboard the Satori a pleasant affair. It's efficient, making it a bike that you really won’t mind taking on long arduous climbs or short punchy sprints alike. The firm suspension platform aids the proficient climbing characteristics on smoother ground but over more technical terrain it fails to track the ground as well as other more sensitive setups, like the Transition Smuggler for example.

The reach of the bike is relatively long for a medium size bike at 450mm but due to the short effective top tube it still felt like I could do with a tad more room when seated. On option would be to size up a bike but the seat tube would then be too long for me. Kona could easily stretch out the top tube on this bike (and therefore the reach and wheelbase) and only make a better bike for both climbing and descending. 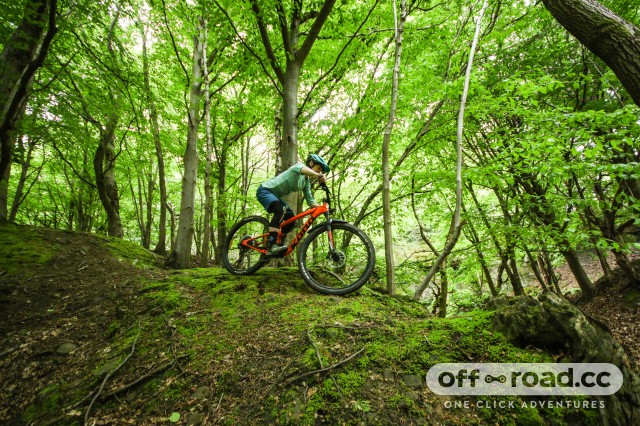 On the flat, I did find there was rather a lot of weight placed in my hands due to that effective seat angle putting my weight towards the front of the bike. It’s a feature that could become tiring if you were putting in the long distance miles, but one that is negligible if all your riding involves working on an incline, winching up hills and descending again.

With plenty of energy left at the top of the hill, I was gagging to get going back down again. The Satori DL is happiest on flatter, less technical trails, where the steep head angle of 68° provides a slightly twitchy ride. That’s not to say this bike won’t take on the steeper trails too, it will, you just need to be prepared for some more ‘bum clenching’ moments! 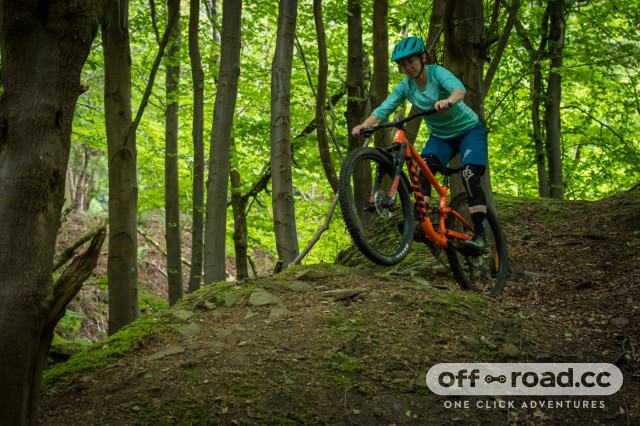 With a roomy reach and a longer wheelbase than found on other similar bikes, as a comparison take the new Specialized Stumpjumper ST 29er (reach 435mm and wheelbase 1161mm on a medium bike), the Kona was a hoot down my local trails. It was responsive and nimble and encouraging to turn the speed up in twisty singletrack. It’s a bike that inspires you to put those extra pedal strokes in as you whip between the trees. 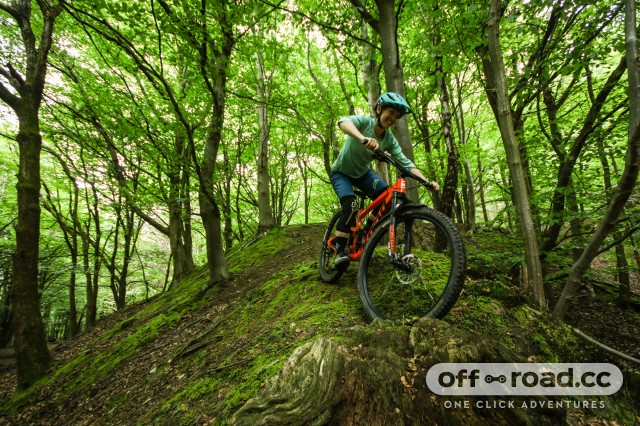 Take the Satori DL on rougher territory or over drops and jumps and the cross country vibes shine through. The suspension is firm at best, I had to run 20% sag to get the amount of end stroke support I needed. With three volume reducers inserted as standard, there was no option to add to this and increase bottom out support that way - three is the maximum there is room for. Running less air and therefore less sag, the Satori was more comfortable in the chop with better small bump sensitivity but it bottomed out over the smallest drops or the slightest compression. 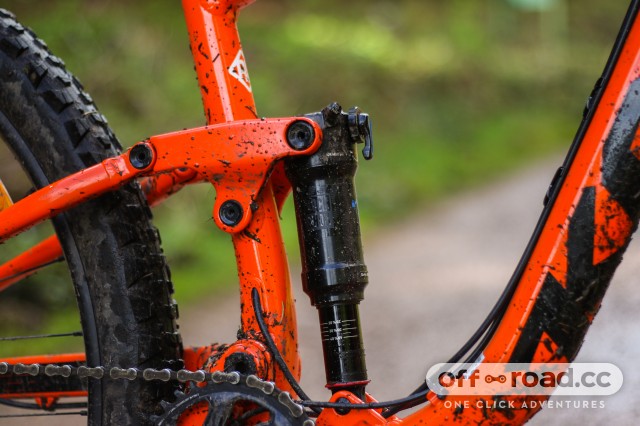 With elements of both the brand's long travel Process and short travel Hei Hei thrown into the design of the Satori, it’s a mish-mash of riding genres and intentions. On the outset the Satori looks to be the perfect trail slayer. There is an Eagle drivetrain and a steep effective seat angle to help you up any climb, four-pot brakes to slow you efficiently, an aggressive front tyre and a neat cockpit with short stem. But look deeper and you’ll find the short effective top tube provides a cramped cockpit when seated, the steep head angle makes steeper terrain more daunting and the steep effective seat angle puts a great deal of weight on the hands when on the flat, making the Satori a confusing build that is not so much playful or aggressive cross country as a fundamentally confused soul searching for a home in trail bike territory. 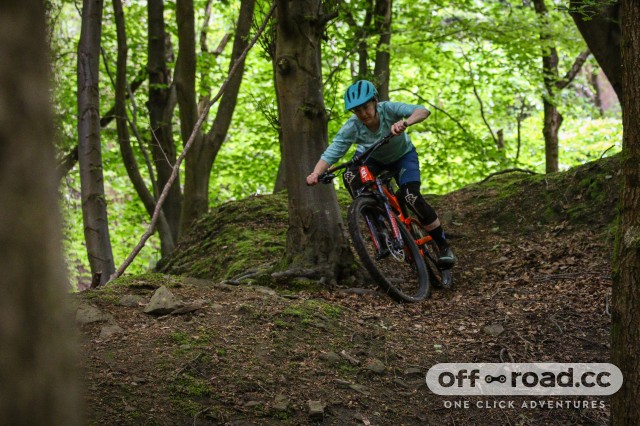 Paddy White the Product Manager at Kona says "The seat tube angle is steep and subsequently the top tube length seems short, but by comparison the Satori reach numbers are noticeably longer than the Hei Hei’s, our short travel XC bike, we feel they are long and comfortable, stable and responsive for a short travel bike.”

Which indeed they are, stepping in the longer and more stable direction when the rider is out of the saddle but there isn’t really enough room when seated. The Hei Hei trail has a slacker effective seat tube angle and therefore a longer effective top tube than the Satori which will equate to a roomier feeling when seated despite the shorter reach.

Paddy went on to say: "The Satori does come from our XC line of bikes, so a 68 HTA on a 29er is a good balance of stability on a bike like this. Call it “Playful XC”. 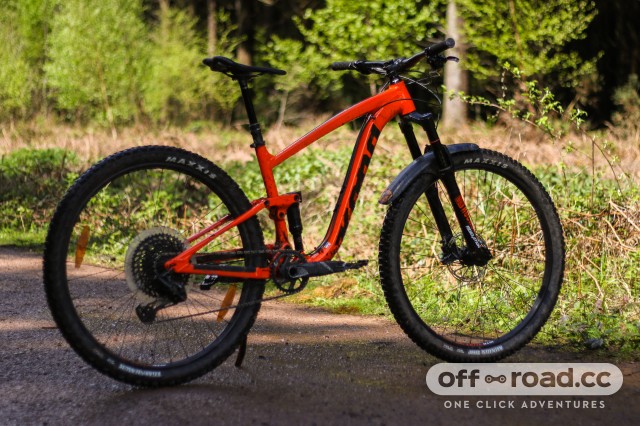 So, if your heart lies in cross-country but you have a desire for trail riding forays then you and the Satori might be well matched. You can churn out the miles and the metres of elevation with ease then indulge and nip off for a quick trail spin when no-one is watching; just don’t expect to be slaying the steeps or conquering the rough with the finesse of some other dedicated short travel trail bikes.

Kona say: 'If you love the feel of a 29er and the get-up-and-go of the racy Hei Hei Trail DL, the Satori DL is the perfect companion. With a custom drawn aluminum frame and FUSE rear end, the Satori was built from the ground up to ride like the wind. Featuring a SRAM GX Eagle drivetrain, RockShox Revelation fork and custom tuned Rockshox Deluxe RL Solo Air rear shock, the Satori DL has everything you need for big days in the saddle."