Skip to main content
Log In Register
Kona Big Honzo DL review (2019) £1,800.00
A good handling trail hardtail, but it's very pricey, hefty and the 2020 version has a much more sorted spec 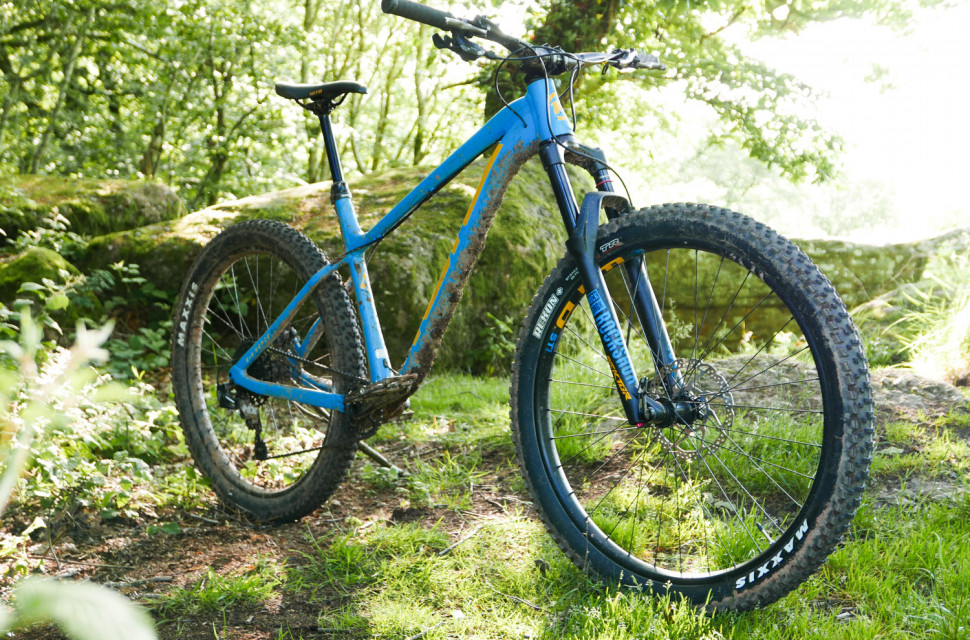 Jon Woodhouse
|
Jul 30 2019
|
Overall
Quality
Performance
Value
What's good?
What's not?
Buy if...
You can find a good deal and budget for some upgrades

Kona's Big Honzo is a fun, Plus tyred hardtail that packs in well-balanced geometry, an engaging ride and a spec that's generally functional, if low-rent. This 2019 bike lets the side down with sketchy tyres and budget brakes amongst other gripes which make it hard to recommend, but the 2020 update looks much more promising.

At the heart of the Big Honzo is a shapely aluminium frame that offers impressive standover clearance thanks to a low-slung top tube. It's built for a 130mm travel fork in the tapered headtube, the through-axle back end is Boost-spaced and it's made for a single chainring only - the original Honzo being one of the earliest adopters of that feature.

The frame can take either 29" wheels (as the regular Honzo DL) or 650b items shod with fat Plus tyres, as with this Big Honzo DL; I opted for the latter for a bit of extra cushion from the higher volume rubber. The difference between the two, apart from the wheels and tyres, with the big wheeler getting a shorter travel 120mm fork and 0.5° steeper head angle too.

Great geometry and a fun ride

Talking of geometry, Kona has always erred towards the more progressive side when it comes to frame geometry and the Big Honzo has a set of numbers that are very respectable, with a decently long reach of 475mm for a large frame paired to a 75° seat and 67.5° head angle. 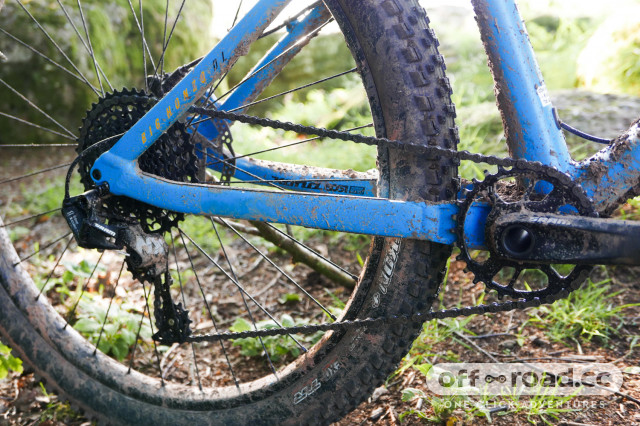 That means the Big Honzo strikes a good balance between being agile enough to make flatter trails fun and engaging without turning into too much of a twitchy handful on steeper terrain. The head angle isn't hugely relaxed, but with only 120mm of fork travel, there's not enough dive under braking or big weight shifts to make that too much of an issue, while the pretty generous reach keeps your weight centralised and the seat angle doesn't cast you too far back on climbs.

I personally like a pretty short chainstay and the 430mm items on the Big Honzo do mean that it's willing to hop, pop and chop through whatever you choose to hurl yourself into in a very entertaining manner, offering handfuls of hardtail fun if you're willing to put in the work.

The big 2.8" Maxxis Rekon tyres certainly do take the edge off the frame, which certainly feels plenty sturdy and lets you know that by giving you a thorough solid beating of hands and feet. The rather chunky looking chainstays and flattened-but-not-actually-that-flat shapely seat stays are likely to be the culprits, but it's par for the course with hardnut aluminium hardtails. 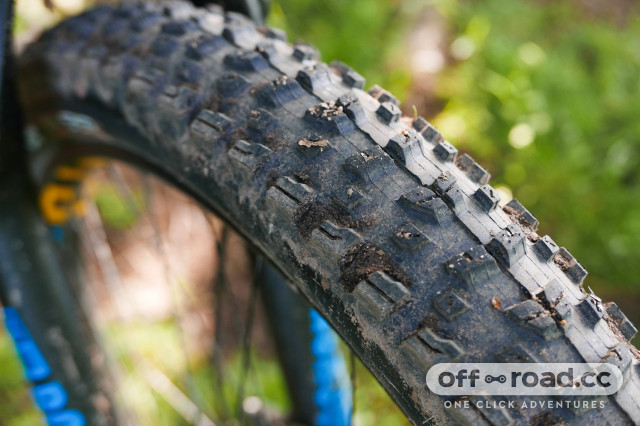 Sadly, the tyre's shallow tread pattern doesn't offer much confidence on anything apart from hard-packed and preferably dry trails, with the front, in particular, lacking any sort of edge or bite. In mildly greasy conditions, it looses friction with such alacrity that I started to suspect that perpetual motion machines might be possible.

Happily, the 2020 model sports a much chunkier Minion DHF at the front, which offers substantially better cornering traction in loose terrain without too much of a rolling resistance penalty elsewhere - or you could plump for the regular 29" Honzo DL which has more aggressive if much less voluminous rubber.

The WTB wheelset is tubeless-ready however and provides a solid wheelset, though the cup and cone bearings of the Shimano hubs will need regular attention to stay smooth. At 13.7kg it's never going to skip up the hills, either. 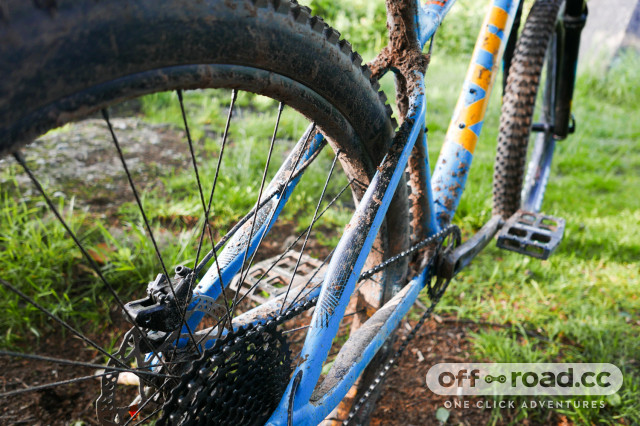 The new bike also offers wider range gearing, with a 12-speed SRAM SX Eagle groupset rather than the 11-speed NX group on this bike. The clunky levers of the Shimano non-series brakes - disappointing to see on a £700 bike, never mind one that costs a grand more - are switched for updated version too, but it does appear that the three-finger lever remains. Hopefully, the power is improved too, as there's more gum than bite as it stands.

The RockShox Sektor fork up front is a decent enough budget performer but easily outclassed in terms of steering accuracy and damping control by the brand's Revelation or Fox's GRIP damped 34 forks that are seen on most rivals around this price. Again, the 2020 bike sees an update to a RockShox Revelation RC, which is a very welcome move. 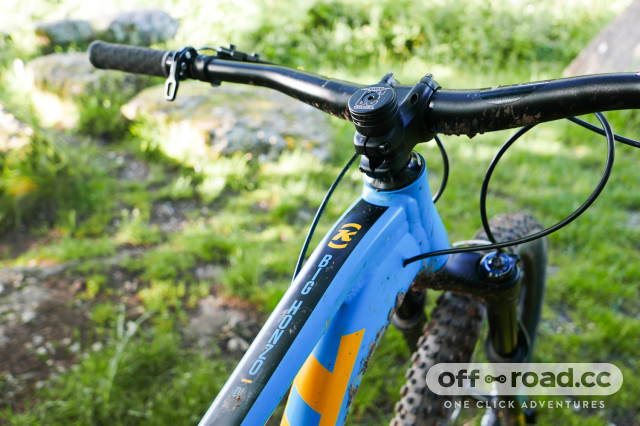 Kona's own-brand finishing kit is all pretty good though, with a nicely wide bar and dinky stem offering good control. While the Tranz-X dropper post doesn't offer a huge amount of travel and has a horrible remote, it's generally pretty reliable and finding a better aftermarket lever won't be hard.

It's rather telling that Sonder's £1,299 Transmitter NX 1 Revelation has a broadly comparable - and often better - spec and weight for a full £500 less, while similar money rivals from other brands offer substantially upgraded kit for the same money.

Nukeproof's Scout Comp comes in both 29" and 650b versions with the latter rolling on fat 2.6" tyres with clearance for up to 2.8". It's not as progressive on the geometry front, but you get a RockShox Revelation RC with Charger damper, an NX Eagle 12-speed groupset and numerous other upgrades across the board.

Ragley's steel-framed Piglet also offers new-school geometry, but you get the utterly solid if unfashionable Shimano SLX 11-speed groupset - including brakes - plus a Revelation RC fork and chunky WTB tyres in a soft compound on RaceFace rims for the same cash. 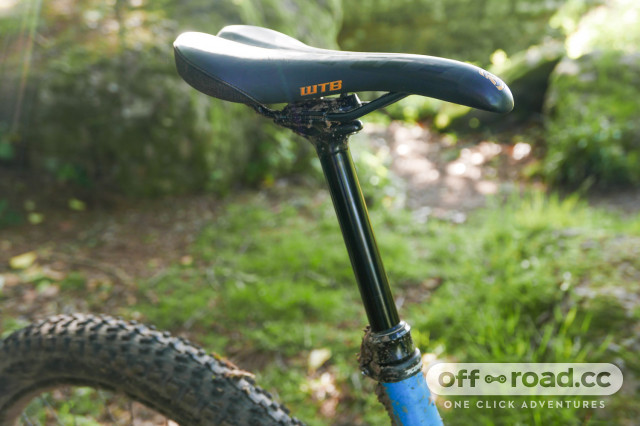 All in all, Kona's Big Honzo delivers when it comes to handling entertainment, with a fun but planted ride that'll tackle everything you can reasonably expect from a trail hardtail. Sadly, the spec shoots that promise down with a front tyre that waves the white flag at the sight of mud and kit that'd be more at home on a bike costing half as much as this.

Happily, the just-released 2020 lineup seems to address many of these issues, with a better fork, more aggressive front tyre and all-round component upgrades that, while not shunting it into stratospheric value, certainly makes it more of a threat to similarly priced rivals thanks to the sorted geometry, whichever wheel size you might choose.

As it stands, it only really makes sense if you can find a good deal and don't mind making a few upgrades, with tyres, brakes and fork, which is a bit of a shame.