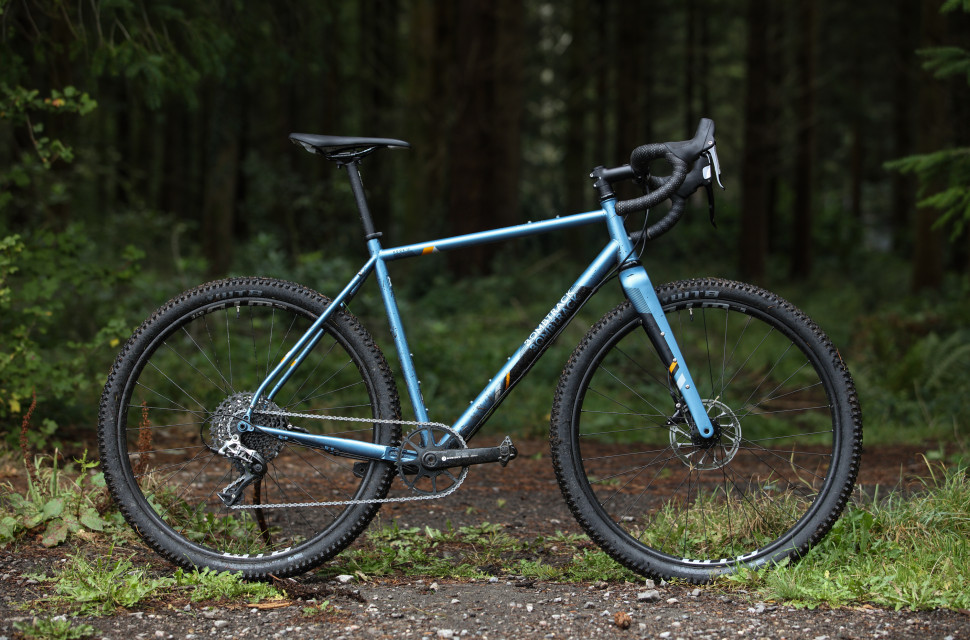 Stu Kerton
|
Oct 18 2021
|
Overall
Quality
Performance
Value
What's good?
What's not?
Buy if...
You want a load lugger that has the capabilities of a gravel racer

With a large tyre clearance and plenty of mounts, the Bombtrack Hook EXT is a hugely versatile machine. It manages to offer an impressively fun and nimble approach to the tracks and trails regardless of whether you are riding it loaded up for an adventure or smashing it around stripped back. It’s like a cyclocross bike on steroids! 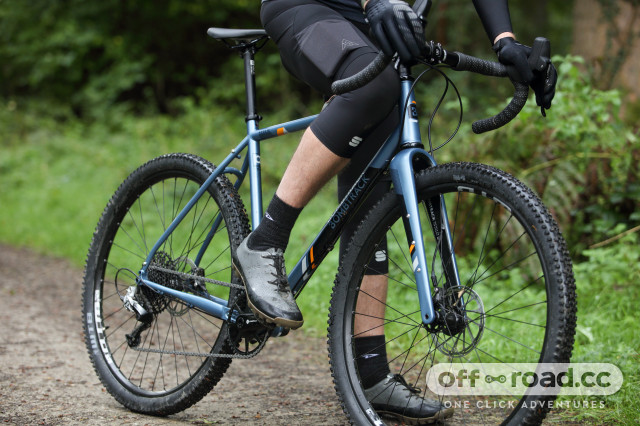 You really shouldn’t be able to flick an 11kg dropped bar bike around like you can with the Hook EXT; it’s an absolute laugh. It just feels loads lighter than it actually is. Carry or push it up a hill, and the heft is there, but under pedal power, it feels like a good couple of kilos lighter. 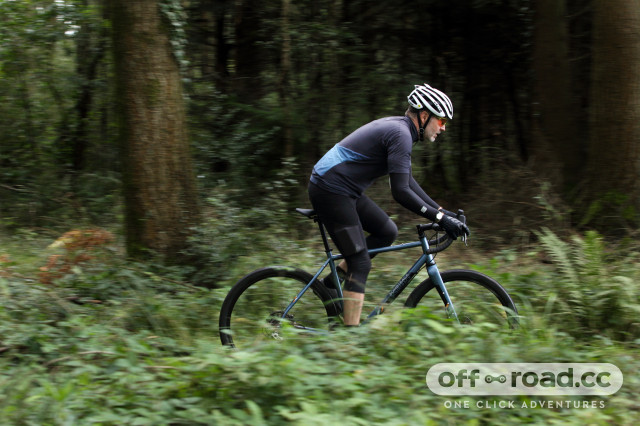 On my first ride of around three hours, a loop on a whole range of surfaces, the Bombtrack didn’t really make its fun nature noticeable; after all, it’s a 2-mile steep road climb pretty much from my front door to the gravel tracks. 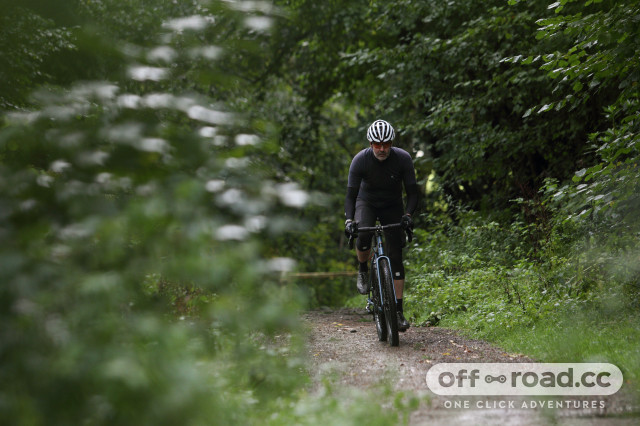 It never felt a drag, though, something that I’d put down to the wide-ranging 1x drivetrain setup. However, I toiled up the climb with the plan of cruising around the planned loop and enjoying the scenery. On that first descent, though, when the tarmac gave way to the wide gravel military tracks of Salisbury Plain, I had a massive smile on my face.

The hardpacked surface of this section is created from very large aggregate, and wide tyres help you get the most out of it, and that is exactly what the 2.0” 650b tyres fitted to the Hook did. With the chunky rubber allowing me to let the EXT go without worrying too much about my line through the potholes, I could focus on the handling and the poise created by the Hooks’ geometry. 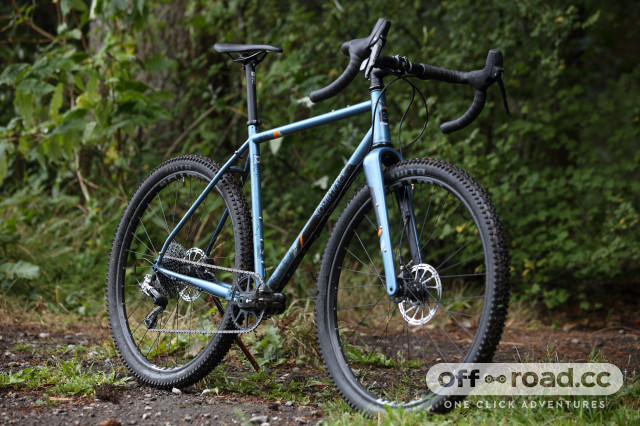 It’s a confidence-inspiring bike indeed, and I felt like I could just let it go with just the lightest of grip on the handlebar. With a steeper head angle than many gravel bikes at 72°, the front end feels pleasantly direct and quick, yet not so much that it can become twitchy or a handful on looser surfaces. The wheelbase is lengthy enough to provide stability while at the same time keeping the ride and handling in the fun zone.

Even with those big tyres squishing around beneath you, there is no denying that the Hook has a great ride quality from the steel frame and carbon fork. There’s loads of feedback on the technical sections, and pairing that with the spirited front end, a quick dart down through the local tree-root strewn singletrack became a favourite pastime. 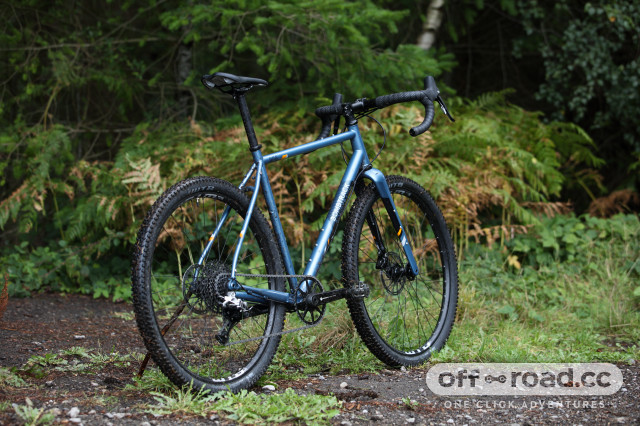 Coming from a road background, I found the combination of a shortish headtube (150mm/medium frame) and lengthy 556mm top tube ideal, allowing me to get low at the front with a stretched-out position for fast sections of trail or track, fully exploiting the drops when necessary. 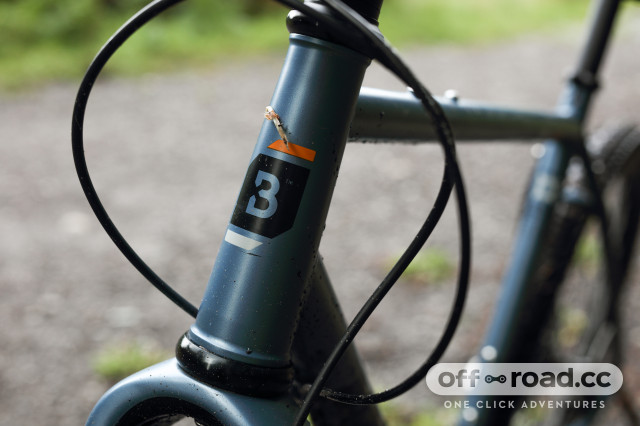 Loading the Bombtrack up with frame, bar and saddlebag - adding another seven or eight kilos - it doesn’t really change that much. Even with plenty of weight sticking out the rear of the bike, the front end never feels unsettled. While I did ease back a touch on the kamikaze descending, the Hook felt just as agile through the bends and when cruising along.

While a steel frame can’t offer the same massive tube and bottom bracket junctions as a carbon offering, the Hook still delivers on the stiffness front. Climbing out of the saddle doesn’t really give any feeling of flex around the bottom bracket, while the tapered head tube and full carbon fork keep the front end feeling tight.

Overall, regardless of how you are riding, the Hook EXT is a very pleasant place to be.

Bombtrack have chosen to make the frame using Columbus Cromor double-butted steel tubing. Not a tube set I've ridden before, I don't think, but as I said earlier, it's a very pleasurable experience, and It's a good looking frame too.

Some tubes, like the seat tube, top tube, and seatstays show a classical look, while the tapered head tube and oversized down tube giving a modern, chunkier look. It's a great balance, especially alongside those all-black 2.0" knobbly tyres.

Bombtrack has gone with a T47 standard bottom bracket and an 86.5mm shell width to suit their own 30mm diameter spindle crankset which no doubt has helped on the stiffness front. 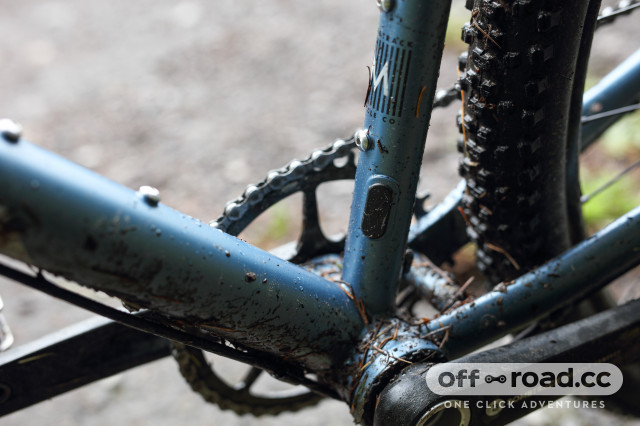 The whole thing is neatly finished, too, with tidy welds, and the anodised paint finish is tough wearing. It’s no lightweight, though, with a large frame size coming in at 2,710g and a fork weight of 600g, including 300mm steerer tube and 12mm thru-axles in both.

The Hook does come with a 180kg weight limit, including luggage, which is pretty impressive.

When it comes to loading up that luggage, you’ll be pleased with the number of mounts the Hook EXT comes with. On the frame, you’ll find triple cage mounts on both the down and seat tube to allow you some adjustability for differing bottle sizes or to help you accommodate bottles with frame bags fitted. 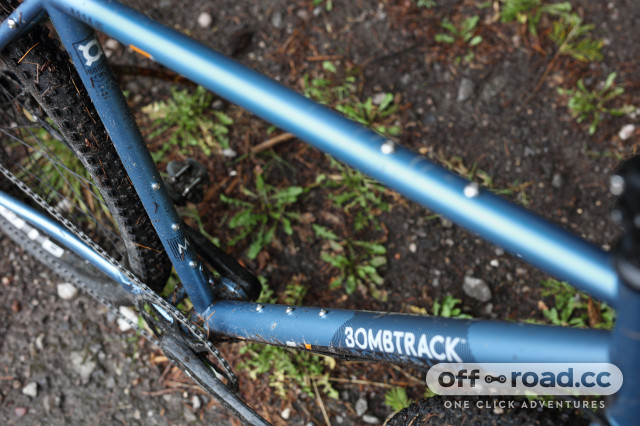 There are also bottle cage mounts underneath the down tube. On top of that, there are mounts for rack/mudguards and mounts for a top tube bag. 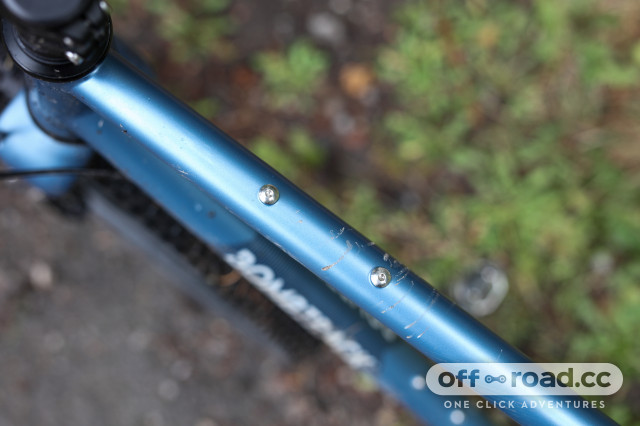 The fork also has triple cage mounts on each leg and there is internal routing for a dynamo cable that tallies up with the frame, exiting near the new light mounting point above the seatstay bridge.

You'll find a dropper post port on the lower part of the down tube too. 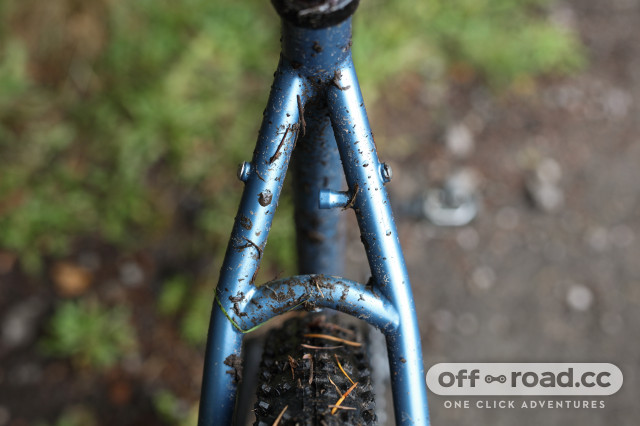 Tyre clearances are 52mm on a 650b wheel for both the frame and fork, though if you are running 700c you’ll be limited to 40mm on the rear with 45mm possible on the front. 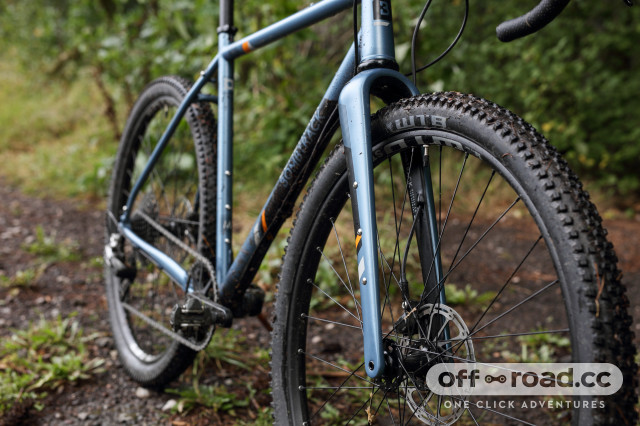 The largest rotors you can run are 160mm diameter and a 44T chainring is the upper limit on a 1x system or 50/36T using a 2x setup, both with a 45mm chainline.

The Hook EXT is available in five sizes, with our medium sitting in the middle of that line-up. I’ve touched on some of the geometry, but I’ll give it another run-through; there is also a full chart on Bombtrack’s website.

A chainstay length of 425mm gives a wheelbase of 1,025mm when taking all of those other measurements into account. Stack and reach are 589mm and 387mm, respectively.

The EXT is based around a Sram Rival groupset speccing an 11-speed 11-42T cassette, long cage clutch rear mech, and mechanical shifters.  For stopping duties, the Bombtrack uses 160mm rotors alongside the rival flat-mount hydraulic callipers. 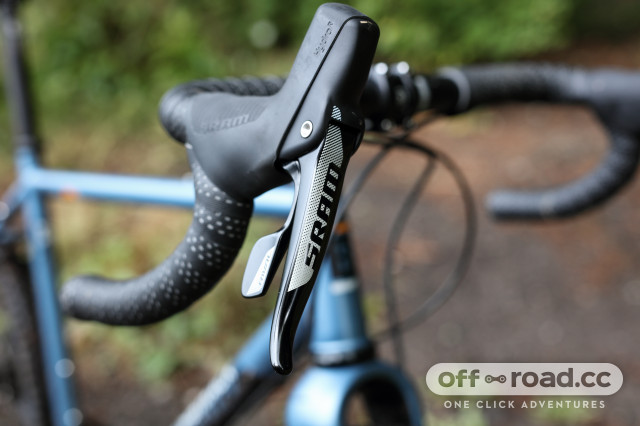 A shift away from the Rival though is Bombtrack’s own Lyer forged aluminium crankset, which uses a direct-mount interface for the 40T chainring. 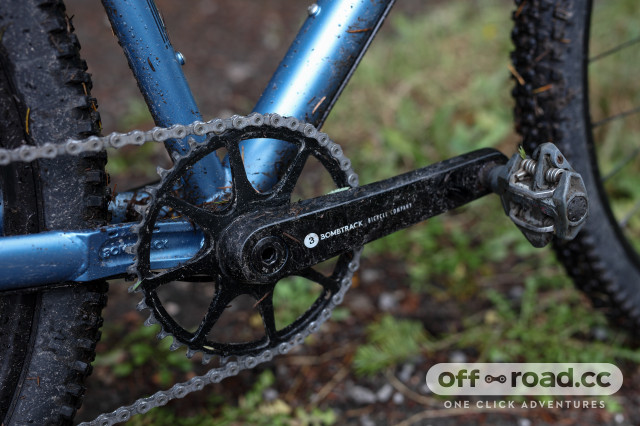 Gear shifts are carried out with the usual Sram efficiency and precision, while the clutch rear mech does a great job of keeping the chain in place. I found the gearing to offer a decent spread for the type of riding I do, which tends to be flowing trails with long draggy hills rather than those that tend to be short and sharp. 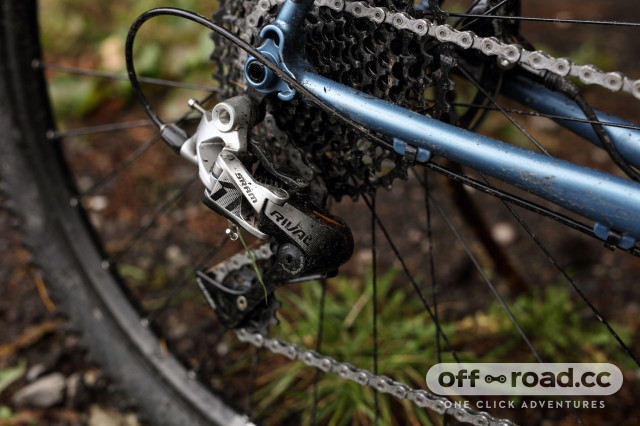 If you are going to use the Bombtrack on the roads a fair amount, especially with slick tyres, you might find it a little ‘spinny’, though. 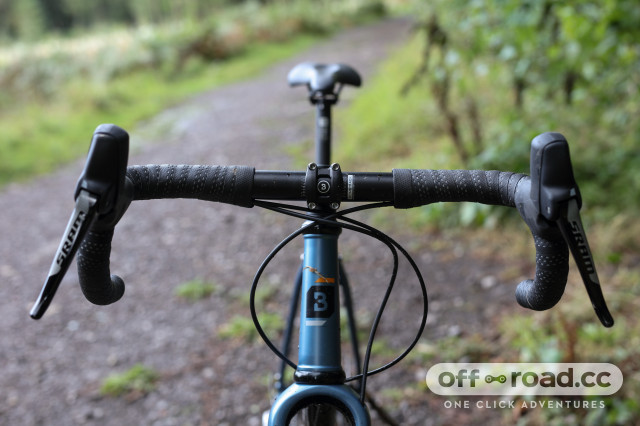 Bombtrack supply the majority of the finishing components with their Roam alloy stem and YEW seatpost. Their CX-10 handlebar is pleasant to use thanks to its shallow 116mm drop, keeping it well within reach of those of us with little flexibility and the 10° flare adding an extra 46mm of width to the 420mm at the hoods for increased stability when using the drops at speed.

For a bike with this sort of capabilities, you are going to need a strong set of wheels, and I had no issues with the build found here. WTB ST Light i25 double-wall, TCS 2.0 rims with 32 spokes front and rear mated to Bombtrack’s Tau sealed disc hubs. 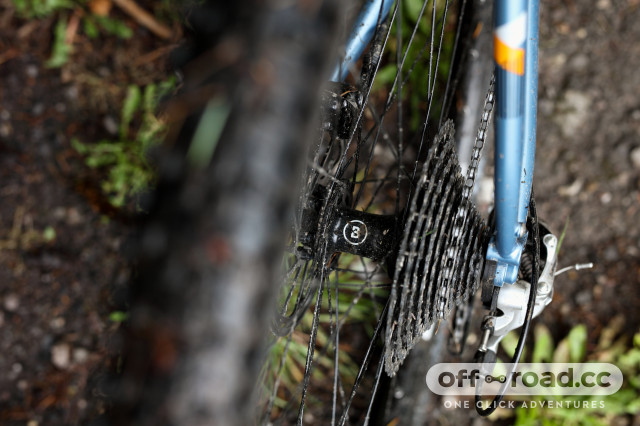 They saw plenty of abuse over the lengthy test period, not only from the terrain but also the weather. I tend to ride my tyres firmer than most, so my wheels take quite a kicking, and even after countless rides in the wet weather through mud, chalk, gravel and sand, everything was still running smoothly and without any graunching noises. 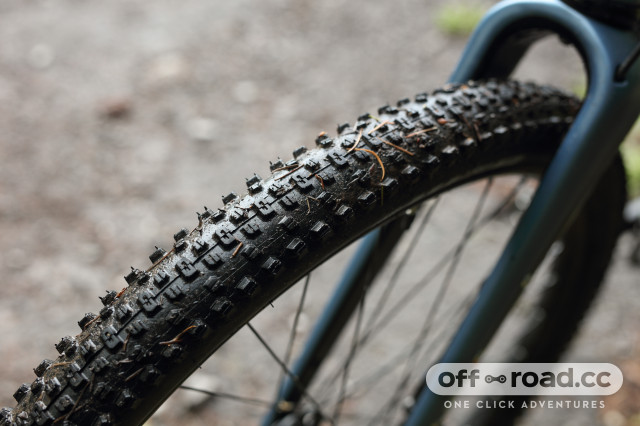 Tyre wise WTB have also been chosen, their Ranger TCS model, which I found to be more capable than most other gravel tyres in typical UK conditions. With a decent amount of shoulder tread, I found them to give confidence in the bends, and the central tread gives enough bite on all but the sloppiest of trails. They don’t feel sluggish on any terrain, and I had no issues with punctures or cuts to them even when we entered the hedge-cutting season.

The Hook EXT currently retails for £2,400, which offers decent value overall, or you can have a frameset for £815. For an extra £49, though, you could get a Fairlight Secan 2.0 with GRX 600 1x and a similarly built set of wheels; now that is some tough competition.

I was also impressed with the Kona Rove LTD when I reviewed it for road.cc not so long ago. It had a great steel frame, large tyre clearances and plenty of mounting points, just like the Hook EXT for its £2,399 asking price. It does come with a Shimano GRX 810 groupset, which I’d say offers better performance than Sram’s Rival.

So, money-wise the Hook isn’t exactly screaming bargain, but neither is it taking the mickey when you compare it to the competitors.

Overall, I was really impressed with the Hook EXT. Looking at the spec sheet and weight, I really wasn’t expecting such a spirited ride from it regardless of how it was loaded up, and on those days when I just wanted to get out there and smash it, I had a great laugh!

It’s a clever balance to deliver a bike that just works regardless of what the rider is asking it to do, but Bombtrack seems to have achieved that without really having to settle for compromises.

Bombtrack say, "The Hook’s hoodlum tendencies given free rein. Using a Columbus steel frame, dedicated carbon fork, and lively 27.5-inch wheels, the EXT can batter through territory out-of-bounds to other drop handlebar bikes. Backed by Sram’s 1 x 11 Rival groupset, this provides both the gearing range and braking power needed for extreme riding. Adding more build options, this year sees the addition of an integrated rear light mount. As capable on backcountry campouts as it is on post-work blasts, the Hook EXT remains the choice when you’re unsure of the terrain, but know you want to have fun riding it." With decent tyre clearances and a robust frame the Hook ETC is highly versatile, and surprisingly nimble which means it is just as much fun to ride on the local singletrack as it is when laden for an adventure.

A well made frame with smooth, neat welds and a robust paint finish. The quality of the fork is also very good offering plenty of stiffness in the direction it needs it.

It is a very capable gravel bike that is more versatile and rugged than some in the marketplace.

Feels much lighter than it actually is.

Rear tyre clearance to match the fork would be great.

Overall, I found the Hook ETC to be the gravel bike that I could grab whatever the type or length of gravel loop I was about to head out on. It can really cope with many types of riding and I found that the fun and excitement is backed up by great build quality and good levels of comfort.