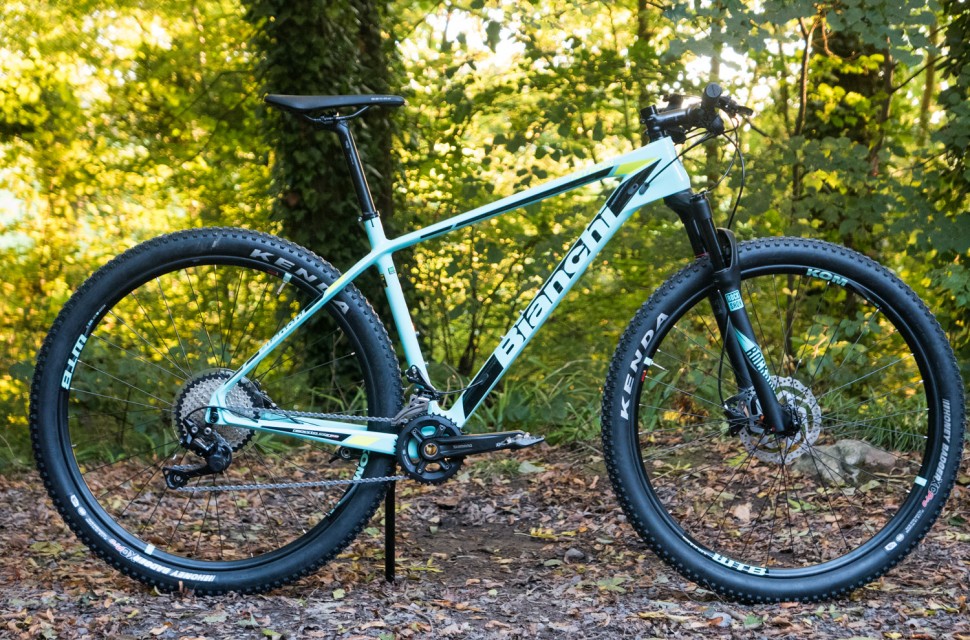 Jon Woodhouse
|
Nov 6 2018
|
Overall
Quality
Performance
Value
What's good?
What's not?
Buy if...
You're after a classic cross-country m,achine with real heritage and don't mind throwing some upgrades on it

Bianchi's Nitron 9.4 marries a lightweight composite frame to budget-minded kit to produce a rapid cross-country machine that won't break the bank. That said, it would stand to benefit from upgrades in the future, especially compared to direct sales bikes. It's decidedly old-school handling will please racing types too, if not those in search of tougher trails.

At the heart of the Nitron is a full carbon fibre frame that features all mod cons such as bolt through back end with Boost hub spacing, a tapered head tube and neat internal cable routing, plus a Press Fit 92 bottom bracket. As you'd expect for a cross-country race machine, it sits on 29" wheels and it's designed to take a 100mm fork up front, with a skinny 27.2mm post at the back.

The five-bike Nitron lineup is Bianchi's entry-level carbon fibre cross-country offering before you move up to the more expensive Methanol range that uses their Countervail carbon fibre, which is said to absorb vibrations more effectively. Even so, the Nitron gets plenty of shapely touches, with deep chainstays married to a robust bottom bracket junction and then more slender seat stays to offer up a bit of give. 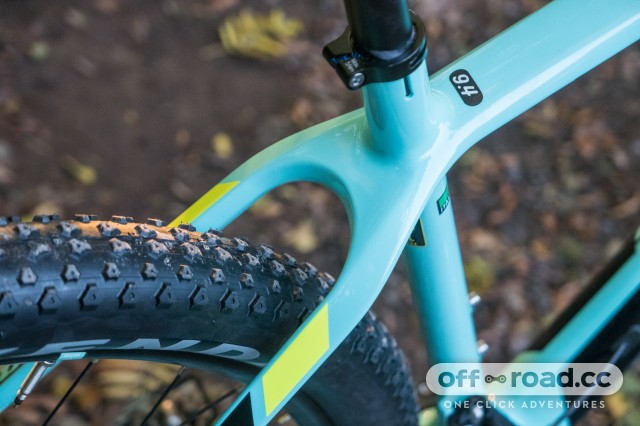 This 9.4 model is available in both a single-ring SRAM NX 1x12spd version or this 2x11spd Shimano Deore equipped model. Either way, you get a frame painted in the 'right' colour, plus a RockShox Judy Gold RL Solo Air fork up front, complete with bar-mounted lockout. 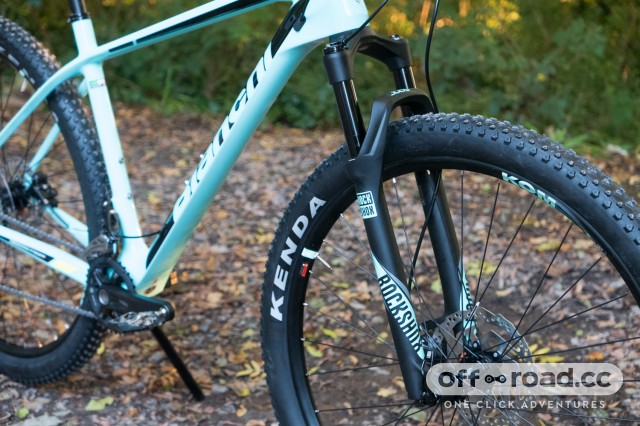 It's easy to see that Bianchi has had to make some fairly serious compromises to get a carbon framed bike at this price point, the most noticeable being the non-series Shimano M315 brakes, which we've seen before on bikes as low at £500. They work well enough but the four-finger lever is pretty clunky and there's not as much power or control on offer compared to higher rent kit in the Shimano stable. 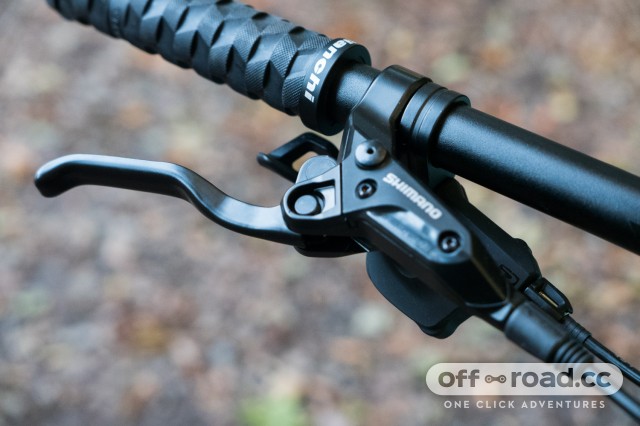 As usual with Shimano's budget groupsets, the Deore drivetrain shifts over the 11-42T cassette and 36/26T rings on the non-series crankset smoothly and without issue. We're pretty much sold on single-ring only drivetrains for most applications these days, but it has to be said that if you want a wide range with smooth, small jumps between them then there's still a place for them - and Shimano's new direct-mount side-swing mech does make front shifts less lumpy. 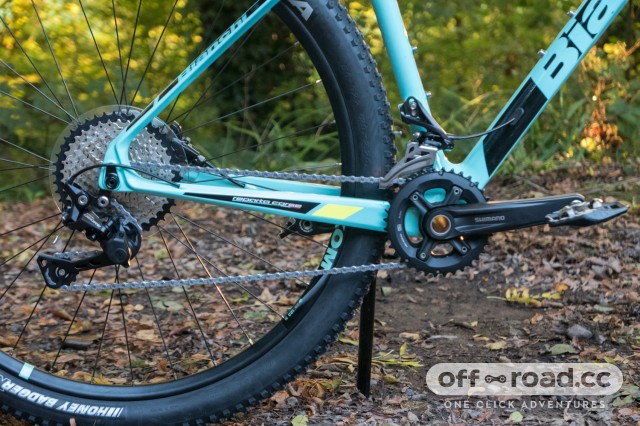 Elsewhere, there's plenty of own-brand finishing kit, with an aluminium post, flat 720mm bar and rather tiller-like 90mm stem, though the Selle Royale Seta S1 saddle is a comfy highlight. The WTB KOM i23 rims mounted on Formula hubs are also respectably lightweight and they're tubeless compatible, as are the lightly treaded Kenda Honey Badger tyres. They're not as wide as some and that gives the rubber a slightly pinched stance but it does mean perky acceleration, though don't expect too much from the tyre compound or tread in the wet or mud. 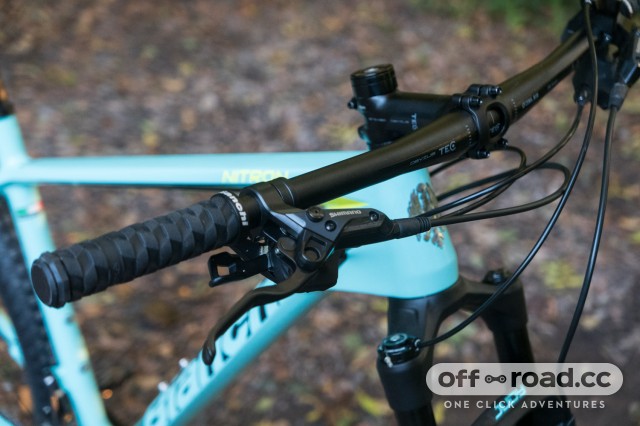 All in all, Bianchi has done pretty well to offset the obvious budget limitations. Stamp on the pedals and the Nitron reacts the way you'd hope a cross-country race bike would - you can stick your own 'moves quickly forward' cliche in here. It picks up speed well and the frame does a respectable job of not pounding your rump into dust while also now feeling like a noodle in the corners or under power. The gears snick up and down efficiently and while it's not the last word in refinement, the Judy fork manages to get you to the limits of how hard you want to be pushing 100mm of travel without too much complaint. 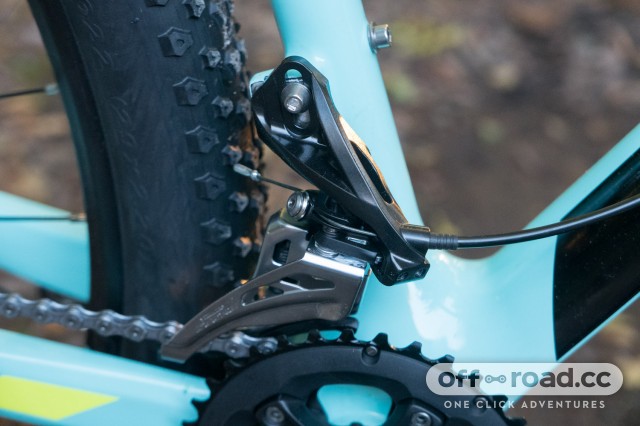 Okay, the brakes are a constant reminder that corners have needed to be cut and the all-in 12kg weight is pretty portly against rivals, though I suspect putting some of that finishing kit on a carbon diet would help here. Anyone that wants to get rad-ish will also probably be after wider bars, though they kind of fit in with the Nitron's very aggressive and fast handling geometry, which is pretty old-school with a reach of 447mm for the 19" bike we tested, though the 69.5º head angle isn't too bonkers steep compared to some. 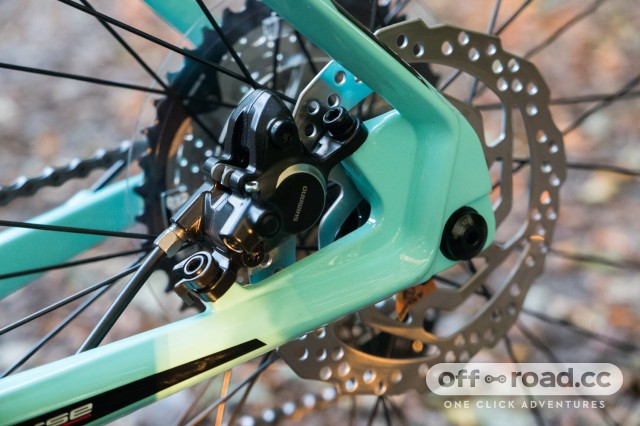 Again, it's definitely a bike for those that want to elevate their heart rate by sheer effort rather than by tackling technical trails, but it's still capable of dissecting singletrack accurately and at speed if you keep your wits about you. 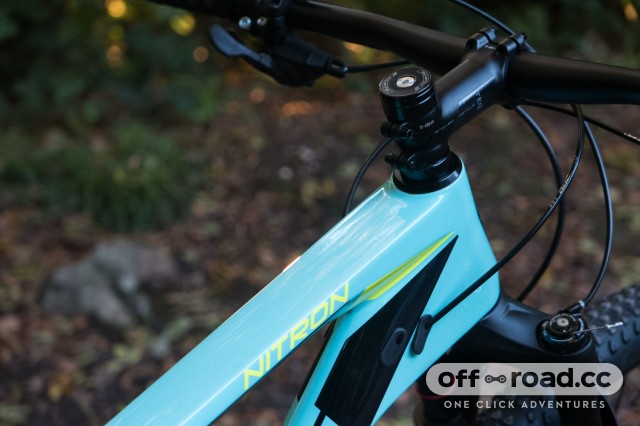 All in all, the Nitron is a good place to start if you fancy a rapid cross-country racer with heritage. To be truly competitive, it needs some upgrades to help drop weight, but it still does the job out of the box if you're after a classically handling machine for doing distance at speed.